RUGBYPASS+ Burned by Beirne: Is the All Blacks engine room coming off the rails?

By Nick Bishop
Burned by Beirne: Is the All Blacks engine room coming off the rails?
By
Nick Bishop
4 months ago
InternationalIrelandNew Zealand
7:19am, 26 July 2022 6 Comments

Ahead of a titanic July series against Ireland, All Blacks head honcho Ian Foster had a premonition of the future.

Maybe, he gave away more than he intended on The All Blacks Podcast back in May; for the first time ever in their illustrious rugby history, Foster believed New Zealand players needed to work harder on their skills and speed in order to stay ahead of the chasing pack:

“What are our biggest weaknesses? I think there are certainly some ‘work-on’ areas.

“There are two aspects that we have historically been number one in the world on.

“One is speed – and I’m talking about speed around the park and speed to do things – and the other one has been our skill level.

“Generally, All Black players have been really, really skilful, and we just think those are the two areas that other teams and other competitions are starting to catch up, they are putting a lot of effort in those areas.”

“I look at the experience last year, we had a great Rugby Championship, went really well, then went up to the UK. We weren’t able to be fast in those last two tests. We played two teams [Ireland and France] that were fast. Two teams that were really quite skilful with their forwards and their backs.”

“It’s just a little bit of an uppercut for us, really.”

You cannot imagine any previous coach of New Zealand making those comments. It has been taken for granted that, whatever their weaknesses, the All Blacks would be too fast and too skilful, for too long, for them to matter in the final analysis.

That has been particularly true in the skill-sets of their forwards, which have always been better-rounded in the aspects of play outside set-piece than their counterparts from Europe or South Africa. At least, until now. The series against Ireland will change that perception, possibly for good.

Take the second row as an example. New Zealand selections in both eras, the amateur and the professional, have been a breed apart. They have usually tended to be less bulky, more mobile and enjoy a clear advantage in running power, handling and passing skills compared to their rivals. Think Colin Meads before 1995, and Ian Jones after the professional threshold. Both could have played back-row in the modern game with ease.

The current All Blacks pairing of Sam Whitelock and Brodie Retallick is one of the two best partnerships of the professional era, sitting alongside the great Springbok alliance of Bakkies Botha and Victor Matfield at the top of the second-row pantheon. Definite signs of wear and tear appeared in the Ireland series: with their respective age profiles – Whitelock will be 35 years old by the time the World Cup begins, and Retallick will be 32 – the couple may struggle to make the required impact.

Overall, the mix of Whitelock, Retallick and Scott Barrett (who replaced the Crusades lineout chief in Dunedin) came off second best to the Irish unit of James Ryan and Tadhg Beirne. Not by a lot, but by enough of a margin to raise concerns. On attack, the raw stats looked like this:

The biggest single difference in the offensive comparison is the quality of Tadhg Beirne’s ball-carrying, which showed better evasive skills and more line-breaking potential than any of the other second rows on either side. The Ireland locks were also more effective than Whitelock and Retallick at pinching ball on the opposition lineout throw.

This is how the statistical picture looked on the other side of the ball:

The playing field is more level on defence, although once again Beirne probably presents the greatest threat in and around the tackle area.

Tadhg Beirne’s quality first came to my attention while I was preparing for Leinster’s 2017-2018 European Champions Cup semi-final against the Scarlets, the Welsh region that Beirne represented at the time. Once Beirne’s involvements were fed into to my analytical model, it emerged that he was Scarlets’ best on-baller, their best maul defender and their best counter-jumper at the lineout. In fact, he represented rather more than 50 per cent of Scarlets’ entire takeaway ability, upon which their dangerous counter-attacking game depended.

There is an excellent potted history of his attributes in this short video. Roll the clock on another four years, and Tadhg Beirne is now doing what he did for Scarlets in the emerald green of Ireland. It is rare indeed to see the hallmarks of top-quality provincial play reproduced so completely at international level, and even more so against the mighty All Blacks.

A considerable portion of Beirne’s time has been spent playing on the blindside flank, and his second wave ball-carrying in the pivotal test in Dunedin was majestic, right from the opening whistle:

Ireland are in their tight-knit diamond phase shape, with forwards to both sides of number 10 Johnny Sexton, sitting just behind the tip. Josh van der Flier makes the initial bust, then Beirne is on hand to make the big break downfield off lightning-quick ball on the following phase.

It is the short, nuanced pass that does the damage, putting Tadhg through the hole in between Sam Cane and Ofa Tuungafasi – and the Munster second row’s pace does the rest. Later in the sequence, he is on hand to bring the ball back towards the New Zealand posts, on the phase prior to the score by Andrew Porter.

Beirne’s effectiveness on the second wave carry was a consistent theme. After a long break down the right by Bundee Aki and Peter O’Mahony, he was ready to take a pass off Sexton’s shoulder. The game awareness is still working: he drops back a couple of steps to make Van der Flier a real passing option and mask the short-ball threat: 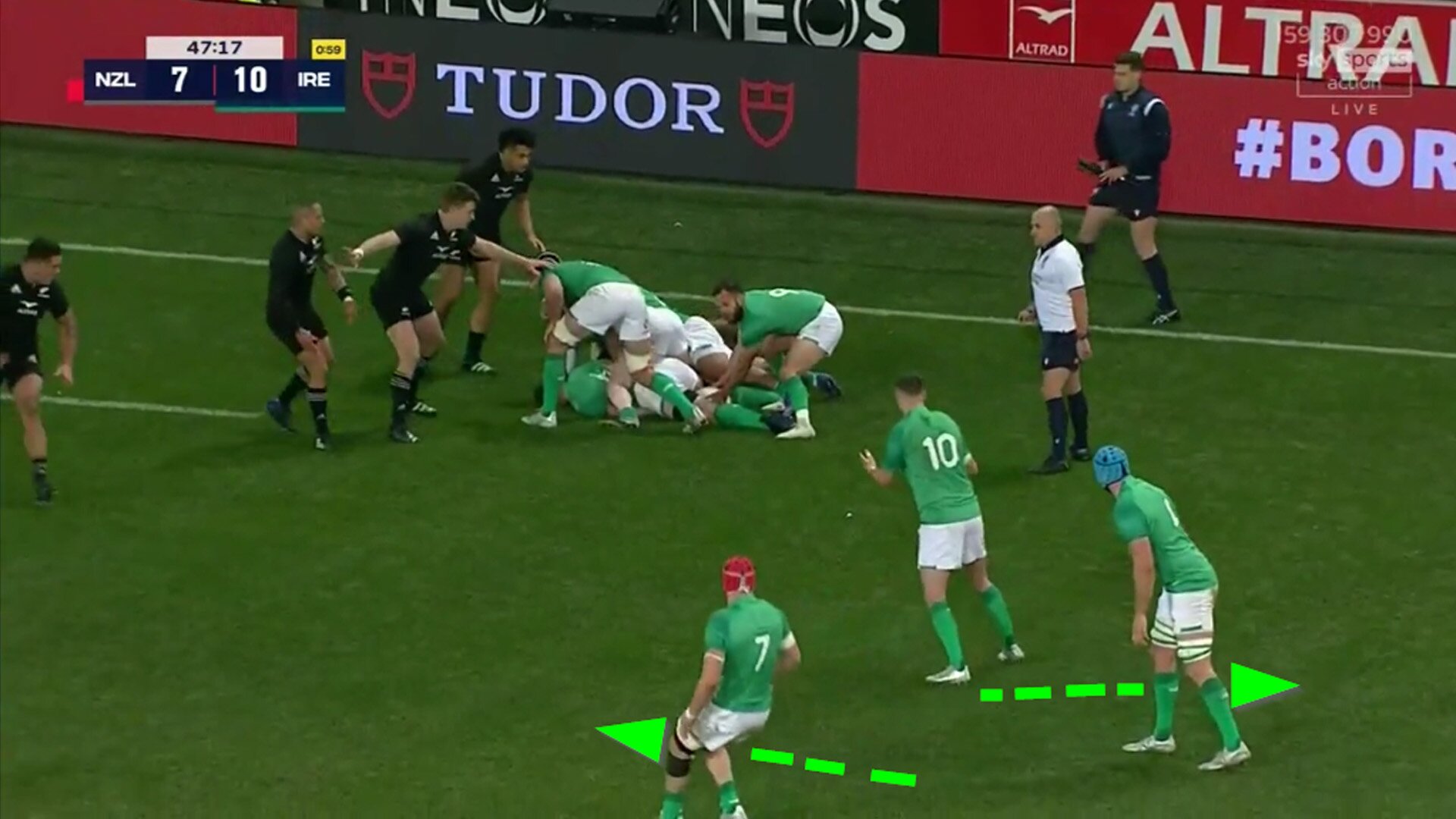 Later in the second half, he created space for a bust by his second-row comrade James Ryan with a neat tip-on pass:

Beirne was also central to Ireland’s defensive plan to defuse Aaron Smith’s long passing from the base of the ruck, which had proved to be so productive for the All Blacks at Eden Park. In the week between the final two tests, Ireland became considerably bolder in their attack from the fourth defender spot: 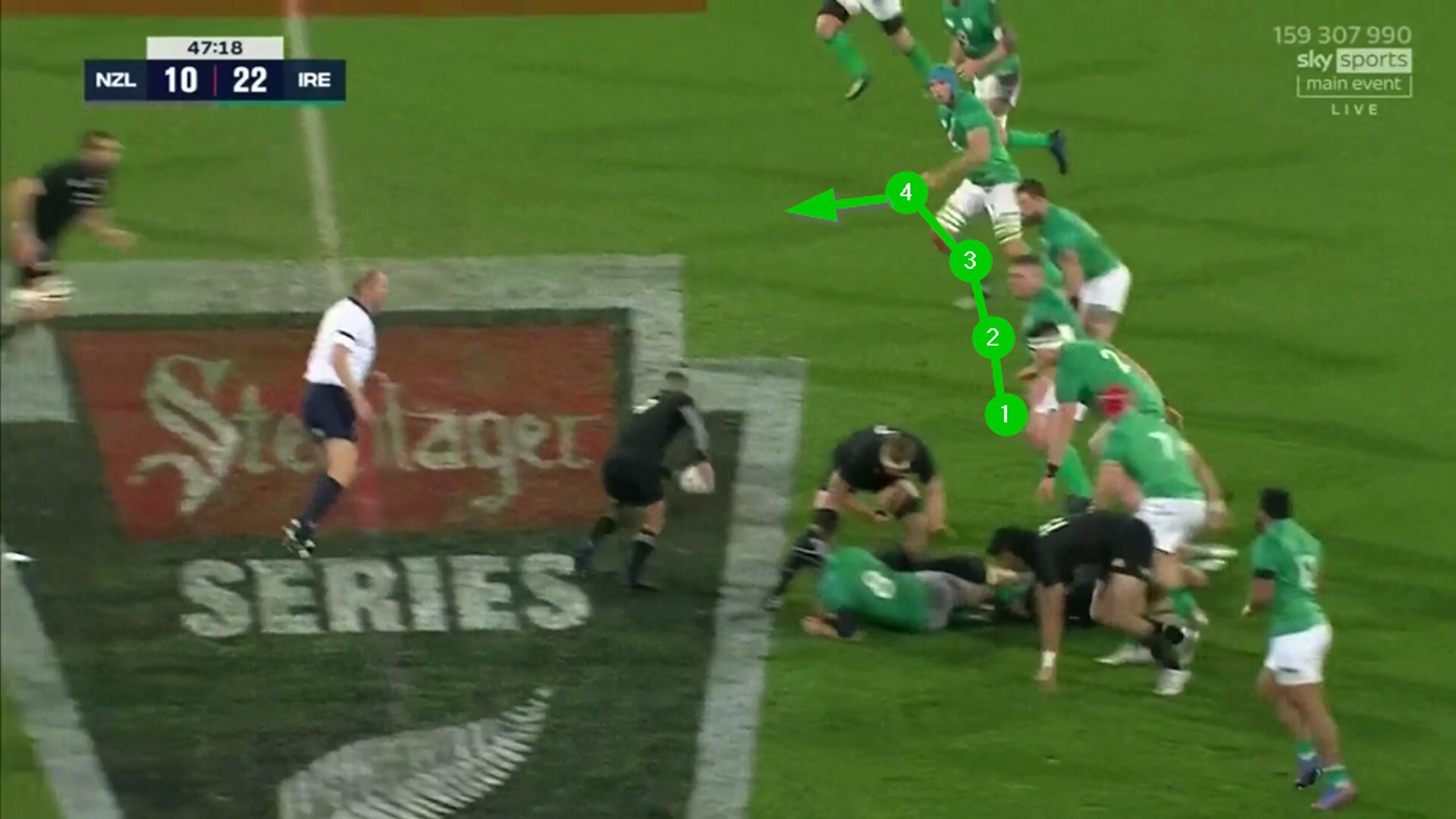 In the first example from Dunedin, Beirne is making the chop tackle on Brodie Retallick and Caelan Doris is in over the ball immediately to win the turnover. At the Cake Tin, the Munsterman is even more direct, jumping straight off the line to make an interception before the pass ever reaches its target.

It was one of four turnovers Tadhg Beirne generated in a frenetic last half hour of the game. The other three occurred on the ground at the breakdown: 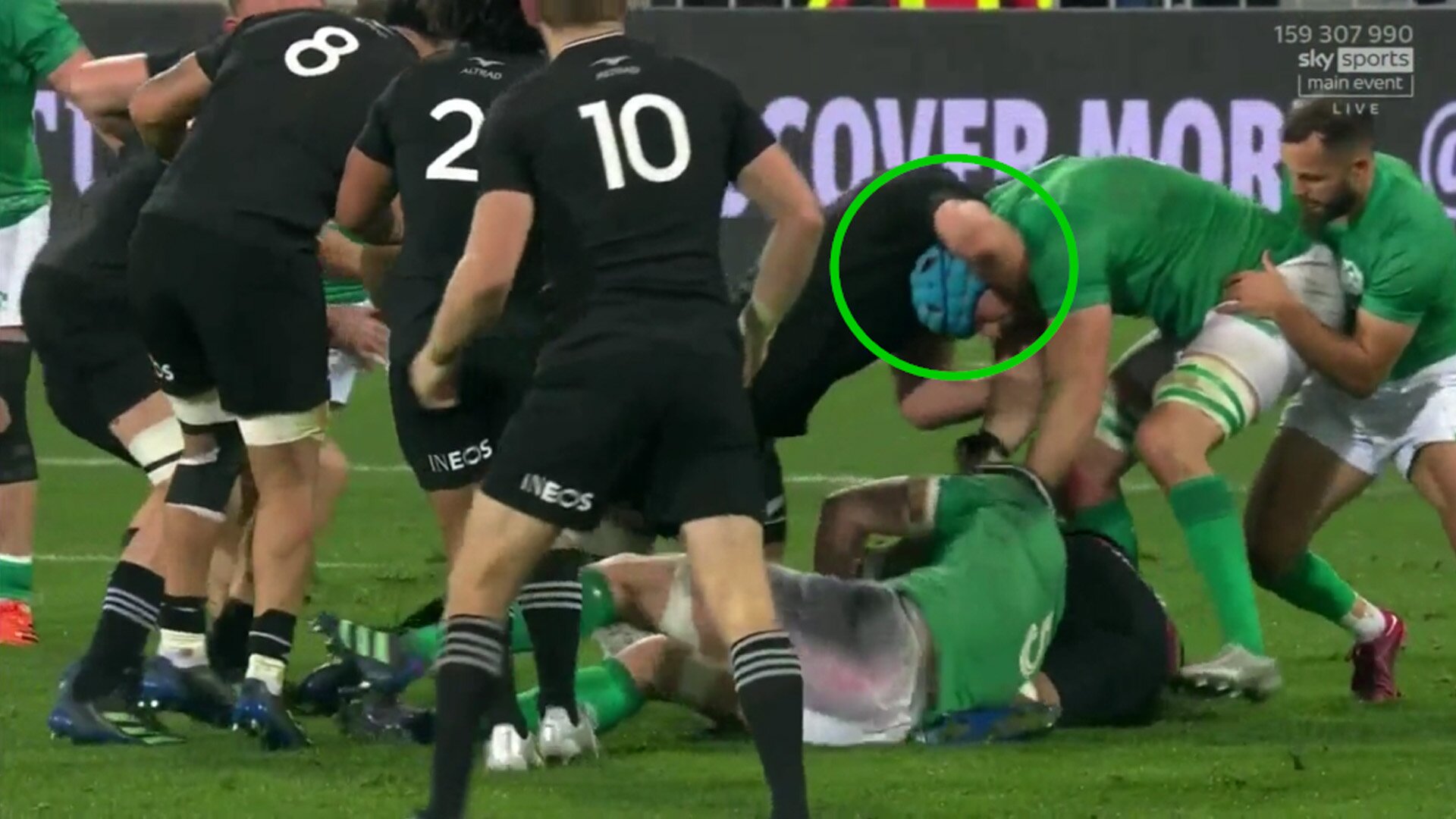 When teams begin to identify threats to the ball at the tackle area they often over-compensate, with Sam Whitelock penalised for a neck roll on Beirne in the second instance.

The final example illustrates the effectiveness of the high-quality hybrid number 4/6 which New Zealand used to produce on such a regular basis. Tadhg Beirne makes a 15-metre sprint to close the gap to the back outside him (Conor Murray) in the 73rd minute of the match, and finishes with a game-changing turnover when he gets there, despite the attentions of David Havili and replacement lock Tupou Vai’i:

His contribution in the tight was also critical to Ireland’s two close-range tries from the driving lineout: 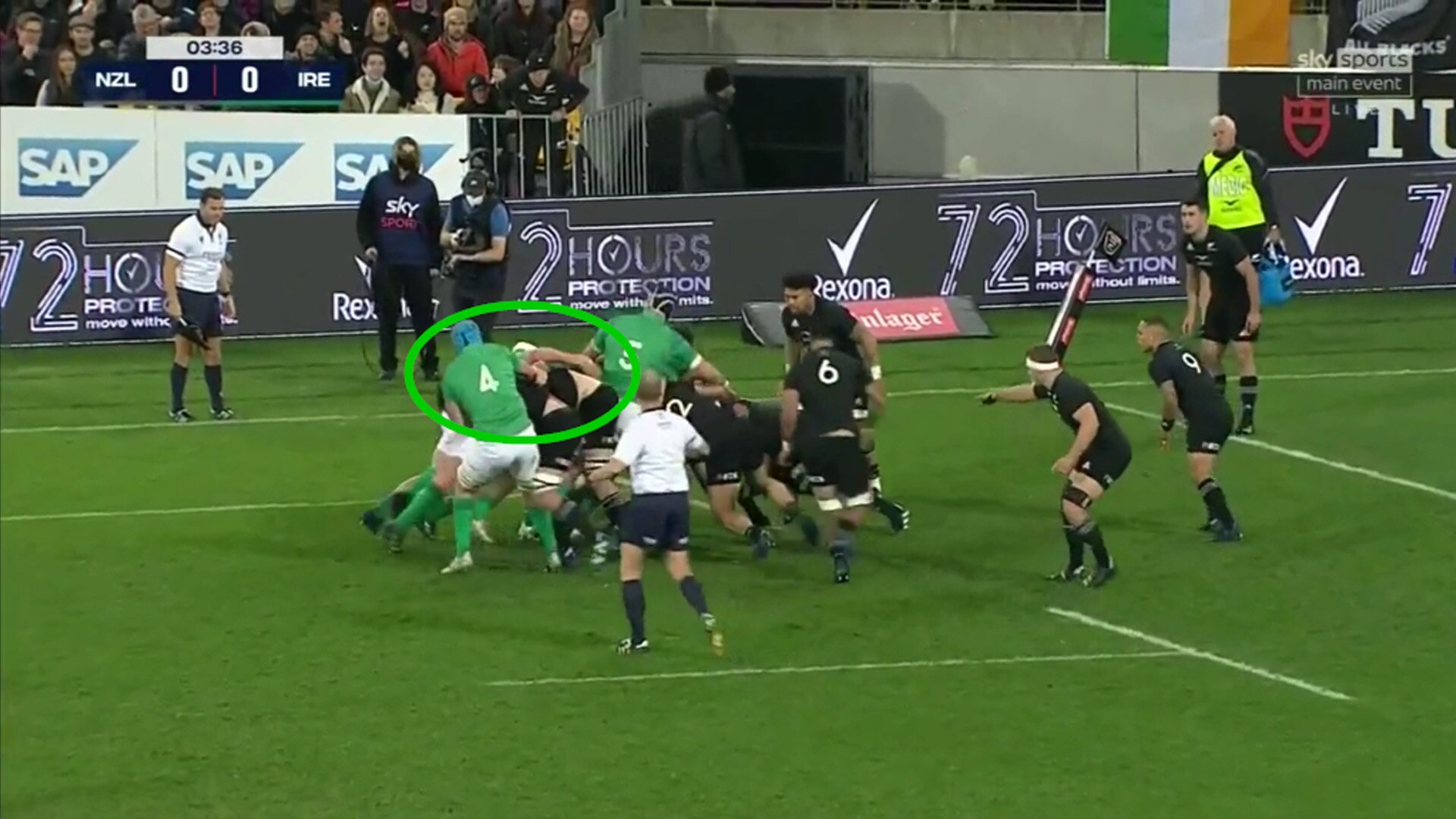 In both examples, Tadhg Beirne’s sole purpose on the right side of the receiver (Ryan) is to peel away the primary maul defenders opposite him – Retallick and Whitelock in the first instance, Whitelock and Akira Ioane in the second. As soon as they are removed, the drive jolts forward with new momentum and a try follows in short order.

The selection of tough, mobile second rows with great aerial and handling skills has always been a point of difference in New Zealand’s favour, in both the amateur and professional eras. Think Colin Meads, think Robin Brooke and Ian Jones. Occasionally they have suffered in the tight, much more often they have profited from their increased cohesion in the open.

In the recent series against Ireland, the second row cards fell out clearly in Ireland’s favour – not by a huge margin, but clear nonetheless. As Ian Foster feared, teams in the north have caught up with this area of Kiwi forward advantage. They have the big men who can run, handle and defend as well as they can attend to the core tasks of tight forward play – men such as Tadhg Beirne and France’s Cameron Woki.

Remember those names, they will be in lights at the World Cup in France 2023.