RUGBYPASS+ Has Ian Foster reached the tipping point as All Blacks coach?

It is over 20 years ago that Malcolm Gladwell published his bestseller The Tipping Point. In the book, Gladwell explored how a succession of little actions, made at the right time, in the right place and by the right people can create an unstoppable trend. It is “that magic moment when an idea, trend, or social behaviour crosses a threshold, tips, and spreads like wildfire.”

The most fervent of New Zealand rugby supporters will argue that the national head coach Ian Foster has already passed that point, many moons ago. Thus far at least, that idea has not caught hold in the minds of the decision-makers who matter at NZ Rugby HQ.

Their view may well change if Foster’s All Blacks lose to Ireland in the third Test in Wellington, and drop a home series to the men in emerald green for the first time in their history.

Recent New Zealand rugby history is full of uninvited firsts right now. The second test defeat against Ireland in Dunedin represented the first time in the professional era that a coach of the All Blacks has fallen below the magical win rate of 70 per cent.

To Kiwi supporters who grew up in the era of the three wise men, Sir Graham Henry, Sir Steve Hansen, and king-maker eternal Wayne Smith, that is unacceptable. New Zealand teams in the golden years from 2004 to 2019 won over 85 per cent of the games they played.

There is a big question about the quality of New Zealand coaching at national level. Henry, Hansen and Smith were three of the finest coaches the rugby world has ever seen, and all had national head-coaching experience before they formed a holy trinity in the All Blacks – Henry and Hansen with Wales between 1999 and 2004, Wayne Smith with New Zealand at the turn of the millennium.

They were backed up by a raft of assistants who were the leaders in their respective fields at the time – Mick Byrne in the kicking game, Mike Cron at the scrum, and most important of all, Gilbert Enoka in the area of mental skills. John Plumtree, Scott McLeod, Brad Mooar and Greg Feek are not at the cutting edge of the game, at least not in comparison to that group.

One of the main tasks of the brains trust is to develop momentum from one match to another, and build on progress made with back-to-back wins. If you win one week and then lose the next, especially against the same opponents, that progress tends to be washed away. The New Zealand coaching staff came up with some excellent ideas in the first test on attack, but there were no backup options when Ireland inevitably replied with counters of their own in Dunedin.

One of the main attacking ideas at Eden Park was to use the length and speed of Aaron Smith’s pass from the base of the ruck to hit the outside forward in a three-man pod. Defences generally like to close up and deny space from the third defender in, but the little maestro’s deliveries hit the soft space outside the rush.

This provided the platform for the first New Zealand try of the game: 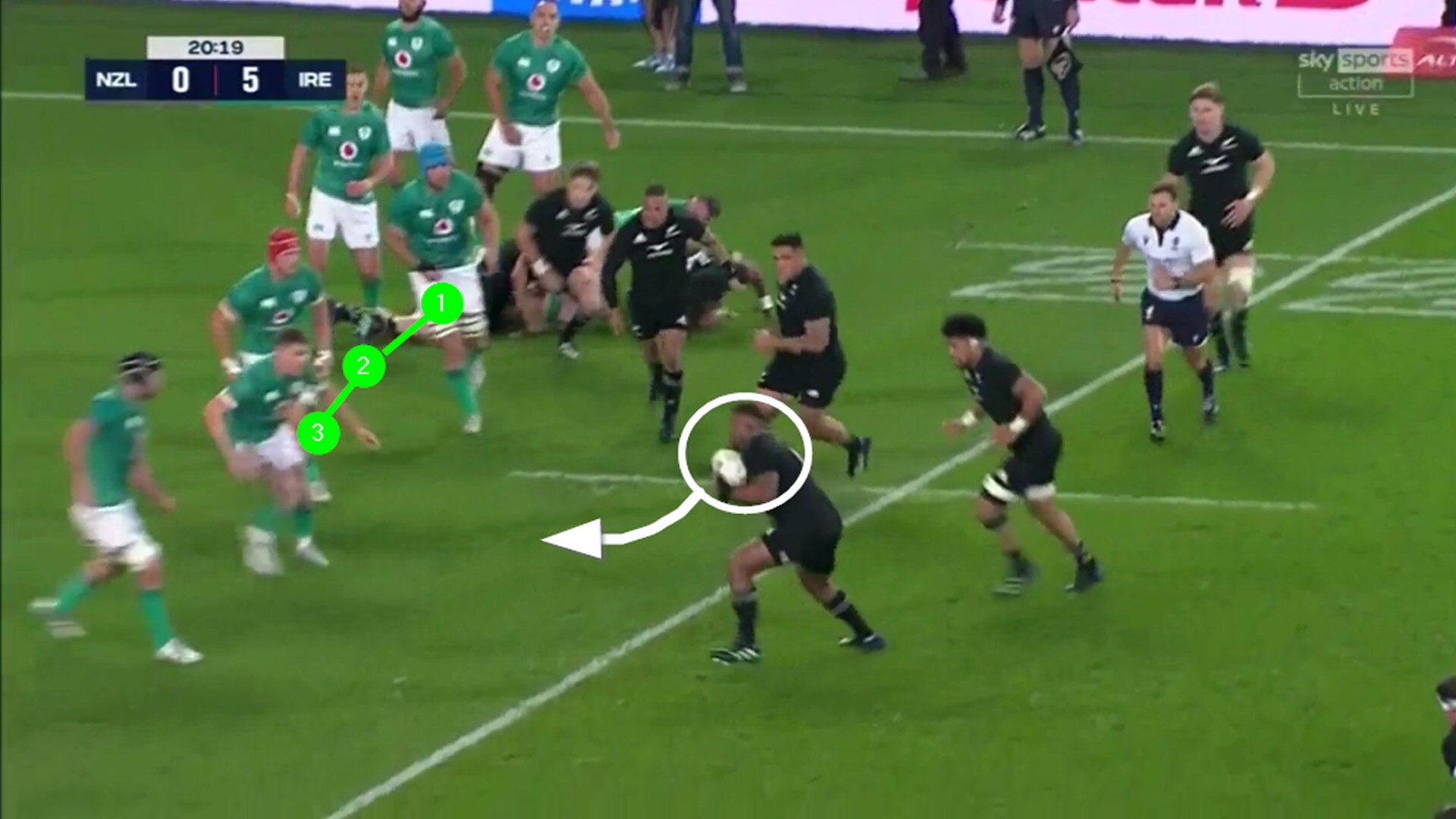 On the first phase back in from the side-line, the length and accuracy of Smith’s pass enables George Bower to engage the fourth Irish defender, and that means lightning-quick sub-two second ball from the ruck.

On the following play, the man called ‘Nugget’ beats the rush from third defender with even more significant consequences: 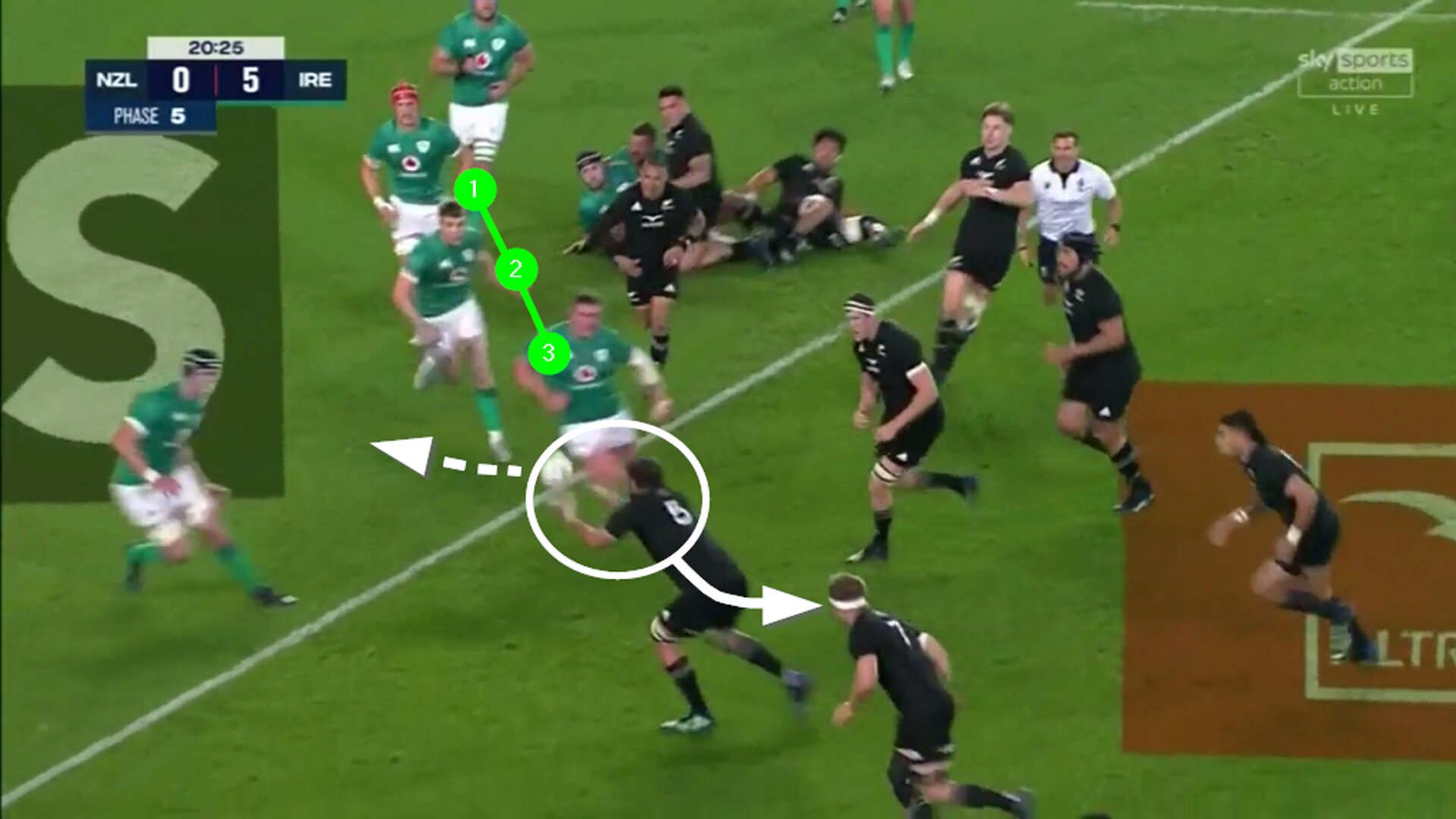 Number 5 Sam Whitelock has a nice choice when the pass from Smith arrives – he can either take the ball up into the soft space beyond Tadhg Furlong or he can pass behind to Rieko Ioane. He picks Rieko and that creates room for Leicester Fainga’anuku to make ground all the way up to the Ireland goal-line.

What happens next? You guessed it. Another outstanding pass from Smith beyond the third defender to create a score for Jordie Barrett:

The shot from behind the posts illustrates just how completely the third Irish defender (Tadhg Beirne, in the blue hat) is suckered to the inside, opening a yawning gap for Barrett to plunge through and dot down:

New Zealand’s fourth try of the game derived from much the same source:

Smith hits Brodie Retallick on the outside of the three-man pod and he gains easy metres while consuming two tacklers at the ruck. Those two defenders are still being held down on the deck when Nugget realizes that the gap between the two Irish guards at ruck-side has presented an opportunity to break straight up the gut. One kick ahead and one Ardie Savea swan-dive later, the All Blacks had built a lead they would never relinquish.

At the Forsyth Barr stadium one week later, it was quite clear early on that Ireland had both diagnosed and fixed the problem: 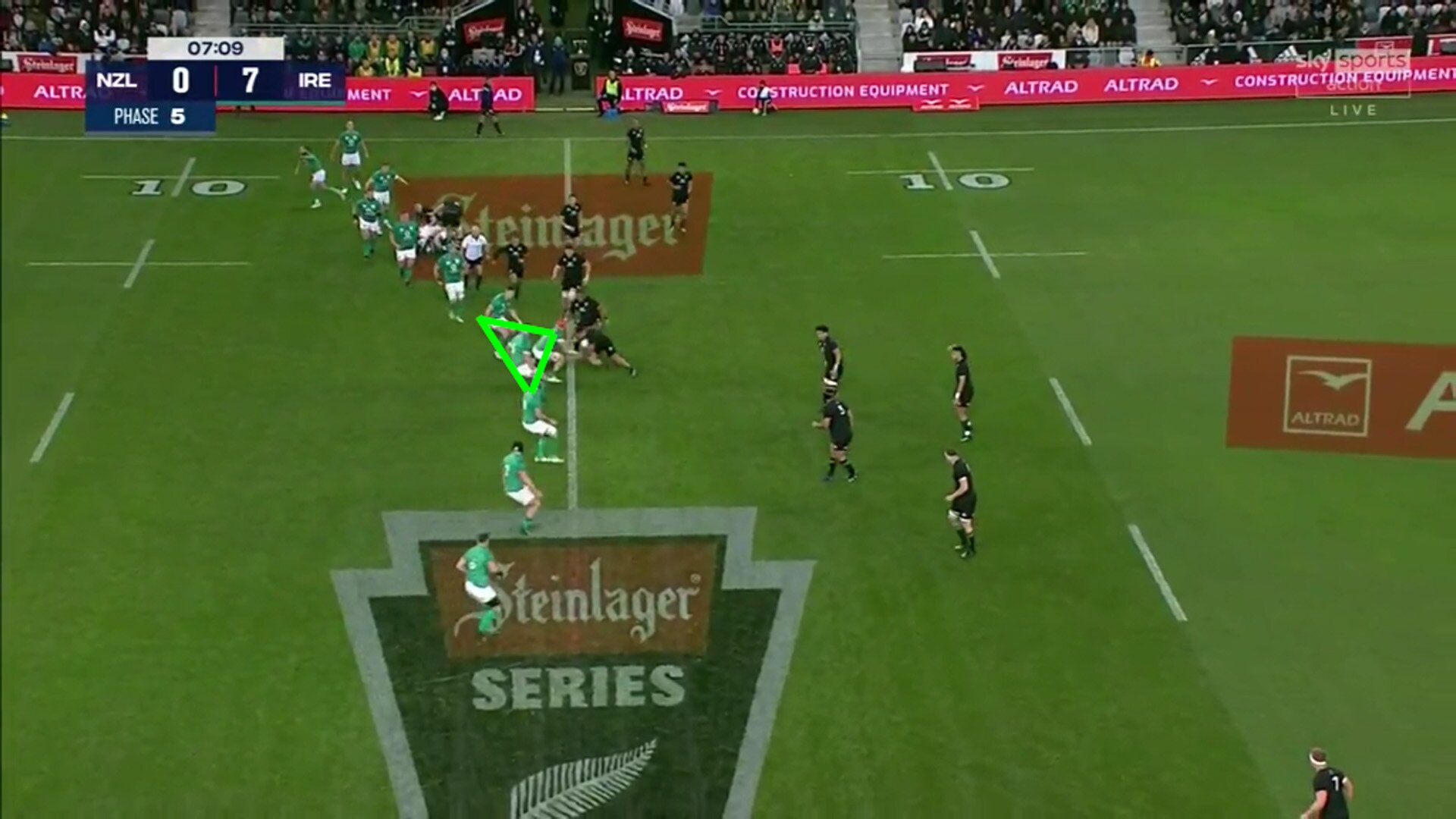 On this occasion, Ireland are set up to rush off the fourth defender (Josh van der Flier, in the red hat), and that means slower ball and no overlap on the following phase. In fact, there is a greater chance for Peter O’Mahony to turn over the ball at the tackle, so the odds have already shifted slightly in favour of the defence.

The turnover, and the coaching turnaround which accompanied it, was complete a few minutes later:

Smith hits Retallick on the outside of the three-man pod, but Beirne is in perfect position to close him down quickly and create the jackaling opportunity for No 6 Caelan Doris. That meant a midfield goal-kick for the unerring Johnny Sexton, and a 10-0 scoreline to the men in green.

This all happened with 15 men on the field for both sides, and it created a tactical problem for the All Blacks which they never managed to solve:

First Josh van der Flier easily reads through on to the circle ball from Retallick back to the two Barrett brothers, then Quinn Tupaea is hit hard on the next phase and stopped in his tracks.

It returned the ball firmly back into New Zealand’s court. Would play remain under the direction of Aaron Smith, even if it meant he was forced to kick the ball away? That was the outcome in this sequence, a couple of phases later. Or, could the play-making emphasis be bounced one spot further out, to Beauden Barrett at number 10?

New Zealand has been careful to deploy Barrett in the role that suits him best in the recent past. He often drops to the backfield alongside his brother on defence, and the coaching staff do not want him as the main decision-maker on attack – at least, not while play remains in structure. As an instinctive attacker in space or in a broken field, Barrett sits at the very top of a very impressive heap. He is the world leader. As a passer or kicker with a set defence in front of him, he drops to the level of mere mortal. That is why the Blues pick Stephen Perofeta at fullback, to do the play-making for him.

It soon became obvious that the All Blacks had no such recourse. They made mistakes on no less than five first-phase plays when they shifted the ball into midfield, all of which resulted in turnovers.

With Savea off the field and paying the price for Angus Ta’avao’s red card, the ball-carrying burden shifted on to Quinn Tupaea at second five-eighth, and he ran into an unyielding brick wall of Irish choke tackles:

The symbolic turning point arrived in the 65th minute:

First, Rieko Ioane is held up off the ground and that means slow ball on first phase. Then, Folau Fakatava’s impersonation of the Nugget bullet pass falls at the feet of Aiden Ross. The fourth defender (Peter O’Mahony) is ready to swoop, delivering a perfect 50/22 kick back into the New Zealand red zone for the turnover lineout. That was game, set and match to Ireland.

Questions about coaching, preparation and tactical thinking on the hoof abound after a memorable comeback win by the men in green at Dunedin – their first-ever victory on the sacred soil of Aotearoa. The tactical trends at the breakdown, at the scrum and in the balance between All Black attack and Ireland defence in Auckland were all reversed in the South Island.

Aaron Smith was a hero at Eden Park, but when Ireland shut him down at the Forsyth Barr stadium, the All Blacks had nowhere to go in attack. Does that mean a recall for Richie Mo’unga? Where is the play-making help from fullback, or second five-eighth if Beauden Barrett plays 10? Can his brother Jordie be profitably shoehorned into number 12?

In truth, these questions are as current, and no closer to resolution than they were when Ian Foster took over the reins, and that has dragged him ever closer to the edge of the cliff. One more push, and he may fall before the World Cup ever starts in France.