RugbyPass May Player of the Month - Alex Goode

As part of a new series, RugbyPass will be scouring the world for the most in-form players that the northern and southern hemispheres have to offer and picking a global player of the month. Each winner will receive a donation of $100 to the charity of their choosing, with their form on the field not only helping their club or country, but also a cause close to their heart.

Two of the three northern hemisphere club seasons have now come to their conclusion over the last month, as the Gallagher Premiership final was decided on June 1st and joined the Guinness PRO14 in its offseason, with only France’s Top 14 still in action for a few more weeks.

Plenty of Leinster players put down a marker in their Heineken Champions Cup final and subsequent Guinness PRO14 triumph over Glasgow Warriors, with Cian Healy and Garry Ringrose prospering for the Dubliners. The Crusaders continued to impress in Super Rugby, too, with Richie Mo’unga unsurprisingly among the standout players.

That said, the RugbyPass Player of the Month award for May goes to Saracens’ Alex Goode, who has proven himself pivotal in that European final victory, as well as delivering another Twickenham appearance for his club with a consummate display in the Premiership semi-final against Gloucester. The final itself fell just outside of the month of May, but he was equally impressive in that fixture, diffusing aerial bombs, holding up would-be tries over the line and releasing Saracens’ threats out wide in attack. 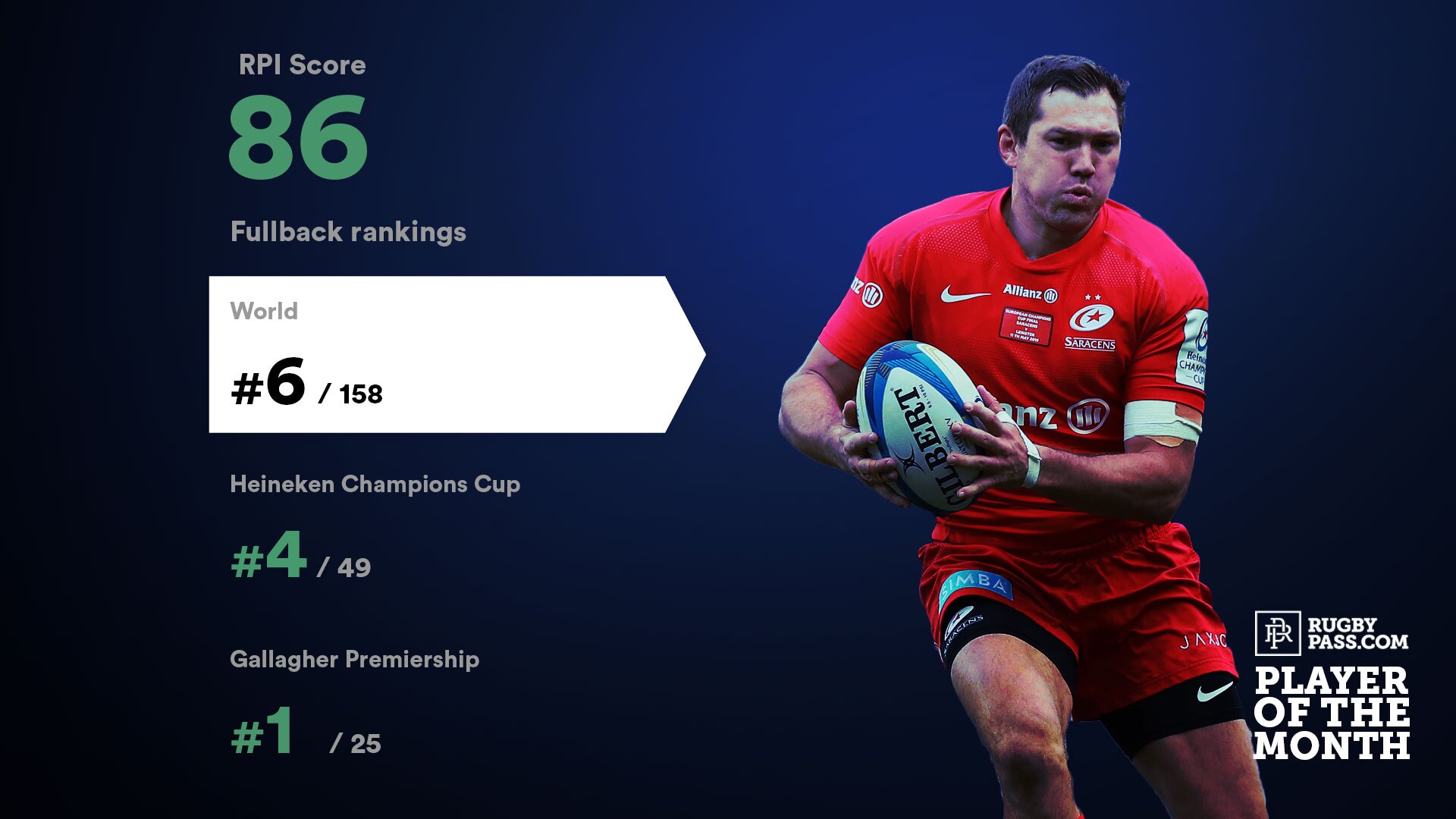 His positive contributions to Saracens on the pitch have no limit, with the versatile full-back adding to the defensive, attacking and transition games, thanks to his well-rounded skill set and confidence to back his decision-making. With Goode’s ability under the high ball and ability to relieve pressure with the boot when the counter-attack isn’t on, too, the rest of the Saracens squad are bolstered by his security at the back.

There’s not too much more Goode could have done over the final months of the season to warrant an international call-up and his Rugby World Cup fate is now in the hands of Eddie Jones.

Regardless of that decision, the 31-year-old is a more than deserving winner of the latest player of the month award, with the full-back opting for Nordoff Robbins as his chosen charity, who use music to improve the lives of people with physical disabilities, emotional challenges and life-limiting illnesses.

Watch: Mark McCall and Brad Barritt speak to the press after the Gallagher Premiership final

RugbyPass May Player of the Month - Alex Goode