END_OF_DOCUMENT_TOKEN_TO_BE_REPLACED

Ahead of the start of the TikTok Women’s 6 Nations in three weeks, England head coach Simon Middleton will name his training squad on Monday.

Following a successful autumn campaign and a winning record stretching back 18 games, England will go into the championship hoping to add another five victories to that running total. With limited international opportunities remaining in this Rugby World Cup year, it is also a crucial window for the likes of Middleton to offer experience and focus on key areas such as his front row, the half backs and kicking options, and the balance of his midfield.

Looking at the forwards, in Maud Muir England have a player that can not only prop on both sides of the scrum but who is also being honed as a hooker option, at least in terms of line out throwing. If that does not secure the Wasps youngster a seat on the plane, who knows what will? The next few weeks will no doubt be another key step in Muir’s international journey.

An expected returning face should be that of Harlequins’ Shaunagh Brown. Left out of the autumn campaign, Brown has never been short on power but her work-on has been her scrummaging technique. Handily, at Quins she has been able to call on a British and Irish Lion in the form of Wales legend and club scrum coach, Adam Jones. Those evening classes perfecting the famed dark arts should see Brown take her place alongside the likes of Muir, Sarah Bern, Vickii Cornborough, Bryony Cleall, Amy Cokayne and Lark Davies.

The rest of England’s pack also remains an area of strength. Sarah Hunter is Middleton’s captain, by example and experience, with 130 caps behind her and in the second row engine room, Zoe Aldcroft is the girl-next-door style World Player of the Year who is a proven match winner. 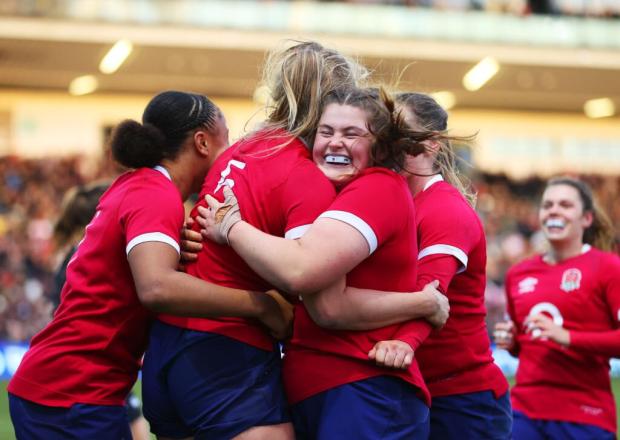 Hunter’s role as number eight is not in question, albeit the main challenger is Poppy Cleall who could also be a potential successor or stand-in with the armband, as she was against New Zealand in the second test in November. That leadership opportunity allowed Cleall to demonstrate her encyclopaedic knowledge of rugby’s ever-nuanced law book, an advantage in dialogue with officials that will be seen as a key attribute, alongside her class as a player.

From the stalwart world champions of Fleetwood, Packer and Matthews to the fresher faces of twice capped Sadia Kabeya, whose stock is only rising, England are in rude health across the back row.

The biggest headline of Monday’s squad announcement could come at scrum-half. While Eddie Jones seems determined to look the other way while a player like Danny Care continues to be in rich form, Natasha ‘Mo’ Hunt will be hoping that Simon Middleton is prepared to invite her back into the mix.

Hunt missed last year’s Women’s 6 Nations with an ankle injury but was then offered a chance to become a double Olympian with Team GB Sevens. A rigorous and committed period of rehab and training saw her take the field in Tokyo last August, only for the women to come away with a second fourth place at an Olympics, the cruellest of finishing positions.

Hunt returned to Gloucester Hartpury where she has led the side this season and been in superb form. She was not part of England’s autumn having believed to have requested some time away from the programme but as the world’s leading kicking scrum-half, Middleton could do well to consider a recall for the World Cup winner with just seven months to go until the big dance in New Zealand, if she’s ready to return. The competition with incumbent Leanne Infante and fresher faces of Lucy Packer and Ella Wyrwas would no doubt be fierce, while Claudia Macdonald sits out with injury.

While England’s men appear to be in an endless era of midfield uncertainty, Middleton will be hoping that the return of Emily Scarratt to Loughborough Lightning colours last week will enable him to sure up his preferred 13 option for the Red Roses. Scarratt is England’s primary goal-kicker and provides that tactical option too.

Women's Lions: A roar of approval

Pulling on a Lions jersey has been one of the greatest honours in the men’s game since 1891. But what about a women's tour?

In November, having intimated that Scarratt was effectively irreplaceable, Middleton deployed the Harrison-Rowland-Aitchison 10-12-13 combination, a line up that is arguably three fly-halves strong. Harrison is Saracens’ first choice 10, Rowland adept at 10 or 12 and Aitchison has played 10, 12 and 15 just this year. All three can kick. It proved to present considerable threats and, unlike a Manu-less men’s team, showed that life without ‘Scaz’ is more than bearable.

The one thing missing was a dose of physicality, particularly in an era that seems to have moved beyond Amber Reed and her unfortunate periods of injury. One such solution could be a look at Gloucester Hartpury’s Tatyana Heard, last capped three years ago, who could bring that direct style and offload game to allow Scarratt some space. That could ensure England maintain their reputation as the full package. The grit to do the tough stuff with the finishing flare to inflate the score line.

England will go into the TikTok Women’s 6 Nations as favourites for the Grand Slam with France as their nearest rivals. The championship kicks off on 26th March, rolling through April with a Super Saturday finish on the 30th as the Red Roses take on Les Bleus away in Bayonne.