The latest reports out of the New Zealand Herald give a strong indication of how the future of New Zealand rugby may look, post the current global epidemic.

Super Rugby is already set for a change next year but we could be on the precipice of a massive reconfiguration of the game. The international flavour may be leaving the competition, but the trade-off would be a potentially more competitive playing field – as well as the potential introduction of some Pacific flair.

What should fans expect from the new competition?

Bill Beaumont will serve a second term as the chairman of the World Rugby board.

“We don’t want the Brazil model where all your top players are in clubs offshore,” an NZR official revealed to the Herald earlier this week. “We’re determined to keep as many of our All Blacks here as we can.”

The first is that NZR won’t be significantly altering their current policy that requires a player to be contracted with a New Zealand club in order to be selected for the All Blacks. The second is that the new competition is expected to bring in at least similar income to Super Rugby.

Top All Blacks like Brodie Retallick and Sam Whitelock have been allowed to spend a season or two outside New Zealand and earn some quick cash but 95% of All Blacks will still be expected to play their club rugby in New Zealand.

Of course, the lure of the black jersey is only so powerful; NZR won’t be able to retain their top players if the money on offer overseas is that much better than what’s available in New Zealand.

NZR have been doing a good job of stemming the tide and it’s hard to say whether the global coronavirus pandemic will increase or decrease departures. Foreign clubs have possibly been hit even harder than New Zealand Rugby by the global suspension of matches but even if the contracts they’re able to offer decrease in the future, Kiwi players who have lost income this year (i.e. all of them) may look for a short term top up by heading elsewhere.

There’s also the potential emergence of a new Japanese club competition on the horizon which would create another competitor for New Zealand’s players.

If NZR are to have any hope of keeping talent locally based then a Super Rugby replacement must at least maintain current levels of income, if not increase them significantly. That should be entirely possible, if the rugby on offer is the best on the world and the competition’s owners are able to market it globally.

Build it and they will come – a global audience, that is. @TomVinicombe gives his take on what a new set-up could look like in New Zealand. #AllBlacks #SuperRugby #Mitre10Cuphttps://t.co/MUBkJ3A7OW

The comments out of NZR also show that despite New Zealand clearly treating Test rugby and what’s best for the All Blacks as the most important thing on the calendar, that won’t be at the expense of the lower-tier competitions.

Coaches and administrators in NZ have often suggested that having every player locally based improves the national side’s performances but by winning last year’s World Cup, South Africa showed that following the ‘Brazil model’ wouldn’t severely undermine the strength of the All Blacks.

Despite all that, it’s unlikely we’ll see NZR take a similar approach to the All Blacks’ selection criteria – which is fantastic for the local game.

With that out of the way, how could a new competition fit into the calendar?

According to the Herald, New Zealand will field between five and eight sides with one more team potentially based in the Pacific Islands.

Phil Gifford suggested that five of New Zealand’s sides will be the existing Super Rugby franchises but if more teams are to be based in the country then these franchises will need to be diluted heavily.

RugbyPass had already started compiling teams based on geographically sensible provincial combinations but that was based on a hypothetical ten-team competition.

Assuming a lower number of teams, the logic still remains the same: franchise locations should be based primarily on population and location (two provinces on opposite sides of the country obviously shouldn’t be clustered together in the same team).

Currently, the Blues and Chiefs have significantly larger talent pools to pick from compared to the other three franchises:

It wouldn’t be unfair expecting these franchises to produce strong teams even if they lose some of their current provinces. Auckland boasts arguably the most competitive localised schoolboys’ tournament in the country while the Chiefs current region includes five of the Super 8 competition’s participating schools.

Admittedly the Blues have struggled over the last decade but the raw resources are all there with plenty of the regions’ talent heading elsewhere and thriving.

The most logical move would therefore see the Chiefs and Hurricanes splitting into four relatively even sides with the Blues also restructuring.

Assuming seven New Zealand teams and one Pacific side, the new franchises would likely resemble the below:

Waikato and Bay of Plenty have had a strong relationship throughout history which could be preserved with a little bit of manipulation but if parity and geographical location are viewed as the most important factors (which, may well be the case to maintain the competition’s longevity) then the above set-up makes the most sense

With just six New Zealand teams, however, the Bay of Plenty would likely remain with their current Chiefs partners:

In every scenario, the Southern side is always going to struggle to compete with their rivals but there’s simply no way around it. 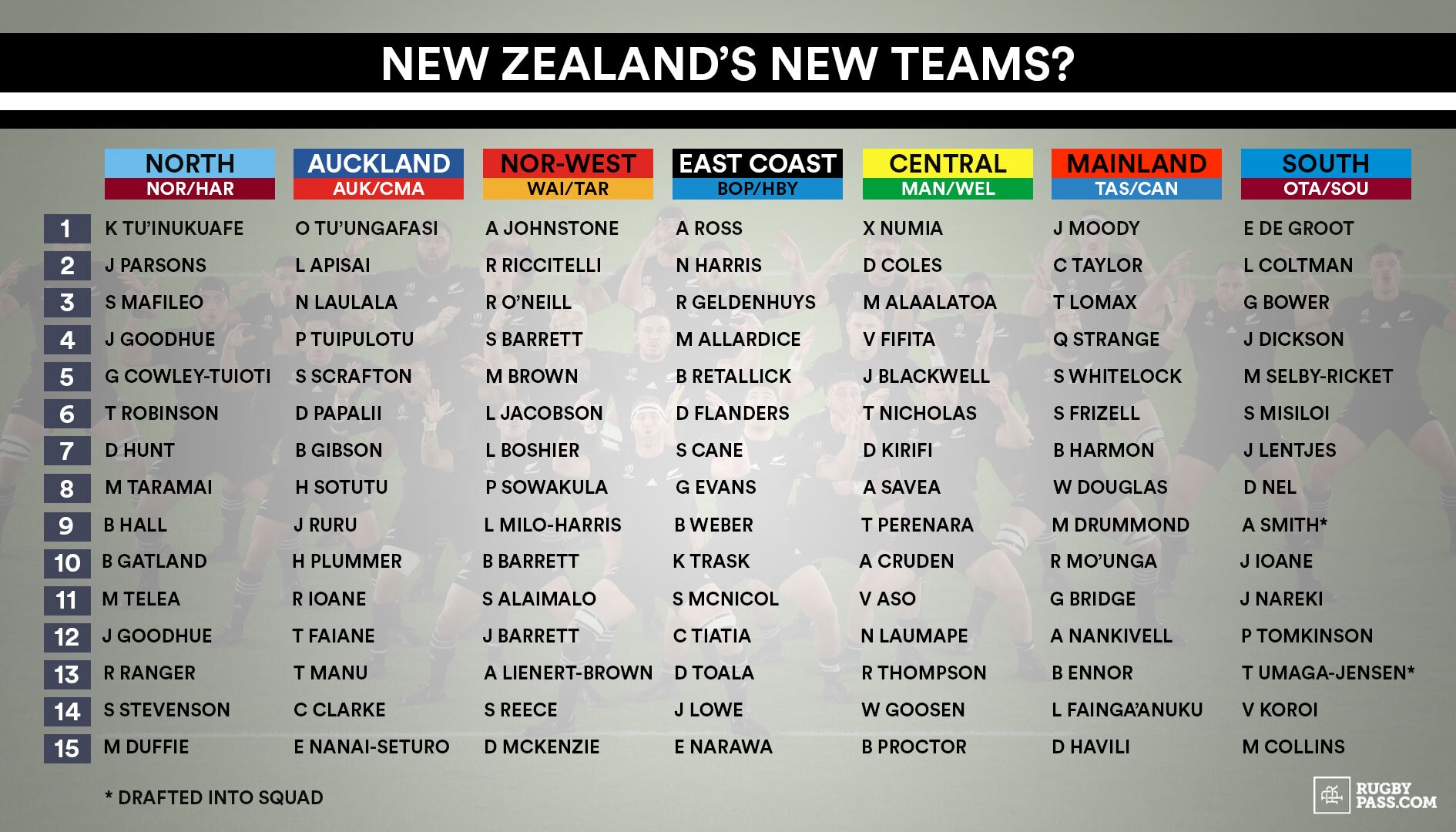 Restructuring the current Super Rugby sides is certainly possible but the new competition’s structure is arguably a more challenging conundrum.

If New Zealand creates extra franchises then the lines between the Super Rugby replacement and provincial rugby become harder to see.

Year after year, it’s becoming more and more clear that the provincial competition, which was once New Zealand’s flagship tournament, is waning in significance. There are few All Blacks involved and even some Super Rugby players have, in the past, opted to play in the Top League over staying in NZ for the provincial season (that won’t be the case this year as the Top League kicked off in January and has now been cancelled).

Scrapping the current Mitre 10 Cup altogether and extending the Super Rugby substitute could potentially solve both problems, especially if a Champion’s Cup-style finals series is introduced.

From February to mid-May, the NZ and Pacific sides could play a home-and-away round robin series before joining up with other countries’ clubs in late-May to play off in some winner-takes-all international club matches.

Add in a North Island v South Island clash or a Probables v Possibles All Blacks trial and the first half of the year is sorted, with the first round of Test matches involving the Southern Hemisphere sides kicking off in July.

The Rugby Championship kicks off shortly after the July Tests which leaves no window for full-strength New Zealand sides to battle it out in the latter half of the year but that creates an opportunity for the NZ provinces to effectively host their own trials for the next year’s Super replacement.

Instead of splitting the 14 provinces into two pseudo-divisions, the teams would be divided up geographically – potentially with sides playing the teams in their own region more than once in a season.

There’d still be ample opportunity for the likes of Auckland and Canterbury and Waikato and Otago to do battle in the latter stages of the competition but it’s the local rivalries that often get the blood pumping.

Super Rugby is fighting a losing battle with this year’s disruptions potentially signalling the death knell – but that creates an excellent opportunity for New Zealand Rugby to re-think things. Of course, the global rugby calendar needs changing but closer to home, it’s time for the local scene to get a significant refresh and the rumoured competition could be exactly what fans are looking for.

Watch: The Season Episode 7 Next