ABs back-ups struck by injuries Next
Back
Rugby World Cup

In three-and-a-bit weeks the World Cup will finally be kicking off in Japan.

The shadow of the showpiece tournament has been looming for a couple of years now.

Fans can get excited over the fact that we can expect to see one or two games at the tournament in Japan which we’ve rarely been treated to at World Cups – if at all.

There are, however, a number of matches which seem to occur at every World Cup. With 20 different countries in attendance, there should be plenty of variety in match-ups – but sometimes Lady Luck has different plans.

Inevitably a number of these games come during the knockout stages of the competition – but even the pool stages will throw out a few common matches in 2019.

Just because they’re frequently played at World Cups, it doesn’t mean they’re bad games – but if you’re tired of repetition then maybe give some of these matches a miss.

The match between the two Pool D top seeds will likely decide who has an easier run to the semi-finals of the 2019 World Cup. Australia and Wales will duke it out at Tokyo Stadium – the same pitch that will host the opening and final matches of this year’s competition.

There have been plenty of suggestions that Fiji could cause an upset against one of these teams, but the smart money will be on the Wallabies and the Red Dragons to topple the island nation. Australia start off their campaign against Fiji so they will already know what they need to do to get to the quarter-finals when they square off with Wales.

It’s a pity that these two teams were placed together in Pool D, because they also battled it out during the round-robin stages of 2015’s competition. It was a close-knit affair at the last World Cup, with Australia eventually triumphing 15-6. 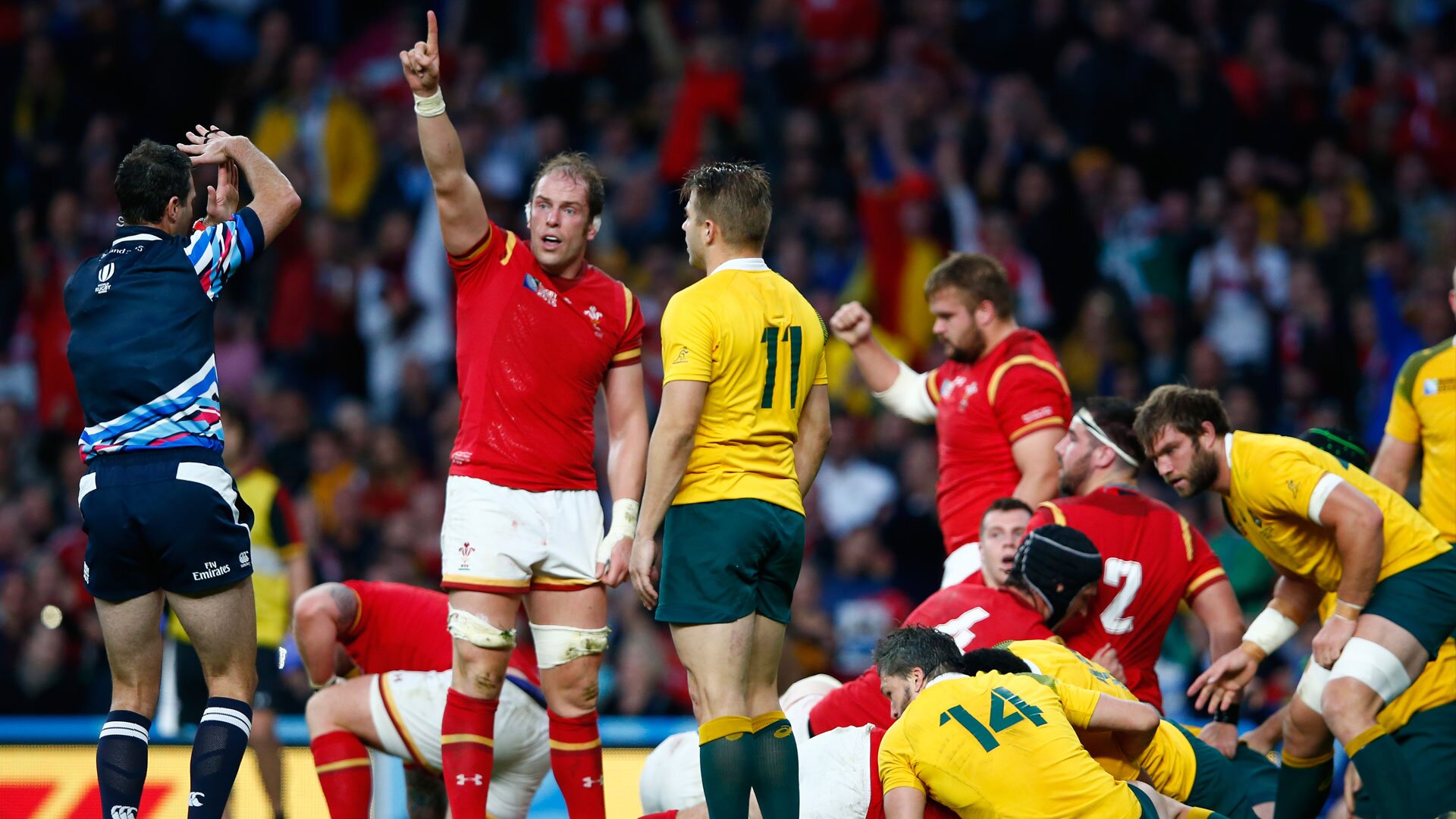 Alun Wyn Jones claims a try has been scored during the 2015 World Cup between Wales and Australia. (Photo by Shaun Botterill/Getty Images)

In fact, 2019 will mark the fourth occasion that Australia and Wales have started out in the same pool, with the sides also competing for finals places in 2007 and 1991.

Notably, Wales have not beaten Australia in a World Cup fixture since the first competition, way back in 1987. The Red Dragons managed a 1-point win over the Wallabies that year, but it’s been five straight victories for the Wallabies since then.

There’s arguably no side that the French savour beating more than the English, so they’ll be waiting with bated breath for their clash in Yokohama near the end of the pool stages of the 2019 competition.

That match could very well decide which of these two sides progresses to the quarter-finals, as they also share a pool with Argentina. Both teams will have played the Pumas by the time the October 12 match rolls around so there won’t be any unknowns about what needs to be done to secure a finals spot.

France, who have looked decidedly average for the last few years, tend to save their best rugby for the World Cup. Despite that, their win-rate against England in the flagship competition doesn’t differ much from how they normally perform against England in their annual Six Nation matches, which stands at approximately 60% since 1987.

France came out on top in 2011, the last time these nations met at a World Cup, winning 19-12 in the quarterfinals. They also managed a 10-point win in the 1995 3rd and 4th-place playoff – a match which neither side really wanted to be a part of. 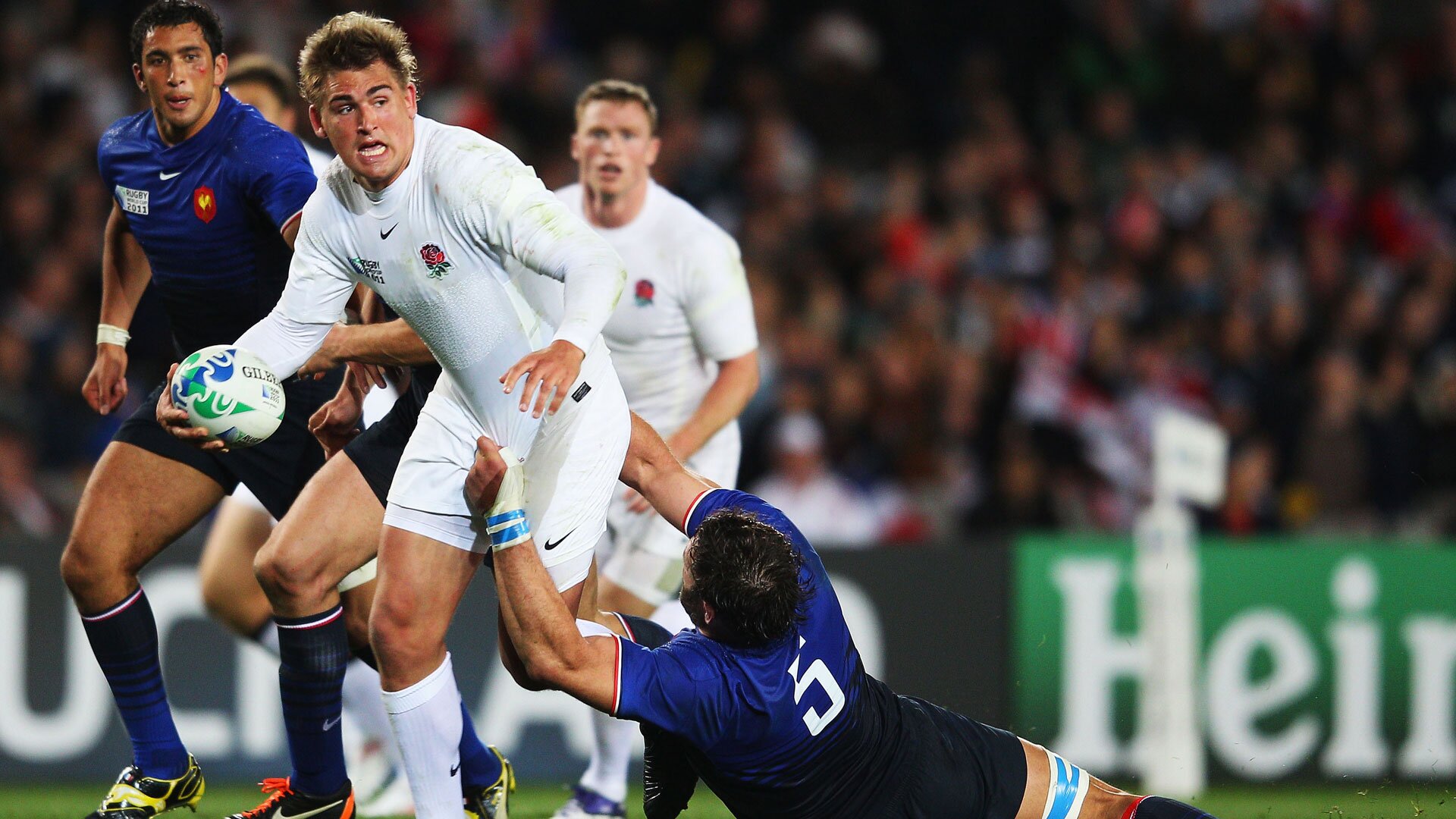 Toby Flood looks for support during England’s quarter-final match with France at the 2011 World Cup. (Photo by David Rogers/Getty Images)

The rest of the matches have fallen the way of the Red Roses. Knocking France out of their home World Cup in 2007 was arguably the biggest occasion, only a week after the French had toppled New Zealand. England also comfortably accounted for France on the way to winning their first and only World Cup title in 2003.

Curiously, these two rivals have never been paired together in the same pool.

Although it’s been a few cycles since the last World Cup match between New Zealand and Italy, it’s not exactly a match that’s easy to get excited about.

Sure, the Azzurri will give the All Blacks more of a challenge than their other pool-mates Namibia and Canada, but the deciding match in Pool B will have likely taken place three weeks earlier when New Zealand and the Springboks will have faced off in their first games of the cup.

It also doesn’t help that these two teams used to always be paired together at the World Cup – and it looks like that’s a tradition that’s about to be resumed. 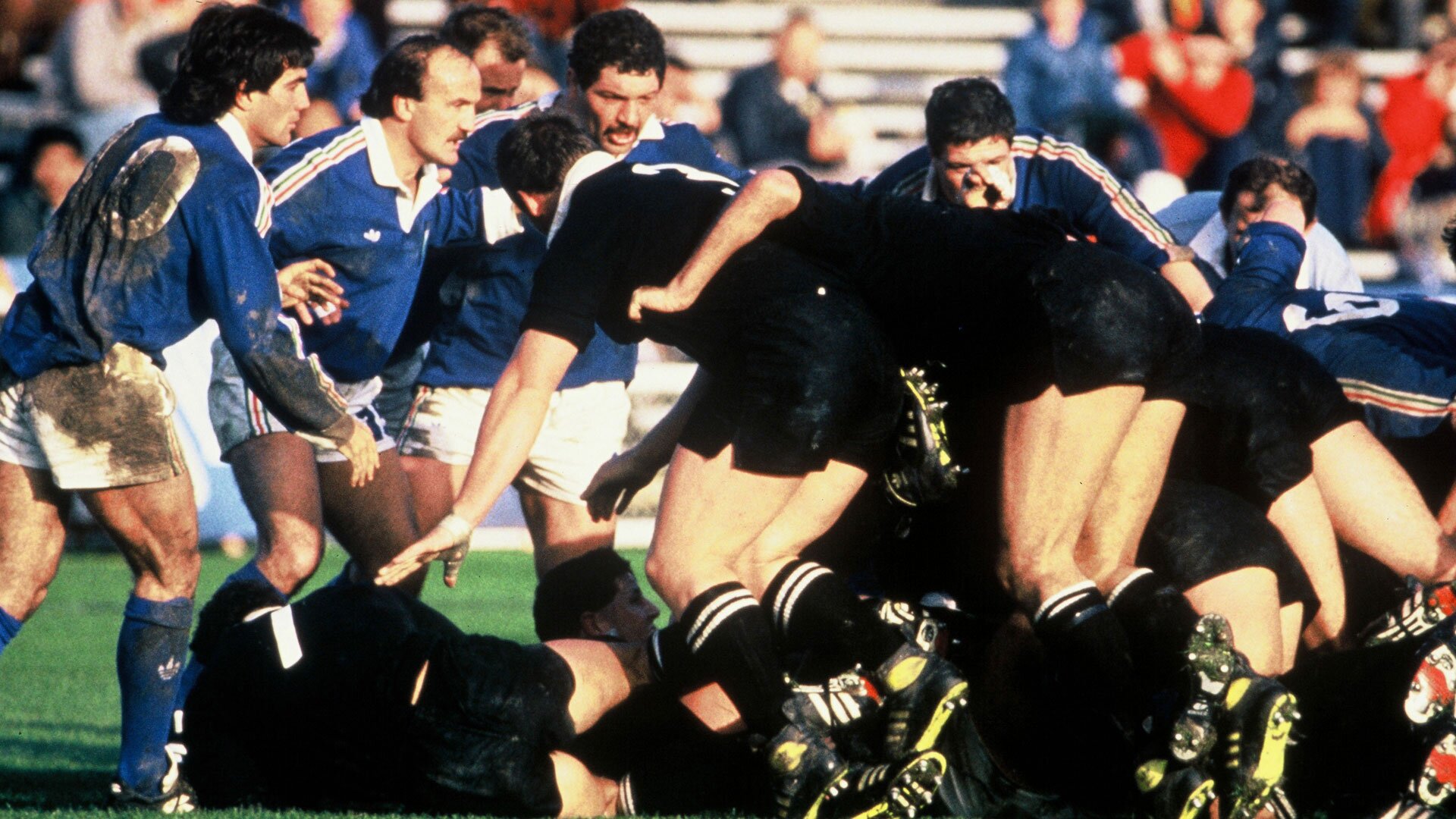 All Blacks forwards pile into the breakdown for New Zealand during their 1987 World Cup match with Italy. (Photo by Getty Images)

New Zealand could be facing Samoa, Fiji or even hosts Japan –sides that are fairly comparable in strength to the Italians but who the All Blacks have only encountered three times in total (Fiji once, Japan twice). Instead, they’re left facing the Azzurri – who have on their own faced off with New Zealand five times already.

Back in 1991, Italy actually managed to put up a good fight against New Zealand, losing by just 10 points. To this day, that remains the most closely contested match between the two sides. In their four other World Cup encounters, New Zealand have won by 62, 63, 64 and 98 points.

It’s hard to see too many people getting excited about this match-up when Japan v Scotland and Samoa v Ireland will also be taking place over the same weekend – as well the potentially pool-deciding game between England and Argentina.

Due to what can only be considered terribly bad luck, Scotland somehow always seem to run into the men in black during the quarter-final stages of the World Cup. That’s looking like a very distinct possibility in 2019 too.

If the All Blacks top their pool and Scotland finish as runners-up in theirs (or vice-versa), then the two nations will do battle in Tokyo for a spot in the semis.

Scotland have famously never managed to beat New Zealand in their 31 attempts – which is why they’ll once again be dreading facing off with the All Blacks come this year’s knockout stages. In 1991, the Scots came within 7-points of New Zealand, but the other games have pretty comprehensively fallen the way of the Kiwis. 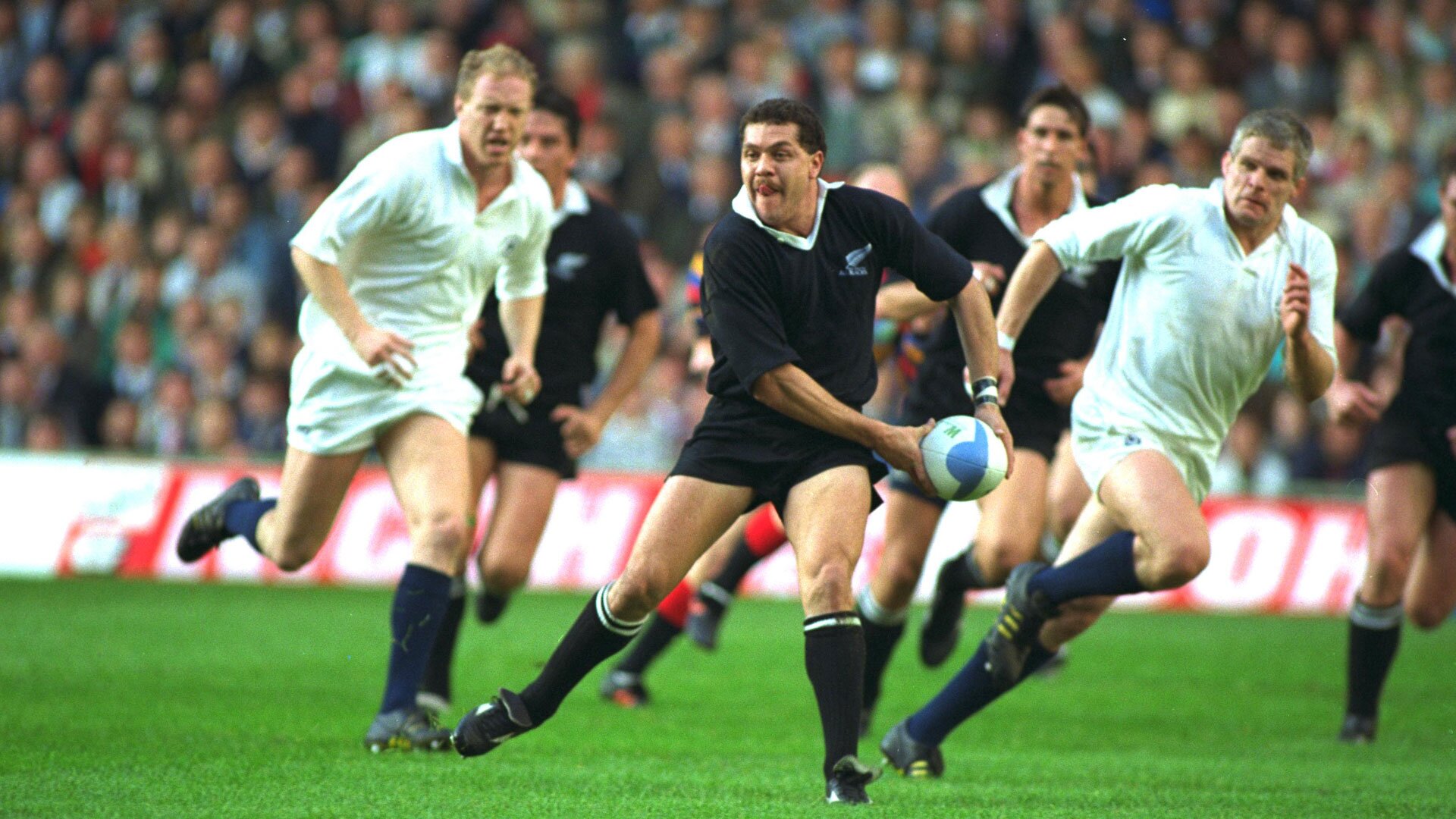 Of course, Scotland have been going through a reasonable resurgence over the last half-decade and came so very close to beating New Zealand in 2017 – but that won’t make a sudden-death match any more appealing.

All Blacks fans will be dreading this match-up because it happens so often. The Scottish fans also won’t be looking forward to it – primarily because they’ll expect it to be their side’s last game of the tournament.

There may only be a slim chance of these two sides squaring off in 2019’s tournament but it would be hard to leave out the most frequently played match in World Cup history.

The regularity of this match-up is due to how consistently New Zealand and France have made the knockout stages of the tournament. Only once – in 2011 – were the All Blacks and Les Bleus actually placed in the same pool. In that year they clashed twice. New Zealand thrashed the French in their pool match-up but weeks later France almost pulled off an historic victory in the grand final. 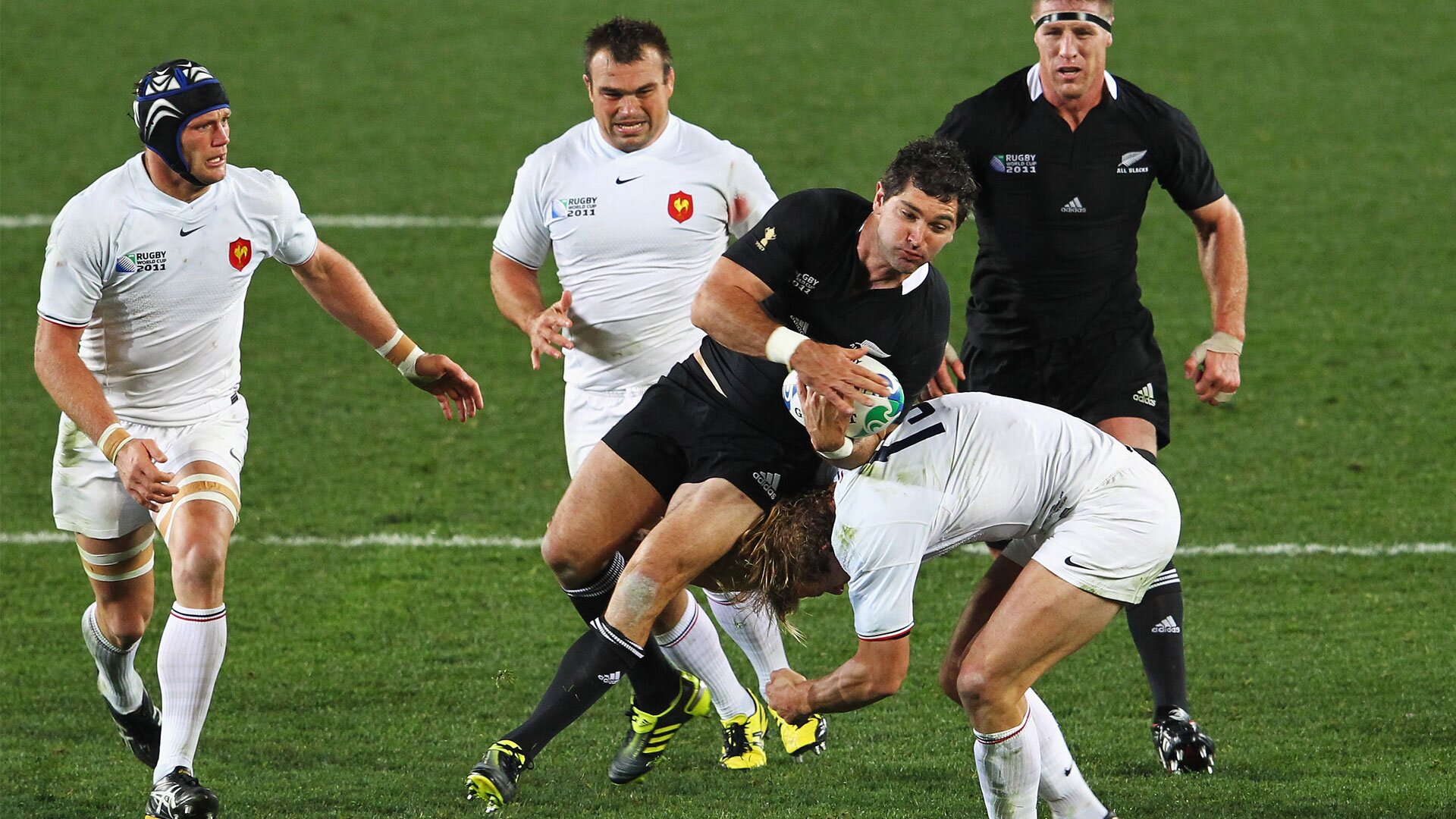 Stephen Donald was one of the heroes of the All Blacks’ 2011 World Cup grand final victory over France. (Photo by Sandra Mu/Getty Images)

That marked the second time that the rivals had battled it out in the final game of the competition. In the World Cup’s first iteration in 1987 the two nations also clashed in the ultimate game, with New Zealand succeeding 29-9.

Things haven’t always fallen the All Blacks’ way, however. In 1999, France knocked New Zealand out of the Europe-hosted competition then fell to Australia in the final. Les Bleus also famously handed the All Blacks their worst-ever World Cup finish when they bested them during the 2007 quarter-finals.

There’s plenty of history to this fixture and whilst the best rivalries never lose their lustre, it’s about time that we saw some other match-ups take centre stage. The last time a World Cup was held that didn’t feature a New Zealand/France clash was 24 years ago.

New Zealand and France won’t be able to meet until the semi-finals of this year’s competition at the very earliest so chances are we won’t see a match pan out in 2019.