Analysis: What the Springboks did to dismantle England's attack

Diamond wants Saracens in line Next
Back
Rugby World Cup

Analysis: What the Springboks did to dismantle England's attack

It was England that wanted to have the ‘most ferocious defence on the planet’ by November 2019, and whilst they came to Japan with their best side in 15 years, it is the Springboks who now have the most valid claim to that title.

Shaped by Rassie Erasmus, defence coach Jacques Nienaber and their coaching staff, the Springboks continued to improve from 2018 to become one of the fastest, fittest, physical defensive teams in the world.

England’s own game in the final drifted substantially from their confident three-kick zone strategy, highlighted by an attempt to exit by running out of their own in-goal less than five minutes into the game.

Farrell’s wayward pass hit the turf behind his own posts in what could have been a catastrophic start. After recovering to scramble out to the 22, George Ford drives a long kick down the throat of Handre Pollard.

This kick was the second sign that England wasn’t going to be themselves on the night.

In over two years, the only man who has handled England’s exit kicks has been Ben Youngs, expertly hoisting contestable box kicks to be re-gathered around their own 40 or into touch from inside the safety of the 22.

England rarely moves through the air more than two-thirds of the field at a time unless they have created the space to do so, yet they opened the game trying to do exactly that without compromising the backfield first.

Ford’s aimless long drive was counter-served by a contestable Pollard bomb and re-gathered, leading to more attacking play for the Springboks inside England’s 22. South Africa opened their account with a penalty moments later after Duane Vermeulen won a penalty over the ball after a loose pass from Billy Vunipola.

It took ten minutes for England to finally get a decent attacking platform after struggling to exit efficiently. 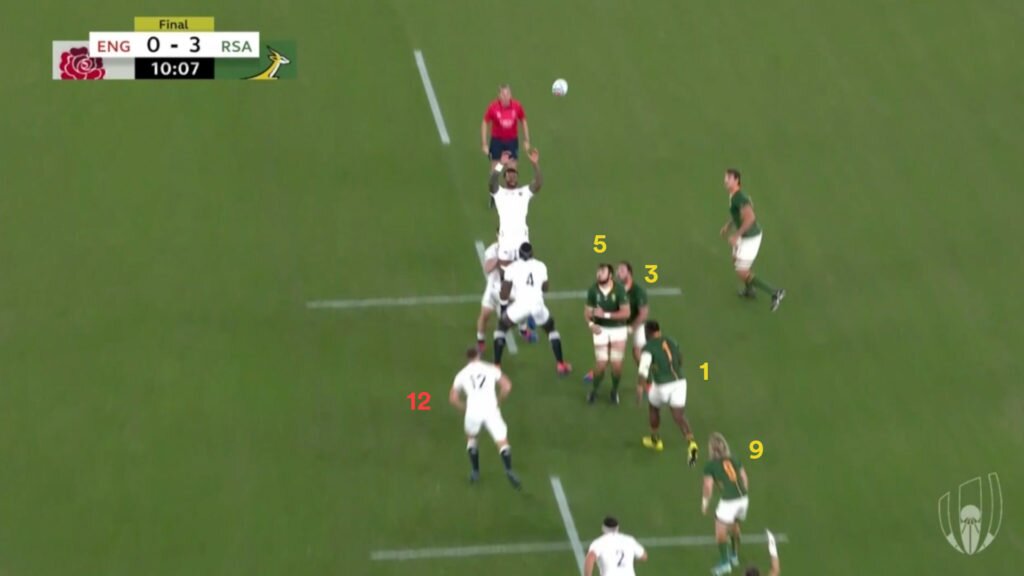 Under Eddie Jones, England has fired shots early, so when they got their first chance they used an intricate set-piece play.

Utilising a four-man lineout package to take loose forwards away from the edge, they tried to catch the Springboks too thin on the short side on a second phase switch.

With the Springbok tight five pushing out from the lineout towards the midfield, England uses the speed of Elliot Daly (15) and Anthony Watson (14) to create an overlap down the right-hand side. 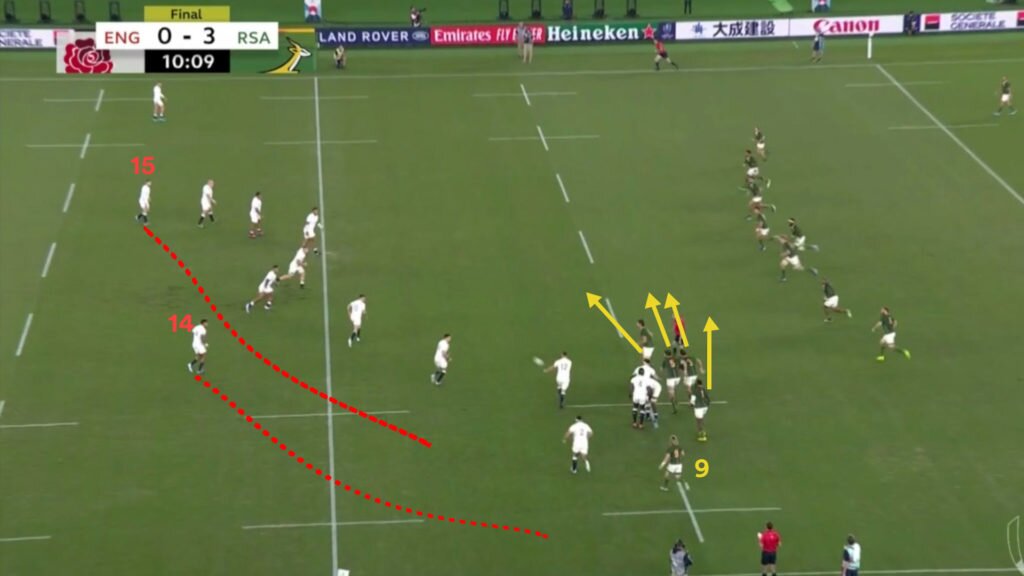 South Africa’s lineout defence under Rassie Erasmus has always used halfback Faf de Klerk (9) at hooker. This means De Klerk is left to defend the edge for multiple phases after a lineout. Many teams try to exploit this but few teams succeed.

Although it might seem South Africa are vulnerable, Faf De Klerk can handle any winger one-on-one, shut down overlaps even when outnumbered, and generally over-deliver with his outstanding defensive coverage.

He knows when to shoot up and take space, when to commit to the tackle and when to hold off. He rarely comes off second best and consistently wins from disadvantaged positions like this one. 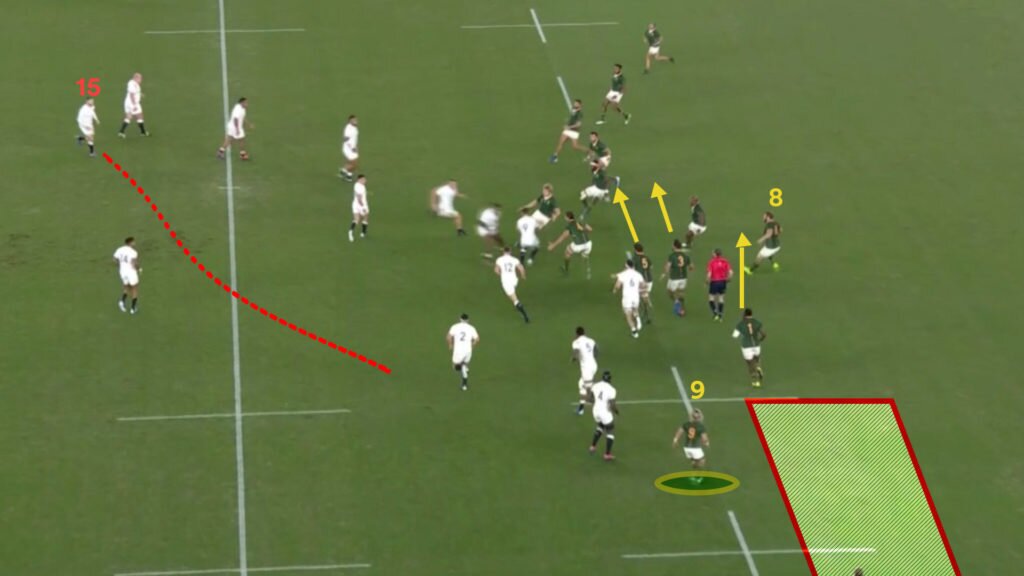 South Africa’s jumping unit from the lineout are required to make the tackle on Manu Tuilagi, leaving De Klerk as the sole defender on the left edge with a lot of space to defend. 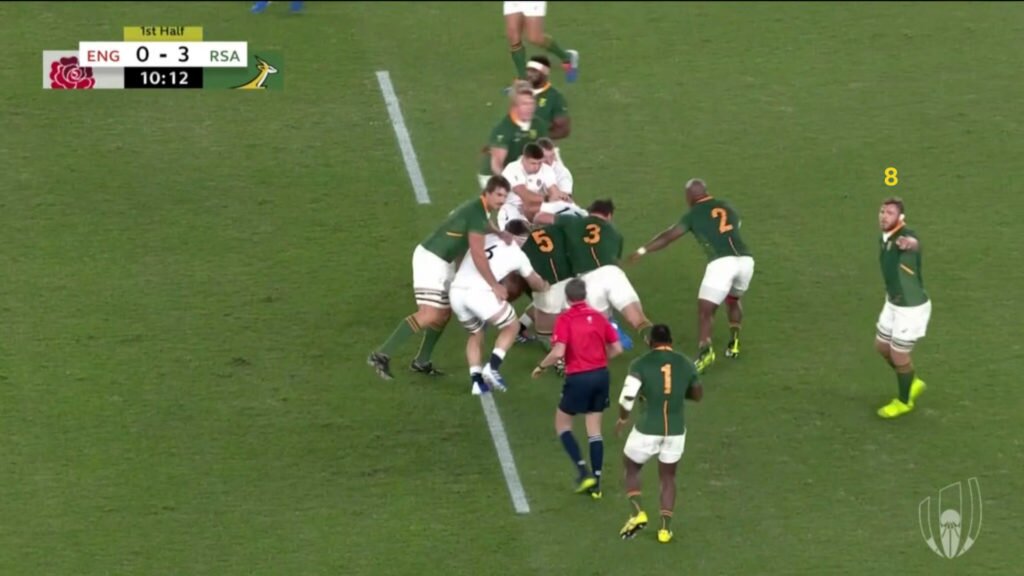 Duane Vermeulen (8) recognises the problem early and is one of the first players to organise troops to help De Klerk on the left side. 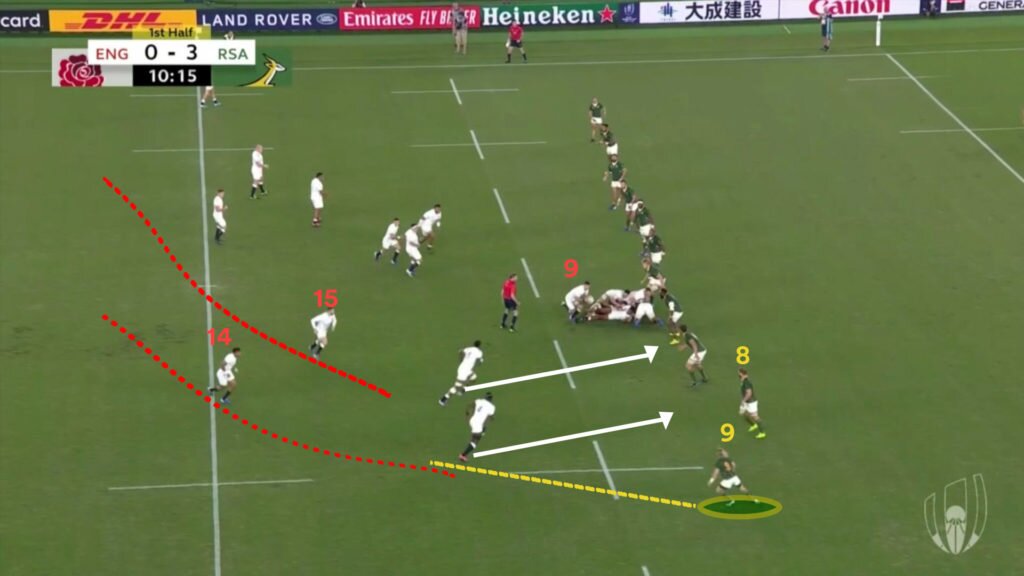 South Africa isn’t in the worst shape but not the best either.

England has a numbers advantage with the outside backs linking in at pace behind two forward runners and halfback Youngs taking off to the right.

De Klerk makes an early decision to shoot up and obstruct the passing lane. 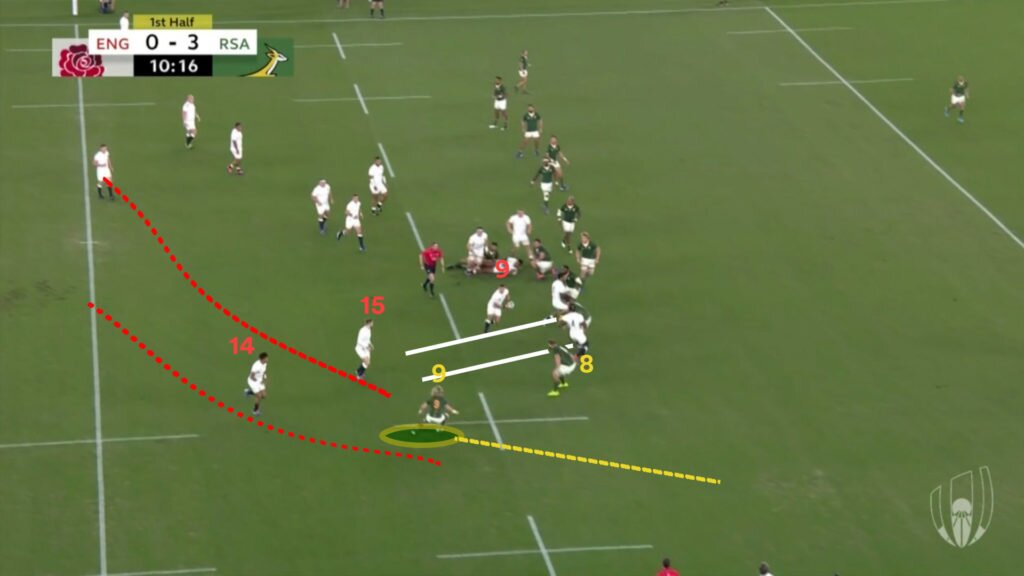 Youngs doesn’t play the two flat options and is forced to throw a pass before being called for an obstruction, but De Klerk has Daly covered and the lane to Watson blocked. 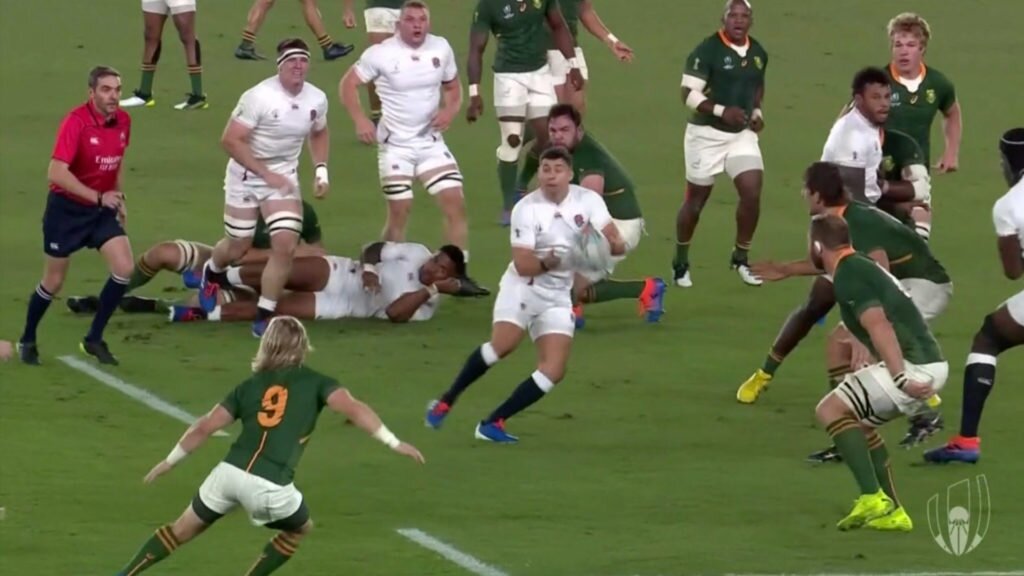 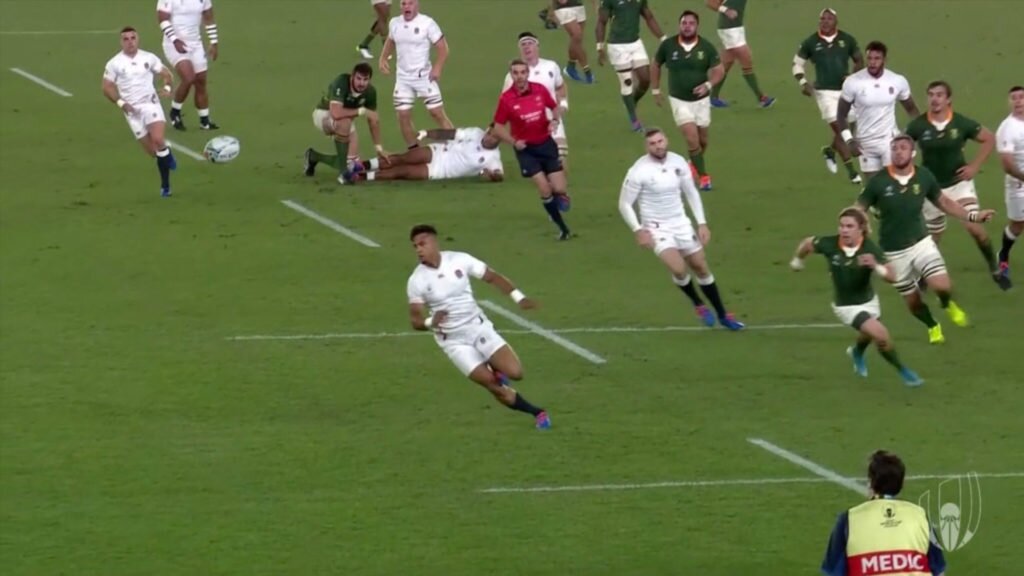 Youngs forces a difficult lofted pass and the ball sails over the head of Watson into touch for a turnover of possession.

De Klerk doesn’t touch the ball or any player, but his influence on the play is undeniable. This is all part of the package of what he brings to this Springboks side. He can kill plays before they happen, cause them to unravel with pressure or save the Springboks from compromised positions.

After having their second lineout pinched by Etzebeth, England launch another attack with their third of the game.

They run Jonny May for a carry underneath Jamie George on the first phase and work two more pods around the corner, carrying the same way before Youngs switches back to the left. 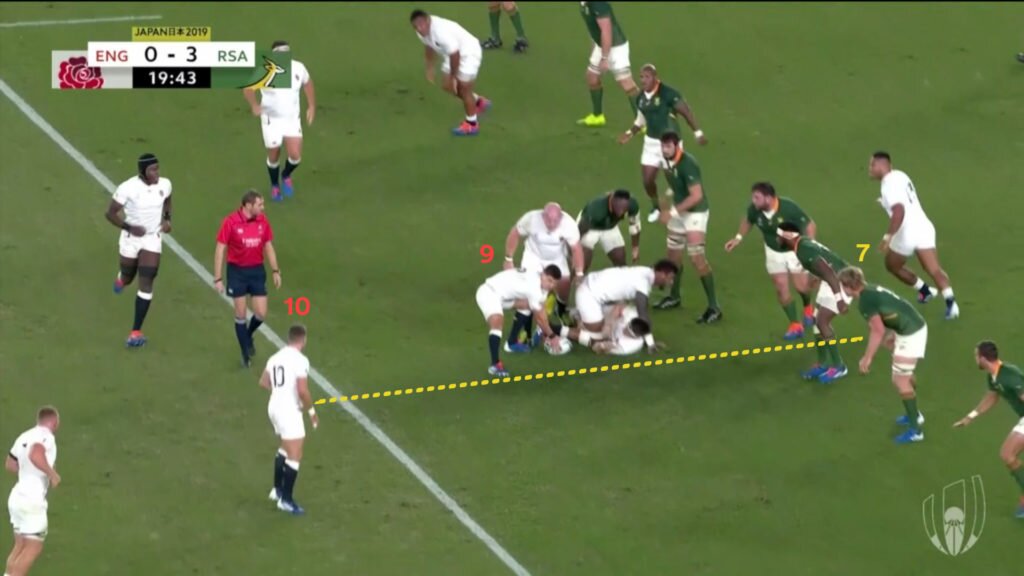 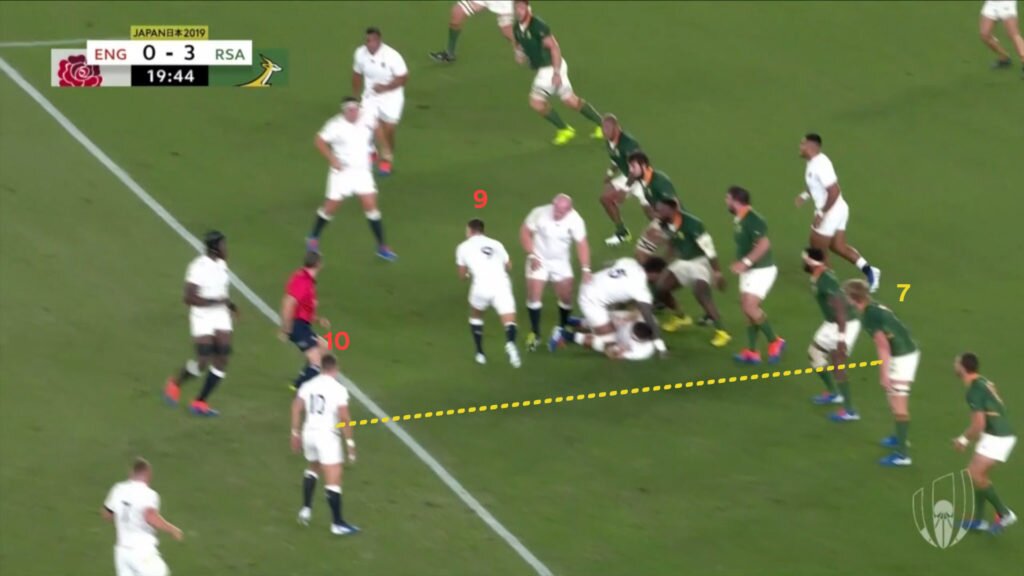 One key aspect to keep in mind is Pieter-Steph du Toit’s alignment with George Ford, which was another part of the Springboks’ plan to pressure England.

In this case, Youngs plays back left the other way to Owen Farrell looking to expose South Africa back where the lineout took place. 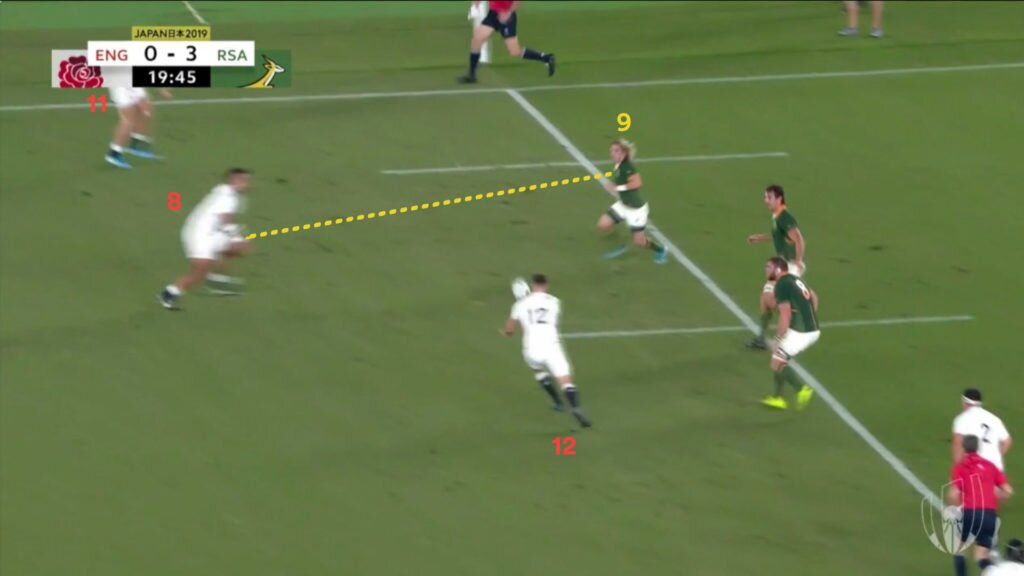 Again Faf de Klerk is the last defender and makes another crucial spot tackle on a much larger Number 8, Billy Vunipola, preventing the free man Jonny May (11) from getting the ball. 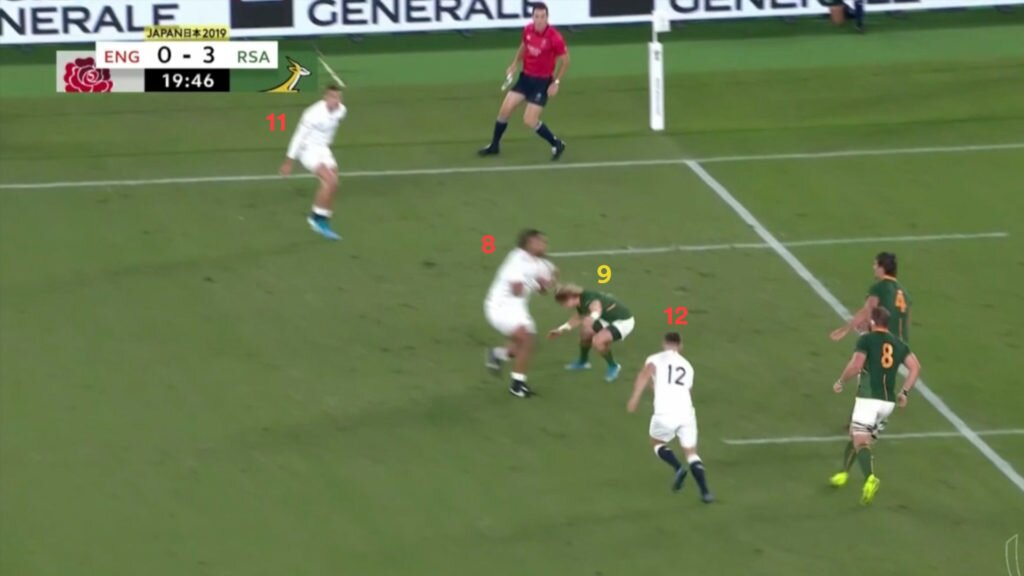 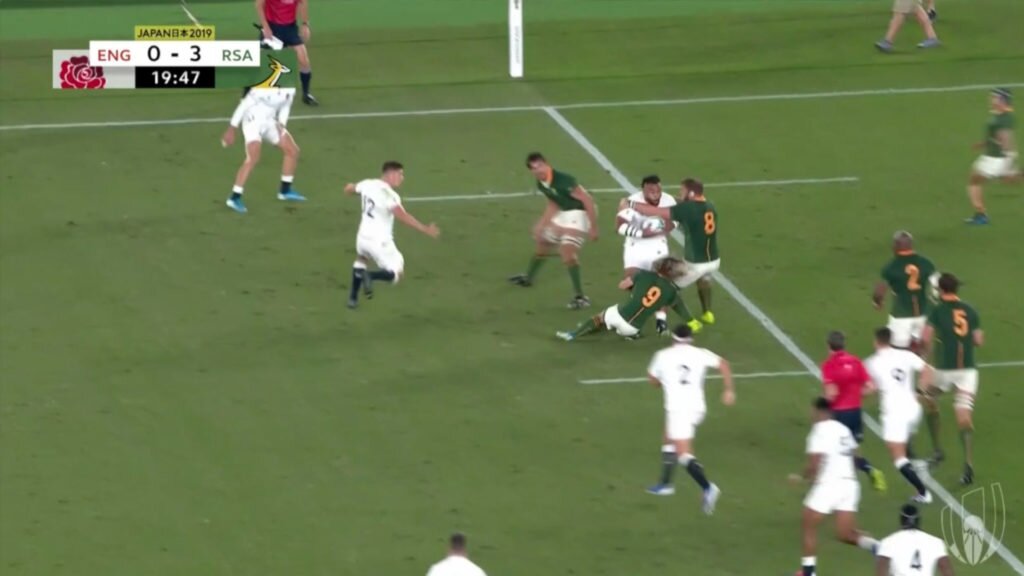 Vermeulen assists up top in wrapping up the arms so no offload can be made.

Faf de Klerk proved to be an extremely valuable edge defender, offering backside insurance that no other halfback can. His range is underestimated, as he can cover a lot of space very quickly which England found out on these two occasions.

Even when he was left out there on an island, England wasn’t looking to attack back that way a third time when the space was seemingly ‘undefendable’, much to the frustration of captain Owen Farrell (12). 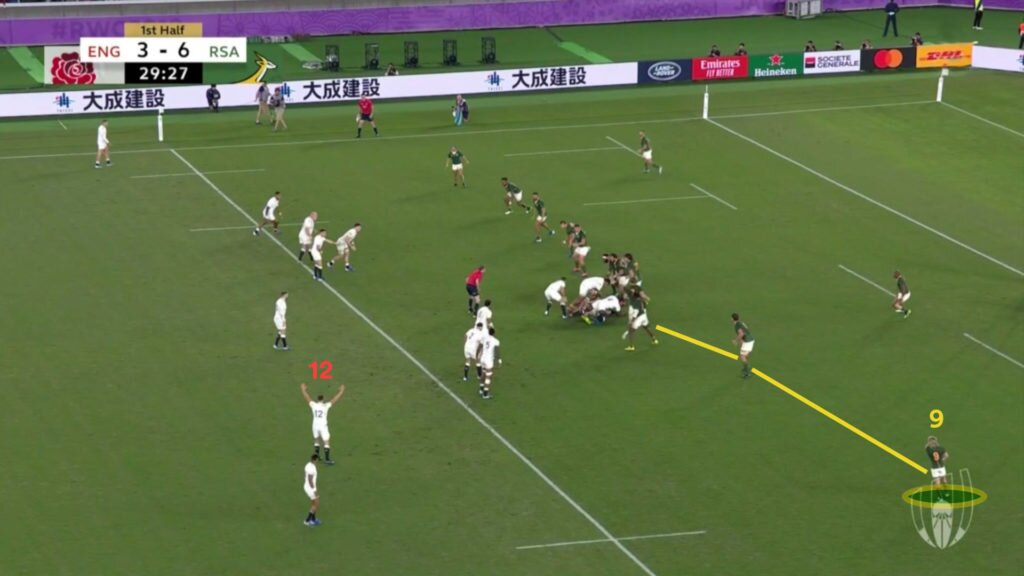 Both George Ford and Owen Farrell, to some degree, failed to play direct at times during the match which also contributed to missing out on opportunities where South Africa’s defence was disadvantaged.

This is part of the same passage of play a few phases later after the Vunipola tackle where England have quick ball against an extremely fractured defensive line.

Faf de Klerk (9) is folding from the opposite side of the ruck while Cheslin Kolbe (14) makes a calculated gamble to shoot up to try and close down the play. 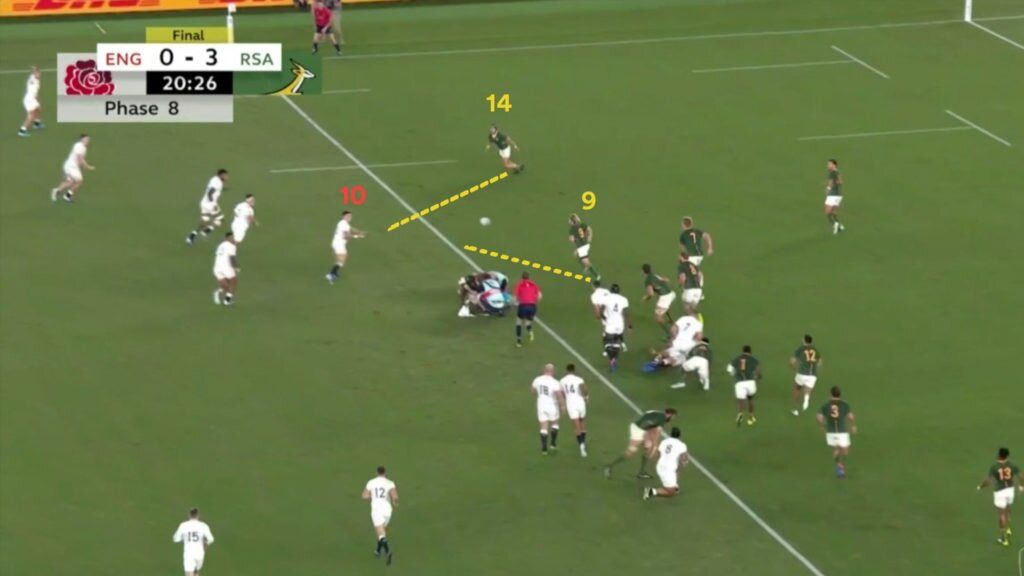 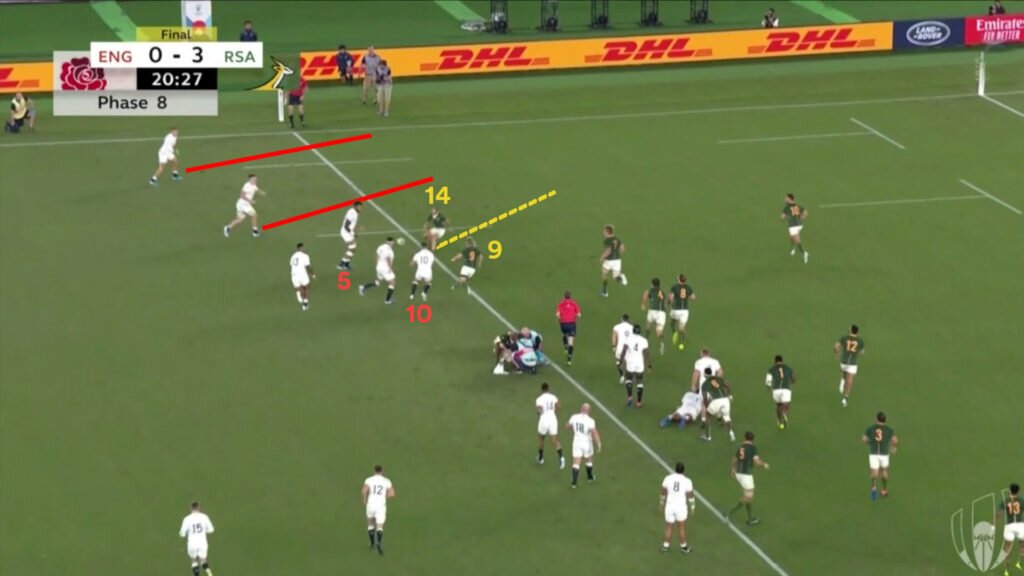 Despite having a 5-on-2 advantage, England botch this overlap as Courtney Lawes (5) is wrapped up by Kolbe.

Ford fails to take it to the line and commit De Klerk, bailing early with the oncoming presence of the halfback.

His early pass allows De Klerk to push onward, while his target, Lawes, is flat-footed. Ford doesn’t lead him onto the ball and he is, unfortunately, the one guy Kolbe picked out to tackle. 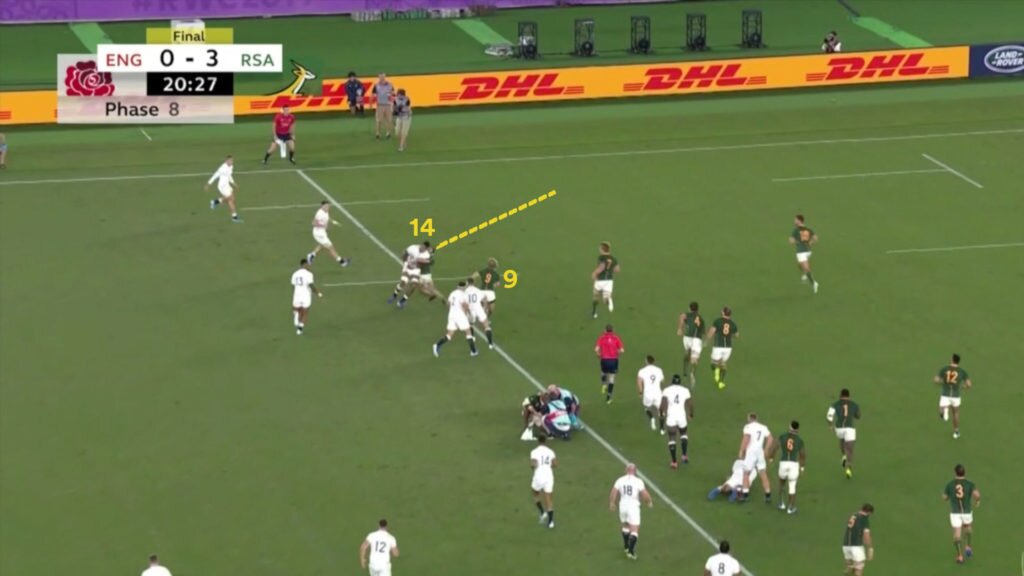 Many other options were available to Ford that may have resulted in England getting away down the edge or piercing the gap between De Klerk and Kolbe by playing direct.

This is just one isolated decision but upon review was something that happened frequently to England’s playmakers who made rushed decisions and looked apprehensive in the face of the Springboks’ line speed.

In particular, George Ford was haunted by Pieter-Steph Du Toit who had a directive to follow him around all night, and it seemed to play on his mind a bit and impact his confidence. 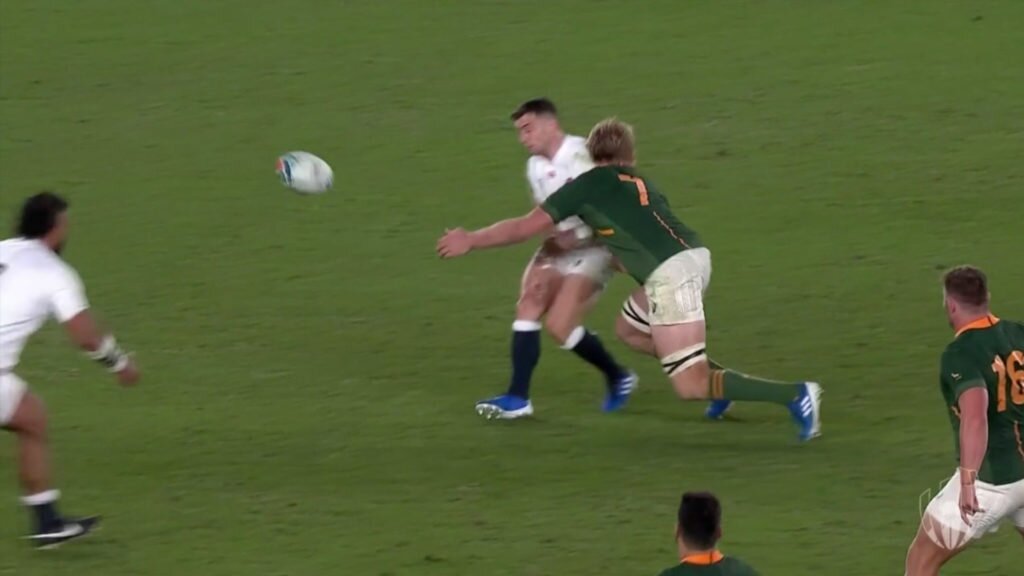 On England’s first lineout attack of the first half, Du Toit marked up on him on five straight phases, delivering two hits, constantly bearing down on him. Every time Ford looked up he had Du Toit coming.

With the ball-in-hand, Ford failed to stay square, stayed deep and looked to get rid of it early which threw the timing out of England’s attack. He often shied away after the pass, twisting himself to brace for the contact which left him at times more focused on self-preservation than hitting the right target. His outside runners could never hit the ball at pace and find their timing.

After getting a ball out the back from Itoje, Ford stands on the spot to buy time against a rushing Du Toit and heaves a wild pass, missing a hard-running Vunipola heading into a gap and over the head of everyone else to find Elliot Daly on the bounce. 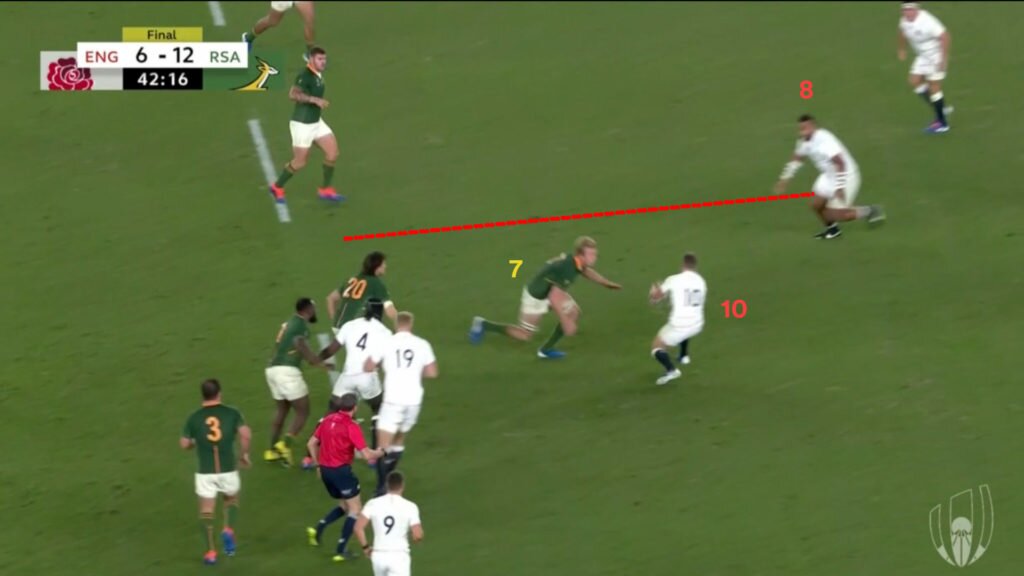 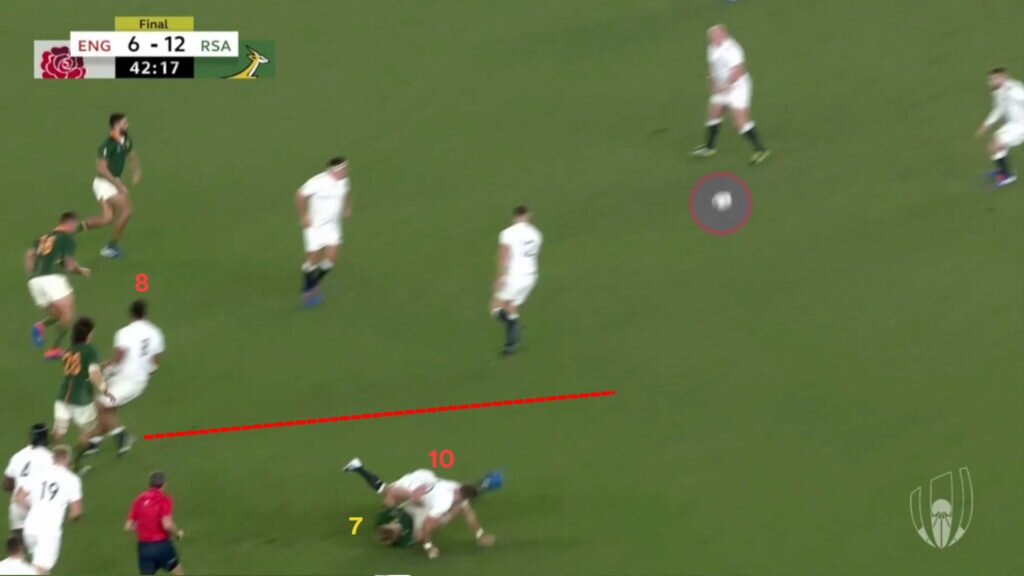 It has to be said that Ford looked panicked and shaken as the Springboks repeatedly sent heavy traffic his way and delivered hits off the ball. He kicked poorly tactically and overcooked one on the full, and after 49-minutes he was pulled from the field.

While the score was only 15-6 in South Africa’s favour at the time of the substitution, England had failed to score tries on multiple possessions that could have changed the dynamic of the game, despite the failures at the scrum. On one such occasion, 26 phases of pounding the Springboks line ended up settling for three after going backward 30-metres.

While Ford can’t be blamed for the entire England performance, it certainly played a part in the unraveling of England.

It was part of the Springboks plan to unsettle him, he was a key part of England’s attack and it took Owen Farrell away from the game for long periods as he played a secondary driver role as the game was put in Ford’s hands.

It was part of the risk England took instead of changing the 10-12-13 line up to Farrell-Tuilagi-Slade to deal with the increased physicality South Africa would bring.

There were signs earlier in the year in Wellington that this Springbok defence would be a handful as they kept the All Blacks to one try and 16 points with aggressive high-line tactics and shooting off the edge.

Although the match was drawn, it was the third-lowest score by a New Zealand side under Steve Hansen. It was far more impressive defensive showing than the 36-34 win the year before and showed the arc that the team was on heading into the Rugby World Cup, which culminated in keeping England tryless in the World Cup final.

If you are going to win games by kicking three’s, then you better have a special defence. And the Springboks certainly did, one that unsettled England’s best and made them look far from the players they usually are.