By Jamie Lyall
Rugby reprises the feel-good factor
By
Jamie Lyall
1 year ago
EnglandIrelandScotland
9:00am, 27 September 2021 Go to comments

A pulsating weekend of action featured the dramatic launch of the rebranded United Rugby Championship, more Gallagher Premiership upsets, welcome returns from injury and a glut of talent plying their wares to packed stadiums. Rugby, it seems, is healing.

Here, The XV chews over the Michelin-star fare served up across the game.

The established order takes a pounding

Pre-season predictions. They’re a fool’s errand, aren’t they? Guaranteed you make even the most learned rugby watcher look like they’re talking out of their posterior. Pretty much every expert saw Exeter and Bristol planted squarely in the top four. And before the smart alecs remind us we’re only two games into the season, two of the Premiership’s true heavyweights will surely have refound their balance after chastening starts to the season. That’s right, Bristol and Exeter Chiefs, those West Country behemoths, have shown their fragility by not recording a single win in their first four fixtures.

For Bristol, the news that Pat Lam has signed a seven-year contract extension has been met with a rabbit punch to the ribs by those gnarly streetfighters Saracens and a swinging right hook from Wasps, who handed out a 42-8 shellacking to Lam’s men. In truth, the game was more competitive than the scoreline suggests but, in the absence of Semi Radradra, Kyle Sinckler and the grand master John Afoa, the Bears seems to have lost some of their lustre. Not having the zeal of Ben Earl and Max Malins to conjure up some magic is not helping their early-season blues, meaning a first real test in their upward trajectory over the past 18 months.

As for Exeter Chiefs, they have gone from double-winning darlings of England’s rugby garden to social-media pariahs in some quarters; accused of cultural appropriation for their branding and out of touch with their perceived attitude towards Covid vaccinations. Rob Baxter’s men would need to have the hides of rhinos not to notice the negativity, so it’s a moot point whether it’s affecting their on-field performances. Either way, their narrow home loss to a Northampton Saints side who are rediscovering their mojo was another metaphorical bloody nose to check their progress after last week’s 34-19 loss to Leicester Tigers.

The final eye-catching result came in Brentford. Twenty-four hours after the Premier League team put up a spirited 3-3 draw with Premier League leaders Liverpool, London Irish were entertaining the crowds as they clawed their way back from 31-14 down to a 31-31 draw with Sale Sharks, another top-four certainty if you read rugby’s cognoscenti. If Paddy Jackson’s monstrous 57-metre penalty hadn’t hit the upright, it would have marked an epic winning comeback.

It’s early days, but it is shaping up to be a rollicking season, where reputations are there to be shattered.

Wayne Pivac was asked on BBC Scrum V whether he was having conversations with his older players, with the World Cup now less than two years away. His answer was heartening for any player hitting their thirties. He said that a birth certificate was only a piece of paper and it was how said player was performing. After Eddie Jones, with his bounteous player depth, saw a mini-cull of seasoned players, you suspect Pivac knows he has to be more creative in keeping his more mature players ticking over for a French goodbye. Two players who now fall into that category are Gareth Anscombe and Scott Williams.

The former has endured a tortuous 777-day enforced injury break between games. Whatever happens from now on, the 28-cap Wales fly-half will take enormous heart from being able to take the field. His class was evident as he guided the Ospreys backline around Rodney Parade on their way to an entertaining 27-23 win over the hosts. He became increasingly assured kicking from hand and off the tee, but it was in the 61st minute that Anscombe showed evidence he can continue to be a running threat. Receiving the ball from Tiaan Thomas-Wheeler, he instinctively first stepped right off his left foot, before quickly changing direction to push off his right foot to feed Luke Morgan to pull away and score. It was vintage Anscombe and his recovery will be watched intently at the very highest level. Wales are a better team with the New Zealand-born pivot in it.

Up in Edinburgh, there was the heartening sight of Jonathan Davies and Scott Williams combining. After just 27 appearances in three injury-plagued years, Williams joined forces with Davies to reprise their double act. With 149 Test caps between them, they put in assured performances. A perfect example came as they dovetailed beautifully for Johnny McNicholl’s score, with Williams executing the perfect pull-back pass for Davies to find space, fend and feed McNicholl to score.

If the Newcastle-Emlyn centre’s body holds up, there is no reason he can reprise the midfield partnership on the national stage this autumn, with George North still out, and Johnny Williams battling his way back to fitness.

South Africans will improve and that’s not Bulls***

It is a competition best known for its rebrands. We’ve had the Celtic League, the Magners League, the Pro12, Pro14, Rainbow Cup, every name imaginable bar I Can’t Believe It Is Not The Celtic League. Now here we are again, welcoming the United Rugby Championship into the rugby family.

It proved a tough baptism for the supposedly all-conquering South African ‘Big Four’. Three of them lost, the Bulls by a huge margin; the Sharks after coughing up six tries to a rampant Munster. Only the Sigma Lions tasted victory but before we pop the champagne corks, look who it was achieved against: Zebre.

Since replacing Aironi as the second Italian representative side in 2012, Zebre have played 184 games in the Pro12/14/United Rugby Championship, winning just 33 times. So, to put it another way, if anyone thought the four new entrants into the most maligned league in world rugby were going to cruise to glory, then the weekend’s action altered that perception.

Bear in mind the ‘Big Four’ are battle-hardened, having tasted Currie Cup action during the summer while their Irish/Italian/Scottish/Welsh cousins were undergoing a pre-season. That should have given the South African sides an edge. Instead the Bulls lost by 28 points, the Sharks by 25, while the Stormers were beaten by Benetton.

Of course it’s too early to draw conclusions. Opening weekends are often deceptive – especially when they double up as the first weekend when the doors were opened and fans were allowed back into grounds. Tellingly, six of the eight URC games ended in home victories. You know the Bulls, Sharks et al will be different beasts on South African soil. We also now know they won’t get away with taking any team lightly.

Across three such blockbusting days of rugby, it would be easy to overlook a player hitting 50 caps, easier still when said player reaches the milestone in a World Cup qualifier.

But Emma Wassell, the Scotland lock in question, deserves all the fanfare of the London Symphony Orchestra. For not only has she notched an industrious half-century of Tests, she has done so without missing a single international.

Indeed, Wassell has played in every Scotland match since her debut in 2014, a quite astonishing feat of durability, skill and dedication. She has started all but two, culminating in Saturday’s palpitation-inducing victory over Ireland that preserves Scottish hopes of making the New Zealand showpiece next year.

Firstly, Wassell is a fine player. A tidy footballer with a mammoth work-rate, her ever-present stint in the engine room has spanned four head coaches. Secondly, regardless of talent, it is exceedingly difficult to string together so many matches without succumbing to injury, loss of form or fatigue.

And setting aside the brutality of top-level rugby, female players face a hideous array of hurdles and constraints that never trouble their elite male counterparts. Nobody in the Scotland men’s side will be forced to juggle work and international sport, play for free to the point where representing their country may actually cost them money, pay for their own boots, make huge sacrifices in career progression, or find themselves constantly asking an employer for another week off here and early finish there.

For the vast majority of her career, Wassell combined amateur club rugby in Scotland with studying for chartered accountancy qualifications and working with an Aberdeen-based firm. Only this year did she join national captain Rachel Malcolm at Loughborough Lightning in England’s Premier 15s.

Against this stark backdrop, 50 Tests on the spin borders on the superhuman. Rugby asks a lot of its female stars – Wassell and those like her keep coming up with the answers.

In the professional era, Edinburgh have bounced around their famous rugby city like a stray dog looking for scraps, always returning to the cavernous embrace of Murrayfield.

Meadowbank, Myreside and Meggetland were, at various points, used as bases. None provided a long-term solution, or a more satisfactory experience than a few thousand supporters rattling around the great 67,000-seater bowl.

Scottish Rugby made admirable attempts to turn Murrayfield into Edinburgh’s home, but around the club there was often the feeling they were unwanted lodgers renting a room in the Scotland team’s mansion.

At last, they have a place to call their own. The Dam Health Stadium – a sponsorship agreement netting Edinburgh a seven-figure sum over five years – may be built in the shadow of the Big Hoose, but it is a ground Edinburgh can make their castle.

First to storm the ramparts were the Scarlets on Saturday evening, and the modest little ground became a cacophony of colour and noise as the Welshmen were vanquished. A riveting encounter, champagne rugby and a bonus-point home win were the perfect housewarming.

Edinburgh’s style has flipped 180 degrees in the three short months since rookie head coach Mike Blair replaced Richard Cockerill. The former Scotland captain has his players expressing themselves, playing with more freedom and flair than anything seen under his predecessor.

Cockerill did get results with his forwards-dominated, and at times restrictive, blueprint. Blair would be wise to retain the rugged snarl upon which play-off places and European quarter-finals were reached.

But you sense a weight has been lifted from the squad after the torridness and malcontent that engulfed the end of Cockerill’s reign. New coach, new style, new home and a new start for Edinburgh.

‘Number nine, Craig Casey’. Cheers for the local lad who was educated just 300 yards from Thomond Park. ‘Number 11, making his return to Thomond Park, Simonnnnnnnnnnnnnnn Zeee-boooo!!!’ You’d have thought we were about to see a heavyweight title fight. 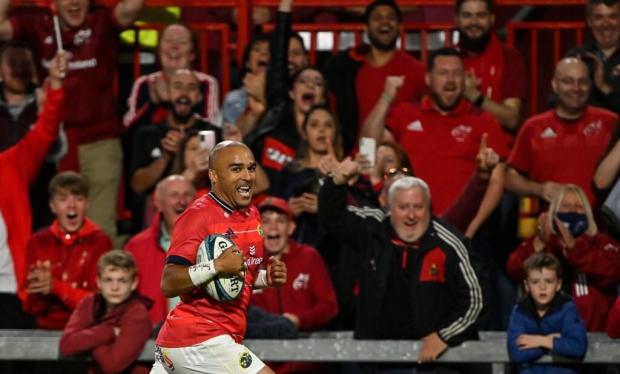 Instead it was a sparring session. A good one, though. Munster impressed. Zebo certainly did, so too Casey, the pocket-sized scrum-half. Between the pair, they scored three tries. Gavin Coombes also got a couple, the man on the PA tapping into the mood of the evening when he announced that RG Snyman was finally going to make his Thomond Park debut, a year after signing for Munster, a year after rupturing his cruciate.

The locals lapped it up, the debut, the Prodigal Son coming home, the tries. Most of all, though, they celebrated feeling normal again, being at rugby again, giving out about this refereeing decision, or that misplaced pass. Everyone felt liberated, Munster tapping into the theme of the occasion by passing the ball inside their own half for a change rather than just booting it. It’s incredible what a difference a couple of players make to a team. Zebo, Snyman, the fans, it energised the entire side, men like Niall Scannell and Andrew Conway producing their best performance in at least a year.

Suddenly it’s looking bright again in Limerick. Ten years on since their last trophy, this has the potential to be Munster’s year.