RUGBYPASS+ How England's exploits shut down the Wales lineout

By Nick Bishop
How England's exploits shut down the Wales lineout
By
Nick Bishop
11 months ago
Six NationsEnglandWales
11:22am, 01 March 2022 5 Comments

Ex-Scottish Sevens star Mike Adamson is rapidly making a name for himself as one of the most controversial officials in the game. It is probably not the kind of reputation he would like to carve out as he climbs the international ladder.

Wind the clock back to November, and Adamson gave Wales the benefit of some very considerable doubt in a deliberate knock-on scenario. It resulted in a try for the men in red and decided their autumn encounter against the Wallabies:

The ball hits centre Nick Tompkins’ hand and drops straight downwards to the grass. Probably nine times out of every ten, maybe 99 times out of every 100, it would be given as a knock-on – especially given that all the players on both sides (including Tompkins) momentarily stop playing. Adamson played on and allowed the score.

The Scottish official found himself at the epicentre of another controversy after the European Champions Cup game between English Premiership champions Harlequins and Top 14 club Castres in January. The Twitter feed after a couple of game-changing decisions went against the French club at the death was especially vitriolic:

Not a lot of love for Mike Adamson on here tonight

But perhaps the most damaging critique arrived via the pages of The Irish Times from the pen of Owen Doyle, himself a respected ex-international referee:

“On Friday, Harlequins and Castres played out a great match, five tries each, but the result was truly marred by the end game performance of the referee, Scotland’s Mike Adamson. In the final 20 minutes the French team got absolutely no change from Adamson, who overlooked the age-old philosophy – just whistle the clearly obvious stuff, which you must – otherwise play on, let the players decide the outcome. It’s impossible to say other than the referee altered the result, 36-33 for the home team.”

Adamson’s refereeing performance also raised issues and arguably altered the result of the game at Twickenham. There were many areas of serious concern – the length of time it took to set scrums and the number of resets, and the consistency of judgment at the tackle and post-tackle among them.

The most critical aspect was also one of the simplest: the ability of the referee to preserve the legal space demanded at the formation of a lineout. World Rugby’s rules on the matter are crystal-clear:

18.10. Each team forms a single line parallel to and half a metre from the mark of touch on their side of the lineout between the five-metre and 15-metre lines. The gap between the lines must be maintained until the ball is thrown in. Sanction: Free-kick.

18.21. Players must not make any contact with an opponent before the ball is thrown in. Sanction: Penalty.

The referee’s first mandate is, therefore, to establish a clear and obvious one-metre gap between the two lines, and ensure there is no contact between them before the ball is thrown in.

In the match at Twickenham, this rule was rarely observed – particularly on the Welsh throw, and particularly at lineouts in the two red zones, where the outcomes were much more likely to be significant.

Here is a snapshot from the first Wales lineout of the game, only five metres from the England goal-line: There is only about one-third of the distance required between the two lines at the moment just before the throw is made. It gave Maro Itoje and his cohorts a solid idea of what Mike Adamson would allow subsequently, and just how much licence England could take.

At the next close-range lineout, they nibbled off a little more of the lettuce – enough to win a turnover:

English feet start on the 5-metre line, but by the time the throw is ready to be delivered all of the forwards have shuffled forward to close the gap: The window of opportunity for the thrower, hooker Ryan Elias, has narrowed so much that there is now no advantage in having the feed at all.

A third lineout later in the first half illustrated the difficulties for the thrower and receiver from a revealing overhead eagle’s eye angle:

England are not competing directly with the throw on this occasion, but the following lineout drive is going nowhere because the home forwards are already across the midpoint of the line, and have all of the momentum in their favour.

The tipping point arrived in the 43rd minute of the match:

From this angle, it looks like miscommunication on the Welsh side between thrower (Elias) and caller (lock Adam Beard), which enables England number 8 Alex Dombrandt to pick up the shrapnel at the tail and force his way over for the try.

Once again, the view from the eyrie reveals far more about what was really going on:

At the instant of release, space is quite literally for the birds. There is no gap whatsoever between Adam Beard and Maro Itoje on the jump, or between Wyn Jones and Charlie Ewels, the two front lifters supporting them: 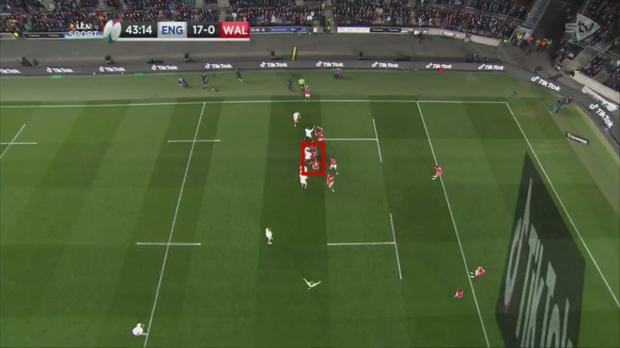 Adam Beard has no room to even get off the ground, and it was very surprising that neither the referee himself nor his TMO found anything worth reviewing in the footage; or if they did, that they considered it irrelevant.

Wales lost another key attacking position to a spoil based on the same theme of defensive encroachment 10 minutes later: The England forwards again perform their surreptitious shuffle forward between set-up and throw, and they use the momentum gained to hurl Itoje well across the midpoint of the line in the air. That should have been another penalty to Wales.

Credit has to be given to Maro Itoje and co, however, for exploiting to the full the loophole the officiating of the lineout offered them, right to the very end of the game: 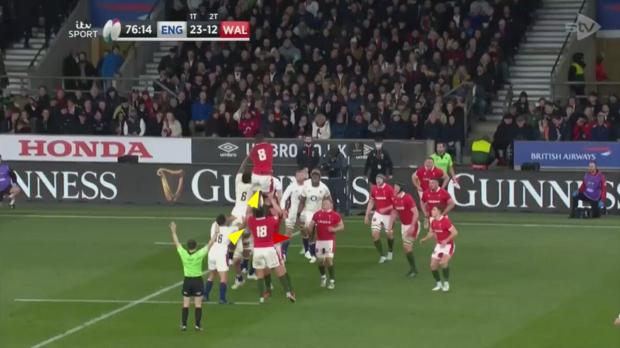 Taulupe Faletau is up in the air ahead of his opponent Courtney Lawes, but because England have pushed across the midpoint of the line, it is they who pick up the scraps that fall from the table. Would it have happened with Alun Wyn Jones in the Welsh lineout? There is little doubt he would have been bending Mr Adamson’s ear in order to get better outcomes for his team.

When Wales moved in for a bit of retaliation in the same area, they did not show the same street smarts as their opponents:

Wales don’t do the preparatory shuffle, and Beard is that much further away from the target, England replacement forward Nick Isiekwe. He is forced to hook the arm instead of taking the ball, and that really is a penalty.

Wales may have benefited from Mike Adamson’s largesse against Australia in November, but the boot was very much on the other foot at Twickenham over the weekend. In the 2019 Six Nations, Wales won the key game against their title rivals England, in the same round of the championship, and by much the same score (21-13). They went on to win the tournament and achieve the Grand Slam. In the process, they showed more savvy in their reading of both the opponents and the referee.

In 2022, the roles were reversed, and it was England who got the jump at breakdown time and in lineout defence. Wales were 12-0 down before they worked out refereeing preferences at the ruck, and they blew a series of lineout positions in the red zone because of Adamson’s refusal to enforce the one-metre gap at lineout. They will be kicking themselves, because you have only yourself to blame for failing to convert a three-to-one try count in your favour into an overall victory.