Wales player ratings: The Welsh came into the Autumn Nations Cup opener with Ireland at the Aviva Stadium desperately in need of a win, after five losses in a row. The exit of defence coach Byron Hayward from the set-up in the wake of their Six Nations loss to Scotland, if anything, only added to that pressure.

Wayne Pivac’s side did benefit from the return of flanker Justin Tipuric after tonsillitis, which saw him miss the home loss to Scotland. But this was another flat, world-weary and worryingly listless effort from the Welshmen. Here’s our Wales player ratings:

LEIGH HALFPENNY – 5
Wales were left to rely on his long-distance kicking, which summed up just how bereft of ideas Wayne Pivac’s team have become. The fullback may have been missing an incisor but the Scarlet’s smile was significantly less toothless than Wales in attack. Looked weary.

Will Scotland be repped on the Lions tour? Here’s Hamish Watson’s take:

LIAM WILLIAMS – 5
Got into Lowe early, shoving the Test newbie in the back after the New Zealander fumbled a potential try-scoring pass. We’re giving him 5 largely based on the resulting manbags. Lowe did run through him a few minutes later though and had the final laugh with a debut try.

JONATHAN DAVIES – 4
Now the old man of the Wales backline, ‘Foxy’ is starting to play like a 32-year-old centre. His long and sadly dense injury profile is taking its toll on the veteran, and he left the field after being on the receiving end of a big hit.

OWEN WATKIN – 6
His line speed and tackling was a significant factor in Wales’ impressive first phase defence, and was a nuisance in contact. Seemed up for it.

JOSH ADAMS – 7
Defensively sound, he clearly enjoyed repeatedly manhandling Andrew Conway in defence. On the rare occasion that he got any kind of good ball in attack, he stood out.

DAN BIGGAR – 5
Like many of the senior players around him, didn’t have any bright ideas to get he or his comrades into the game. Didn’t even direct any backchat at the ref, which was worrying. That’s not our Dan.

GARETH DAVIES – 6
Another player who appeared eager to give away as many sloppy penalties as possible. Getting under Cian Healy in the 51st minute was maybe his most significant contribution.

RHYS CARRE – 3
Put under huge pressure early by Andrew Porter, who won two consecutive penalties off the big Welsh loosehead. Wales ended up relying on the charity of referee Mathieu Raynard at scrumtime while Carre was on. Got the shepherd’s crook before half-time before a defensive scrum, the ultimate ignominy for a prop. He’ll learn from it.

RYAN ELIAS – 5
Carried aggressively from the off but his darts were about as accurate as a Pennsylvanian exit poll.

TOMAS FRANCIS – 4
Despite outweighing the Irish front row by about four stone, it was Francis and co that were getting pushed around. With that said, slimming down hasn’t suited Francis.

WILL ROWLANDS – 4
The giant Wasp didn’t help out his hooker – Elias – at the lineout time. Looks the part but needs to start putting up some big performances at Test level or he’ll find himself dropped.

ALUN WYN JONES – 5
Bringing up 150 caps is a world-first but you imagine it couldn’t have been further from Jones’ mind as Wales battled for forward ascendency. Triggered Peter O’Mahoney in the opening minutes, an early promise of some Welsh fire. It never came. A forgettable performance. 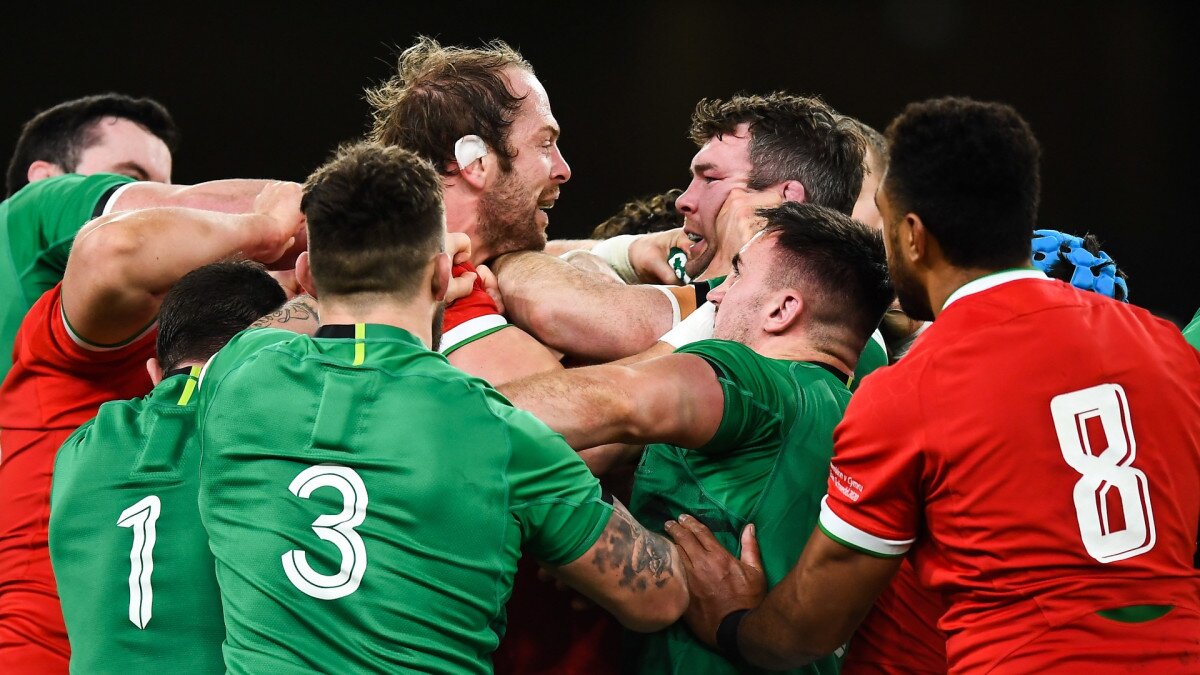 SHANE LEWIS-HUGHES – 5
A knock-on in the Irish 22 the 62nd was a get out of jail free card for Andy Farrell’s men. It’s very early days for Lewis-Hughes but you want to see more from the man known to his teammates as ‘Crazy’.

JUSTIN TIPURIC – 6
Not a barnstorming return for Tipuric, who was recovering from tonsillitis, but at least played with some endeavour in the second forty.

TAULUPE FALETAU – 6
Was physically contained by the Irish, and going on current form, will struggle to make the plane for the 2021 Lions tour. His try-saving tackle on Cian Healy was top draw though and he did play himself into the game as Wales enjoyed their second-half purple patch.

ELLIOT DEE – 6
With Dee on Wales suddenly started getting some set-piece stability. Some.

WYN JONES – 6
Things improved at the set-piece when he came on, which wasn’t hard considering they were in survival mode in the first half.

SAMSON LEE – 6
Came on for Francis in the 51st minute and – as with Wyn Jones – seemed to settle the Welsh scrum.

JAKE BALL – 6
An improvement on Rowlands, although that was practically a given. Should probably start.

AARON WAINWRIGHT – 6
Still trying to find the form that made him a World Cup bolter 12 months ago.

LLOYD WILLIAMS – 6
Looked sharp as part of a far brighter second-half performance for Wales. Needs to be a bit more careful when firing high speed balls at forwards knees.

CALLUM SHEEDY – NA
The Bristol Bear has repped England at non-Test level and Ireland at U20s, but he finally made his debut for country of his birth. Wasn’t on long enough to rate.

GEORGE NORTH – 5
A forward pass to start to his 100th Test cap wasn’t the ideal first touch. The game-breaking North of old is still very much dormant.

Testing times Are the All Blacks going to do the impossible and play less but make more money? Gregor Paul Pulling power The Crusaders have surprised the rugby world by making perhaps their highest profile signing ever. Patrick McKendry Case for the Crusader David Havili is showcasing his wide-range of skills week after week and deserves an All Blacks call-up. Ben Wylie Watershed moment Alice Soper is thankful ahead of the landmark fixture between the Blues and Chiefs Women's teams. Alice Soper Intellectual poverty Fluid movement of players and coaches means intellectual property is always going to be tough to lock down. Gregor Paul