END_OF_DOCUMENT_TOKEN_TO_BE_REPLACED

Thanks, Ross. Excellent article. Curiously, change 'Wales' to 'Australia', 'Pivac' to 'Rennie', etc. and the similarities are astonishing... and appalling!

Wasps brought an end to Northampton’s unbeaten start to the Gallagher Premiership season with a 26-20 victory at the Coventry Building Society Arena.

The hosts survived a moment of controversy at 20-10 up in the second half when replacement hooker Gabriel Oghre escaped with a yellow card for a high tackle on Alex Mitchell.

Northampton scored soon after through captain Lewis Ludlam, but the ever-reliable boot of Jimmy Gopperth helped take the game away from the visitors, who had gone into half-time level at 10-10.

Saints dominated the early stages, playing the opening 10 minutes in Wasps territory, and got their reward when Juarno Augustus charged through and offloaded superbly for the onrushing Sam Matavesi to score.

The away side lost Matt Proctor to injury after just 14 minutes, meaning an early introduction for Rory Hutchinson.

And Wasps hit back as Oghre and Dan Robson combined to set Zach Kibirige away down the right for a try on his 50th appearance for the club.

Jacob Umaga converted and the scores were level, despite Wasps having only had one meaningful attack in the opening 20 minutes of the game.

Augustus made a huge intervention to stop Wasps scoring again before Dan Biggar slotted a penalty after 26 minutes to put Northampton back in front.

Wasps leveled as Umaga converted a scrum penalty before missing a kick on the stroke of half-time.

Northampton were forced to withdraw full-back George Furbank at the break, bringing Frank Lomani into the action and leaving them with no further back-line replacements.

Wasps thought they had scored early in the second half, but Vaea Fifita’s effort was ruled out for a forward pass in the build-up.

The home side did go ahead for the first time 10 minutes into the second half as Umaga kicked a penalty earned at the scrum.

Umaga missed with another effort soon after, but Wasps were well on top and their dominance told when Thomas Young offloaded brilliantly for Robson to score.

Umaga converted to make it 20-10 to the hosts, but they lost Oghre to the sin bin for a high hit on Mitchell and Northampton soon scored, with Ludlam rumbling over from a lineout drive. 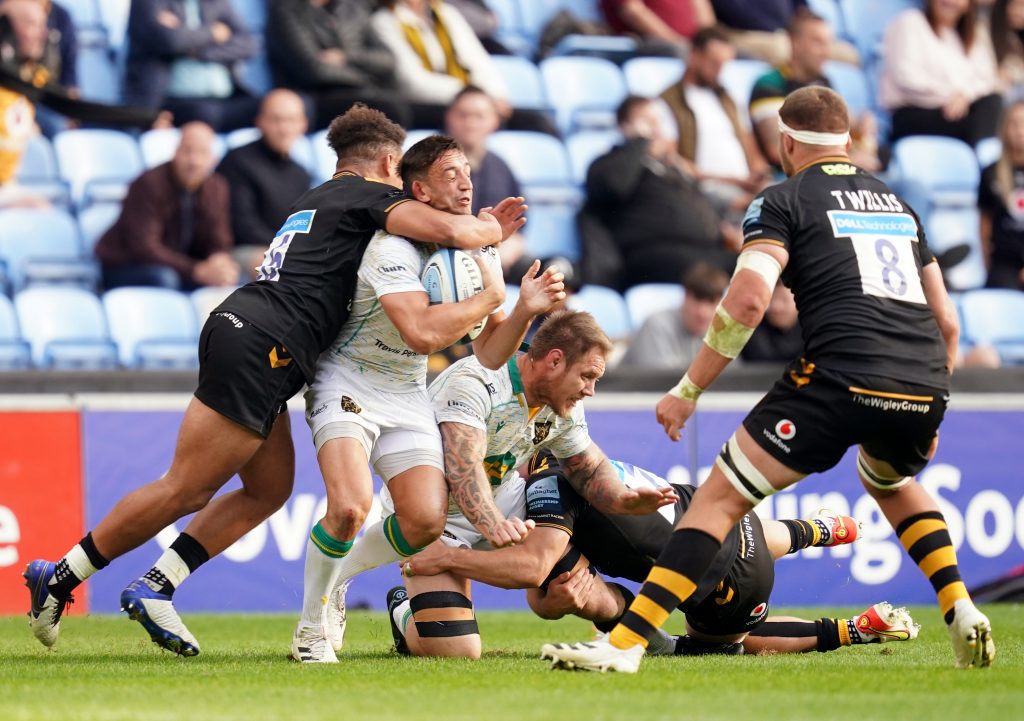 Biggar missed the conversion and Wasps missed a chance of their own at the other end as Umaga sent another effort wide.

Gopperth soon took over kicking duties, landing a penalty that put his team eight points up with 11 minutes to go.

He added another soon after before missing with a third attempt as the Northampton penalty count continued to stack up.

Saints struck at the death as James Fish went over from a lineout drive to earn his side a losing bonus point.

Wasps had done enough to secure victory, but the match ended on a sour note when James Gaskell went down at the end with an apparent ankle injury.