Northampton Saints will enter the final round of the Heineken Champions Cup group phase with the quarter-finals in their sights after edging out Benetton Rugby 33-20 at Franklin’s Gardens.

Centre Fraser Dingwall ran in the critical try in the 72nd minute when his footwork, combined with a hard line, swept him over for Saints’ bonus-point fourth try to bolster hopes of qualifying as one of the best runners-up.

Up until that point they had made heavy weather against spirited opponents, who at one point threatened to move eight points clear only for Tommaso Allan to miss a kickable penalty.

Much of Northampton’s problems rested with their line-out which malfunctioned alarmingly in the first half, losing five on their own throw.

The victory also appeared to come at the cost of an injury to Courtney Lawes, who failed to appear for the second half with England coach Eddie Jones watching from the stands.

Play was held up in the opening period as David Ribbans received treatment to his left ankle and after attempting to run off the injury he limped off, but it was the only blot on an otherwise buoyant start by Northampton.

Fly-half James Grayson pulled the strings as a back move released Taqele Naiyaravoro off his wing and ended with Harry Mallinder diving over in the right corner in the sixth minute. 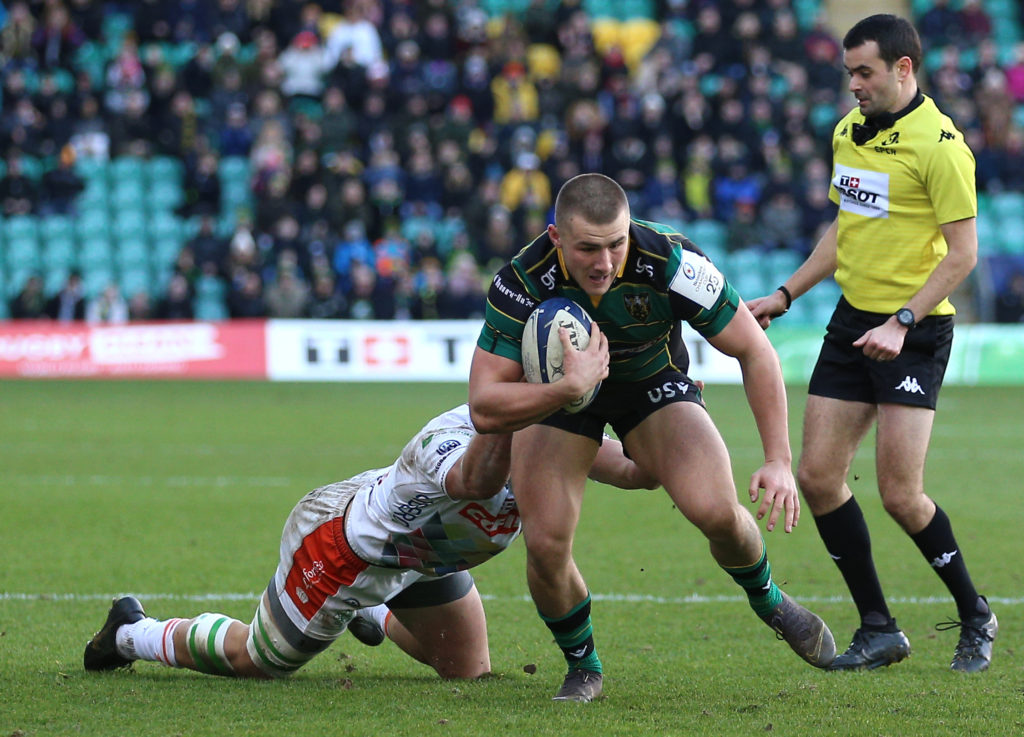 Mallinder was mobbed by team-mates in recognition of his first appearance after 15 months out with a knee injury.

For all their domination, however, Northampton Saints were unable to capitalise as chances came thick and fast.

A long forward pass to Ollie Sleightholme by Grayson wasted a clear overlap and when Benetton were shoved off their own ball at a scrum, poor decision making and a fumble by Naiyaravoro let the underdogs off the hook. 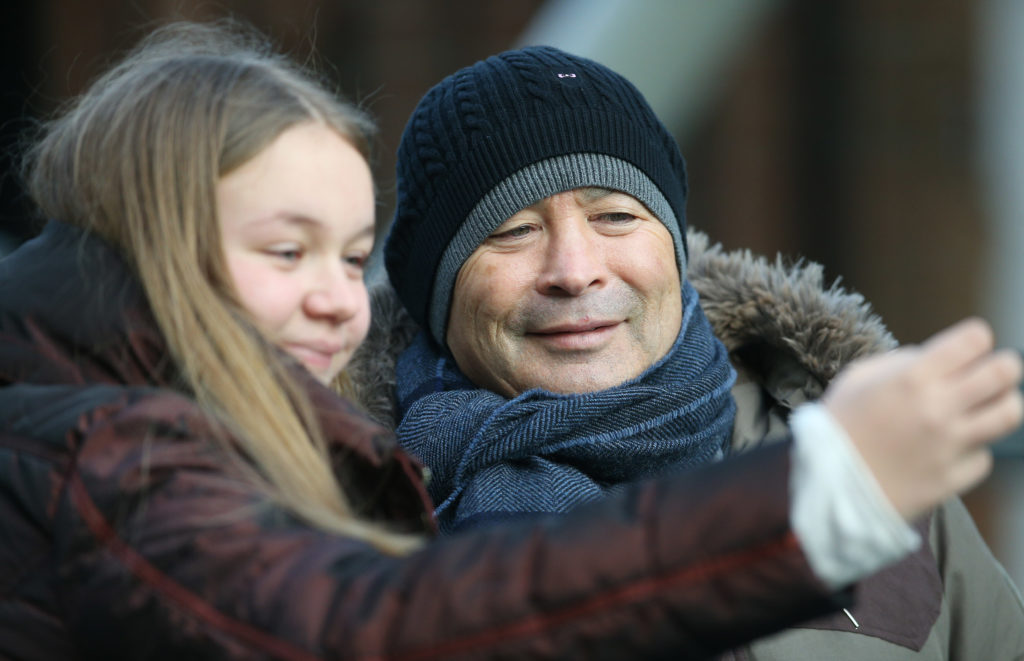 Saints’ line-out woes acted as a backdrop to the first half and in the 34th minute they slipped behind as a loose pass by prop Francois Van Wyk fell for Tommaso Benvenuti and the Italy centre won the race for the whitewash.

The try came while Bennetton’s replacement scrum-half Charly Trussardi was in the sin-bin for coming in at the side, adding to Northampton’s embarrassment.

It took just three minutes of the second half for Saints to restore their lead as a strong carry from Lewis Ludlam forced the visitors to scramble, opening a hole that was exploited by Api Ratuniyarawa and Henry Taylor, who crossed for Northampton’s second try. 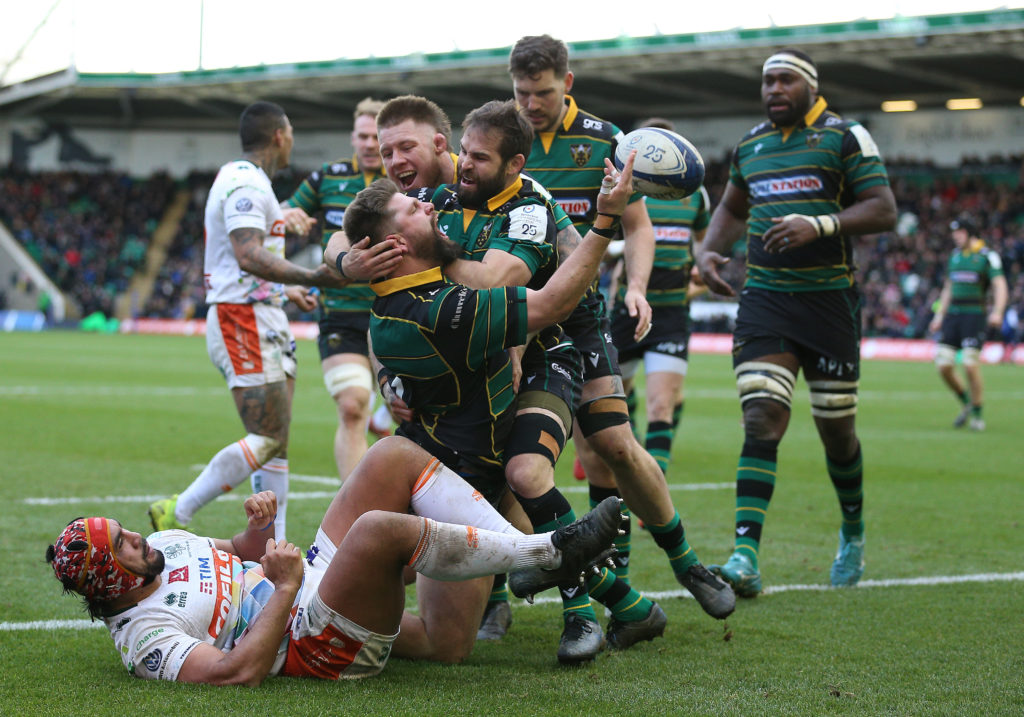 The resurgence was short-lived, though, as visiting hooker Hame Faiva finished a driving maul and when Allan converted Benetton led 17-12.

It then became the Italians’ turn to self-destruct as successive neck roles saw a penalty from in front of the posts reversed, costing a certain three points whose value was underline when Allan then missed a longer-range effort.

Northampton hit back through Van Wyk as Benetton struggled to reform their defence in time to withstand a sharp series of attacks but once again they fell behind when Allan landed a penalty.

Naiyaravoro appeared to have scored only for a knock-on by Rory Hutchinson two passes earlier to be spotted, but the key try arrived in the 72nd minute when a five-metre scrum saw Dingwall take a flat line to score.

Replacement back Andy Symons then put the result beyond doubt in the closing moments.

The match in images: 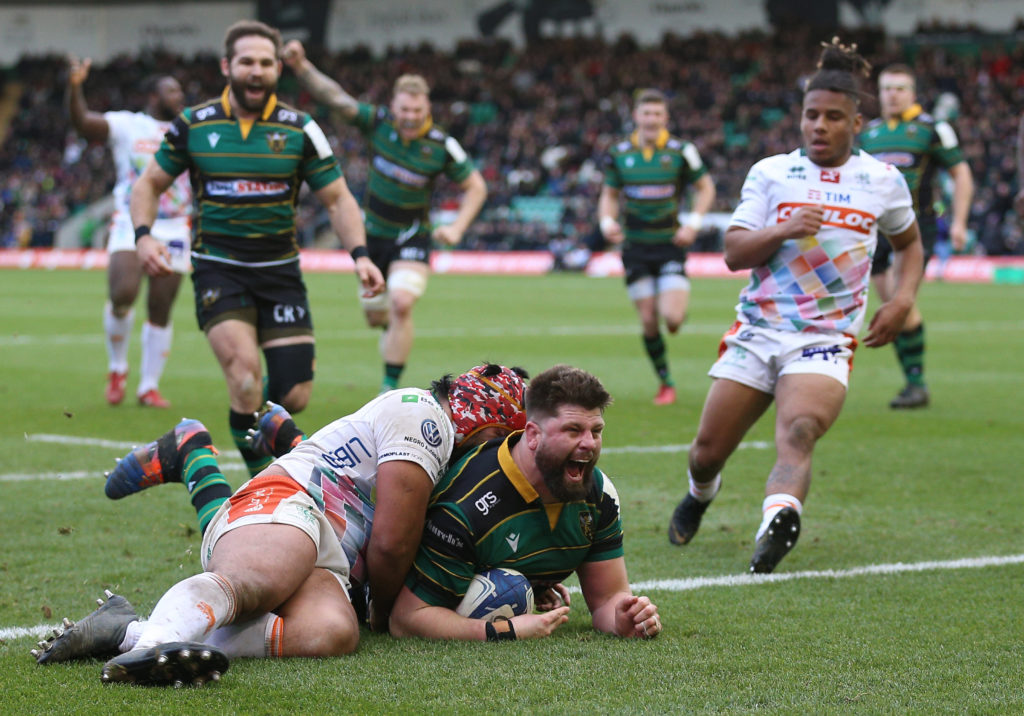 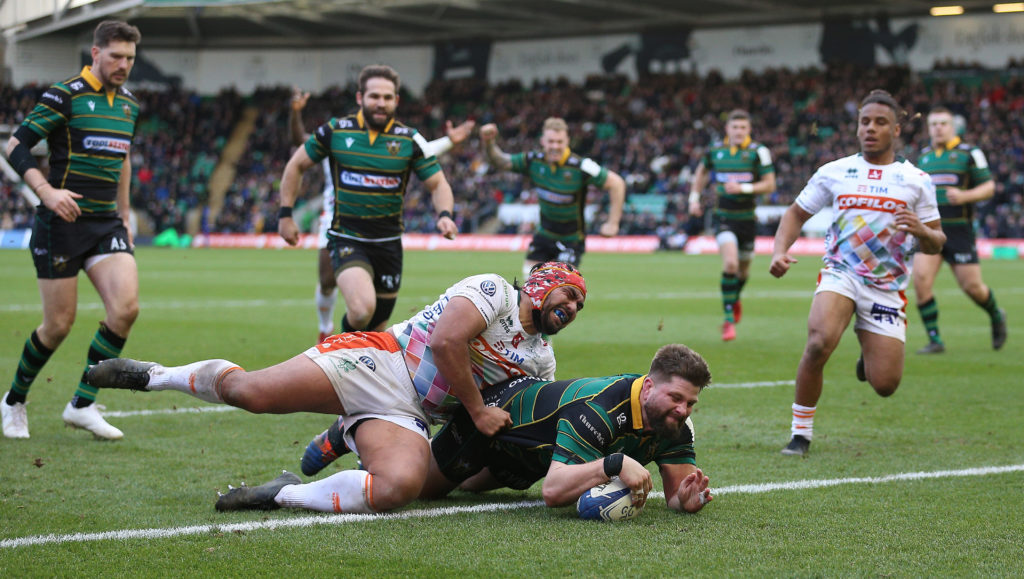 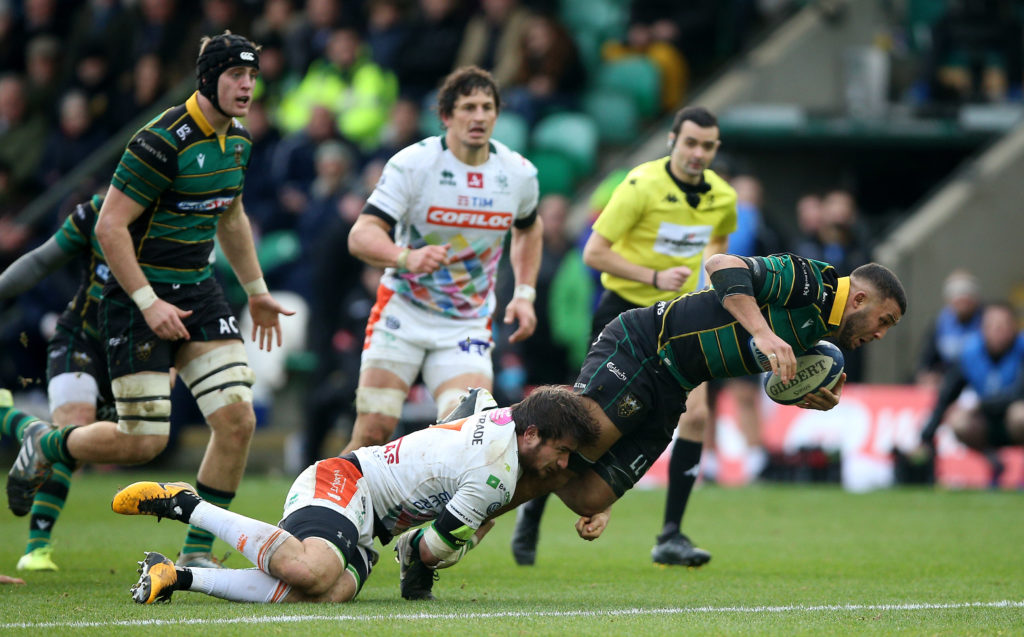 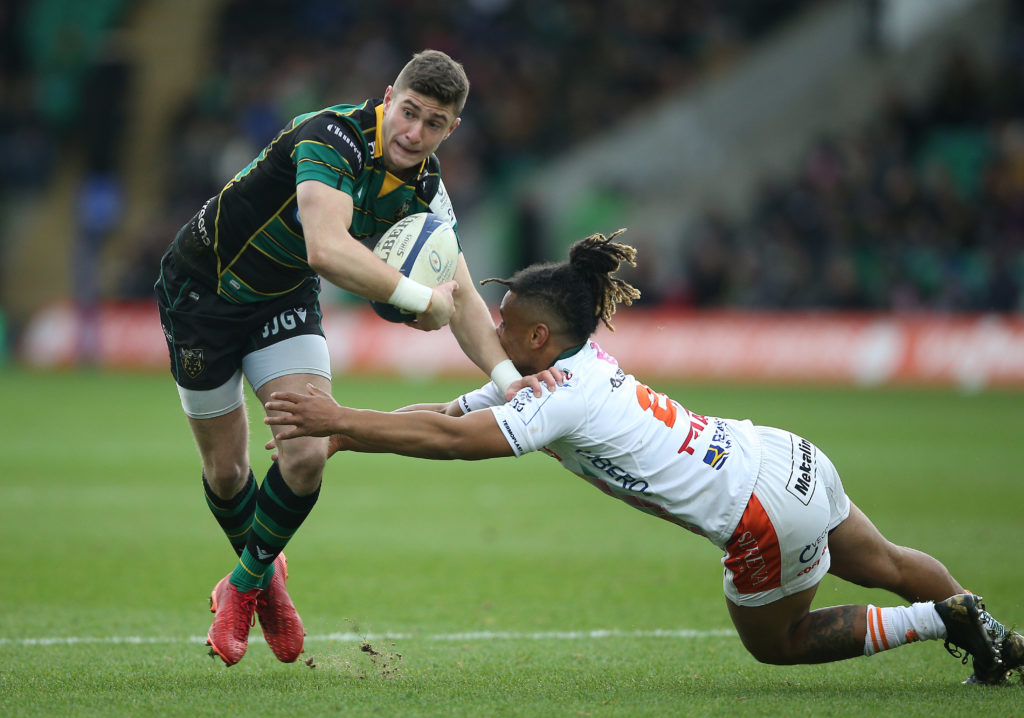 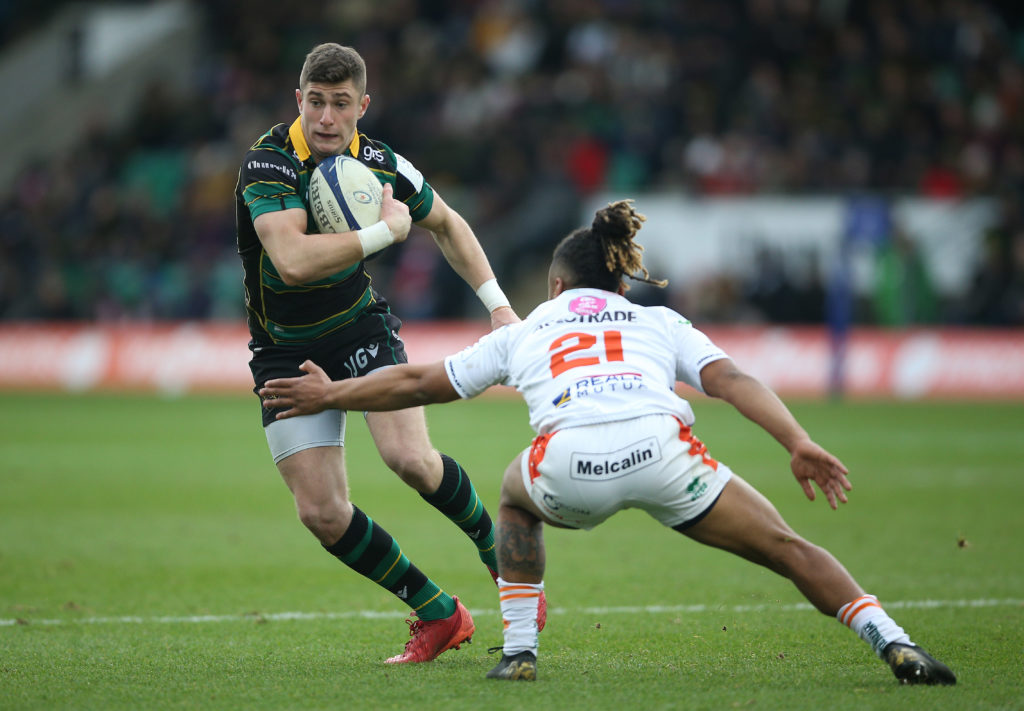 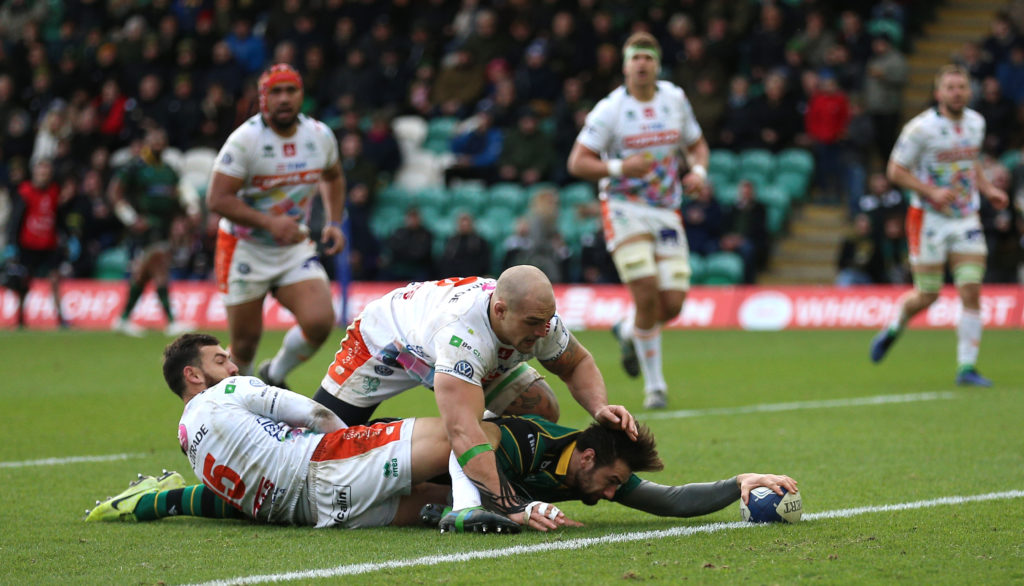 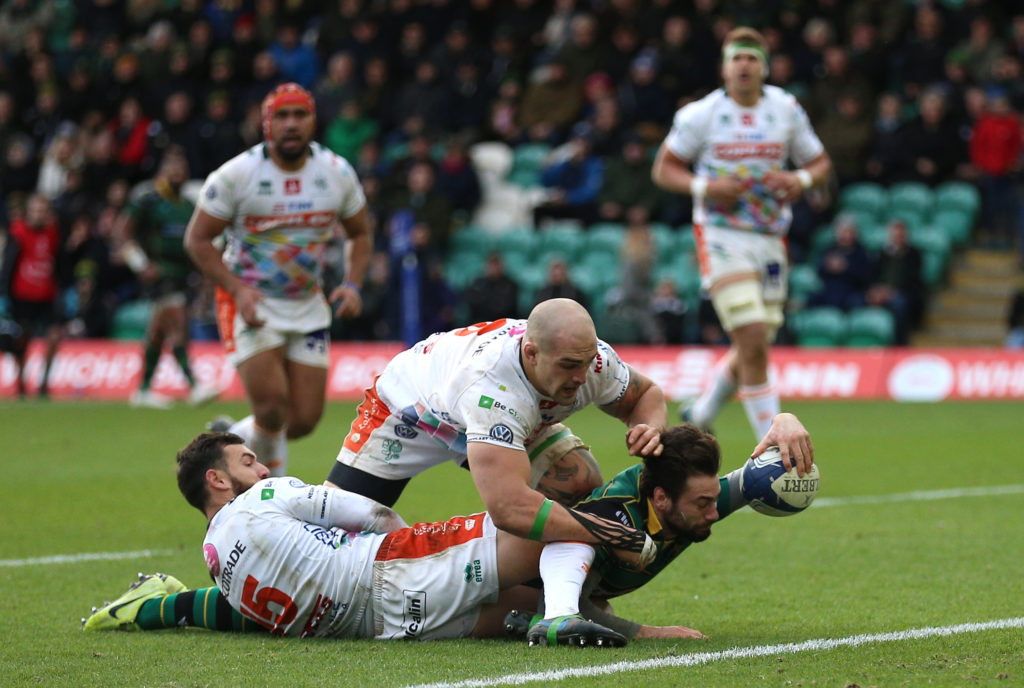 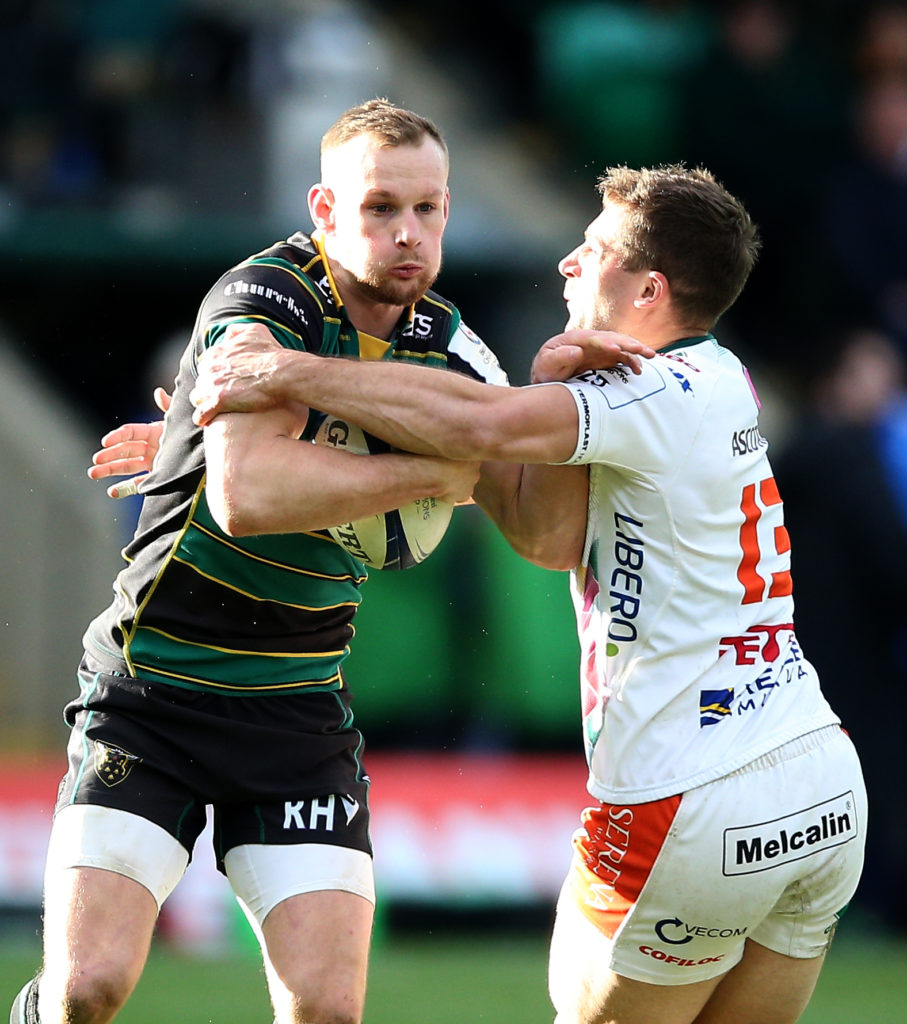 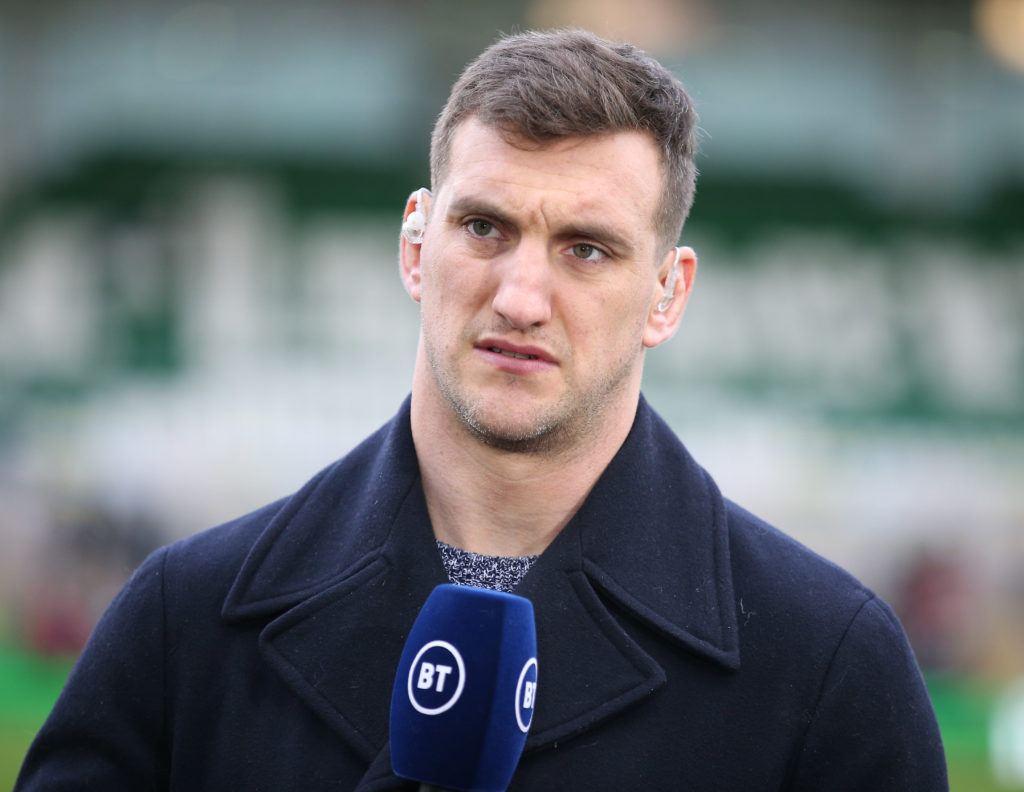 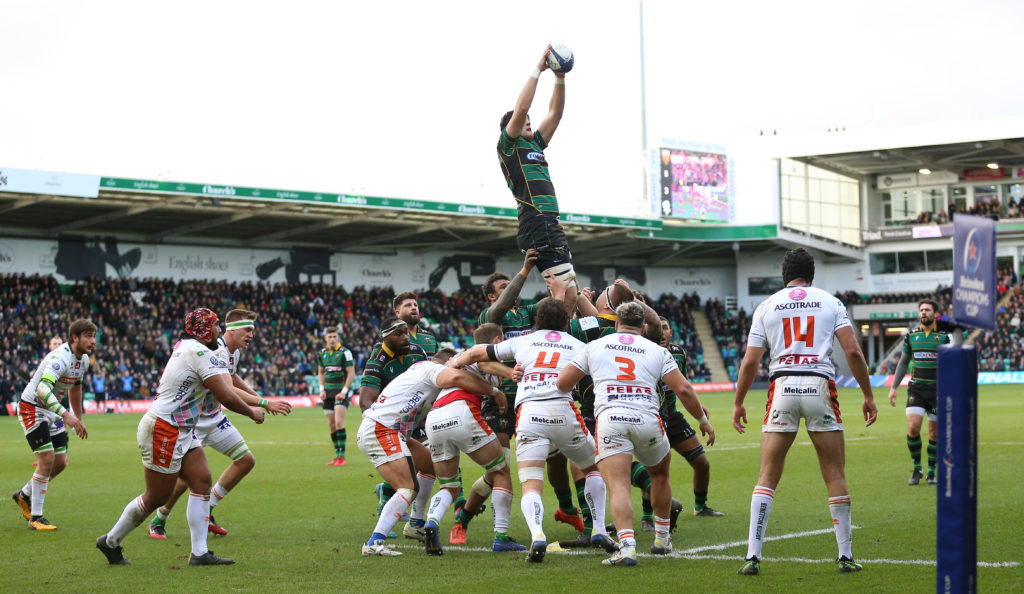 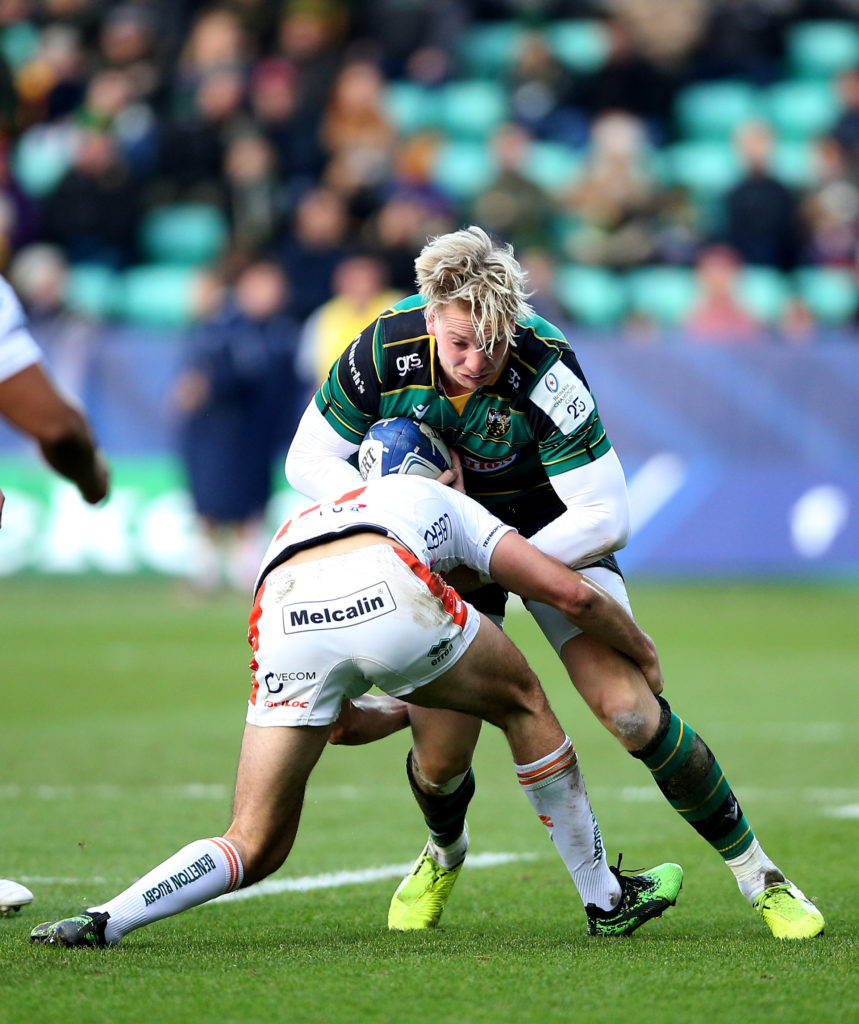 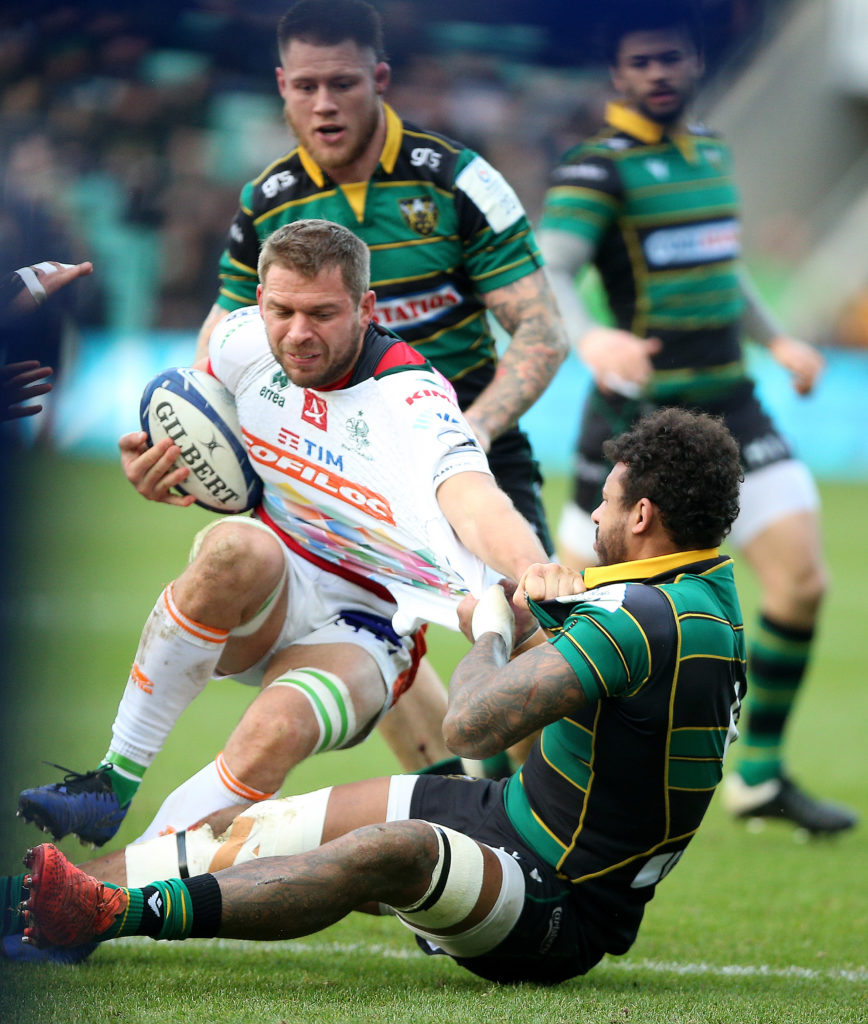 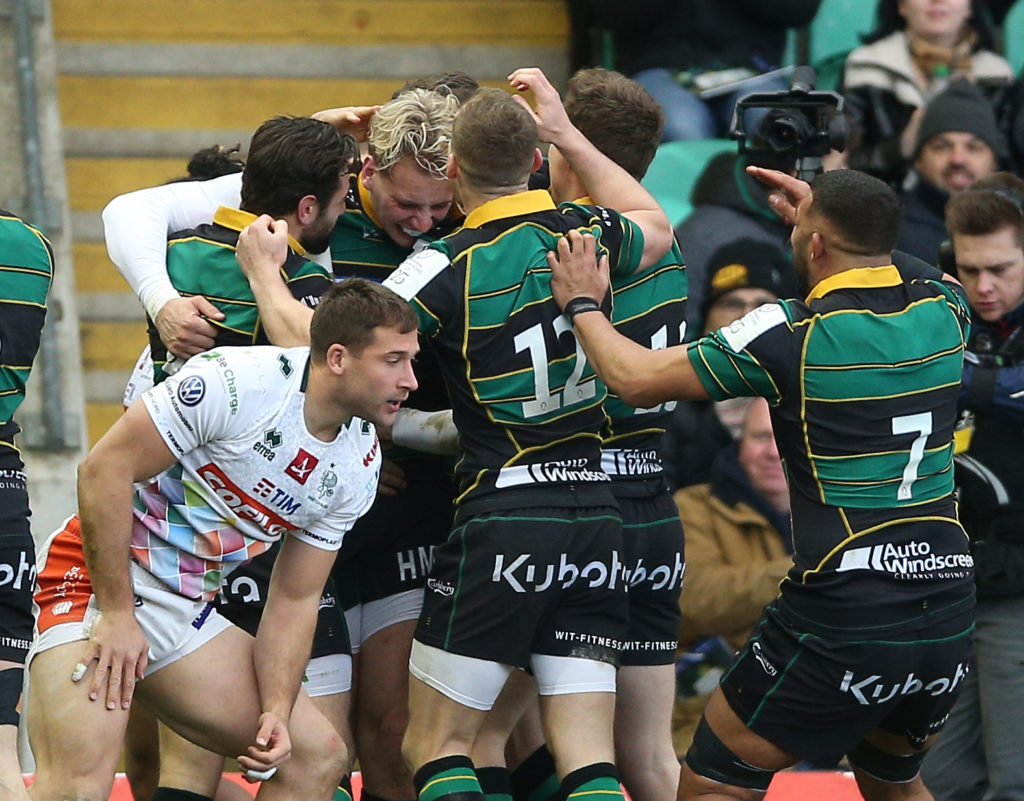 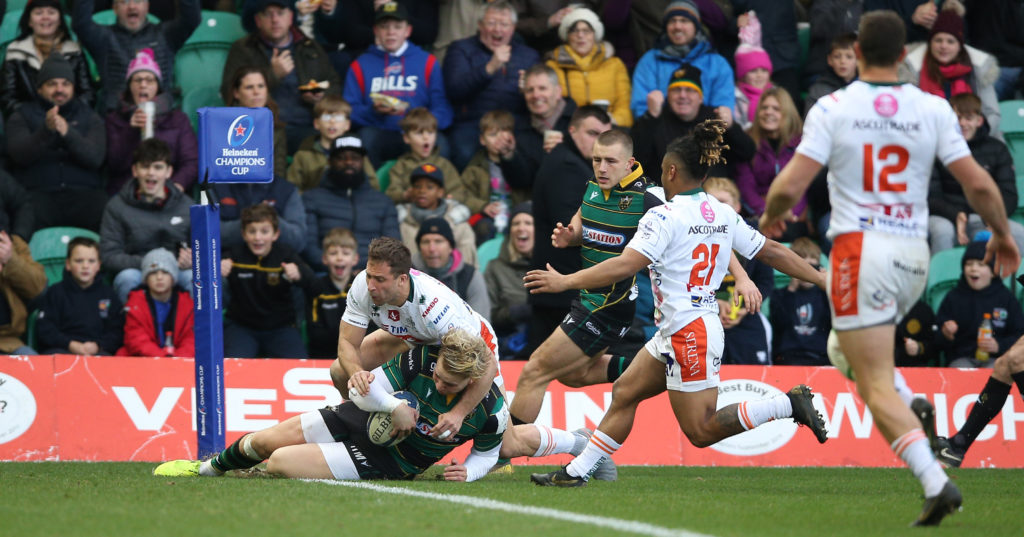 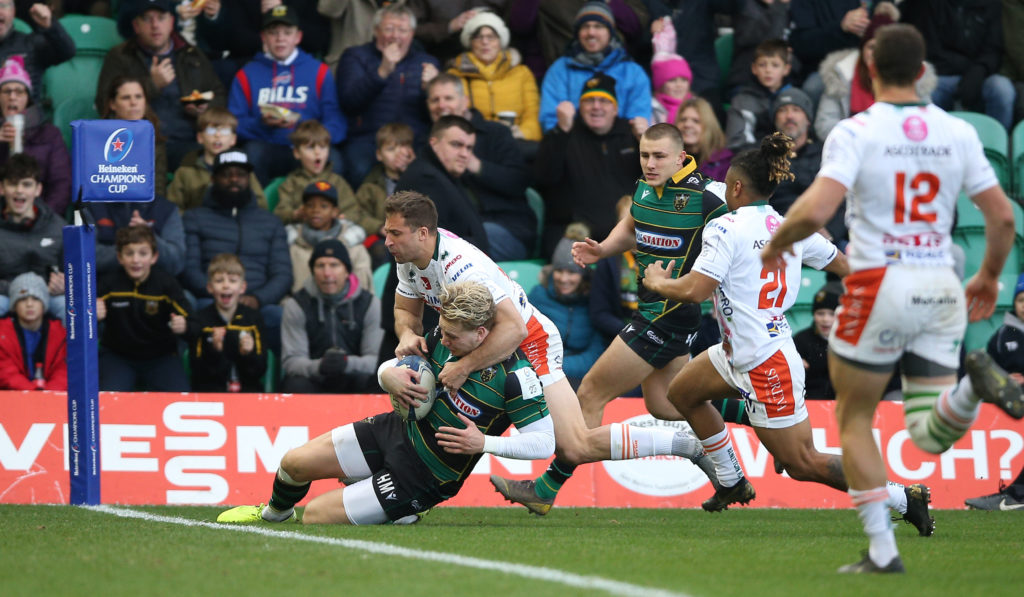 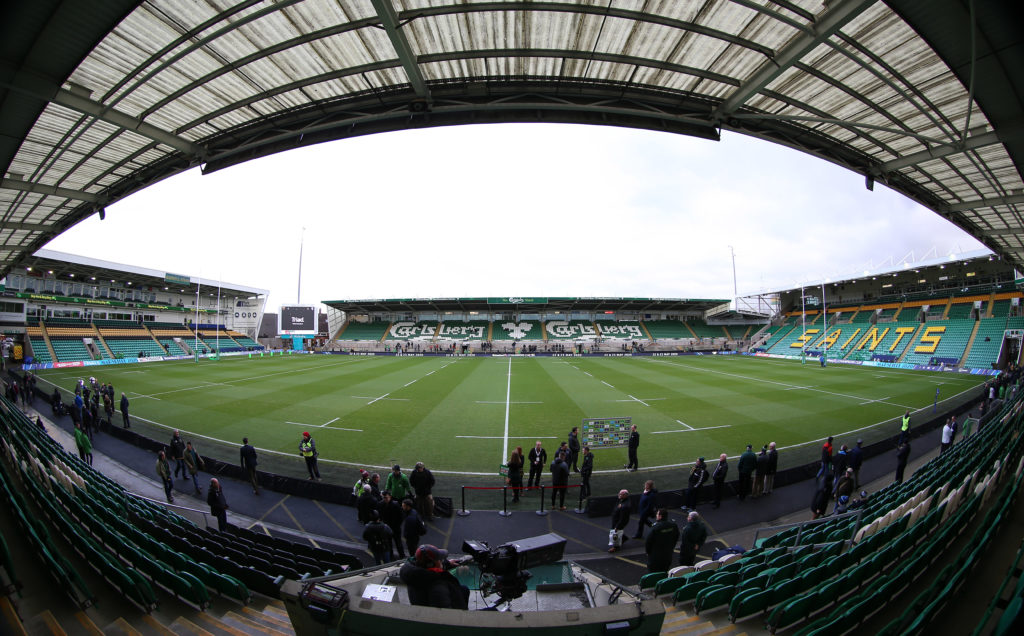 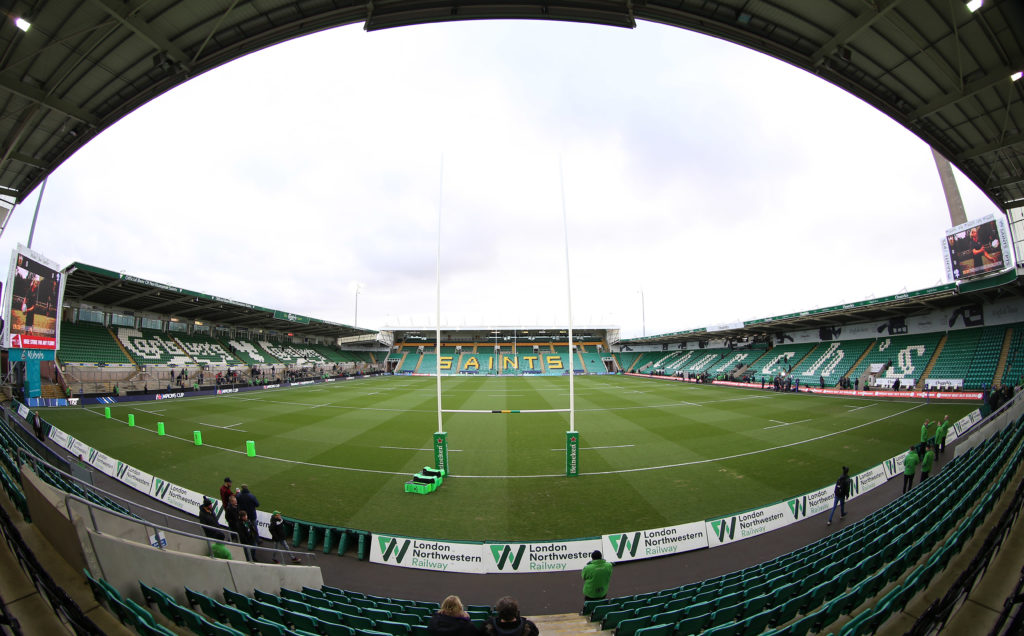