END_OF_DOCUMENT_TOKEN_TO_BE_REPLACED

Didn’t realise he was only 30, still a bit surprised he left Glasgow when he did.

I think this is backwards thinking. I personally back more than 23 players to put in a worthy shift in an AB jersey. Expecting the same team to play every game is unnecessary. It obviously takes a toll. Other option is to take a risk and promote talent, give them a shot, coach them. Name a position where NZ rugby doesn't have a single player to step in against say Wales?, No disrespect intended.

In a women’s rugby column, it would be easy this week to just discuss the horrific sexist, racist, homophobic and misogynistic abuse experienced by the pundits and commentators of Saturday’s Six Nations coverage. I’ve spoken before about how sexism is alive and well in rugby union, and how disappointing it is that we still endure it. It would be depressing to focus the whole column on the topic, but it needs addressing before I move on to talking about the exciting new format of the Women’s Six Nations.

One thing I will say on the topic is that I wholly disagree with the “it’s not real rugby fans” narrative. I don’t understand why anyone believes that ‘true’ fans of rugby are therefore not capable of discrimination. They absolutely are. It’s boring and ignorant to suggest that rugby fans have some kind of moral and intellectual superiority over fans of other sports. We don’t. Yes, players respect the referee and teams drink together after the game. Two players will have scuffles during the game and then shake hands after the game, but in doing so they will invite hundreds of cliché “this is rugby” posts on social media. I really think rugby needs to move on from this.

A good afternoon in the studio for ITAvFRA. As expected tho, many sexist comments about women working on men’s rugby. Those who comment are not worthy a response. Rugby is not a gender, it’s a sport and my accolades far out way what any of those sexist individuals have achieved!! pic.twitter.com/HkoJXD6HMv

What happens inside the brain during a concussion | Beyond 80 Knocked

What happens inside the brain during a concussion | Beyond 80 Knocked

The sexist, racist and homophobic abuse is also not ‘just what happens when anyone with a platform speaks out.’ Targeted abuse about a person’s characteristics is not the same as somebody disagreeing with a pundit or spokesperson, nor is it comparable with general abuse aimed at those with a platform. I’ve been told by so many white, straight men that this abuse happens to everyone. It doesn’t. They may well receive abuse, and it is never OK and it’s not a competition, but it is not the same as the abuse received by women, people of colour, or members of the LGTBQ+ community who are often made to feel unwelcome in rugby.

So before I talk about the new format of the Women’s Six Nations, I want to say well done to Maggie Alphonsi, Danielle Waterman, Gareth Thomas and Jill Douglas for their fantastic coverage on Saturday. I really hope they don’t have to face more discrimination in the future.

Right, so on to the Women’s Six Nations. Last week, the new format of this year’s tournament was announced. It will take place in a three-week window, from 3-25 April, following a format similar to the Autumn Nations Cup, with two pools of three teams competing to rank first, second and third. Each team will play two games, one home and one away, to decide their pool ranking. Like the Autumn tournament, the final weekend will see the teams the groups’ first places play each other, and second, and third. Pool A consists of England, Italy and Scotland, and Pool B is France, Ireland and Wales.

EXCLUSIVE: New research shows women rugby players are more susceptible to concussion, brain damage and potentially CTE than their male counterparts. @_JessHayden ??? with a difficult but important story for the sport. https://t.co/jsBaIInY3q

As divisive as the Autumn Nations Cup was, the new format of this year’s condensed Women’s Six Nations might make it a bit more exciting for fans as it is different from the men’s tournament. There will be men’s fans watching just to see how the new tournament works and if a similar format could work long-term in the men’s game. There are issues in the men’s rugby calendar, with many arguing that the men’s international periods take too long and are too frequent in the year. If that means more people watch the women, then that’s a great thing. I think we just need to get women’s rugby in front of a bigger audience almost by any means possible. It’s a great product now, and as I’ve been saying for months, is not just about supporting women anymore, but about exciting, explosive rugby. The more people that watch this tournament, the more are likely to tune in for the Rugby World Cup in September, attend games when possible, and support the women’s game.

The shorter tournament means two fewer games for each team, which isn’t great news for the teams who have had few matches in the last year due to coronavirus and match cancellations. Three of the 2020 Women’s Six Nations games were cancelled last year and many players have not had domestic rugby during that time. Unlike the men’s game, the women’s teams need as many international fixtures as possible to help grow the game. There’s also the important point that Ireland, Italy and Scotland still need to play World Cup qualifiers. World Rugby is yet to confirm if the Women’s Six Nations tournament will double-up as World Cup qualifiers, but the shorter tournament leaves more room for these fixtures to be played outside of the tournament if needed.

Before the pandemic cancelled so many fixtures, World Rugby was working on a new calendar for the women’s game, to encourage more game time and a more competitive international environment. The two fewer games in the tournament takes away crucial opportunities for teams to play together. That’s why I hope this tournament is a one-off, or that World Rugby supplement the shorter tournament with additional games in another international window. At the moment, Six Nations Rugby has not confirmed if they will keep the tournament in April – or if they will keep the new format – but I am relieved that Six Nations Rugby is trying something new. Rugby has the ability to be insular and reluctant to change but trialling these new tournaments and windows is crucial in the growth of the game.

The Women’s Six Nations isn’t a perfect tournament, and it still struggles to be truly competitive. Even with this year’s pool system, England v France is likely to be the battle for first place. But that really isn’t everything. I’m most excited to watch Wales Women, who I think will shock many rugby fans who have watched them in recent years. Many players in the Wales squad have been playing in the Premier 15s this season, and their new coaching staff (led by Warren Abrahams) is exciting. The Wales players have had more domestic game time this year than in any other season, and I expect this will serve them well in the tournament.

Above all, I hope that the exciting new tournament convinces somebody to become a title sponsor of the Women’s Six Nations. Six Nations chief executive Ben Morel said that Six Nations Rugby has had “several positive discussions” with potential sponsors, but they were yet to find the right partner. The women’s tournament should have a new sponsor by April, with the help of a consultant hired by Six Nations Rugby tasked with finding a sponsor.

It’s a great opportunity for women’s rugby to stand on its own two feet and provide us with some fair-weather rugby this Spring. This weekend has shown how unpredictable Six Nations rugby can be, and I look forward to the storylines which will unfold in the women’s game. 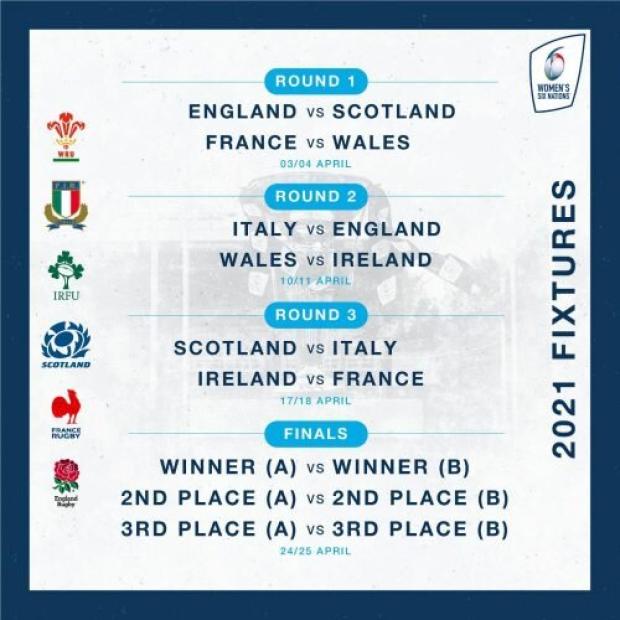