'It's a bit of a weird one having to play Northampton again... there will be a bit of chess here and there'

Lealiifano backed for Wallabies call-up Next
Back
Gallagher Premiership

'It's a bit of a weird one having to play Northampton again... there will be a bit of chess here and there'

Matt Kvesic caught RugbyPass on the hop the other day, ringing before the agreed interview time. His reason? Some afternoon shut-eye was needed to help get ready for Saturday’s Gallagher Premiership semi-final.

“We’re ahead of schedule,” he shrugged apologetically. “I’ll be asleep at four o’clock. I just haven’t been sleeping very well so I just need to catch up, that’s all. Nothing bad. It’s all good. Definitely, it [sleep] is important all the time. Just for your recovery and stuff like that. Just make sure you’re feeling fresh, not just physically but mentally.”

Kvesic is as busy as a bee just now, his prowess rightly acclaimed by his inclusion in the Premiership 2018/19 Dream Team unveiled this week and his nomination on the six-strong shortlist for the player of the year award won by Danny Cipriani.

Eddie Jones mightn’t agree. It’s still May 2016 since he was last capped by England. But the 27-year-old back row senses his game has come on a tonne this term, encouraging progress reflective in the way he breezily reviews his past nine months.

“It has been a good, fun season. I’ve been pretty happy with how I have played. I have gone back more to how I played at Worcester where I carried a bit more. I have had a bit more of an all-round game as opposed to having that tag of a breakdown nuisance. I have had a little more freedom to have a crack, play with a smile on my face.

Your team of the year ?

Hard to pick just one XV from all the fantastic performances in the #GallagherPrem ?

But here is your @btsport Dream team ?glistening with star-quality ?#PremRugbyAwards pic.twitter.com/kTP3xYhyiq

“You have peaks and troughs but this year has been one of the most enjoyable seasons I have had for a while. It has been a bit like no-pressure rugby where they have just said, ‘Go out and have a crack, enjoy yourself and we can review what happens after that’. That has been really good.”

It’s curious Kvesic’s long-ago stint at Worcester has cropped up in conversation. Not since 2013 has Sixways been his home, but that was where he first encountered Rob Baxter.

Exeter made a pitch at that time for Kvesic’s services, but he rebuffed them for Gloucester and only said yes at the second time of asking in summer 2017. Even now, the unorthodox manner of Baxter’s initial approach six years ago hasn’t been forgotten.

“It was when I left Worcester quite a while ago, that was the first time I spoke to Rob,” he said, harking back to a juncture when he had just turned 21 and was coming off the back of the busiest season yet in his then fledgling career.

“It was very different and quite refreshing. At the time, the move to go to Gloucester was right but obviously hindsight is a wonderful thing. But there we are.”

Big thanks to @ExeterChiefsSC. You guys make it special for us all week in & week out, home and away! Let’s all get excited for this week ? https://t.co/UdJDdriXxQ

Baxter’s fingerprints are all over the Chiefs, the now giant of a club he took from the nether regions of the Championship and turned into a Premiership title-winning outfit. Having admired this work from afar, Kvesic is enjoying seeing first-hand the way the canny coach goes about his business.

“Everyone expected them to come up and probably head back down, but the way they approached the league back then was refreshing. It was really exciting to watch them play and they have developed their game into what it its now.

“Top of the table last year, top of table again this year, early home semi-final qualification, all that sort of stuff. It’s just hard work put in week in, week out.

The @premrugby league table after all 22 rounds in the regular season were played. @officialexeterchiefs top the league for a second consecutive season

“In the grand scheme of things it has happened in a short space off time. I know it has been nine years (since Exeter were first promoted), but in rugby that is quite a short period and the way they have managed to sustain performance in the last few years is pretty impressive.

“The beauty is he is very level-headed, so there is not very many ups and downs. He doesn’t lose his rag, doesn’t get too excited. As rugby players that is what you want. You want to know where you stand. There is a time and a place for a kick up the bum and a pat on the back, but all the coaches here are very level headed, quite pragmatic about everything. That is quite important. We’re all on the same page, not going up and down like the rollercoaster ride.

“It’s a pretty relaxed club and we have approached this week like any other. That’s important, not to make too big a deal out of what the occasion is otherwise you can create nerves that wouldn’t normally be there. It has been pretty chilled out, smiles on our faces. We’re just looking forward to it.” 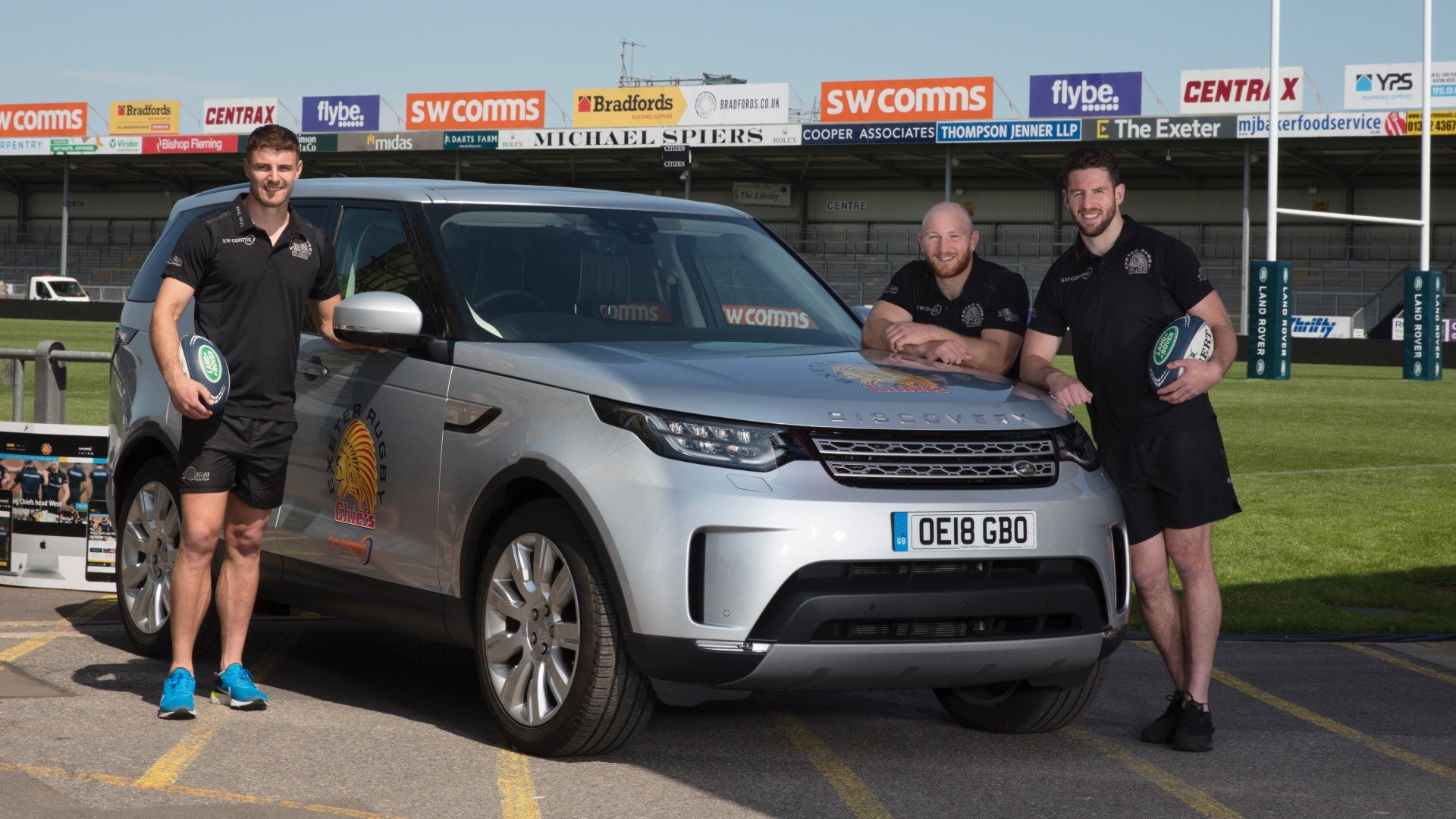 Exeter’s Ollie Devoto, Matt Kvesic and Alex Cuthbert were busy in midweek representing Land Rover who are a key partner of HITZ, the sport for change programme that uses rugby to motivate young adults. Follow @LandRoverRugby

So much so that Kvesic – along with Alex Cuthbert and Ollie Devoto – took time out midweek to participate in a Sandy Park training session with participants of HITZ, Premiership Rugby’s sport for change programme.

“I got stepped by a few kids, burned on the outside a few times, and it was good fun,” he joked. “I really enjoy that sort of stuff, that connection (they have) with the club, it’s beneficial for them. They are kids who have struggled in school or have not necessarily helped themselves all the time.

“Rugby prides itself on its discipline, its laws, its rules and the way it handles itself and that is what HITZ does with the kids, installing through rugby those values and trying to push that into their lives a little bit.”

Turning back two Exeter, semi-final Saturday will be a touch weird for them. Chiefs must go head-to-head with Northampton, whom they trounced 40-21 only last Saturday. Back-to-back meetings are usually the sole preserve of the Champions Cup every December, not something that crops up in the Premiership.

Having beaten Saints comprehensively, there might be fear complacency could creep in. However, Exeter’s recent run – defeats to Wasps and Saracens either side of a scratchy win over Harlequins – should ensure nothing gets taken for granted from one Saturday to the next. 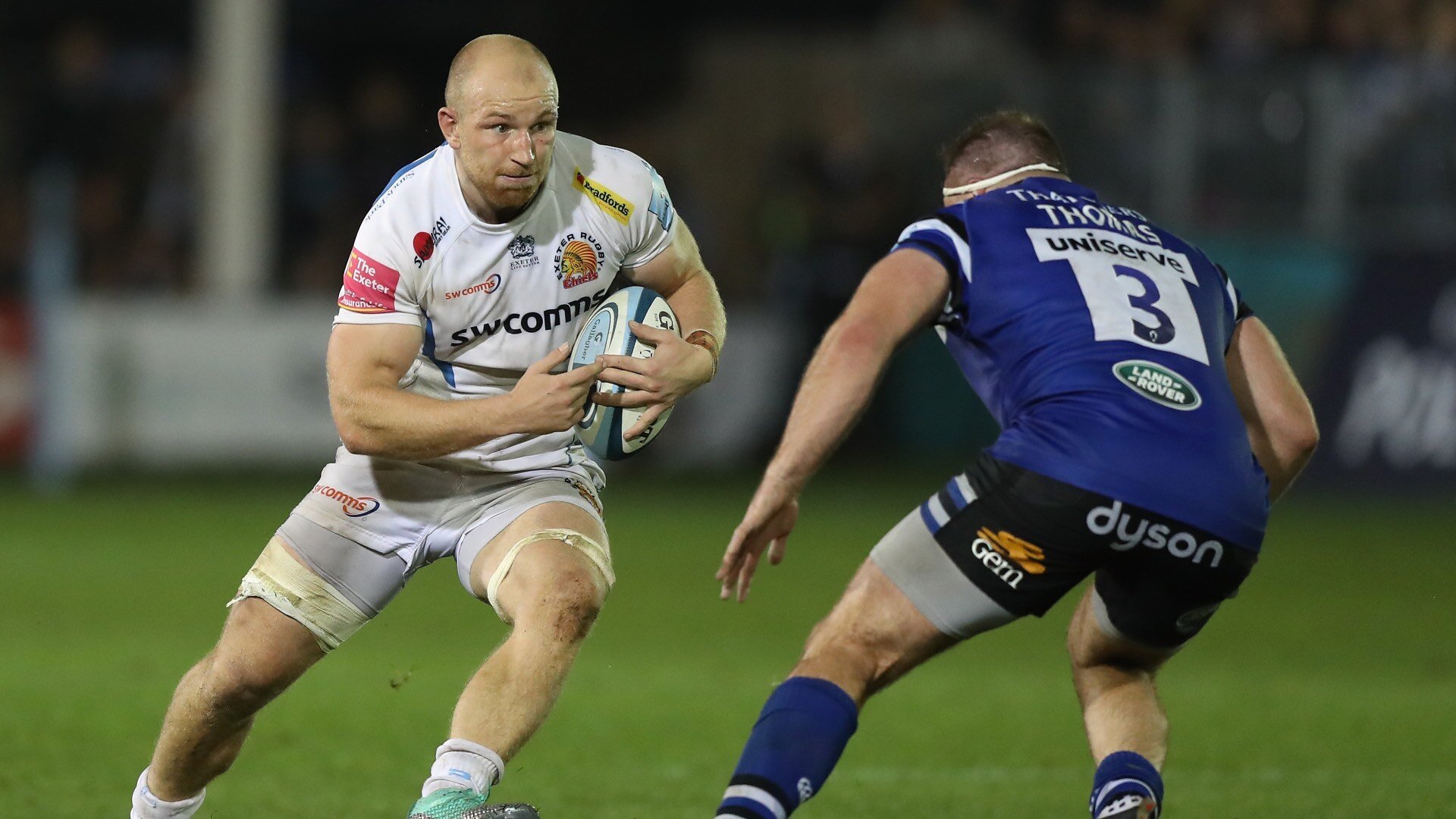 “They will probably have some plays and have looked at things we maybe showed in the last game, so you’re sort of preparing for things you’re not too sure about. But at the end of the day it’s just another game. Yes, it’s a semi-final, it’s knock-out rugby, but ultimately we’re back at home again, playing the same team, and hopefully we can bang in a good performance.

“Maybe confidence is the wrong word. Maybe more frustration. It creeps in and it becomes a ‘We’re not playing our best, why aren’t we playing our best?’ Or we try and fix things that aren’t there, or try and do things we don’t need to do.

“That does knock your confidence a bit if you’re not playing as well as you can, but it wasn’t panic stations or anything, more frustration that we knew we had a lot more in the tank than we delivered over the last few weeks or so… but we have fixed that for this weekend.”

Having missed last year’s decider, Kvesic would love nothing better than to revel in a fairytale finish to the season. “It would be huge (to win the title). Every rugby player want to top the table and win the Premiership.

“It goes without saying. I’m the same and I’m lucky to be a small cog in a pretty well oiled machine all year. It would be a massive honour. To win would be really nice. Fingers crossed. We have a big job this weekend and then anything can happen in a final.”

WATCH: The sixth and final episode of The Academy, the RugbyPass documentary series on Leicester Tigers