White to play two cards Next
Back
Internationals

'I was stopped by police. They asked, Do you have a permit? Saying you were going to hospital for a birth was good enough reason to get past'

George Biagi still can’t get his head around the ‘new normal’. Northern Italy at this time of the year is usually a lively, blissful place; its welcome stretch in the evenings hinting that summer is just around the corner, ready to be giddily embraced. This grand annual vibe, though, has turned sour in recent weeks, gone dark. With the killer coronavirus at large laying waste to so many of Italy’s population and the country in lockdown, life sure ain’t what it used to be.

No sooner had he picked up the phone to RugbyPass did the Zebre second row immediately highlight the sharp transformation. He was just back in the door from a shopping escapade. Before, it would have been a leisurely, neighbourly excursion to warm the soul. Bellissimo. Now, it’s a chore that can’t be completed quickly enough.

“Italy has been hit pretty hard compared to other countries,” he said in sombre reference to a death toll that has frighteningly surged past the 9,000 mark. “The new normal is very different. It’s almost surreal. I just went for some grocery shopping. I live in a small town, about 10,000 people just outside Parma. It’s normally quite busy around lunchtime but in the main square, there was just no one about.

“Most of the shops are closed other than pharmacies and grocery shops, and everyone is wearing gloves and masks. It looks like you’re in a movie. It’s very low noise, there are hardly any cars going around. The country is functioning but it is very, very different.

“At the beginning, no one really understood how serious and the extent of the virus. Even myself with some of the other players, is this supposed to be going on and is this necessary? Then as things develop you realise how serious this is and you’re taking the two-metre distance, you’re wearing masks, you’re wearing gloves and doing everything you need to, going around washing your hands.

“Initially, I was constantly looking at the news. It is important to find out when the government comes out with a new decree, but you get tired of listening to the same news over and over… it [the death rate] is terrible news. There are so many people dying…

“We’ll be talking about this for years. It’s going to have a huge effect, much like 9/11 on everyone around the world. When things get started again the government really needs to step up and see what it can do to help the most vulnerable and then from there on see can everyone help everyone else.

“Everyone is hoping things will go back to normal as soon as possible, but it’s going to have a big economic toll on everyone. I have got friends who have shops and they can’t open. They don’t know what is going to happen when they do reopen.

Amid the darkness, Biagi was privy to a brilliant ray of sunshine, the birth of his third child, Ottavio, on March 14. The hospital experience gave him and Elisa a first-hand glimpse of how those at the front line in the fight against coronavirus are admirably sticking to their task. “When we went into hospital the work that all the nurses and the staff were doing, it is really incredible and really commendable given the tough conditions everyone is in at the moment and working above themselves.

“It was very strange. When you went to the hospital at eight or nine o’clock in the morning, you expected traffic on the bypass and there was no one there, it looked like a Sunday morning. I was stopped by the police. The police asked me, ‘Where are you going? Do you have a permit to go?’ Saying you were going to the hospital for a birth was a good enough reason to get past, but it was trying times. 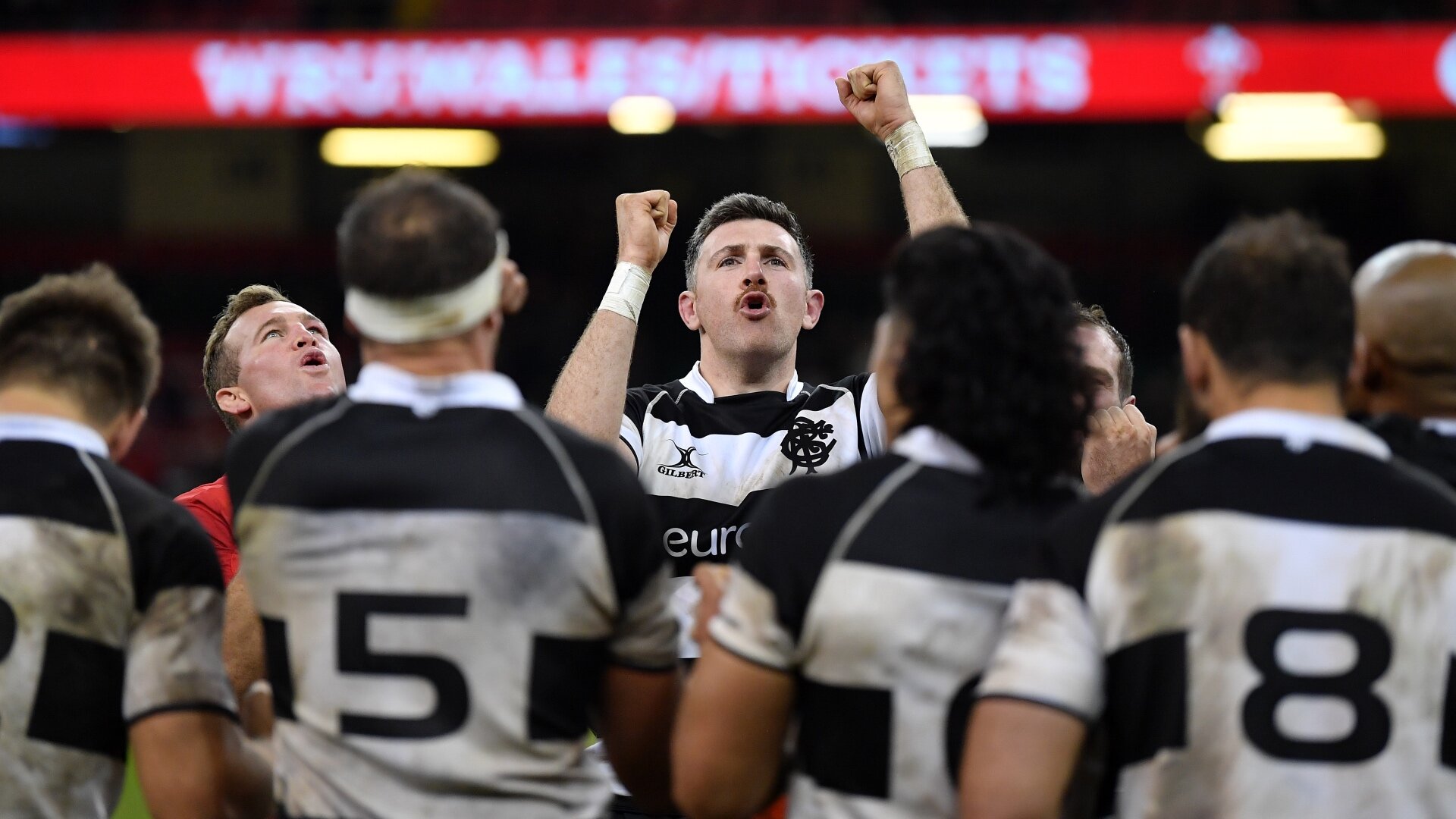 “Luckily they [Elisa and baby] were in and out in 48 hours. They don’t want to keep you in there. If everything is good and the baby is healthy, they try and get you out as soon as possible… that is an upside (with no rugby), you get to spend loads of quality time with the kids when potentially I could be away training or away playing for the whole weekend.

“Annasole will be four in June, Martin has just turned two – there was a party on March 18 and it was just the five of us, so that was a bit strange. But it’s really great. I mean, there is homeschooling, drawing, colouring, reading books, also refurbishing the house. All the people who were in working are no longer in here anymore and I’m doing the odd jobs, painting here and there. Plenty of things to do.

“I don’t think I’m going to get bored. There is not much time to be playing PlayStation or anything like that. You keep yourself very busy. Obviously the other side of that, sometimes you want to strangle everybody in the house, but it’s just part of the normal ups and downs for family life. At the moment we are really enjoying it and trying to get the most out of it. If it had been just a normal month I would have been away most of the time and not enjoying these key moments.”

The downside has not been able to share this joy in person with the wider Biagi family. Needs must, unfortunately. “My mum and dad live in Tuscany,” explained Scotland-born George, who initially came to Italy for university before taking up rugby professionally. “My brother lives there as well, and I have got a lot of my family who live in Padua. Everyone is very affected. The north of Italy – Milan, Bergamo, Padua, Parma – has really been hit very, very hard by the virus.

“Not so much where my parents are living at the moment, but they can’t test everyone so we don’t really know the extent of the virus everywhere. In the south of Italy at the moment, it’s not as bad as the north. Hopefully, it can stay that way, especially as hospitals are not at the same high standard as they are in the north.

“My dad is in his late 60s and it has been explained to him he has to stay at home and can’t go about his daily routine. In the beginning, it was difficult. Even to my grandmother, explaining why she has to stay home. She has been through a world war and is definitely not afraid of a virus, but for them to understand how serious this is isn’t easy at times. But now everyone is at home, everything is closed and you can’t really go anywhere.”

It was the cancellation of a women’s Six Nations match against Scotland on February 23 that first brought the coronavirus into the sphere of Italian rugby. Zebre had played at the same Milan stadium just two days earlier, hosting Munster to kickstart a weekend-long festival. They had a lucky escape given the scale of the health crisis that has since unfolded.

“That weekend was just before it [coronavirus] became front-page news. We managed to play a game and didn’t know at the time that it was potentially high risk. Thinking back now it would have been very high risk, but luckily no one at the club has contracted the virus that I know of.

“After the Munster game we had a week off before we were meant to play Ospreys, but as the news unfolded and the government took further steps, we were told to stay home, analysing games, looking after our bodies as well as we can with what we are eating, what we are doing.

“You are confined and restricted, you can’t even go outside now to run. You’re confined to the premises of your own home. Gradually the list of things got more strict and we’re waiting for what is going to happen in the next few weeks, how things develop to see if this curve starts to drop and there are fewer deaths and contagion and people getting ill.

“I’m very lucky. I’ve got a garden and was out there the other day doing a bleep test, going from cone to cone. It’s not something I particularly enjoy but at least you’re getting that sweat on. Also, some boys have been able to get their hands on watt bikes and some rowing machines.

“Trying to stay fit, you do get creative. Lifting crates of water. Lifting pallets of pellets from the stove. We do have exercises that have been sent out to us from the S&C staff and you do try to keep on top of that, but it is really tough on everyone.”

Last capped by Italy in 2018, the 34-year-old has no idea when rugby might restart in the virus strikes country. All he knows is the importance of staying safe and healthy. “There are talks about when we can get back playing rugby. Hopefully, it is before 2020/21.

“I mean, it is only late March and it’s a long way to 2020/21, but I have no idea. A lot depends on how the virus unfolds in the rest of Europe and the southern hemisphere as well. The most difficult thing at the moment is to plan and predict because no one knows how things will unfold in a week, let alone a month or two months’ time.

“Not going to training for so long is all very surreal, but we are just taking it a day at a time and hoping things get better as soon as possible. The cities are all dead. There is no one around and here in Parma, the mortality rate has been one of the highest in Italy. Bergamo, there are 1,800 30-year-olds with pneumonia so it is really affecting all age groups and it’s important for everyone to understand that. It’s not like if you’re 30 you’re immune to it. It does have serious consequences. There may be a little less risk – but everyone is at risk!”

WATCH: RugbyPass goes behind the scenes at pre-season training in Zebre