The powerhouse centre has been absent since tearing a hamstring during his country’s Autumn Series win over South Africa, and after making this successful return England supporters will hope he is able to play a role in the later rounds of the Six Nations.

Sale’s prospects of repeating last season’s progressive campaign received a further boost when Tuilagi was joined on the field by South African World Cup winning scrum half Faf De Klerk who has also been a long-term absentee.

Tom Roebuck and Robert Du Preez both scored two tries as the Sharks picked up their first away win in the Gallagher Premiership, and they did it in style with a convincing 36-14 victory over the reigning champions.

It was only a second success for Sale at the Stoop since 2008 but this victory was never in doubt against a subdued Harlequins who badly missed the inspiration of England’s Marcus Smith and Alex Dombrandt.

Ewan Ashman was also on the try-scoring sheet for Sale, with AJ MacGinty adding a penalty and four conversions.

Sale had the first chance for points but MacGinty was off-target with a long-range penalty, although he was soon on target with a much easier shot after Raffi Quirke’s elusive run had forced Quins into offending.

After 16 minutes, Sharks scored the opening try when swift passing from their three-quarters and a well-timed pass from Luke James gave Roebuck the opportunity to squeeze over in the corner.

An excellent touchline conversion from MacGinty into the blustery wind gave the visitors a 10-0 lead at the end of the first quarter.

Two minutes later, Roebuck picked up his second and again it took some scoring as the wing sailed past Quins full-back Tyrone Green to reward some excellent handling from his inside backs.

The first half continued to be one-way traffic and it came as no surprise when Sale scored their third. Five metres out from the try-line, Quirke tapped a penalty and the hosts’ defence was nowhere as Ashman crashed over. 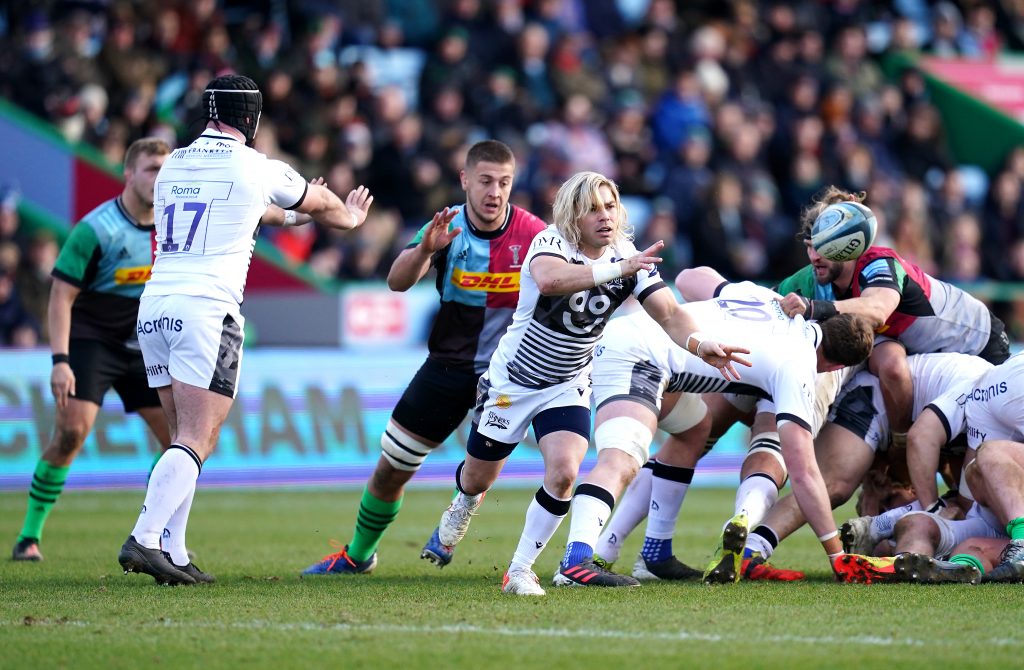 Shortly afterwards, Ashman limped off to be replaced by Curtis Langdon before Quins grabbed a lifeline when Viliami Tualani provided Tizard with a scoring pass.

Sale should have denied them that by kicking the ball into touch when the clock was in red. Instead they elected to attack from a position near their own line before losing possession, with Quins taking their opportunity.

Sale still held a handy 22-7 interval lead and they should have extended that when Roebuck intercepted a pass from Danny Care to race away. The wing looked certain for a hat-trick but with a superb cover tackle, Allan dragged him into touch just short of the line.

The visitors suffered another injury setback when Sam James replaced his brother Luke, who was badly shaken up in a tackle.

The next score was crucial and it went Sale’s way when Du Preez dummied his way over to leave Quins needing one of their trademark comebacks.

Allan gave his side a glimmer of hope by nipping through a gap for a converted try but Sale were in no mood to surrender their superiority, with Du Preez scoring his second after a well-judged chip ahead from De Klerk.

Impressive from the pre-tournament favourites in the rain! ??https://t.co/B6elQjSBWv