Another red card shown as Exeter edged out by Sale

Exeter hooker Jack Yeandle became the latest player to be sent off in the Gallagher Premiership as the champions succumbed to a 25-20 defeat to Sale at the AJ Bell Stadium.

The Chiefs were 12-8 ahead thanks to tries from Facundo Cordero and Sean Lonsdale when Yeandle was sent off for connecting with the head of Curtis Langdon.

Another red card! This time for Exeter.

Jack Yeandle makes contact high and doesn't get a clean wrap of his arms ?

No room for mitigation, he's out the game ? pic.twitter.com/ovhcICHF2A

They battled well, however, despite Bevan Rodd responding for Sale and levelling matters at the interval.

Sam Simmonds continued his incredible try-scoring form in the second period and gave Exeter the chance of an unlikely victory.

But the pressure was unrelenting from the Sharks in the latter stages and Langdon’s try, allied to the boot of AJ MacGinty, secured the win.

After successive wins to start the Alex Sanderson reign, Sale then lost the next two games as they dropped outside the play-off places.

The new director of rugby experimented with his squad in those defeats to Bath and Harlequins but, against the defending champions, he went in with his best available team.

And they started well, pressurising the visiting defensive line and touching down when Faf De Klerk took a quick tap penalty. Byron McGuigan was in support and the Scotland international did the rest for a 5-0 lead.

Back came the Chiefs, however, with a stunning score from Cordero. Rob Baxter’s men have struggled to find their rhythm over recent weeks, culminating in a shock home defeat to Northampton last week, but this was the type of move the Premiership has become accustomed to. 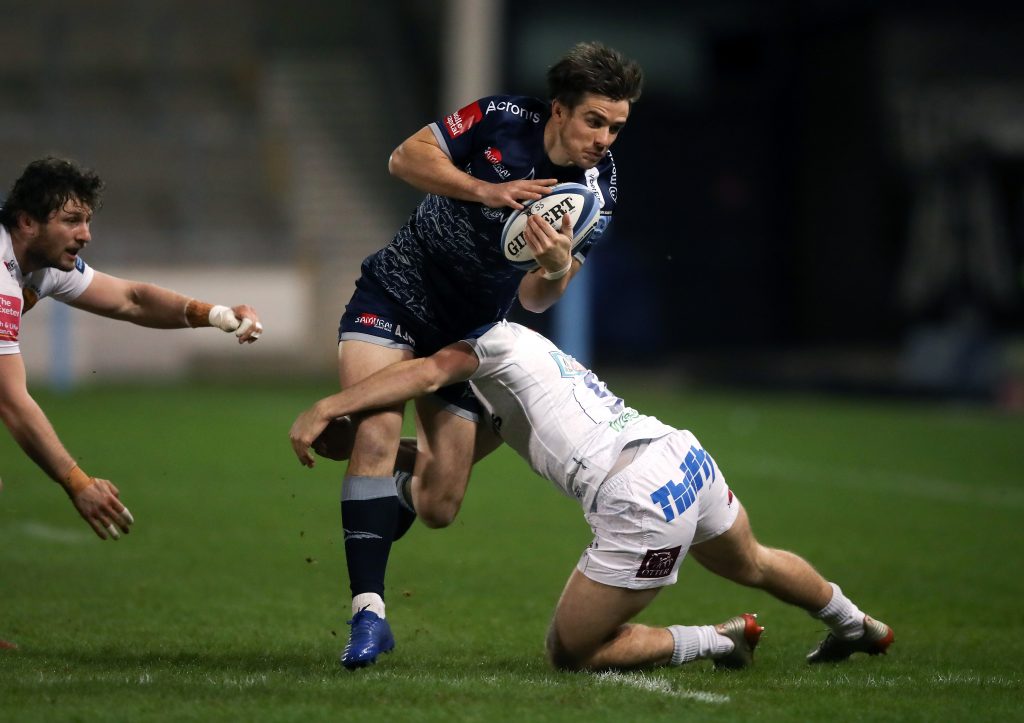 After a lineout had set the platform, a brilliant attack sent the Argentinian into a gap and the wing did the rest superbly, weaving his way across the whitewash.

Joe Simmonds kicked a simple conversion to move them ahead before the hosts regained their advantage through a MacGinty penalty.

Sale were conceding too many needless infringements, though, and Exeter capitalised, setting up a driving maul just outside the five-metre line and scoring via Lonsdale.

Matters got even better for the Chiefs when Sale skipper Jono Ross was sin-binned for taking out Sam Skinner in the air, but that 14-man advantage did not last long as Yeandle was sent off.

Much like the recent spate of red cards, it was for contact with the head of an opponent and the Chiefs would duly feel the pressure caused by the hooker’s dismissal late in the half.

Initially, they responded well, with fly-half Joe Simmonds kicking a three-pointer, but the Sharks’ gargantuan pack soon got to work and levelled the match at the break through Rodd’s close-range effort. 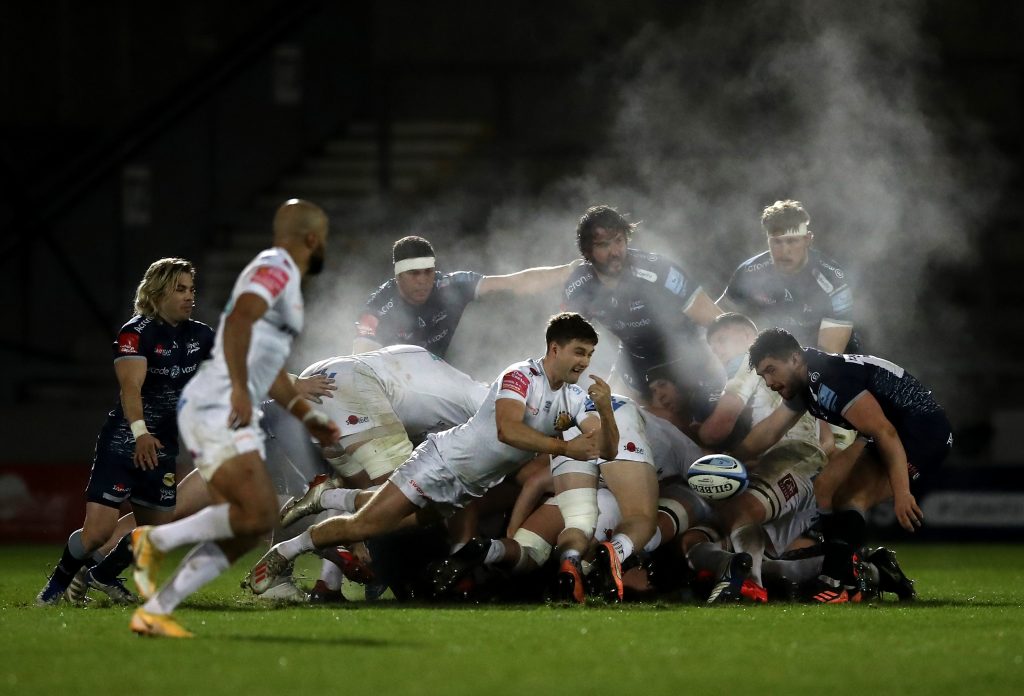 Down a man, the odds were against Exeter, but they began the second period excellently and went over for the third time. Unsurprisingly, it was Sam Simmonds who scored it.

The number eight moved onto 43 Premiership tries after he caught De Klerk unawares at the back of a maul to cross the whitewash. 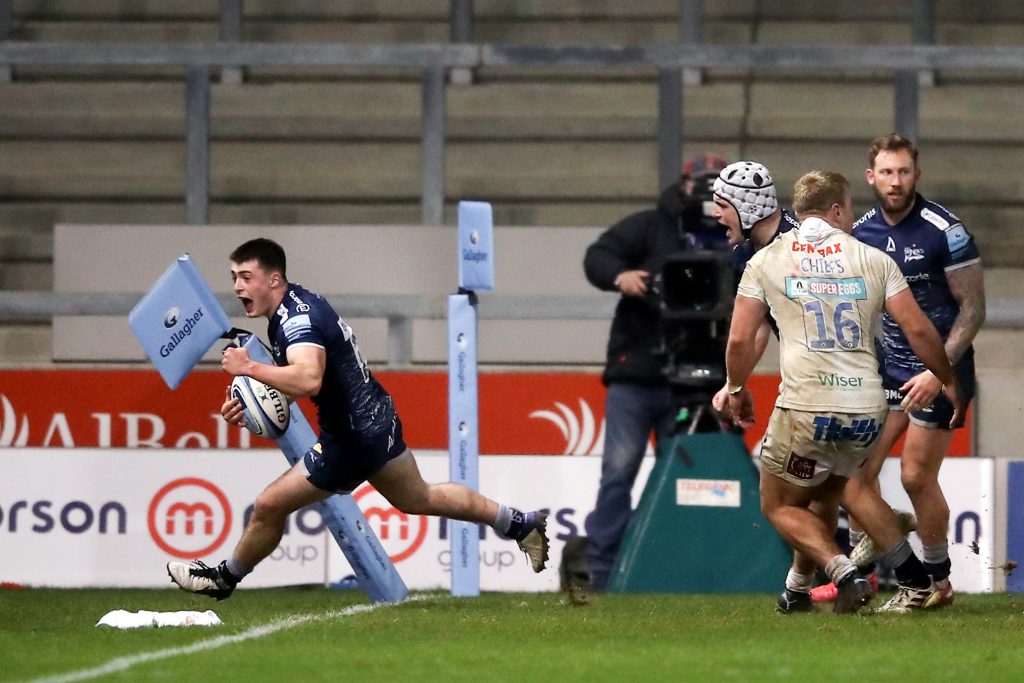 Baxter’s charges were also defending stoutly, but they appeared to be breached when MacGinty went through a gap and touched down. However, it was ruled out for crossing and left the hosts five points in arrears with a quarter of the match remaining.

Sanderson’s men continued to press and their endeavour was rewarded as Langdon scored in a similar fashion to Simmonds by breaking off the maul and going over.

MacGinty crucially added the extras to give Sale the lead and then added a penalty to seal the win, despite late Exeter pressure.