RUGBYPASS+ Why did England's attack struggle in the Calcutta Cup?

By Nick Bishop
Why did England's attack struggle in the Calcutta Cup?
By
Nick Bishop
11 months ago
InternationalEnglandScotland
9:18am, 10 February 2022 4 Comments

When a team dominates as much of the ball and the territory as England did at Murrayfield, but only comes away with one try to show for their efforts, questions inevitably tend to be asked.

The men in white enjoyed the lion’s share of territory – a massive 72 per cent in the first half and 62 per cent overall – and more than 18 minutes in possession, out of a total 33 and half minutes’ ball-in-play time. They had 21 more carries than the home side, built 14 more rucks and forced Scotland to make 29 more tackles.

But the result of England’s avalanche of possession was a mere trickle of line-breaks (three) from their 683 metres gained overall. Gregor’s tartan army had to make 132 tackles in the game, but they made them at a near-impregnable 94 per cent success rate.

So, the question must be asked: was the result at Murrayfield more a case of excellent defence by Scotland, or down to moderate attack by England?

Since December 2019, when ex-Ospreys coach Steve Tandy was appointed as Gregor Townsend’s defensive co-ordinator, England have scored only two tries in three games against the bearers of the saltire. Moreover, they have now won only one of the last five fixtures against the auld enemy. On Saturday afternoon, Scotland retained the Calcutta Cup for the first time since 1984, 38 years ago.

Scotland’s ex-captain John Barclay, now one the most astute pundits on the telly, is in no doubt about the improvement ignited by Townsend when he appointed Steve Tandy as his defensive coach:

“Gregor was an attacking player, an attacking coach so it must have been hard for him to come back from 2019 and the disappointment of that [World Cup] and say ‘You know what? We need to put so much more into the defensive side of the game’. He deserves a huge amount of credit.”

The Scotland head coach himself confirmed the change of emphasis after the match in Edinburgh:

“Being tough to beat is really important, it usually defines championship-winning teams. We have set really good standards over the past couple of seasons and the players now enjoy defending.

“We want to give them a framework to play, and one in which they are encouraged to play. Getting both of those sides of the game right is so important. But defence certainly helps you win those tight games.”

If Scotland under Tandy’s careful stewardship read England’s attacking intentions like a well-thumbed book, they were also assisted by the ease with which England suffered writer’s block, and their structure with ball in hand broke down.

Under Eddie Jones, England have always been one of the most effective sides in the world at creating a short side of the field, and then exploiting the space they have manufactured to the hilt.

Right from the opening whistle in Edinburgh, they seemed unaware of potential opportunities in that area:

Sam Simmonds carries well over the advantage-line on first phase from lineout, but play goes same-way on the next phase, and wing Max Malins is hurled back in the tackle, forcing the kick by Ben Youngs two phases later.

The vista on the near or short side after Simmonds’ initial drive looked a considerably more attractive option: Number 10 Marcus Smith and full-back Freddie Steward are aligned opposite Scottish forwards, and big Nick Isiekwe is being marked by diminutive scrum-half Ali Price, so the chances of progress are much more obvious on this side of the field. At other times, Scotland read the short-side play in advance and shut it down ahead of time:

Two carries from lineout are stopped cold for no gain, and on third phase the picture looks like this: There are four England backs grouped on the near side (Marcus Smith (1), Henry Slade (2), Elliott Daly (3 and Joe Marchant (4)) and seven English players in the area in total. But Scotland already have six defenders in the line to that side, with centre Sam Johnson tracking across-field, and wing Darcy Graham coming up fast from the backfield to join them. No advantage, prompting another kick by Youngs on the following phase.

The contrast when Scotland achieved their first attacking lineout position of the game was glaring:

It is the same kind of opportunity as that presented to England in the first example, but on this occasion the two backs (Stuart Hogg at first receiver and Darcy Graham at second) comfortably outmanoeuvre the two forwards opposite them (England second rows Nick Isiekwe and Maro Itoje) to create a try for replacement scrum-half Ben White on the inside.

England began to look disorganised far too quickly in the phase count from set-piece:

It is another positive carry by Simmonds on first phase, but the structure of the three-man pod of forwards on the following play is already ragged: Instead of presenting in a flat line with the intended ball-carrier (Luke Cowan-Dickie) slightly fore-fronted, the three English forwards are all standing one behind the other. This leads to evident confusion about who should be receiving the ball, while also denying the option of the pull-back ball to Marcus Smith.

The other teething problem to emerge over the course of the first period was Smith’s tendency to stand ahead of his forwards, rather than behind them in phase play:

When Smith first receives the ball, he is standing in front of the pod of three forwards: 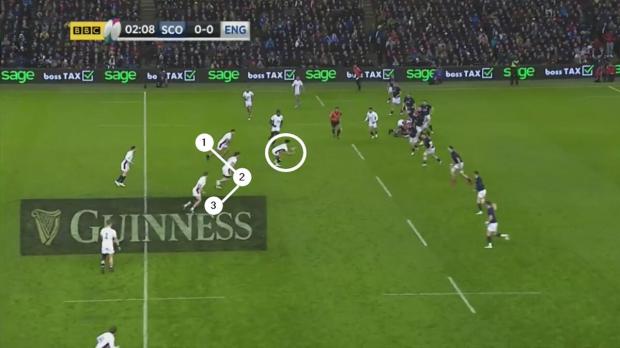 Loosehead Ellis Genge (1), captain Tom Curry (2), and No 8 Sam Simmonds (3) are the three possible carriers. Making an extra pass on a forward carry entails a risk, giving the defence a vital, extra bit of time to adjust and close on the ball-carrier. The outcome is that Smith receives the ball on the next phase five metres further back, and the Scotland D has already eaten the space outside him. Freddie Steward is forced to kick and even that kick is blocked out into touch.

In ‘combination’ (forwards-backs) scenarios, most seasoned Test number 10s will only appear in front of their forwards when they have a very definite plan which needs to be executed on the gain-line, like an attacking grubber kick or inside pass to a wing or fullback. In all other instances, the veteran performers like Quade Cooper and Johnny Sexton lurk behind the forward pod in front of them.

Here are two examples from the Ireland-Wales game played immediately before the Calcutta Cup clash:

From his position behind the forwards, Sexton can connect with the attackers out wide far more directly than Smith, who has to pass to the forward pod first, then await developments on the next phase.

This pattern only produced one relative success in the 11th minute:

Smith passes to Ellis Genge and recycles himself for the next phase moving right, with a nice cut-out pass off the left hand by Elliott Daly creating some room for Max Malins down the side-line. But at the end of the play, Freddie Steward was still hustled into touch for one of those turnovers of possession Gregor Townsend prizes.

At other times these turnovers came more directly:

Smith inserts himself in between Nick Isiekwe and Ben Youngs’ delivery from the base, and the extra pass gives Scotland a better shot at robbing Isiekwe at the ensuing tackle.

Sometimes the domination of territory and possession does not accurately reflect the underlying course of a game, and the encounter between Scotland and England at Murrayfield was definitely one such occasion. England had a lot of the ball, but Scotland looked more comfortable in defence than the red rose appeared with ball in hand. The match suited the new Scotland template which has been developing under Gregor Townsend and Steve Tandy.

There were some clear issues thrown up by the game for Eddie Jones to address. Should Marcus Smith stay on the pitch for the whole game, or just part of it? Should Alex Dombrandt be entering the fray (in the 63rd minute) just as Smith is leaving the field, when the two enjoy such terrific attacking synergy for Harlequins? Where should Smith be standing in relation to his forwards in phase play, to make maximum use of his talents and streamline the attack?

England have some breathing room, with two easier rounds versus Italy and Wales, in which to seek out the answers to those questions, before the whirligig of time brings in its revenges with the final games against Ireland and France in mid-March. ‘Le Crunch’ not once, but twice in two weeks.