By Will Owen
Six Nations: Kyle Sinckler's evolving role with England
By
Will Owen
11 months ago
Six NationsEngland
3:36am, 06 March 2022 Go to comments

Ever since he made his England debut in 2016, there has been a tremendous amount of discussion surrounding ex-Harlequins, now Bristol, prop Kyle Sinckler. For some time, he couldn’t shake off his “hot-headed” reputation of his early years despite his much improved discipline. Now, at 28, he is regarded as one of England’s most important players, having earned 50 international caps at the coalface.

The South London-born tighthead came through the ranks the traditional way; after being a young, in-form club heralded by fans and media alike, he found himself deputising for Dan Cole in the white of England. From the bench, he had done enough to impress the keen eye of Warren Gatland, usurping Cole for the 2017 Lions series, to start in three Tests. Since earning his first start in 2018, Eddie Jones hasn’t looked back; Sinckler has only appeared from the bench four times for England since he first donned the No 3 jersey.

Whatever the fans thoughts on Eddie Jones, they know he has set ideas. When he has a gameplan in mind, he will stick to it. In past, that has meant sticking to extremely strict shapes, whereas now his focus is more around creating unstructured scenarios. Whether they’re a fly-half or a prop, if you’re confident enough that a player should start every game, you’re going to find a role that best suits them individually.

With this in mind, let’s have a look at the individual roles Sinckler is given, regardless of the structure England are playing. The following example is from England’s last encounter with France, in the 2021 Six Nations. This particular passage occurs in the 35th minute:

From a 22 drop out, France kicked long and Damian Penaud gets a great shot on Jonny May, driving him back 10 metres. Usually, an edge breakdown is the easiest place from which to set a 1-3-3-1 shape, but on the back foot it is much more difficult.

And so, it’s Sinckler’s time to shine. He breaks his role as a potential carrier off 10, instead running an unders line onto the ball. This is an easy pass for Ben Youngs to make, so the margin for error is low. Instead of playing to the 1-3-3-1 structure, Sinckler’s objective here is to give England the illusion of moving forward, gaining momentum. With Luke Cowan-Dickie and Mark Wilson (left of above image) already in use, Sinckler stays on his feet long enough that Tom Curry can arrive and win a one-man ruck. The ruck-speed here is rapid too, with Ben Youngs arriving within two seconds to clear the ball. This gives George Ford the time and space to put a great kick in the air to get England back into the French half.

It doesn’t look like much, but this is a role Sinckler often undertakes for England. When his team is on the back foot, he individually breaks structure and gets his team moving forward once more. The same principle applies for line breaks, making his opposition backpedal further.

Let’s look at an example of Sinckler doing this on the front foot, from the very same game.

This is from the final play of the first half, and England are playing from a line-out maul. On first phase, Tom Curry is met well on the advantage line by Gregory Alldritt.

In order to help Curry move forward, Cowan-Dickie and Itoje have to join the midfield ruck, meaning England have already broken their intended shape by the second phase. Both players had just come from the previous maul, so England are very much compromised.

Which forward is England’s go-to in unstructured scenarios? Why, it’s Kyle Sinckler! The Bears prop runs a near-identical line to the previous example. The idea is for him to dissect the gap between Charles Ollivon and Julien Marchand, and provide enough momentum to prevent any defenders from the left-hand side of the ruck (top-right of the above image) from folding.

Unfortunately, Sinckler loses the ball in contact on this occasion, leading to half-time. That said, his line is really smart. The above image shows where Sinckler lands post-contact – if he presents the ball well, England are presented with a 5v3 overlap on the right, with half the width of the field to play with. This includes Anthony Watson, who is off screen, plus Henry Slade could quickly join the attack as a sixth man.

A very simple line by Sinckler opened up an opportunity for England to make a lot of ground, simply because of the time he chose to run it. These old-school lines ran in a modern structure are no coincidence, but instead Sinckler’s designated attacking role.

Not to mention, when England do have structure, he works just as well – look no further than his try against Australia from the 2019 World Cup to illustrate that. Only the smartest props identify space in the backline that well, let alone finish tries from that position.

It’s worth giving some praise to Sinckler’s defensive work. At 122kg, he is naturally a man nobody wants to run into, but his astute nature is what sets him apart from the many wrecking balls of world rugby. The following example is from the 22nd minute of last week’s win over Wales at Twickenham: 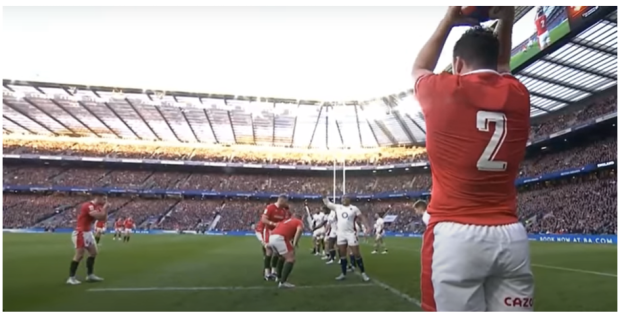 At this stage, Wales have been camped in the England 22 for over five minutes. Sinckler is at the front of the line-out with his arm up, ready to steal the ball. He shouts at Ryan Elias to “get it in!”, putting pressure on the hooker.

He rapidly turns and notices Ross Moriarty moving to the front of the line. Knowing Wales are trying something tricky, Sinckler’s position remains neutral. He is equally ready to stop a breakaway or bend down and push. The arm, however, stays up, just in front of Moriarty’s. Moriarty isn’t lifted, so Sinckler knows his hand merely has to obstruct the Welshman’s in order to give him a good chance to steal the ball. In the above image, the ball is circled – this screenshot is from the exact split-second Sinckler looks back up at the ball. He steals it, and England clear. The prop’s reaction times are similar to those of a Bop-It world champion. World-class by Sinckler.

If Eddie Jones had his pick of any tighthead in the world, he would have Kyle Sinckler. A simultaneously calm and aggressive presence who will mould himself to any gameplan – or, indeed, lack of gameplan. Tadhg Furlong is rightly lauded as the best prop in the world right now, but Sinckler is the most fitting for Jones’ vision of where the game is headed.

England have a prop who will take them forward whether it’s in attack or defence, open or structured play, scrum or lineout; I could go on. Thankfully, Bristol’s shining light has finally gotten shaken off the “hot-headed” clichés. He is no ticking time bomb. He is the best “system” prop England could ask for.