It was all so very different, only twelve short months ago. The rugby romantics were elated by the glut of lightning-quick ball being produced from the rucks. The flowering of prodigious talents like Marcus Smith accompanied it like a swathe of bluebells in springtime. The going was getting tough for defences everywhere around the world.

Now the hard noses which were put out of joint one year ago have been reset, and the tough, in the immortal words of Billy Ocean, have most definitely found their mojo and got going again.

Leading the way up north are Saracens, who have rebounded from the humiliation of being publicly dragged through the rugby courts after exceeding league salary cap restrictions, to reach the final of this year’s English Premiership. There they will play their doppelgangers from Welford Road, the Leicester Tigers, coached by one of Saracens’ own, Steve Borthwick.

It will be a grinding battle of attrition, and it will be a very far cry from the same stage of the tournament in 2020-21. The two semi-finals last season – between Harlequins and Bristol (43-36 to Quins after extra time) and Exeter and Sale (won 40 points to 30 by the Chiefs) produced a grand total of 20 tries and 149 points between them.

One year on, and it is the two best defensive sides rather than the two premier attacking outfits who have progressed to the last match of the season. Semi-final production dropped from 20 tries in 2021 to 11 in 2022, from 149 points to 92. It is fair to say we will not see anything like the 11-try, 78-point extravaganza served up by Exeter and Quins next Saturday.

Tries will be given up with a niggardly hand, if they are given up at all by the two best defences in the league. Of even more interest is the mirror imaging in the Southern Hemisphere, where the two teams who have given up the fewest tries and possess the highest tackle completion rate – the Blues and the Crusaders – have reached the final of Super Rugby Pacific, to be played out on the same day as events at Twickenham.

The Crusaders’ comfortable 20 points to 7 victory over the Chiefs exemplified the new spirit of domination without the ball. The Chiefs enjoyed 62 per cent of ball possession and forced their opponents to make an astronomical 222 tackles in the game. They made more than twice as many passes and runs as their opponents, and they had already set 78 rucks in the red-and-black 22-metre zone by the hour mark.

Despite all that, they lost the match convincingly. Ex-man of Canterbury, and now Blues head coach Leon MacDonald was full of admiration afterwards:

“Yeah, 222 [tackles] … I’ve watched it a couple of times. This is their bread and butter, finals rugby. They love it. This is our second final in two years and we’re at home again and excited too. There’s everything to play for. You couldn’t script it any better.”

Exactly the same words could be used to describe Saracens in England. If you gave them a choice, they would probably prefer to play rugby without the ball, rather than with it. It is their bread and butter – finals rugby.

Owen Farrell on the Saracens

Teams look for occasions where they can show their tightness as a group, and their sense of alignment as a club or organisation. Defence on the field is a very immediate expression of that sense of shared purpose.

England captain Owen Farrell was making the following comments about the impact of the salary cap punishment on the club, with many of its players spread around the other Premiership outfits on loan agreements while Saracens spent a year doing ‘community service’ in the second tier of English rugby. They are equally apt when applied to the club’s attitude to defence, especially when they have one man less on the field:

“Probably the best thing I can say is that we as players probably just always thought that would happen.

“I don’t think anybody thought for two seconds that we’d all end up all over the place.

“The biggest shock was a few younger lads going on loan as they tried to break into the international team, which was good for them and good for the club. We never expected anyone to want to go anywhere else.

Both of the semi-finals were won in the periods when both Crusaders and Saracens had lost men to the sin-bin. The red-and-black lost Pablo Matera to a yellow card between the 21st and 31st minutes of the first half, and shortly afterwards to a red from the 32nd to the 52nd minute. But they emerged from that half-hour well in the black, having scored 14 points while conceding only seven themselves.

The black-and-red, on the other hand, lost Elliott Daly to a yellow card from the 57th to the 67th minute, Billy Vunipola between the 63rd and 73rd, and Alex Lozowski from the 74th minute to the end of the match. They were down to 14 men for all of the final quarter, and even down to 13 for a short four-minute period, but they came out smelling of roses with a seven-points-to-five advantage in that crucial portion of the match.

The key to defence against ‘power plays’ when you are down on numbers is the ability to keep width and prevent easy overlaps. The Crusaders offered some highly instructive clues to a successful defence from scrums:

The Crusaders have brought their left wing, Leicester Fainga’anuku, in on to the openside flank of the scrum, so there must be space out to their left edge, right? Wrong. The short-side flanker (Tom Christie) gets off the side of scrum early enough to mark the first attacker (Chiefs’ halfback Brad Weber), but not so quickly that he attracts a penalty for breaking his bind.

Number 13 Jack Goodhue times his covering run to the side-line perfectly, ensuring he has enough time to reach the last attacker while keeping the space filled underneath him: 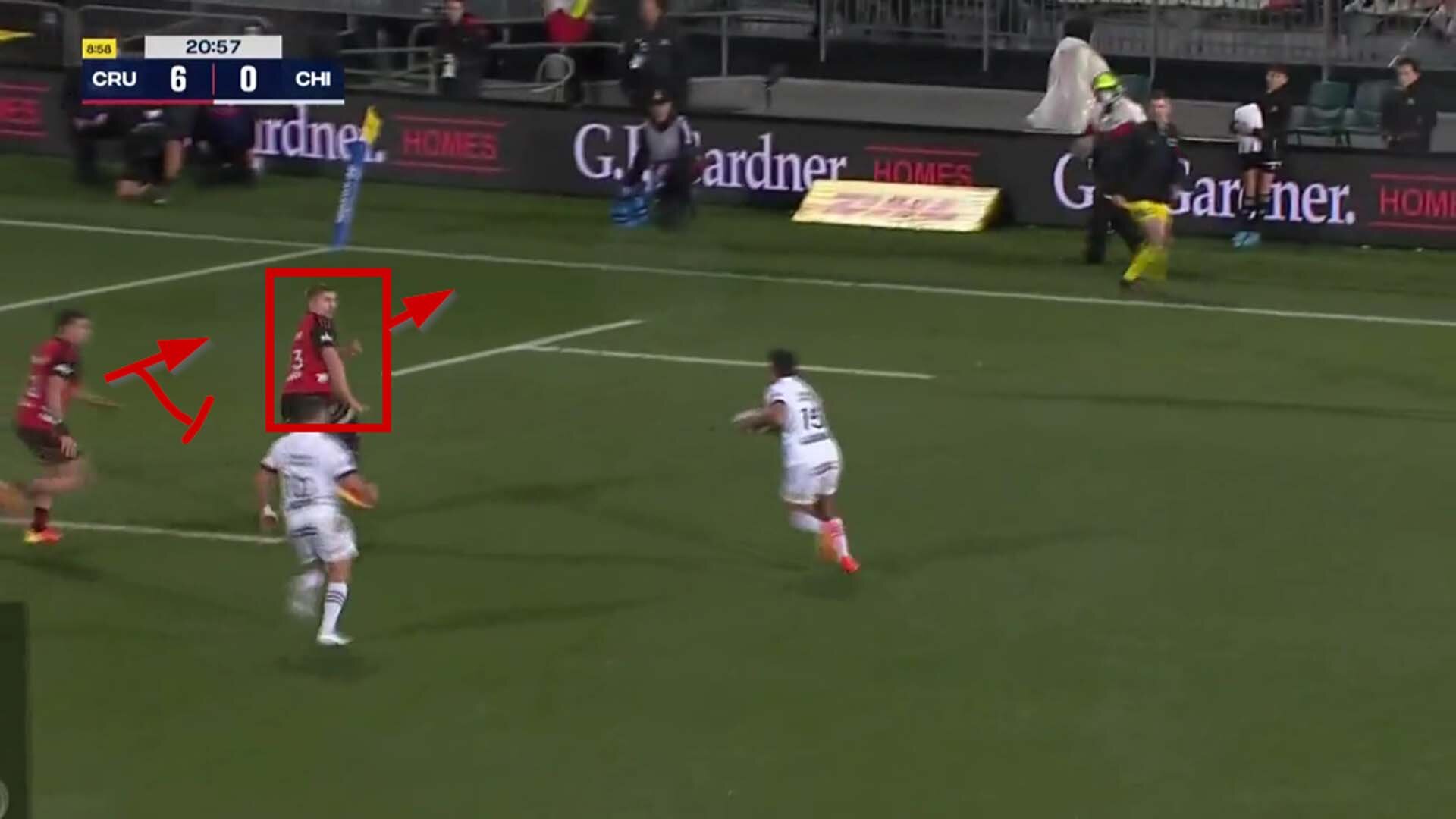 On second phase, the Crusaders are already winning the sequence with a dominant tackle on Brodie Retallick as play bounces in off the touch-line. When play shifted back towards the opposite side, the men from Canterbury had all the bases covered, forcing a fumble and sending play tumbling down to the opposite end of the paddock:

The kick-through by Sevu Reece was eventually forced in-goal, and the Crusaders scored from the resultant five-metre scrum.

That is finals football for you – the Crusaders’ bread and butter. Even better, they spoiled Chiefs’ prime scrum possession at source, with Fainga’anuku again pinned to the side of the set-piece and Bryn Hall getting a hand in on the pick up by Pita Gus Sowakula at the base:

The true measure of excellence in wide defence occurs when the opponent makes metres up the middle at first. There is a natural tendency for the D to condense around the ball when yards are conceded ‘up the gut’:

First Samisoni Taukei’aho, then Quinn Tupaea break tackles straight up the middle of the field, but Fainga’anuku makes the correct decision to insert himself in between the last two attackers on the edge and make the intercept.

The Crusaders maintained their width admirably one man down in red zone defence: 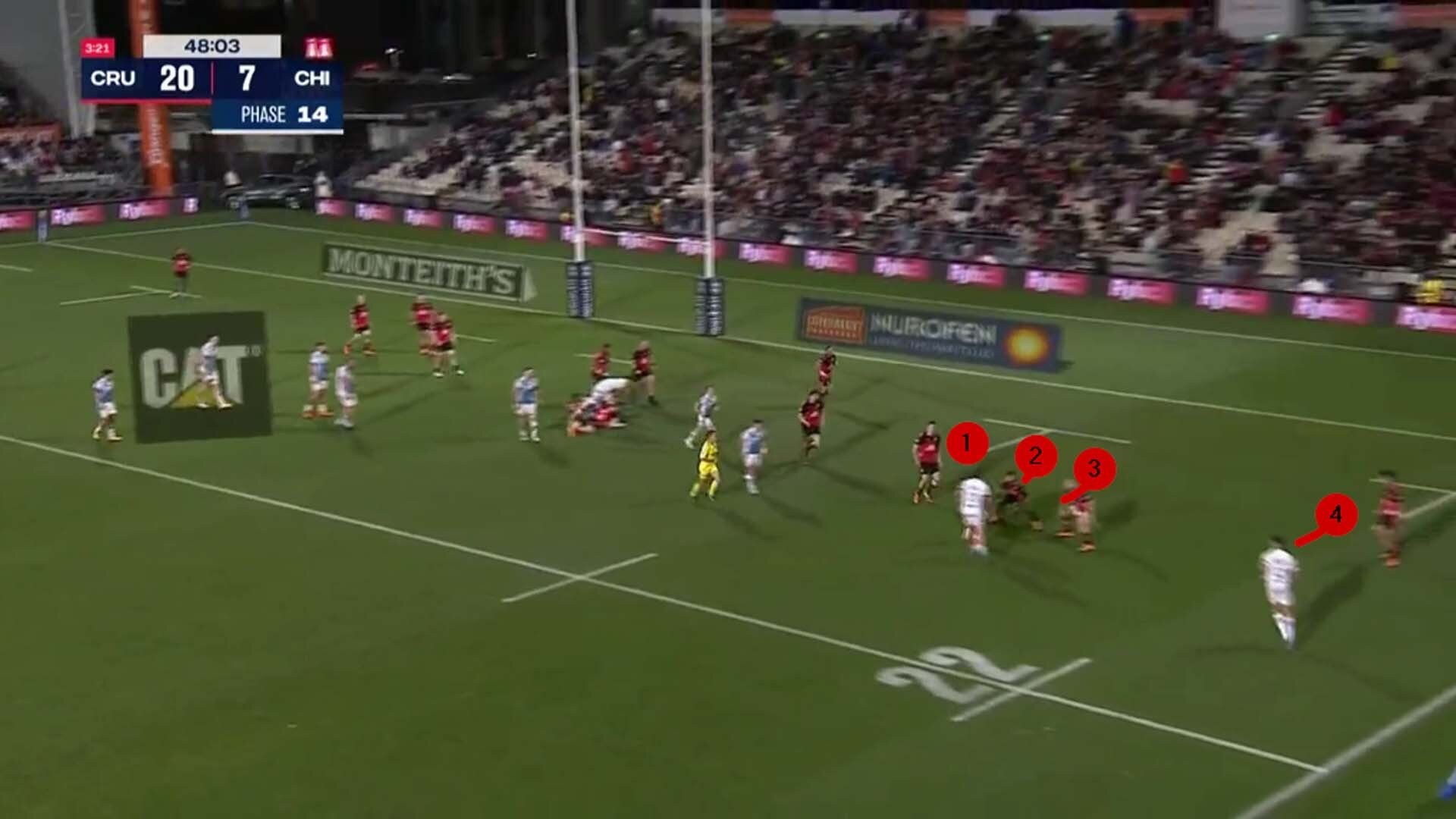 The Crusaders not only have the width of the attack covered, they are even preparing to make a double tackle on the penultimate Chief.

Saracens showed a very similar same ability to absorb short tackle busts up the middle while keeping their shape out wide:

Stephen Lewies makes some hard yards close to the ruck for Quins, but there is no space when the ball is shifted towards the right edge:

The alertness and decision-making of wing Sean Maitland (here the penultimate defender) was obvious, closing down the play before it can ever reach the side-line and then contesting the tackle ball for good measure: 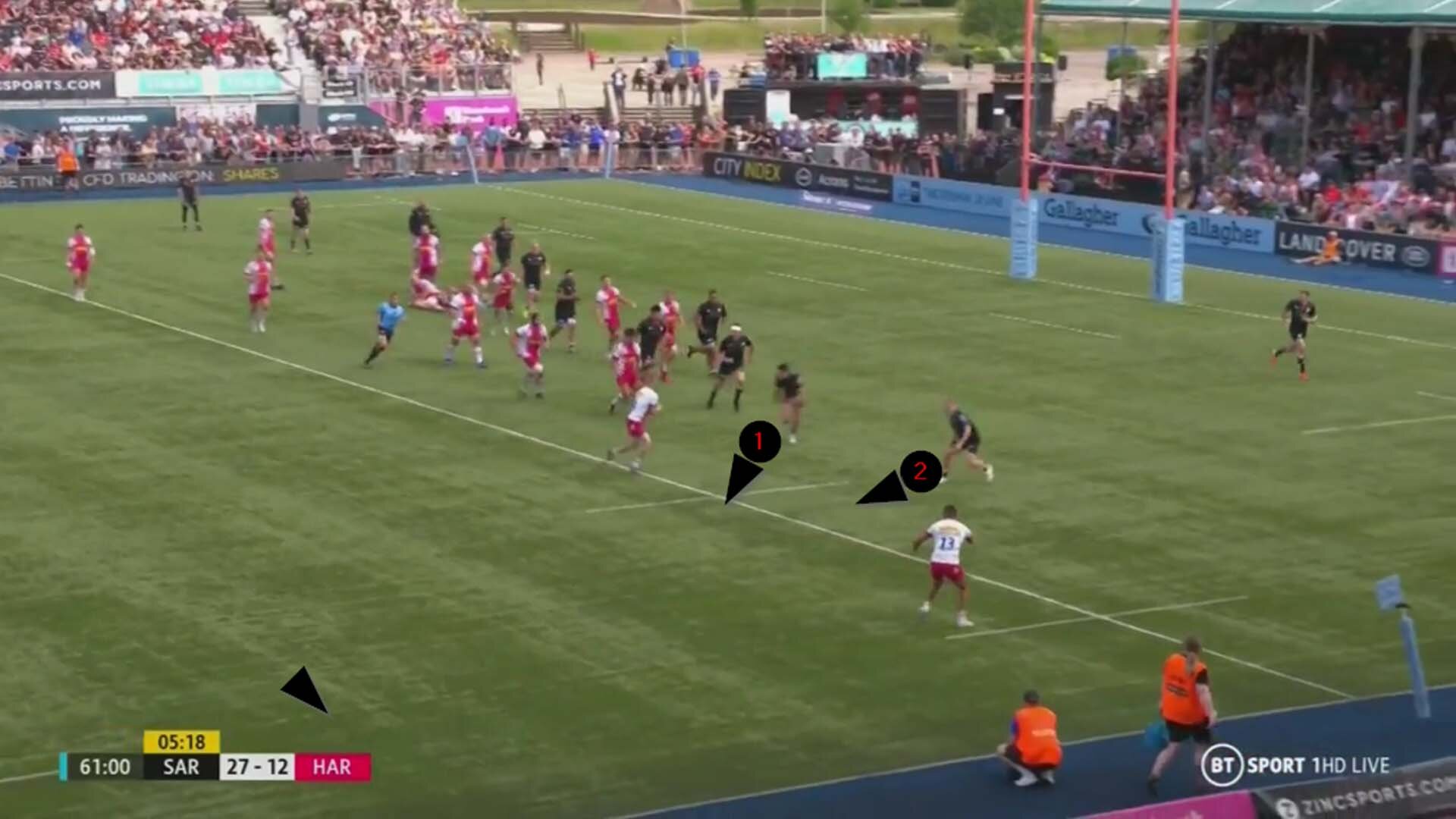 The ball will never get to Joe Marchant on the right wing because Maitland has used the time spent with the pass in the air so efficiently.

Pushing back hard at the wide rucks was a consistent theme in the black-and-red’s undermanned defence: 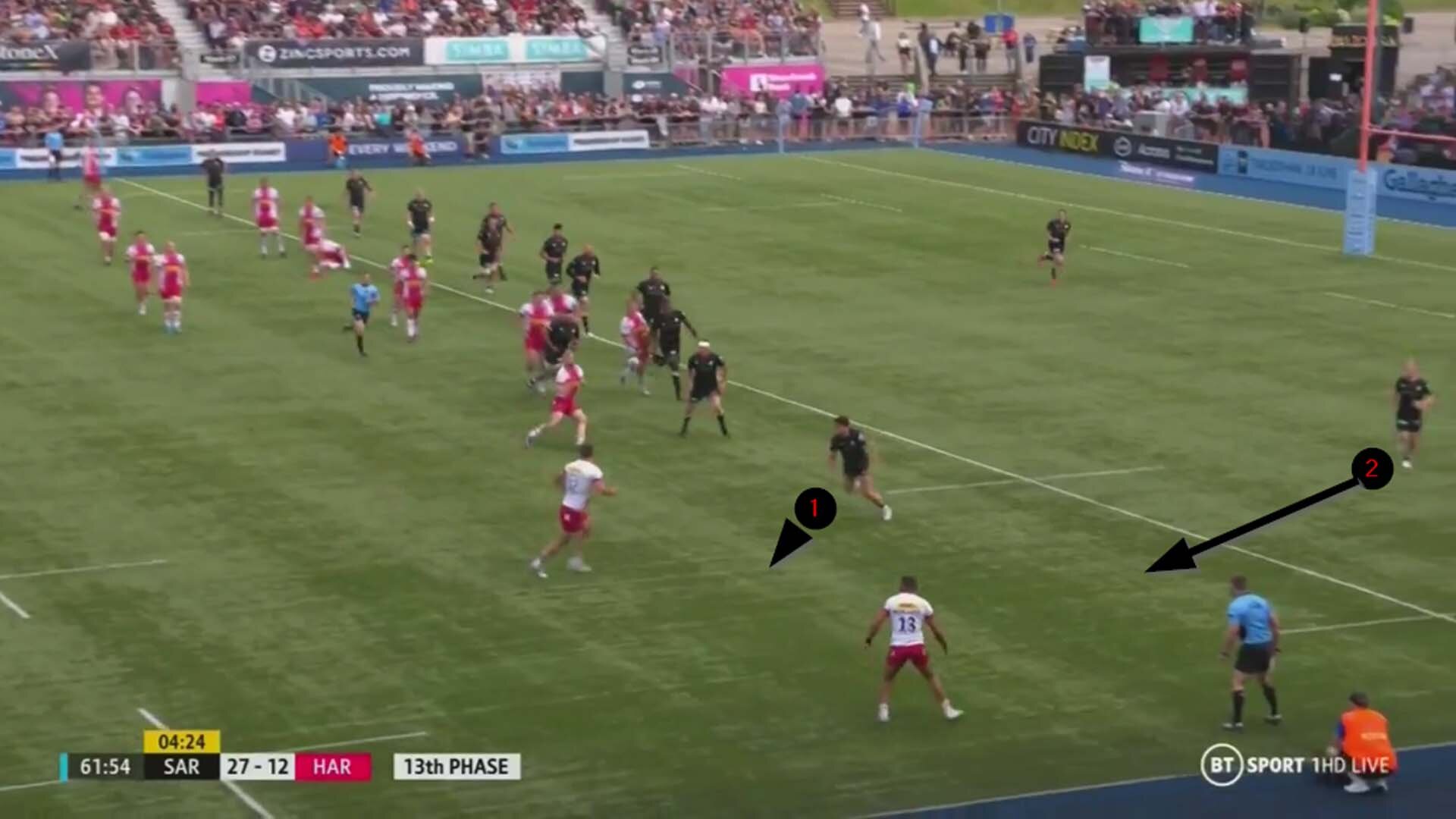 In the second example, Maitland again breaks hard on the inside man (Quins centre Andre Esterhuizen) and that creates an easier tackle for the defender outside him (scrum-half Aled Davies) and a harder ruck for Quins on the right 5m line.

Red on black, or black on red, it doesn’t matter. Finals football has become something of a speciality for clubs like Saracens in England and the Crusaders in New Zealand. At the same time, the momentum which had appeared to be swinging so conclusively towards the attacking side of the ball in the 2021 knockout stages of the English Premiership has been reversed, with both of the attack-based teams (Northampton and Harlequins) eliminated in the semi-finals and the two defensive threshing machines (Leicester and Saracens) advancing to the final game.

Likewise, the Super Rugby Pacific final between the Crusaders and the Blues will be another arm-wrestle with most of the same themes. Will England’s July visit to Australia, and New Zealand’s attitude against touring Ireland reflect the same movement at international level? It is an intriguing question, and we will know the answer sooner rather than later.