By Nick Bishop
How Shaun Edwards' France have gained the upper hand on defence
By
Nick Bishop
11 months ago
InternationalFranceIreland
6:21am, 23 February 2022 Go to comments

Only one short week ago, ex-Scotland second row Jim Hamilton published the following excerpt from a Shaun Edwards video analysis session with his French charges. It quickly went viral on Twitter:

Hamilton applauded: “Shaun Edwards going full French. Love it.” Maybe ‘full French’ would be an exaggeration, but the sheer force of Edwards’ personality pours through the eclectic mix of English and French lingua-franca, dominating the conversation.

A rough translation of the France defence coach’s words?

“Because, for one metre of difference, one metre, the consequence? Defend the maul, defend the pick and go – perhaps a yellow card, perhaps a penalty here.”

If anything has gone viral, it is Shaun Edwards’ influence on the fortunes of the French national team. That influence works so well because it builds from the base up, as his words to the players illustrate.

By concentrating pressure around the base of ruck or maul, Shaun Edwards knows he can pressure the scrum-half who has to clear the ball by hand or boot, and that pressure will ripple outwards onto the men outside him. One metre at the start makes all of the difference at the end.

France’s big wins over the last few months – against New Zealand’s All Blacks back in November, and against Six Nations rivals Ireland a fortnight ago – have been based squarely on France’s ability to dominate that crucial area around the fringes of the ruck and pile pressure on the opposing number 9.

Aaron Smith is the best passer of the ball from the base of a ruck in the global game. The length and variety of his distribution creates opportunities for the attack which others can only dream about. So, one of the planks of the French defence designed by Shaun Edwards against the All Blacks was to heap pressure on the diminutive halfback.

French flanker François Cros drives off the first New Zealand cleanout support (Sam Cane) after a break by the men in black, number 10 Romain Ntamack immediately joins the counter-ruck, and Greg Alldritt finishes the job by smashing Smith as soon as the ball emerges from the ruck. One metre gained at the tackle suddenly becomes ten behind the advantage line. Avantage, Les Bleus.

It changed the balance of the All Blacks attacking game. In the first half, there were 33 passes from the base by ‘Nuggy’ and only one pick and go by the forwards. In the second period, there were nine passes by Smith and 13 pick plays by the forwards before substitute Brad Weber replaced the little maestro for the final quarter of the match:

In that final example, New Zealand would have been penalised under the current refereeing protocols for both failing to bind with a full shoulder (Samisoni Taukeiaho on Cane), and for Smith’s use of the hand to roll the ball back through the ruck. But the intent behind the charge around the edge of the ruck by France hooker Peato Mauvaka is pure Shaun Edwards. Think of the consequences – one metre, just one more metre.

The last sequence also hints at Edwards’ hard defensive focus on the box-kick as an enemy method of exiting from the 22. He explained it recently, in conversation with World Cup-winning England coach Clive Woodward:

“But the box kick? When it first caught on, as a defensive coach I was licking my lips. If the opposition scrum-half is only allowed five seconds – as the law was intended – you can cause chaos by good, aggressive, legal counter-rucking and pressurising the nine.

“With Wales we had quite a bit of success at the 2015 World Cup with those tactics.

“But over time refs started getting very lenient and protecting the scrum-half. Five seconds? I’ve counted up to 13 before the scrum-half finally hoists the kick and then the attack coaches have come up with these caterpillars to protect the scrum-half even more. If the situation was refereed as originally intended, there would be much less box kicking.”

All of Shaun Edwards’ box-kicking dreams came true in the recent Six Nations game against Ireland. With both the right foot of Johnny Sexton and the left boot of wing James Lowe missing from the Irish kicking game, Edwards clearly decided to pile the pressure on the last man standing, Jamison Gibson-Park at number 9.

It began from the opening kick-off at the Stade de France:

France counter-ruck vigorously from the outset as Ireland try to set up a caterpillar of bodies on the right side of the ruck, and Gibson-Park is momentarily pulled into a melee he would prefer not to be a part of. The outcome is a short exit which crosses the side-line just outside the 22, and notice given to the scrum-half that there is a target painted on his back for the rest of the game.

A sense of claustrophobia followed the Ireland halfback around every time he went to kick the ball:

Again, the kick achieves far more height than length off the back foot, and the chaser, left wing Mack Hansen, duly knocks the ball on.

As this example suggests, the domino effect for a halfback who is feeling the pressure as the only realistic kicking option is the problems it creates in the timing of the chase:

Scrum-halves will often take an extra step back and away from the ruck if they suspect they are being targeted, and on this occasion, the extra step takes him behind the main chaser (right wing Andrew Conway) at the point of impact: 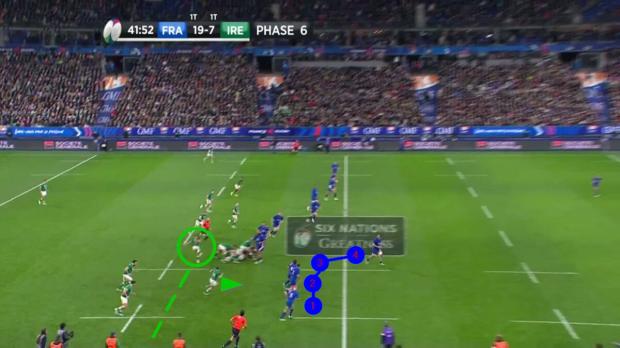 The ball only lands 10 or so metres ahead of the kick, there are four French defenders already forming a protective semi-circle around the catcher, and Conway is already ahead of the kick when it is made. Pénalisation, pour les Bleus.

France also anticipated the zone from which the box-kick would be made and poured bodies and effort into that area. They were rewarded with the final, game-deciding try of the match:

The ball flies over the back of the defensive lineout to Ireland ball-carrier Caelan Doris, and after he is chopped down unceremoniously in the tackle, France flood the zone just inside the right 15-metre line, which will provide the launchpad for Jamison Gibson-Park’s box-kick exit: Huge replacement second row Romain Taofifenua splinters the Irish ruck before it can consolidate and flushes the Irish halfback out of his preparation for the kick. France win the turnover, and prop Cyrille Baille scores on the very next play. A game-winning try? Better than even a penalty gained, or a yellow card drawn on the opponent.

Many words are spoken wistfully about French attacking flair, ‘tries from the end of the earth’, and the mercurial Jekyll-and-Hyde character of the France rugby team. The truth is that those words, and the hackneyed perceptions behind them, are beginning to have less and less meaning as Shaun Edwards’ teaching takes root, and the French defence becomes ever more reliable. Les Bleus are taking all of those crucial centimetres around the ruck, until they translate into metres, and metres become turnovers or even tries. There is a welcome sense of solidity, of a house built on stone, not sand. Whatever language Shaun Edwards is speaking to his players, they understand the intent behind the noise.