One of the abiding memories of last weekend’s end-of-year tour encounter between Wales and South Africa was the sight of rival flankers Siya Kolisi and Ellis Jenkins walking off the field together, talking with warmth and animation for many a minute, arm in arm all the way.

It was Jenkins’ long-awaited return to the international game after an absence of 1,079 days. He last played a test match for his country back in 2018, against the same opponent as on Saturday, South Africa. Right at the end of a man-of-the-match-winning performance, he was caught in an awkward position at a ruck and the major ligaments in his right knee were torn to shreds. It was a very painful watch.

The Springbok World Cup-winning captain paid a heartfelt tribute to his opposite number after Saturday’s game:

“I thought he was great. I remember when he was injured, we were with the Baa-Baas [Barbarians] and I sent my jersey to him.

“Those things are tough, we are all here playing rugby trying to do our families proud and our countries proud and you never want anyone to get injured.

“For him to come back, to fight back from an injury like that, just shows the kind of character he is. I said to him, I’m so proud of him. He played well today. I am looking forward to what he is going to do going forward.”

Ellis Jenkins is an important player for Wales moving towards the 2023 World Cup in France. Not only is he an excellent number 7 with the skills needed to range across the entire back-row, he is also a natural leader. He was a captain of Wales at age-group level, most notably at the 2016 Under 20 World Cup.

At senior level, he has been fast-tracked into the leadership group by head coach Wayne Pivac: “He’s an important player. With Alun Wyn [Jones] injured, you need others to lead in the forwards.”

When Jonathan Davies retired from the fray against the Springboks on the hour mark, it was Jenkins who assumed the captain’s armband on his first game back for his country after an absence of three years.

Wales has been quietly churning out a succession of top-drawer number 7s in the period since Sam Warburton’s shock retirement in July 2018, at the age of 29. Warburton’s absence was already more than adequately covered by the Ospreys’ Justin Tipuric, who had been a British & Irish Lion in 2017 despite having to play second fiddle to Warburton for most of his international career.

Newcomer Taine Basham was the best Welsh forward against the All Blacks one week before, and there are others … who are probably good enough to play test rugby but have missed out because of the sheer quality above them.

The latest generation of natural opensides is so good that Wales regularly achieve their best results with two, and sometimes even three of them on the field together. Had they been fit for selection, Tipuric and Josh Navidi would have been the first choices for the autumn campaign. Pivac again, this time on Navidi, said “He was so good against the All Blacks back in 2017 that Steve Hansen was going around asking everyone who he was, he was that impressed with him.”

Newcomer Taine Basham was the best Welsh forward against the All Blacks one week before, and there are others, like Thomas Young of Wasps, James ‘Cubby’ Davies of the Scarlets and Ollie Griffiths of the Dragons who are probably good enough to play test rugby but have missed out because of the sheer quality above them.

For Ellis Jenkins, there were many echoes of the last game he played for Wales versus the Springboks in the dying embers of 2018. He had been outstanding in that match before the injury curse struck at the very end:

That was a try assist to big tight-head prop Tomas Francis – the ball carried in two hands like a good centre, splitting the thoughts of the defenders between run and pass, with a deft offload to finish the break.

If Ellis Jenkins has a speciality, it is defence in his own red zone, in the area between the goal-line and the 22. At the very end of the first half in 2018, he got a hand under the ball to prevent a certain try: 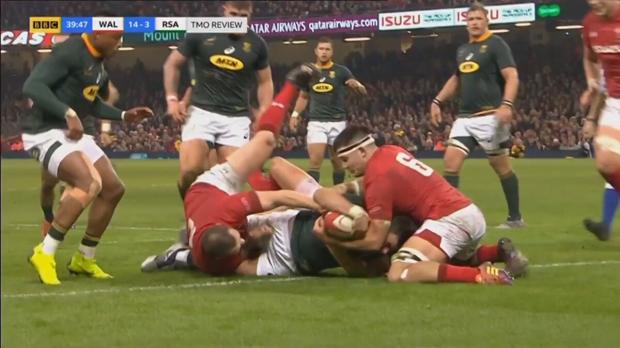 Then he chopped down South Africa’s biggest ball-carrier, Pieter-Steph du Toit, with some help from Tipuric (in the blue scrum cap):

The defensive shut-out was completed with a turnover at the breakdown:

Just like Navidi and Tipuric, who combine orthodox number 7 skills with features often associated with one of the other two back-row positions, Jenkins can alter his tackle height and technique without losing effectiveness. Where he ‘chopped’ a big forward like Du Toit, he looked for the hold-up turnover against a small back, Cheslin Kolbe:

Wind the picture forward another three years, and the scenery close to the Welsh goal-line was very familiar:

One of Ellis Jenkins’ most subtle but valuable skills lies in his decision-making in and around the tackle area. Economy of effort, and not committing to losing causes is crucial to the success of a high-level number 7 in this aspect of the game.

So, Jenkins takes look at the first ruck in the sequence, but passes as soon as the second man commits to clean out. That means it is more likely that there will be a support player missing at the next ruck, and as soon Jenkins sees only one Springbok above the ball, he attacks and wins the turnover penalty.

In the second instance, he is able to wrap all the way around the ruck to take the role of the third defender on the opposite side, and that means he can develop line-speed on the next Springbok phase, and play the gaps rather than the receiver. The outcome is an interception and breakaway down the left side-line for Wales.

The defensive climax arrived in the 48th minute of the game, with South Africa deep within the Wales 22 and pressing for a score:

Ellis Jenkins makes the first tackle on Springbok number 8 Duane Vermeulen, and after one more phase he is already back on his feet and running around to fill the third defender role to protect the open-side of the field: After two more phases to that side, the South African attack has been exhausted while the Welsh defence still maintains its width: This means that Wales are dictating the flow of the attack, not South Africa. When the ball came back towards Jenkins’ side again 20 seconds later, he was primed and ready to rob big Springbok centre Damian de Allende of the ball:

Once again, the type of tackle is tailored to the ball-carrier. De Allende likes to carry high in order to get his powerful leg drive into play and make yardage after first contact with the defender. That gives Ellis Jenkins time to wrap his arms under the ball and prise it free as the drive comes on.

Here is the same sequence from the reverse angle:

Jenkins clearly makes contact underneath the shoulder so that he can target the ball while it is still above ground.

Wales restored pride of performance in a darned close-run thing against the world champions in Cardiff. The key to Welsh success in the 2019 and 2021 Six Nations tournaments, and their two home victories over England in both seasons, has been the quality of their back-row.  Wales is currently producing more top-drawer number 7’s than any other top-tier rugby nation bar New Zealand, and two of them will almost certainly start in the 2022 Six Nations.

Pick any two out of Justin Tipuric, Josh Navidi, Ellis Jenkins and Taine Basham, and go to war. Ellis Jenkins may win the nod as one of the pair, and he may rise quickly through the ranks from private to general in the absence of the totemic Alun Wyn Jones. That would provide an uplifting end to the story of his comeback from injury, and one which Siya Kolisi will be quietly applauding from the other side of the world.