On happier note for Sharks fans, World Cup winner Faf De Klerk made a triumphant return to club rugby as Sale fought their way to a scrappy 25-15 win over their French opposition.

Former England winger Chris Ashton scored a competition record-extending 40th try but the Premiership club made hard work of securing their first win of this year’s tournament against undisciplined opponents who had one man sent off and two others sin-binned.

The returns of De Klerk and Curry, who was named man of the match, were among nine changes to the team that took a bonus point from a 13-7 defeat at Glasgow and there was a lack of cohesion at times. 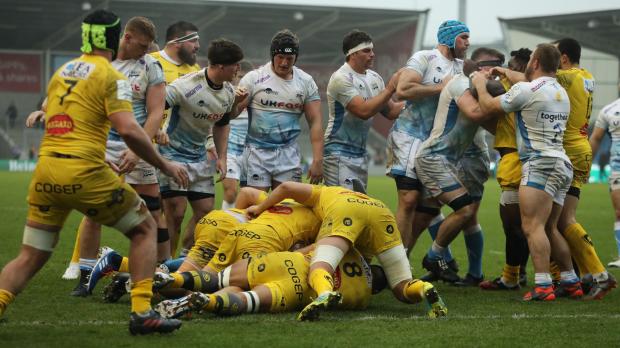 The result effectively puts La Rochelle out of contention following a 31-12 home defeat by Exeter but sets up the Sharks for their home tie against the unbeaten Chiefs in a fortnight’s time.

It took De Klerk just seven minutes to make his mark, taking play to within a foot of the La Rochelle try line with a sniping run which created the position for AJ MacGinty to get centre Rohan Janse Van Rensburg over for the opening try.

MacGinty, who had mixed fortunes with the boot, added the conversion to make it 7-0 but missed a penalty in the 14th minute and midway through the first half the visitors drew level with a try out of the blue from winger Vincent Rattez, converted by veteran fly-half Brock James.

James then twice turned down penalties in kickable positions but the Sharks defence held firm and they looked to have scored a wonderful try in the 26th minute after counter-attacking in spectacular fashion.

Right winger Denny Solomona raced into space and MacGinty combined with De Klerk to get Ashton over.

Ashton celebrated with a trademark swallow dive and MacGinty added the simple conversion but referee Andrew Brace was then prompted by television match official Brian MacNeice to check for a forward pass and he subsequently disallowed the try.

Brace twice more took to television replays before half-time to check on foul play and the results were red and yellow cards which forced the French side to play out the half with 13 men.

Leroux was sin-binned for tackling Solomona off the ball and Bourgarit was sent off after appearing to make contact with Tom Curry’s face.

MacGinty kicked a second penalty but, despite being camped on the La Rochelle line, Sale were unable to add any further points, with MacGinty coming up short with a long-range kick on the stroke of half-time.

James brought his side level at 10-10 with a penalty early in the second half but Sale were back in front thanks to a penalty try in the 45th minute when La Rochelle front rower Priso was sin-binned for collapsing a driving maul.

MacGinty’s third goal made it 17-10 but Sale struggled to put their gritty opponents away.

James was off target with a drop goal attempt before having another charged down by Tom Curry and hitting the left upright with a third attempt.

MacGinty eventually put two scores between the sides with a penalty before Ashton pounced on a loose ball for Sale’s third try after Ben Curry had charged down an attempted clearance kick.

La Rochelle finished a well-beaten side but managed a consolation try in the last minute through centre Jeremy Sinzelle.