END_OF_DOCUMENT_TOKEN_TO_BE_REPLACED

What did we learn from the 2021 Rugby World Cup?

How Wayne Smith was able to 'evolve' as a coach

END_OF_DOCUMENT_TOKEN_TO_BE_REPLACED

Some people just don't like change and hold on to traditional ways. Change is exactly what is needed. Starting at the top. Change is good for the gander. Just do it for the Game and Country.

The vibe of the Black Ferns is something England must understand

Vibe is an informal noun that means “a person’s emotional state or the atmosphere of a place as communicated to and felt by others.”

Logic is basically the opposite, a noun meaning “reasoning conducted or assessed according to strict principles of validity.”

Karen Bond is the Web and Publications Editor for World Rugby. In the bustling Media Centre at Eden Park on World Cup Finals Day, she’s not a conspicuous presence. Frazzled photographers and overdressed television presenters fight for that title.

Bond has been the editor of the World Rugby Yearbook since 2012. The English woman knows more about it than anyone else. She deals strictly with rugby logic. Her vibe isn’t that of a loner, but she’s reserved and earnest.

Bond tells me she thinks the Black Ferns will beat England. Why? “Just a hunch,” she says.

Logic suggests that’s impossible. England has won a world record 30 consecutive test matches. The most disciplined team at the tournament boasts 714 more caps than New Zealand and won their last international against the Black Ferns 56-15 on November 7, 2021.

The Black Ferns vibe in 2021 was toxic. It was so bad the only person in the country with the nous and mana to repair it was Wayne Smith.

The “Professor” is the rarest combination of high IQ and EQ. A master tactician with an obsessive work ethic he makes ruthless calls for the better of the collective. The dumping of veteran Black Ferns, Eloise Blackwell, Les Elder, and Chelsea Semple before the World Cup would have come as a surprise to many.

However, Smith builds tremendous competition, trust, empathy, and passion within his players. He can quietly shoulder-tap any rockstar to support his cause. Daniel Carter, Conard Smith and Sir Graham Henry are all friends of the 2022 Black Ferns – rugby royalty summoned in a frantic bid to save face.

In 2013 Smith helped guide the Chiefs to an unexpected Super Rugby title and observed:

“Fundamentally, we wanted good buggers. We wanted more than just a cultural change – essentially creating a champion team is a spiritual act. Not everyone’s cup of tea, but definitely ours.

“We sought an identity and have ended up honouring it. Character was important when selecting the team. We play for our people and our region, which we’ve travelled over.”

What’s the difference between coaching males and females?

If ever there was a moment to capture the vibe of the Black Ferns World Cup campaign it was the margarine-melting smile of Stacey Fluhler.

In the 73rd minute, the Black Ferns were behind 29-31 when Fluhler overhauled an audacious kick by Theresa Fitzpatrick and then delivered an improbable pass off the ground to the similarly cheerful Ayesha Leti-I’iga. It was a try that ultimately won the World Cup. It required such rare courage it ended Fluhler’s game with a buggered ankle.

Fluhler left Eden Park with an innocent, impish, grin spread wide across her face. It was a welcome relief to the furnace of mounting pressure, the opposite demeanour of a hardened All Black. It triggered a euphoric roar from the faithful.

Why would you smile when leaving the field?

Confidence that your mates can get it done. Joy in being part of a historic occasion earned manfully in the face of historic institutional apathy. The 2022 Black Ferns make no apologies for expressing themselves. Smith told his team prior to kick-off that he loved them and was proud of them and he just wanted to go out and play and be true to our DNA.

The Black Ferns’ DNA is that they have been awesome since 1998, the year they won their first World Cup. They play fast, dynamic, exciting, hearty, rugby coupled with a deep connection to Tikanga which values the importance of the land, river, mountain, and family you’re from.

When Captain Ruahei Demant plays for the Black Ferns, she represents everyone in the small village of ?m?io. In New Zealand, everyone knows everyone. Lose and you cop it from the local Uber driver, win and you get a free beer at the pub. That pressure is always palpable and not as obvious in a place like London where they have Big Ben.

The Black Ferns played some awful rugby in the final. Passes were dropped, tackles were missed, territory was surrendered meekly, and the restarts were horrific. The only things that looked likely to stop the rolling mauls were rubber chickens, sledgehammers, nebulisers, speed bumps, another fuel tax, Crusaders, and Willie Apiata VC.

But that didn’t matter. The Black Ferns are the antithesis of risk-averse England. That’s not to say England has no soul, they’re a phenomenal rugby team with some truly wonderful players capable of exciting flourishes. However, the Red Roses were cold and calculated, like a villain in a sci-fi movie where the good guys are defending the rugby aesthetic.

The Sky Tower looked like a UFO had landed above it on Friday, thick fog obscuring Auckland’s tallest landmark. It was the kind of day one associates with grim chapters in Charles Dickens novels. Maybe if the final was played that day, England would have won.

I was assigned Seat Two in the media turbine. It was in a claustrophobic corner resembling a spot young smokers would try and hide in at high school. Delightful volunteer Caren shifted me to Seat 11 with an open window and atmosphere.

I was lucky to strike a brief friendship with Jonah Lomu through Rod Gabb, a diehard rugby fan and a thoroughly decent bloke who has given huge service to Wesley College where Lomu went to school.

When Jonah died in 2015, I was asked to speak about that experience at a memorial service and was presented with a Wesley tie, one of my most cherished items. Only TV jocks and fish heads wear ties to rugby in New Zealand, so it was draped beside me within reach of friendly spectators outside. 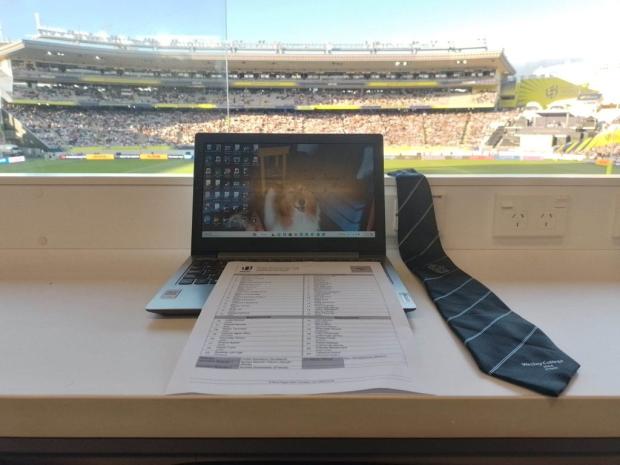 When those fans were made aware of the tie’s history, they would turn around and touch it like Jonah was present.

Plenty of good happened down the left wing when Jonah Lomu wore jersey 11 for the All Blacks. His legend was made against England. Last night saw plenty of traffic in the Lomu lane. Portia Woodman (the Black Fern most like Jonah) was illusive with limited opportunities. Her replacement Ayesha Leti-I’iga is nicknamed ‘the denotator.’ She’s a freak of a finisher.

Everything wrong with the contemporary game was captured late in the first half. England wins a maul penalty. They kicked the ball out and mauled again, earning an advantage. In a rare display of expansion, England stretched play from one touchline to the other. In unfamiliar terrain, England threw an unusually risky pass which Renee Holmes pounced upon and galloped 80 meters to score the greatest ‘crowd try’ of all time. The officious referee called it back. Typical. What happened next? Another rolling maul try for England. That wasn’t supposed to happen. It wasn’t the vibe, but it’s okay.

Saturday’s vibe was about being bold. It was about daring to be different, taking a punt and loving it. It was about a spiritual connection to a style of rugby that Kiwis can relate to.

With respect to Ian Foster, he has the charisma of an insurance clerk. We don’t dislike the All Blacks we just don’t relate to him on the same level as Smithy. The All Blacks vibe appears dour and mumbled compared with the refreshing audacity and Ahora of our Wahine Toa. Even grumpy white men smiled at this World Cup, their frustrations kept in check perhaps by the sheer numbers of mums, wives, and kids present.

The larrkin streak in Smithy’s coaching. The 45kg computer that accompanied the All Blacks to the 1999 World Cup. ‘The Dojo’ gave the Crusaders an early advantage. The best Kiwi rugby coaches have always had an element of an eccentric character.

The Joanah Ngan-Woo lineout steal was all bravado, the call to compete coming from the coach’s box. Maybe Smith had a flashback to Mark Connors, the Wallaby who ruined his All Blacks head coaching career in 2000. That day, the rival jumped quicker.

Auckland was stuck in a punitive 107-day lockdown while the rest of the country largely got on with it. How good was it watching strangers high-fiving and black slapping each other and then discovering they know somebody who knows the person beside them?

England if you’re going to win the World Cup at Eden Park, you must understand the vibe better. It’s not an exact science but it involves more than a rolling maul.

'One of the great experiences of my life': Smith 'proud' after RWC triumph