END_OF_DOCUMENT_TOKEN_TO_BE_REPLACED

END_OF_DOCUMENT_TOKEN_TO_BE_REPLACED
'Spineless': When the All Blacks massacred the Boks in 2011
m
marc 9 hours ago

Ireland’s watertight defence has been a hallmark of their game under Andy Farrell, conceding just four tries in this year’s Six Nations. While on the other side, the 24 they scored themselves gave them the best net differential in the tournament by far.

Their high possession attacking game does aid their defence, holding the ball for long periods certainly helps reduce the chances for the opposition, but their discipline and resolve without the ball has completely smothered sides.

Wales would have been nilled if not for a chance intercept try by Taine Basham when Ireland were pushing the pass inside their own 22 with less than five minutes remaining.

England, who were down to 14 men, could only manage penalties along with Italy. Scotland crafted 14 phases for a barge-over try from close range for their lone score in their 26-5 defeat.

France managed to score two of those four tries against the stingy Irish defence. The All Blacks, who also scored two tries in November, will have to work hard to break down what is a very strong system when at full strength.

There are few systemic weaknesses but there is one, and that is when Kiwi halfback Jamison Gibson-Park defends on the backside edge following a lineout.

The smaller, shifty halfback is left out there to defend large territory without the help of speed athletes at times which leaves Ireland vulnerable to mismatches.

When France scored inside the first two minutes in Paris, they were running a launch pattern to target Gibson-Park’s edge.

They took a quick lineout and worked all the way to the left-hand touchline, before orchestrating play back right towards the lineout formation where Gibson-Park was defending.

They deliberately left Uini Antonio (3) out wide to use as crash runner to use on the way back to crater Ireland’s line. Ntamack (10) found his runner Antonio with the perfect target lined up, smallish wing Mack Hansen (11). The force of the monstrous French prop punctures through Hansen and indents the Irish defence, sucking in multiple defenders and leaving Gibson-Park (9) isolated on the outside.

France ended up with a situation where Hansen and Gibson-Park, two smaller backs, were manned on the thin short side against the entire French backline. 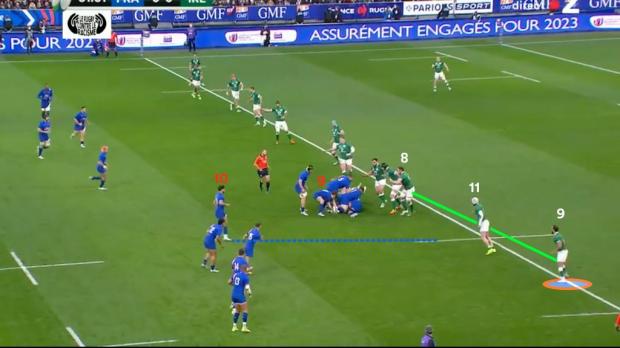 This is what France wanted to manufacture and they proceed to exploit two of Ireland’s smallest defenders with a numbers advantage. Hansen and Gibson-Park slid out which allowed Ntamack to take on the line. He flung a fortuitous pass back inside to Antoine Dupont which was gathered for a try. 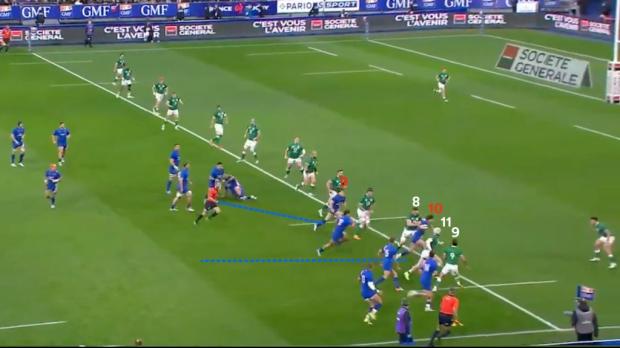 Later in the half, they target Gibson-Park again from a multi-phase set-piece launch, this time isolating his halves partner Joey Carberry on the short side with him. 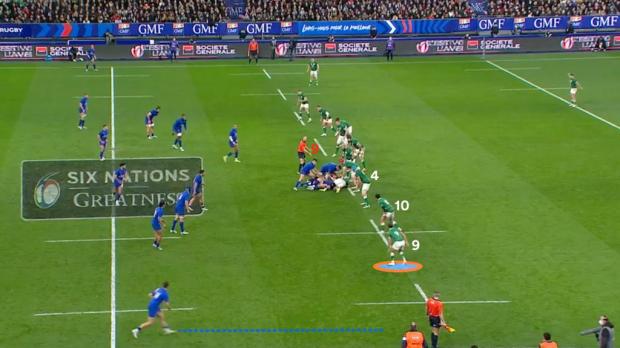 Communication from wing Damian Penaud to Antoine Dupont identified the space outside the Irish halfback and the French No 9 whipped an incredible long ball over the top into the space. 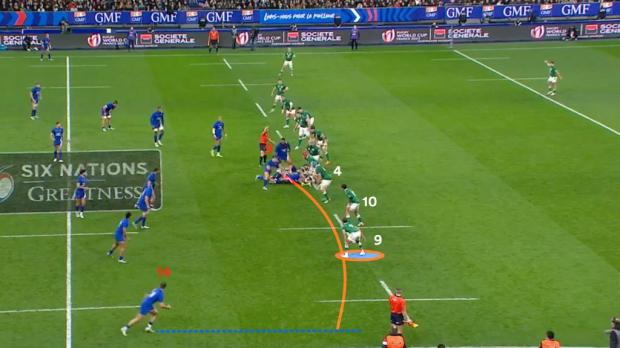 The pass to Penaud led to a line break which resulted in three more points for France.

England and Scotland found success targeting the same defensive set-up through a blindside raid directly off the maul.

Scotland had Gibson-Park isolated with a two-on-one against Ali Price (9) and Duhan van der Merwe (11). The Irish halfback did a great job of shading both players and forcing Price inside, but Scotland still peel off a massive line break. 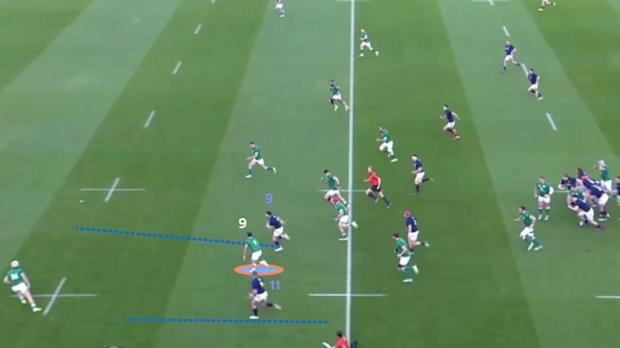 England spent a lot off first-phase ball on kicking, so did not attack often from set-piece, but in the second half they created the same blindside setup by mauling infield.

Harry Randall (9) broke away down the blind before he linked with Marcus Smith (10). England weren’t able to manufacture a clean break but did march a long way upfield before winning a penalty a few phases later. The All Blacks have used a similar maul play borrowed from the Crusaders’ playbook in the past that involves deliberately pushing the maul infield to create more space on the short side. Halfback Aaron Smith (9) breaks to the open side before playing Richie Mo’unga (10) underneath on a switch line back to the short side. The Crusaders used this play against the Blues in the Super Rugby Pacific final.

First phase switch plays from the maul can be a way to get wingers Caleb Clarke, Leicester Fainga’anuku, Sevu Reece or Will Jordan matched up on Gibson-Park.

The multi-phase patterns that track back down the short side are a perfect tool to find that mismatch where Gibson-Park can be isolated against powerful ball runners like Akira Ioane or Ardie Savea floating out wide.

Either way, the All Blacks must find this match-up and make the most of it because the Irish defence is otherwise very strong and has not offered much else to opposition sides.