New competition will excite Cruden Next
Back
Internationals

Re-elected World Rugby chairman Sir Bill Beaumont and his newly elected board have their work cut out for them.

The game of rugby globally is in flux, partly because of the effects of the COVID-19 pandemic, yet the current global health crisis should not mask the issues that have been affecting the health of the game itself.

Rugby is not dying, but is in dire need of a health check and a change of lifestyle.

The sport can no longer sustain itself as it once did, living off healthy broadcast revenues with administrations enjoying the largesse such revenues once brought. All at a time when the frugally maintained grassroots of the game were a nostalgic afterthought.

One only has to look at how the game in Australia has been administered since the advent of professionalism at the end of 1995 as a case study into how a once powerhouse in the international game now currently hinges on the precipice of financial ruin and languishes around sixth or seventh on the world rankings.

There is no doubt there are many prescriptions and therapies ready to be offered to remedy the rugby health crisis, but for rugby to treat its infections, it simply must rediscover what it once was.

It was a running game that was championed by those who had an all-round athletic ability, a tough constitution, work ethic, team focus and a creative, adventurous spirit whose love of the game was evident by the manner in which they played it.

If you were any good at rugby, you would be picked in the better sides. If you were mediocre there’s a game for you, and if you were just north of hopeless, guess what? Rugby welcomed you.

There was no need for diversity policies and it didn’t matter what school you went to. It never truly has and it is a lazy argument to suggest otherwise.

If you asked the late, great Queensland and Wallabies coach Bob Templeton if his side had a diversity policy, he would probably answer, “Yes, we will both kick and run the ball.”

However, for one reason or another, the playing of the game has become lobotomised.

Where once the game encouraged and allowed for creative and open play, the playing of the game has become too risk-averse and transformed into a game of power as opposed to one of athleticism and skill. A game based on moving from one structure to the next constricting the team in possession of space along the way as the path to victory.

Why on earth would World Rugby, in all its previous incarnations and branding, ever allow a game that championed defence and the limiting of space if it knew its true self?

Among the shock revelations was the drop in popularity of rugby union as only the ninth most popular sport in the Australian market.https://t.co/KNvrzUl6h3

It appears it does not as the game has transitioned itself into a complex exhibition that wants the player and spectator alike to be entertained by collision over continuity.

If the fan wants that, they can watch rugby league or American football.

In its effort to evolve rugby, the sport has grown closer to its offspring, is failing to differentiate itself from them and is lost in the fog of professional sport.

Subsequently, the size, shape and abilities of the rugby player have changed as the game demanded greater power and less mental prowess.

We now regularly see outside backs who weigh in over 100 kilograms in search of space or meters running back into tight forwards who can weight over 130 kilograms.

The collision impact can be enormous, if not dangerous. Then we see those gigantic forwards running in their respective ‘pods’ head down ploughing themselves into the next possible concussion looking for the all-important meters and quick ball to again search for space.

So, it is ultimately about space. World Rugby must adjust the current laws to allow for space to exist both from the restart and general play.

The need for more athletic players who are willing to exploit the space and thrive in the unstructured moment will come to the fore as there would likely be less requirement for bulldozing pods as a form of space creation masquerading itself as entertaining play.

“I have a clear mandate to work with Bernard [Laporte] to implement progressive, meaningful and sustainable change,” Beaumont said.

“As an organisation, we must lead, be transparent, accountable and continue to serve for all. We must be united in our drive to make this great sport even better, simpler, safer and more accessible. We must listen to players, fans, competitions, our unions and regions, and take decisions that are in the best interests of all with our strong values to the fore.”

Well, Bill, here is a couple of thoughts to get you started.

Under the current laws, the scrum-half not in possession at a scrum situation can impose themselves into an aspect of play he or she has not earned the right to participate in.

It’s legislated fraud in my opinion. As you will see from the diagram below, taken from World Rugby’s website, the offender in waiting is in red. 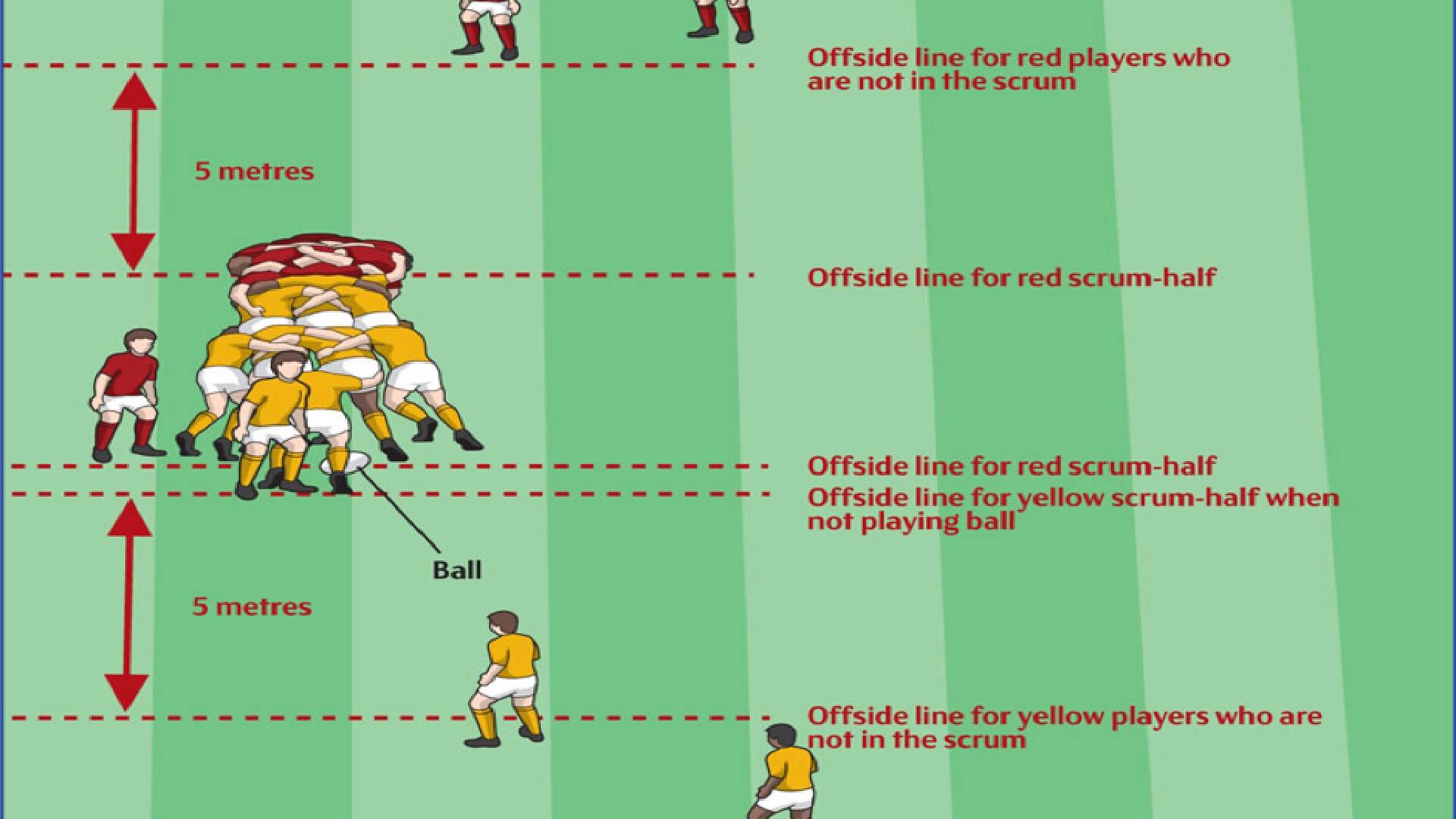 The scrum should be a contest of eight versus eight, not nine versus nine.

As it stands, a scrum-half not in possession can move right to the last feet of an opposition flanker, and often limits the opportunity for a No. 8 to run from the base of the scrum, or be a distributor, as the scrum-half legally loiters around an area of the scrum that their side has lost.

Why is this allowed?

For some illogical reason, a player who for all intense purposes has had no part in the scrum contest gets an opportunity to try and disturb the possession won in a contest he or she was not a part of.

To be blunt, it’s rubbish and frustrating to see a law that allows cheap unattractive play to potentially stifle the opposition’s rightfully won possession and all the glorious possibilities that affords.

The scrum-half not in possession should, post the scrum feed, have to move behind his own No. 8, or start from there, thus freeing up space for attacking possibilities.

Secondl,y lifting in the lineout appears to have contributed to the reduction of space in the midfield and beyond.

Lineouts have become such a specialised aspect of the game that teams frequently look to use shortened variations of the set piece, allowing forwards to occupy space in the midfield as ball runners.

This reduces the space for attacking players to run at as they are marked up in defence by their opposition forwards.

In the absence of a legal lift, it would then invite the more athletic, skilful jumper to once again find their place in the game.

Presently, a successful line out is more contingent on the successful timing of the throw and lift, as opposed to the jump itself. Again, there is an imbalance that favours the power of the lift, over the guile and athletic ability of the single jumper.

If the laws were reverted to single jumpers duelling for the ball, a greater contest would ensue, and the logic would be other forwards would likely position themselves in the lineout to be readily present to assist in the security of possession, or to exploit any error that may have occurred.

That would prevent an overpopulation the midfield and create more space.

Furthermore, if lineout lifting were removed, it would likely be safer for the jumper as the heights they currently reach being lifted are dangerous heights to fall from if the grip or balance of either lifter is lost.

Falling from the height of an unassisted jump would be profoundly less dangerous.

If lineout lifting is to remain legal, perhaps shortened variations should be outlawed, bringing all forwards into the lineout to ensure there is that all-important space for an attacking side to exploit.

Such adjustments would foster a more open game thus attracting new fans and reigniting old ones. The adjustments would help to make rugby a fun, safe, easier game to understand, for the player and spectator from the grass-roots to the international stage.

Since the announcement of Beaumont’s re-election, 2003 World Cup-winning coach Sir Clive Woodward said, “I would argue that the situation for rugby worldwide is about to become so fraught and fast-moving that what is needed most is innovation and action.”