END_OF_DOCUMENT_TOKEN_TO_BE_REPLACED

Just make sure you stay a Mooloo.

END_OF_DOCUMENT_TOKEN_TO_BE_REPLACED
'It's happening': League boss sounds the alarm in response to Sonny Bill Williams
A
Andrew 11 hours ago

What is the shot? A sell timed tackle to stop a movement that if badly timed is either offside or leaves a hole in the defensive line. How does it differ in execution to any other tackle? Williams doesnt make sense.

Since the All Blacks mid-season loss to Argentina in Christchurch where they kicked just 15 times, there has been a definitive shift in the way the All Blacks attack which continued through the Northern tour.

Whilst they brought in the appetite to run it from deep against South Africa at Ellis Park, after the defeat to Los Pumas they came to the conclusion they should use their skilled kickers a lot more to unlock defences.

Attacking kicks have always been in the toolbox for the All Blacks, but they’ve never had this many capable options of delivering it. Dan Carter used to have the ball on the string, but his outsides were rarely asked to boot to ball in the manner that today’s backs are.

The importance of kicking options across the backline has become paramount to the All Blacks plans for a revival and will likely dictate selection going forward given how this is forming a larger part of how the team wants to open up the field, given the success they have had so far.

David Havili has a skilled kicking game but so does Jordie Barrett, so either of them are going to be preferred options at 12 over Quinn Tupaea and Roger Tuivasa-Sheck.

If the younger Barrett is in the midfield, Beauden Barrett is the obvious choice at 15 as he is a maestro off both feet. If both are at 10 and 15, Havili can play 12 and still bring a kicking game to the midfield.

With Richie Mo’unga and Aaron Smith in the halves, there are accurate kickers everywhere across the backs to implement a varied kicking attack to combat a well-oiled defensive line.

Left wing Caleb Clarke was the main target early at Twickenham against England, with three cross-field kicks coming his way within the first 15 minutes from three different kickers no less.

Richie Mo’unga, Beauden Barrett and Jordie Barrett were the marksmen tasked with landing a pinpoint kick pass to the No 11 which meant that all three early kicks came from different spots, highlighting the variety of options at the All Blacks disposal.

This wasn’t necessarily a ploy to target England’s right wing Jack Nowell, it was just a continuation of the play that they have used against anyone for a fast-break exit.

In Melbourne against the Wallabies, Jordie Barrett identified the space on the edge and found Clarke on the full in open space for a nice break downfield.

Centre Rieko Ioane and Clarke couldn’t connect on that occasion, with the No 13 taking an inside support line which nearly led a collision between the two.

With wingers often defending space deep in the backfield, the All Blacks are simply taking the space on offer despite being inside their 22.

It is a bold tactic that few if any other international teams will try to replicate being in such a high risk area of the field.

The Blues pair were finally on the same page early in the second half against England, running a switch around the edge after Clarke’s catch leading to an explosive long-range try for Ioane.

The execution by Clarke couldn’t have been better, timing the pass perfectly to hit his centre on the fly at full pace, and the anticipatory line by Ioane was excellent to get into a position to make a play.

The All Blacks coaches would have been pleased to see Clarke complete the play after a similar opportunity went begging in the first half from the first cross-field kick by Mo’unga. 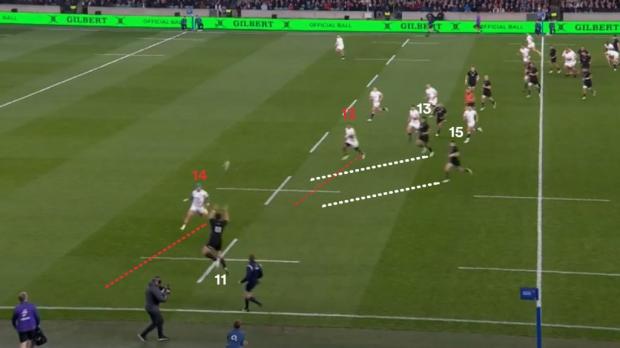 The left winger pulled in Mo’unga’s kick with an acrobatic leap, and although Jack Nowell (14) covered the space, England were stretched quickly with a lagging disconnection forming between Nowell and Manu Tuilagi (13).

Clarke instinctively stepped inside Nowell which created a potentially seam to run forward into and commit multiple defenders. 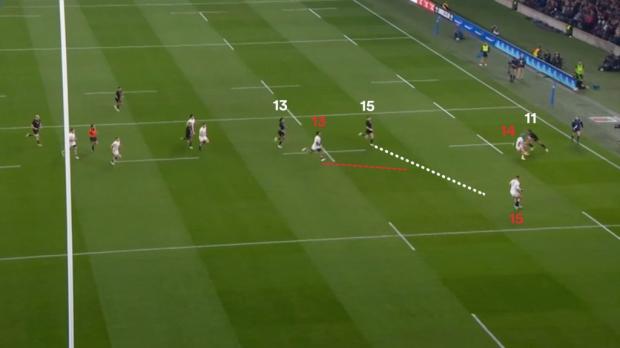 The 23-year-old had the attention of three England defenders who might’ve all committed to contact at a similar time, but Clarke’s instinct was to try and cut back inside and beat another defender with the step.

This has been a frustrating part of Clarke’s game: the lack of intent to offload or find a runner in support once in space to show the vision to take the best option available. 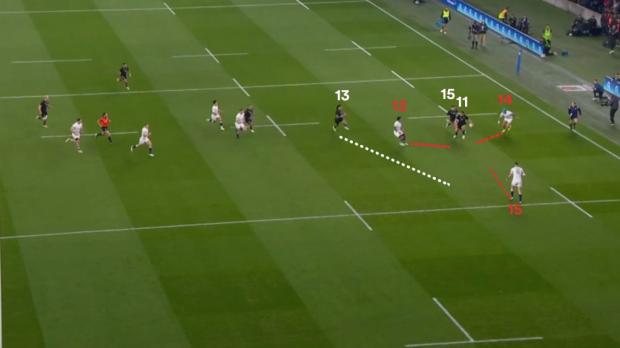 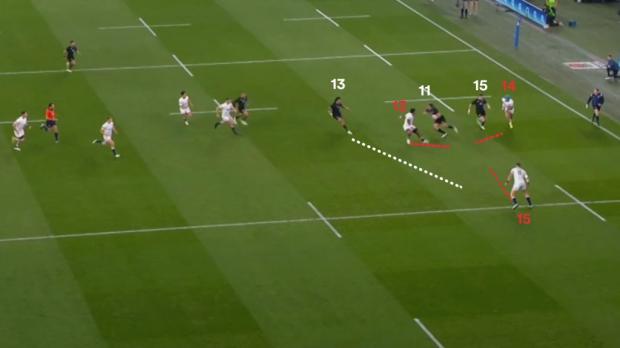 Clarke opting to beat another defender killed the momentum of Rieko Ioane (13) and allowed the next inside defender, Owen Farrell, to catch up from the inside.

Ioane was completely unmarked on a support line inside Clarke, screaming out for a pass to keep the movement alive, but the pair almost collide once Clarke tried to step again. It is these half chances that Clarke has to find a feel for, sensing lanes opening up for his support players and knowing when to sacrifice himself and promote the ball to take advantage.

His brilliant play in the second half to link with Ioane showed he is capable of making such plays which is a great sign he can take his game to the next level and become less one dimensional.

The missed chance by Clarke showed the All Blacks still have plenty more to capitalise on, but that they are creating many opportunities from their attacking kicks.

Earlier in the tour the kicking game delivered a fast start against Scotland, leading to the opening two tries.

The first set-piece play of the game against Scotland was a miss-hit kick pass by Havili that went behind Mark Telea, but the Blues winger still managed to turn it into a break after rescuing the play. From an ensuing penalty at that next ruck, Scott Barrett barged over for the first try.

On Telea’s own try minutes later, back-t0-back kicks were used to dismantle Scotland by the Barrett boys who perfectly illustrated how to manipulate a backfield defence to create breaks.

On a short side with nothing really happening, Beauden Barrett thread a grubber kick in behind the Scotland defence where the space was offered.

With no active sweeper scanning for short kicks in behind, this was a vulnerability in the Scottish defence the All Blacks would have prepared to target. The perfectly weighted grubber off the left foot was placed where Scotland were vulnerable and centre Anton Lienert-Brown received the dream bounce to regather the ball and spark the initial break. 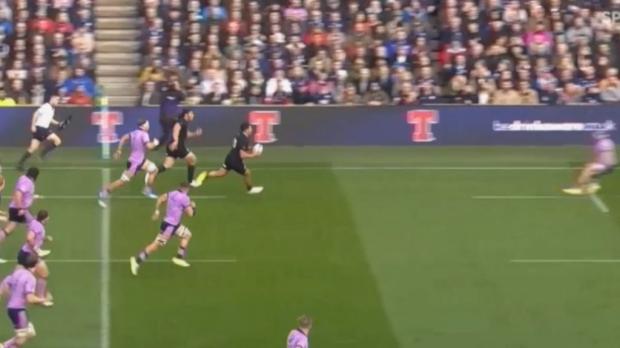 He was able to commit Darcy Graham and put Caleb Clarke (11) away down the sideline, which further weakened Scotland’s backfield when Stuart Hogg (15) had to cover Clarke. 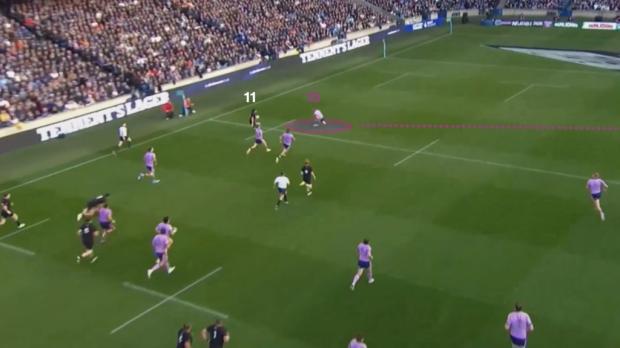 The All Blacks had the Scots on the ropes with no backfield coverage after Clarke was brought down.

Fullback Jordie Barrett (15) stepped up on the next phase to capitalise on that weakness with another kick, punting a low drifter wide into the path of Mark Telea. 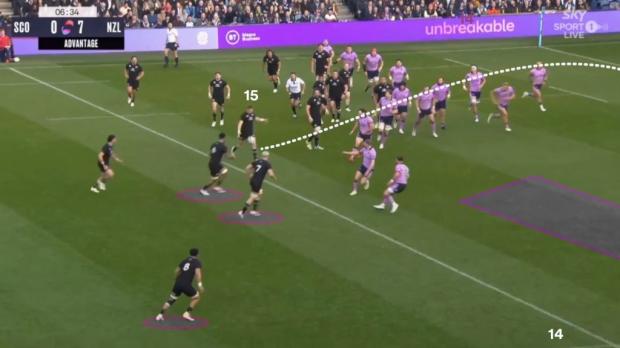 Barrett’s skidding punt perfectly sat up for Telea, over the top of Duhan van der Merwe (11) and into the vast open space on the right hand side.

The debutant winger scooped and scored in one motion to put the All Blacks up by 14-0 very early. 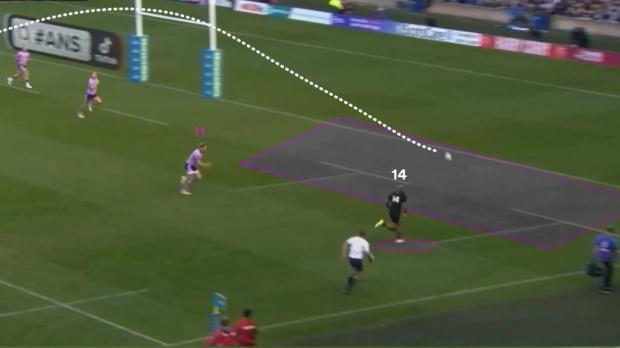 It was a perfect illustration of backfield manipulation, stretching Scotland touchline-to-touchline through two regathered kicks.

There were no missed tackles or bad reads by Scotland, just an inability to cover space and the exploitation of that through sublime skill from the Barretts.

The All Blacks took their attacking kicking game to greater heights in 2022 once Joe Schmidt joined the coaching group, putting a bigger emphasis on using kicks to generate opportunities.

This was also a better use of the skills that players like Richie Mo’unga and David Havili bring to the table.

When you can’t break a defensive line, you can always go over it. If you don’t score directly off a regathered kick, the defence is usually scrambling to get back onside which negating their ability to rush and allowing for more phase play on the front foot.

Having that extra string in the bow has been a part of their improvement since the poor showing in the Ireland series.

The way defences are constructed has forced the All Blacks to rely on a skilled group of kickers to do that. This is one of their key variations that they will look to utilise in 2023 which other teams do not currently have.

England in 2019 had as many skilled kickers in their attack with Ben Youngs, George Ford, Owen Farrell, Henry Slade and Elliot Daly, but have since lost touch with that style of play.

The All Blacks are the only side looking to use attacking kicks, grubbers, chips, cross-field kicks, from positions all over the backline in any area of the field.

If they continue to get it right, it will help add another dimension to their attacking arsenal as they look to rebound from an ordinary 2022 season by their standards.