Beauden Barrett's stint in Japan has reinvigorated his attack

The tide has well and truly turned for Beauden Barrett, who has found flashes of his best form as the Blues attack has become the best in Super Rugby Pacific over the last couple of months.

Barrett’s season started to take off after the Blues nilled the Chiefs at home by a score of 25-0.

The first-five had two try assists, a cross-kick to Tom Robinson after he had originally sparked a long-range counter-attack on a kick return, and a wide cutout pass over the top to AJ Lam for the second.

In Christchurch against the Crusaders, Barrett had a mixed bag of moments, including charged kicks and cheap turnovers, but he ultimately came up with the big plays to get the points his side needed.

He almost scored himself from a long-range line break, only for his halfback Finlay Christie to dive over on the next phase to secure the try.

It was then Barrett who originally put Dalton Papalii into space down the left-hand touchline and the flanker busted through the Crusaders halves to make a try out of it.

His play of the night came when he saw space in the Crusaders’ 22 following an exit kick where the home side had no one defending.

He had fielded the kick in the Blues’ backfield and decided to pin the ball back deep and back himself in a foot race.

In attempt to and regather and slide over from five metres, Barrett couldn’t bring the ball in when sandwiched between the Crusaders cover tackles.

It was a near miss that would have been a classic Barrett try, one only he could have come up with.

The reason why it was an important play, despite not yielding a return, is because it was the type of magic that he was able to conjure during his brilliant 2016 and 2017 seasons at test and Super Rugby level, and, to be fair, in 2018 and 2019 in spurts.

The return of Barrett’s running game and speed has been a big part of this explosion of attacking production. He seems to have regained some of the speed that he used to have, and that is resulting in more opportunities for him.

On this phase against the Reds, the Blues lost a lot of ground but still created an opportunity in the next phase. Barrett can rely on a fast recycle despite his side going backward.

Bryce Heem (22) played halfback in order to get the ball to Barrett quickly on the short side where only Suliasi Vunivalu (14) was left defending. The speed of the recycle preserved the opportunity before any of the Reds’ tight five forwards could fold. 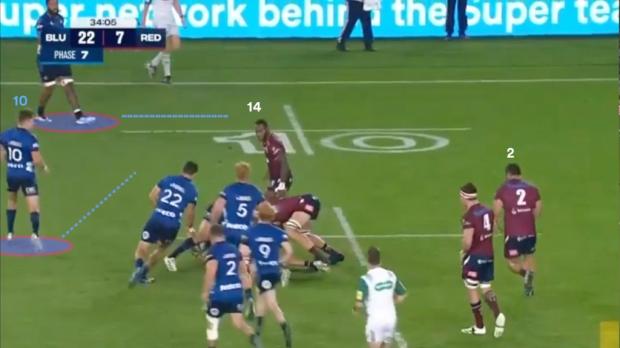 After a kick through by Akira Ioane, Barrett burnt past Tate McDermott and only a covering effort from James O’Connor helped prevent a would be try.

The speed and acceleration Barrett is known for was back on show to catch up to McDermott and then pass him and almost score.

His pace was back on show later in the second half in the two phase try he scored from the line out maul.

After breaking the line on the first phase directly after the maul, he had open pasture to regather the ball from a Stephen Perofeta grubber kick on the next phase with an empty Reds backfield.

The 30-year-old Barrett has found the juice to maintain his best asset, speed, which has always been the foundation of his game and catalyst for the out-of-the-box big plays that he has produced.

Perhaps this can be traced back to his sabbatical stint at Suntory in Japan last year in a competition where the game is less physical, more open, and a lot faster.

The chance to find open space happens frequently, and players end up running free more often. It seems to have sharpened up his acceleration and sparked his creative vision once again.

He went from Top League action straight back into the All Blacks last year and showed how dangerous he could be, running riot against Argentina, busting the Springboks open from a scrum play, and then scoring twice against Wales in his 100th test.

Now he is breaking the line far more frequently for the Blues and creating more tries than he was for the side in 2020, when he was stifled a bit at fullback and did not have the size on his frame – a result of coming back to the Blues early from a post-World Cup break due to the pandemic.

Barrett is getting back to his best which bodes well for the Blues and by extension, the All Blacks when the Irish visit in July.