END_OF_DOCUMENT_TOKEN_TO_BE_REPLACED

Wait a second, this is the third article moaning about the referee's decisions for the Bok-Eng game. I thought you guys were ok with refereeing mistakes as it was all part of the game? Why are you complaining so much?

END_OF_DOCUMENT_TOKEN_TO_BE_REPLACED
'We are making it a bit boring': Former Bok coach's gripe with current approach
A
Akansagena 1 hours ago

Andy Goode: Why I like the new Heineken Champions Cup format

European rugby is back this weekend and the new format makes it the most wide open competition we’ve ever seen.

After three French sides reached the semi-finals of the Heineken Champions Cup last season, and Les Bleus beating the All Blacks last month, many will be expecting more French domination but it’s almost impossible to predict this time around.

I really like the changes that have been made to the structure of the tournament and we should see far fewer dead rubbers than in the past with teams still being able to qualify after losing their first couple of games.

However, that does mean we may get a few more unfamiliar names doing well and it might not be until the knockout stages that we see the teams with real European pedigree using that to their advantage.

Home and away legs in the Round of 16 is an exciting new addition as well and it’ll be fascinating to see how teams approach that once the pool stages have been navigated. 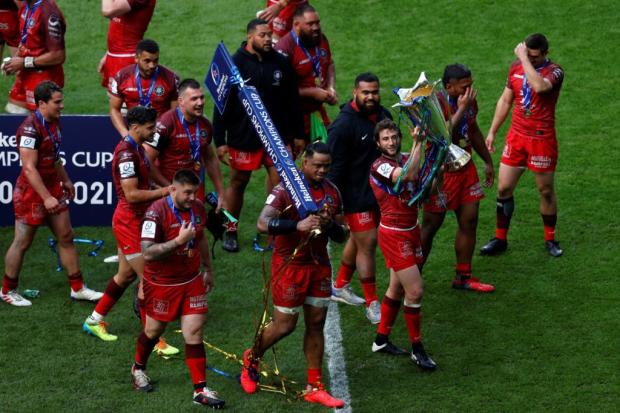 For now, though, last season’s finalists Toulouse and La Rochelle will fancy their chances of making it through as highly seeded teams and, from an English perspective, Premiership champions Harlequins have been dealt a favourable hand.

They have never got past the quarter-finals in the top tier so it remains to be seen whether they have what it takes to go deep into the competition but facing Cardiff and Castres, who are often the French outfit that takes Europe least seriously, means they should comfortably make the knockout stages.

The tie of the opening round, without doubt, is Bordeaux v Leicester as the Top 14 leaders take on the best the Premiership has to offer so far this season.

The Frenchmen will be favourites but, with Matthieu Jalibert missing and the structured way the Tigers are playing under Steve Borthwick, I wouldn’t be at all surprised if my old club gets off to the perfect start with an away win in France.

Last season’s Champions Cup was severely affected by Covid and we were denied all the usual colour and passion of the fans for most of the season, so we can only hope that any further restrictions don’t deny us that this time around as that’s what makes it so special.

We’ve already seen Covid affecting the tournament before it’s even begun, with the Scarlets forfeiting their opener, Cardiff and Munster massively hampered and concern around some cases in the Clermont and Leinster camps now as well.

Munster should be able to ride it out with the resources available to them but it’s hard to see the two Welsh regions being able to feature prominently after starting firmly on the back foot.

Speaking to Stephen Larkham, Munster really fancy their chances more this year than in recent years even with the Covid-related disruption they’ve faced.

Their bitter rivals Leinster are always there or thereabouts nowadays but they’ve only won it once in the past nine years. After Ireland’s resurgence in the autumn and with 12 Leinstermen starting their win over the All Blacks, though, they’re primed for another tilt. The big French sides will still be the ones to beat, especially with Premiership clubs having to tighten the purse strings a bit more while the Top 14 clubs continue to spend pretty big, but I think it’s wide open this year and there’ll be some surprises along the way.

Fans back in numbers, a new format and extended knockout stage to look forward to, fewer dead rubbers before then and more attacking rugby being played this season mean there’s something for everyone to look forward to in Europe this time around.

Exeter were a new name on the trophy a couple of years ago and a lot of teams will feel they’re in with a shout this season more so than before. That said, see you in Marseille in May for a Leinster v Toulouse final!