END_OF_DOCUMENT_TOKEN_TO_BE_REPLACED

'A tough 12 months': What the Blues expect from forgotten star Caleb Clarke

New Drua signing is 'immense' and a 'household name' in Fiji

END_OF_DOCUMENT_TOKEN_TO_BE_REPLACED

Analysis: The Premiership-style attack system the Blues are finally mastering

The Tasman Mako played with a high tempo with varied ball movement under Leon MacDonald, but the Blues have been more cautious, building on the foundation up front first.

They have had one of the best scrums in Super Rugby for awhile, and no shortage of powerful ball carriers like Akira Ioane and Patrick Tuipulotu.

The phase play suffered at times as the pack built for power didn’t have a high level of stamina or mobility, at least not at the level required to master all the detail in MacDonald’s pattern.

Leon MacDonald and Aaron Mauger after the Blues Highlanders clash

Leon MacDonald and Aaron Mauger after the Blues Highlanders clash

The shape the Blues have been mastering since MacDonald’s arrival is the same one used by the Mako and commonly found in Europe. The pattern plays a 3-2 pod configuration in the centre of the field and is used to play with faster width with generally fewer phases in the middle of the field. 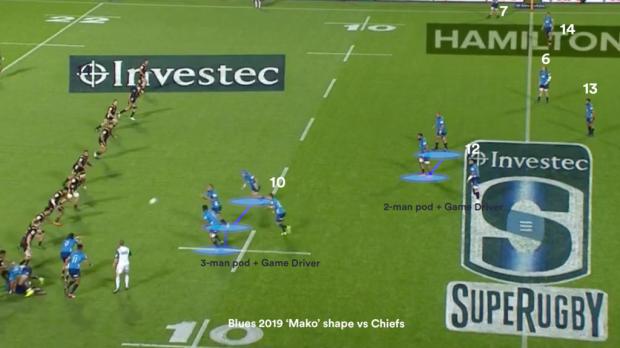 Their ability to execute the midfield pattern was inconsistent last year, often turning sloppy under fatigue.

Tired forwards were often unable to run the support or decoy lines required, even front running the ball carrier at times, which hampered the distributors, making it easy for the defence to eat space and disrupt an already clunky system.

It has been a work in progress, which has slowly come to fruition and is now being aided by having a world-class game driver in Beauden Barrett alongside an ever-improving Otere Black, with greater levels of conditioning among the forwards. The Nock-Black-Barrett distributing link has been critical in making quick decisions to facilitate the ball movement at a higher tempo than before.

And now the detail is finally being applied as it is intended, which is leading to results in breaking down the defence. A key part of the system is one effectively and best used by the Exeter Chiefs a few seasons ago, where the wingers are ‘unhinged’ and looked for work in-field.

Exeter mastered this short side switch play which the Blues are now using.

After the first pod of three carries, we see the winger drift infield to station as the first receiver of the blind side. 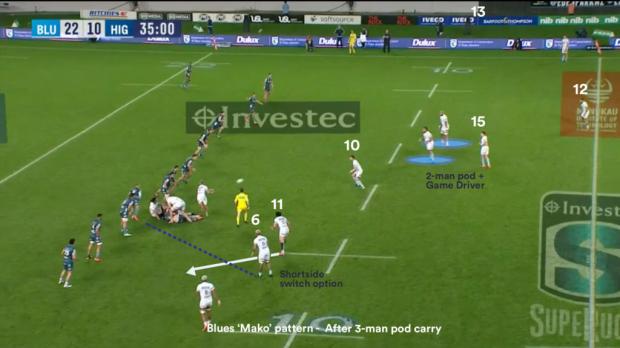 After the first carry, the halfback can either continue the same way to the open side where the two-man forward pod configuration is or switch play back to the short side using the winger Caleb Clarke (11) behind a screen.

Early in the first half against the Highlanders, the Blues get the perfect opportunity to run the switch of play.

Some deft handling by Josh Goodhue puts Alex Hodgman into a half gap with a tip pass, leading to a big gain line run and front-foot ball. 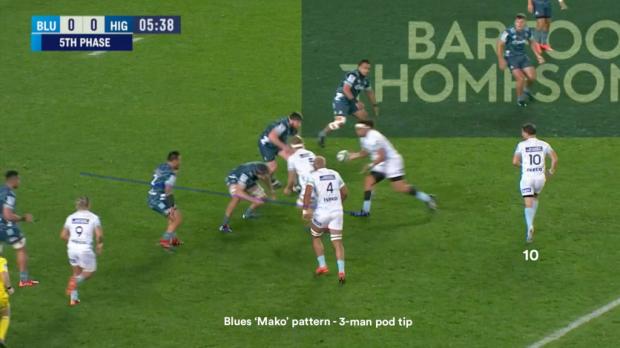 Caleb Clarke (11) has pushed infield to become the first receiver while Akira Ioane (6) is next to him ready to run the switch. Akira Ioane runs a flat option decoy off halfback Sam Nock (9) to hold the defensive line. The screen pass out the back will get the ball in the hands of Caleb Clarke for a carry.

This is the exact same switch pass play the Exeter Chiefs used with Jack Nowell, Santiago Cordero and Ollie Woodburn that resulted in upping their usage rate above a normal level for a winger.

The Blues are doing the same to help get more touches for their most elusive players – Mark Telea, Rieko Ioane and Caleb Clarke. Parkinson also cannot push off the line as the flat option by Ioane holds him on his heels. Parkinson is drawn into contact with Ioane, giving Caleb Clarke a one-on-one with Marino Mikaele Tu’u (8).

This is a difficult assignment for Tu’u as he is forced to make a spot tackle on Clarke without any inside or outside help just five metres from the line. He is also forced to play in-to-out as the Blues still have an overlap outside him.

In the event Clarke passes, he needs to keep pushing out to cover the numbers disadvantage, so is susceptible to the left foot step, which is what Clarke has in his arsenal. He moves Tu’u further off his spot with a nice dummy and shifts inside him cutting back off the left foot. 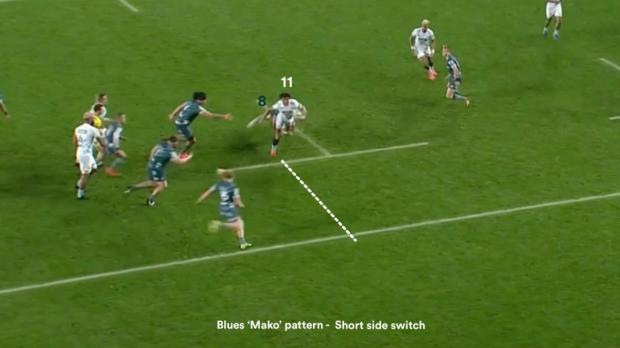 Once Clarke is through Tu’u, it would’ve taken a superb bit of cover defence to stop him but the Highlanders can’t and the Blues score the first try, using the short side switch to do so.

This play doesn’t just need to be for the wingers, the Blues can utilise any of their outside backs in this role.

Switching play back to the right hand side below, Rieko Ioane (13) fills the role instead of wing Mark Telea (14), allowing him to get another touch on the ball. The Blues stable of power loose forwards and elusive speed backs makes this short side reload extremely difficult to handle.

You will often see any combination of Akira Ioane, Hoskins Sotutu, Rieko Ioane, Beauden Barrett and either of Mark Telea and Caleb Clarke on this short side, making the switch an attractive option for the Blues.

All of the aforementioned players often take multiple defenders to bring down and are all gifted offloaders. It is a recipe for chaos down the narrow channel, and the Blues have been channeling play back down the short side frequently in Super Rugby Aotearoa.

This screen-switch to the winger is just one play that is possible in this scenario, with other variations sure to be developed.

We have already seen the detached winger leave the short side and provide an inside option off the 10 on the open side first receiver if called for, playing both sides of the ruck. Instead of lining up next to Akira Ioane (6), Mark Telea (14) has moved to Otere Black’s inside hip to be a part of the next phase on the open side.

It is no surprise that Rieko Ioane (10.8 per game) and Mark Telea (9.1 per game) were second and third in runs by wingers before the original season was suspended. Only George Bridge averaged more, who also played some games at fullback.

Rieko Ioane had the highest number of average possessions per game (20.8) of any winger.

Now that Ioane has moved to centre in Super Rugby Aotearoa, it is Clarke getting those extra touches, thanks to a system that is finally clicking.

Against the Highlanders, Clarke, Ioane and Telea were three of the top five ball carriers in runs for the Blues.

Combined with a sharpened counter-attacking system that also feeds those dangerous backs, the Blues are clicking on all cylinders.

Related reading
Analysis: The small things Beauden Barrett has brought to the Blues that are bringing big results

The transition game paid more dividends against the Highlanders after an overcooked kick from fullback Scott Gregory sparked a Blues kick return.

The shift from Barrett after fielding the kick gave Caleb Clarke the opportunity to go one-on-one against Ash Dixon, breaking through and finding Rieko Ioane in support.

The biggest test still awaits this rising Blues side, after the bye they will travel to Christchurch where the Crusaders haven’t lost since 2016.

But if any team is going to break that undefeated streak this year, it is this version of the Blues who are finally putting things together.