Analysis: The next generation All Black backline to unlock the Springboks with Super Rugby's latest trend

The All Blacks will be plotting the path to France over the next four years, with a primary goal of arresting back power from the Springboks.

Although 2020 may go down as a lost season, many young backs were climbing through Super Rugby at a fast rate. Backline depth is promising for New Zealand.

One fullback prospect who made leaps and bounds in 2020 is the 23-year-old Jordie Barrett, who assumed a more prominent role in the Hurricanes’ attack with brother Beauden leaving.

The Hurricanes set-piece attack under Jason Holland has always utilised a rather deep set-up.

We often see the fullback stationed behind the midfield as a deep option. With Barrett’s pass, he can link with his winger from a long distance. TJ Perenara (9) and Beauden Barrett (10) were a formidable playmaking duo, with both able to assume the role as primary ball-player from set-piece strikes.

Perenara still holds his role but Jordie Barrett (15) has elevated to join him as an edge playmaker with Jackson Garden-Bachop (10) offering the distributing link between the two.

A lot of the Hurricanes’ plays use Perenara as a halfback on the run, moving from the base of the lineout or scrum to a quasi-first receiver. Again, Jordie Barrett is set-up behind the centre as a midfield link. If none of the three flat options present a worthwhile attacking opportunity, Perenara can link with Jackson Garden-Bachop (10) on the second level out the back to find Jordie Barrett (15) in the midfield to attack the edge.

On this play, Perenara pushes a flat pass for one of the midfielders, which is picked off by Lukhanyo Am and ends up as seven points for the Sharks. 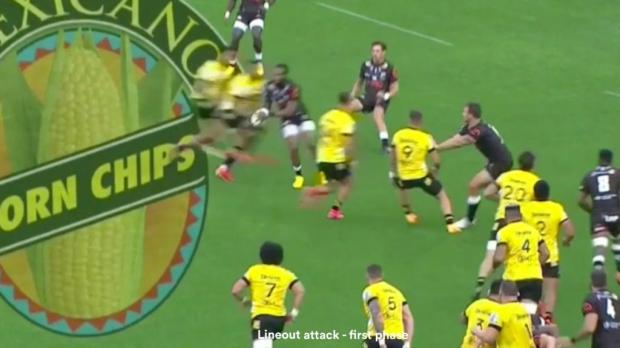 The next time the Hurricanes are in an attacking zone, they run a similar concept with Barrett again stacked deep in behind the midfield, with a very narrow formation.

The Sharks adjusted their defensive set-up to cover the threat of Ngani Laumape hitting the interior channels, with Andre Esterhuizen defending at 10 and Lukhanyo Am defending at 12.

This paid off on Am’s intercept but the Hurricanes quickly realised the edge would profit.

This time, they use two staggered ‘screens’ to get the ball deep to Jordie Barrett. 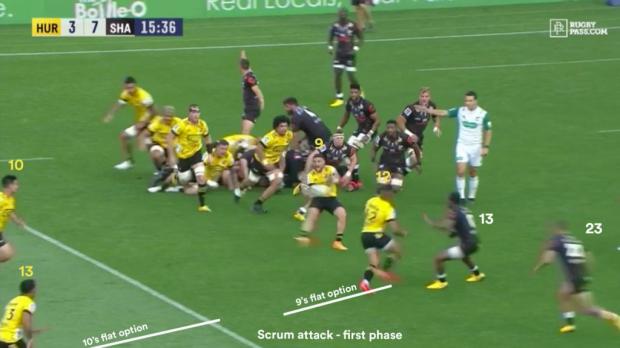 The Hurricanes get what they want, the ball in Barrett’s hands, but winger Wes Goosen (14) had called early for the cross-kick and had mistimed his run off the 10, overrunning the fullback.

He has to backtrack and then receives the long pass stationary. 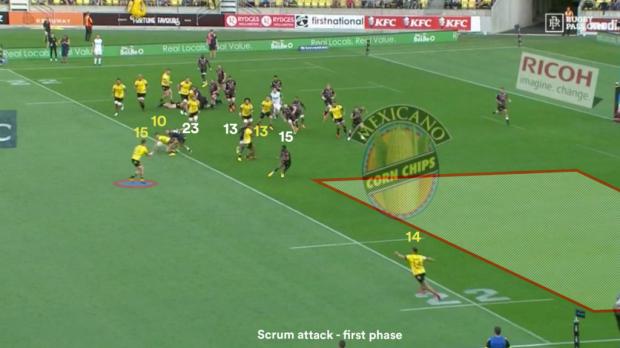 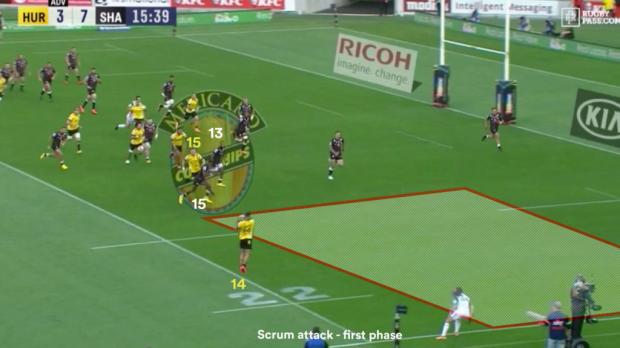 The space is still there to eat up metres, but the timing isn’t there to score.

If he had timed his run off Jordie Barrett instead of Garden-Bachop he may have scored in the corner.

The third time they run another variation. They get everything right and Goosen goes over untouched in the corner.

Adding extra depth to the play and letting the rush defence undo itself has become all the rage in 2020 Super Rugby.

The Chiefs had the Crusaders left clutching air on this set play in Hamilton, letting the rush come through but never getting close.

The Chiefs only use their top ball-players, with 9-10-15 getting touches to get around the defence. The Crusaders can’t even lay a finger on them as Tahuriorangi, Cruden and McKenzie combine to put Alaimalo over. McKenzie bounces outside Reece and draws in a frozen Will Jordan with the final pass.

It is the exact same play used by the Hurricanes earlier against the Sharks where Goosen overrun the play, but the Chiefs spread it out over much more width.

They add about 15-metres of depth but the timing of each run is perfect, with each man hitting the ball in stride.

It’s not just the depth that does it, it’s also hitting the ball at speed.

In 2019, the All Blacks had trouble getting the ball wide on the first phase against the Springboks.

While the Sharks moved him infield against the Hurricanes to cover Laumape, when Lukhanyo Am is at centre for the Springboks it is a different story. He has great closing speed and consistently makes good reads.

The All Blacks backline were so flat they weren’t able to break it to the edge with Am being the roadblock at the World Cup in the pool match.

This ‘miss one’ pass from Richie Mo’unga (10) to Anton Lienert-Brown (13) with Sevu Reece (14) looping around the corner is a variation of the play later used against Ireland in the quarterfinal. 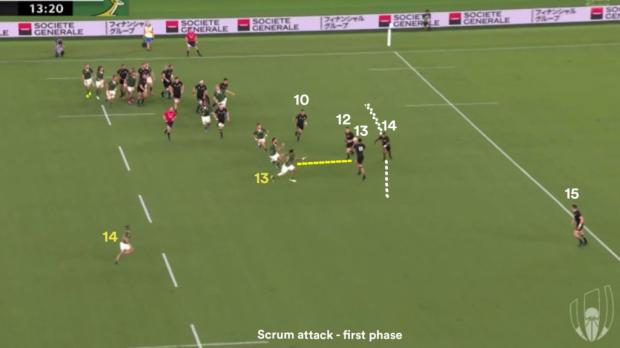 The space to the outside is vast with Cheslin Kolbe (14) coming down from kick coverage.

The problem is Am (13) closes so fast on Lienert-Brown he doesn’t have the time to pivot and provide the pop pass to Reece. 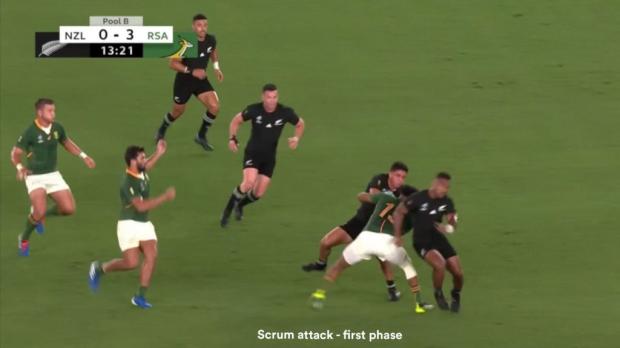 Lienert-Brown is swarmed high by Am preventing the ball from getting away.

The flat style of play is synonymous with Canterbury and the Crusaders.

Their high tempo pace tires out domestic and Super Rugby sides quickly, allowing them to play at such close proximity to the defence.

The Springboks were a highly conditioned side so it may have made sense to change things a little bit, particularly on set-piece wide plays and add a bit more depth.

Of the teams in Super Rugby who the Crusaders had the most trouble against in 2019, it was the Sharks who gave them the toughest match at home, forcing numerous turnovers and errors in a 21-all draw in Christchurch.

Unsurprisingly, the Sharks had Springbok pair Lukhanyo Am at centre and Makazole Mapimpi on the left-wing blitzing in regularly that night to close down play.

Anton-Lienert Brown and Jack Goodhue are going to be staples of the All Black midfield for some time, but another Crusader offers something a little different.

22-year old Braydon Ennor brings dynamic speed into the equation that may help counter Am.

Whether as an impact player off the bench or starter, Ennor in the midfield rotation with Lienert-Brown, Goodhue and Laumape allows for a diverse mix of skillsets.

Ennor has shown over his first few seasons of Super Rugby that when given space he can reach top speed very quickly.

This play run by the Crusaders against the Lions that set Ennor free is almost the same as one used by the All Blacks against the Springboks in the 2019 Rugby Championship, with Ben Smith playing the role that Sevu Reece did above.

The All Blacks create an opportunity on the outside but it isn’t capitalised on. 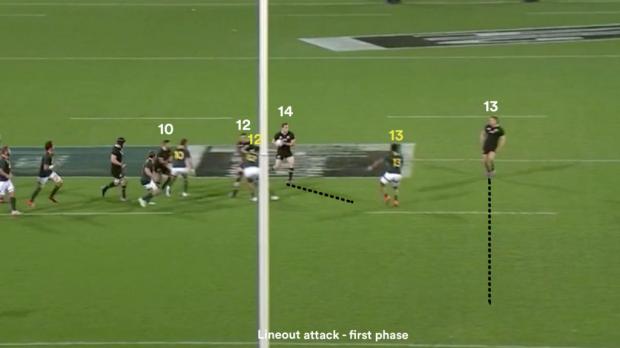 De Allende (12) takes Williams, leaving Am to take both Smith and Goodhue. Am decides to collapse in on Smith, meaning his outside help, Cheslin Kolbe (14), has to also bite in on Goodhue. He isn’t able to beat Kolbe or get the ball to one of the fastest men on the field. They puncture outside Am but don’t make the most of the opportunity to rip off a big break or more. While the Springbok defence is much tougher than the Lions, if the All Blacks had an option to use at 13 with top line speed, it could make their wider attack more potent.

The Crusaders have already gone this way, preferring Goodhue at 12 and Ennor at 13 all through 2020.

With quick acceleration and powerful strides, Ennor on the outside break could cause problems if some space is schemed for him.

The Springboks, and any team for that matter, are vulnerable when jamming in hard to prevent the ball getting to the edge.

The risk increases they won’t get there in time to shut the ball down with well-timed deep passing and running.

The All Blacks have no shortage of young backs to build such an attack, with the likes of Jordie Barrett and Braydon Ennor bringing ideal skills.

Jordie Barrett’s goal-kicking is a secondary factor that adds weight to him starting at 15. He’s always been the long-range sniper for the Hurricanes, but since taking over the tee full-time his strike rate has increased from 69% to 81% this season.

Damian McKenzie is back from injury and shapes to be a key figure. His best All Black-years are ahead of him, either at 10 or 15. Beauden Barrett is in his prime with a long-term commitment to NZR, along with Richie Mo’unga.

David Havili was one of the form Super Rugby players before the season was cut short, while there is no doubt that his teammate Will Jordan will wear black sooner than later.

Havili is versatile across any backline position, making him ideal to fill a super-sub role, while Jordan’s speed and agile-running at fullback makes him a prototype fullback-slash-right wing option that was filled by Ben Smith and Cory Jane.

Ennor in rotation with Goodhue, Lienert-Brown and Ngani Laumape offers four midfielders where power can be combined with speed, skill, or guile.

The reality is at the international level you need more and more flexibility within a squad to configure matchups with what you think best suits the opponent, which is why all of these young players will be crucial to the All Blacks over the coming seasons, but Braydon Ennor and Jordie Barrett could be key to igniting a set-piece attack.