Analysis: Dissecting the All Blacks game plan – their Springboks blueprint was on the money

Gallagher Premiership Fantasy League Next
Back
The Rugby Championship

Analysis: Dissecting the All Blacks game plan – their Springboks blueprint was on the money

With 75 percent possession and 79 percent territory the All Blacks could not come away with a win after a mammoth defensive effort by the Springboks. However, with such a huge amount of possession we were able to see a lot of All Blacks attack and able to gain insights into how they thought they should break down the Springboks.

There were many things the All Blacks did that proved to be successful that they will no doubt try again in Pretoria. The maul lineout drive from close range proved effective, as well as specific switch plays that targeted the Springboks biggest weakness – spreading numbers effectively across the defensive line.

The Springboks seem to be the most vulnerable re-loading after a set-piece. They don’t spread numbers efficiently on both sides of midfield rucks, often leaving front rowers all together to cover one half of the field and the absence of a sweeper system means they drop back three backs as a second line defence.

The All Blacks first two tries came from a second-phase play after a simple midfield crash, setting up the ‘axis’ to either play the same way or swing play back.

If they achieved a 2-second ruck, the All Blacks could exploit the mismatches they wanted as the Springboks scrambled to bring players around the corner. 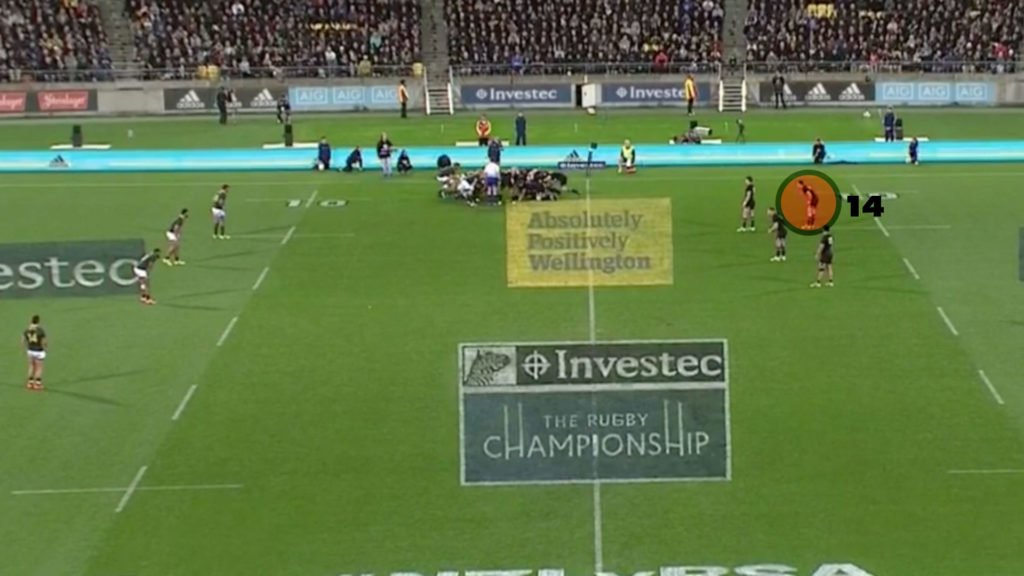 This first phase set-up has Ben Smith (14) off his wing, lurking in behind Barrett at first receiver for the set-piece play.

Smith runs his line as part of the simple crash play, but once the tackle is in the process of being made, he makes a beeline back out to his wing for a second-phase strike, setting up behind Codie Taylor. 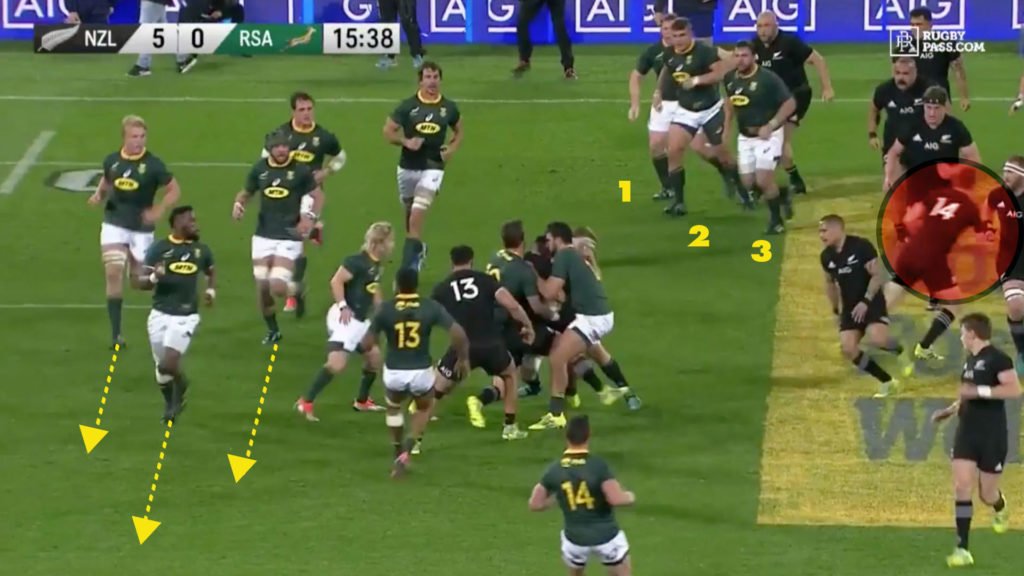 The Springboks send all of their loosies around the corner, leaving their front row behind to set the short side defence.

Aaron Smith fires a long cutout to Codie Taylor who plays Smith on the outside with a no-look pop pass. Taylor fixes the last man on the edge, prop Steven Kitsoff (1), leaving a 5-metre lane for Smith to skin the Boks. Aaron Smith ends up with the spoils with an inside support pass from Ben Smith. 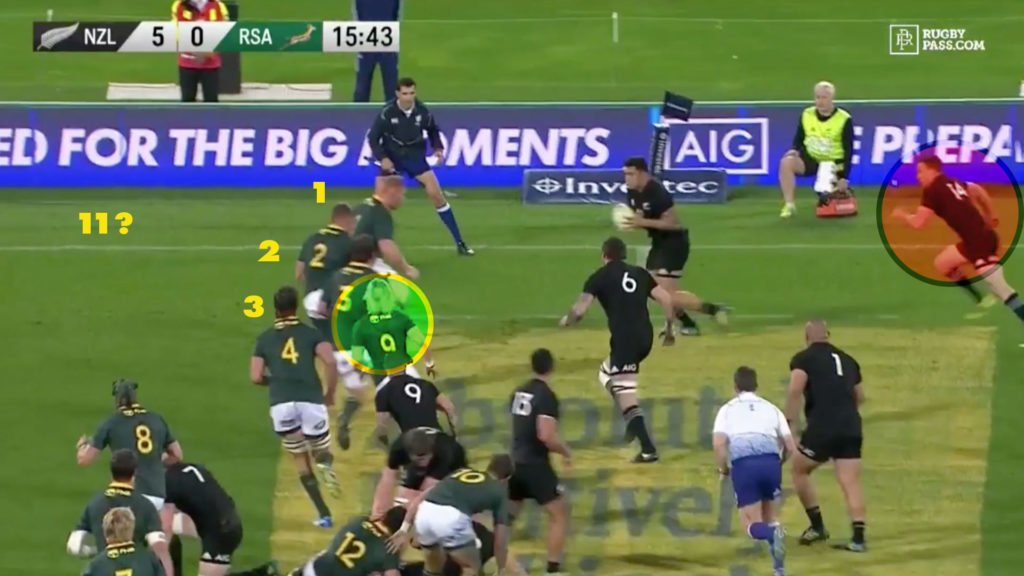 The All Blacks created the mismatch against the front rowers but young winger Aphiwe Dyantyi (11) also plays a massive part. He is back in kick coverage and doesn’t move up to close down the play leaving the channel open.

He really shouldn’t be back there in this area of the field, but this is the Springboks defence system.

The wingers deliberately drop back as the second line of defence because their halfback, Faf de Klerk (9), doesn’t perform a ‘sweeper’ role. We can see him above circled in the front line. This is another fascinating part of the Springboks defence altogether (which we will also break down), but de Klerk is often in the front line leaving the wingers to cover chips, grubbers or half-breaks. 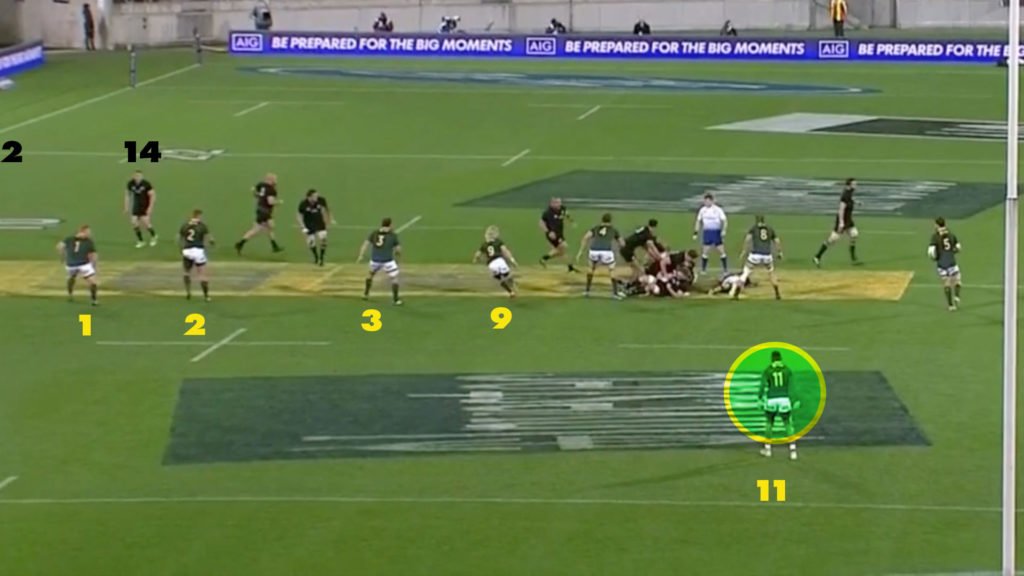 From the high shot, we see Dyantyi is not anticipating the possibility of a short-side play and is too deep and too stationary to do anything about it. Once Smith breaks away down the sideline he is left stranded as the last defender.

The All Blacks run the exact same play about 10 minutes later on the other side of the field but this time it is the All Blacks number 11 who is out of position and Jesse Kriel (14) anticipates the play perfectly and shuts it down.

After the first phase scrum play, we see the front row isolated on the short side with no help. 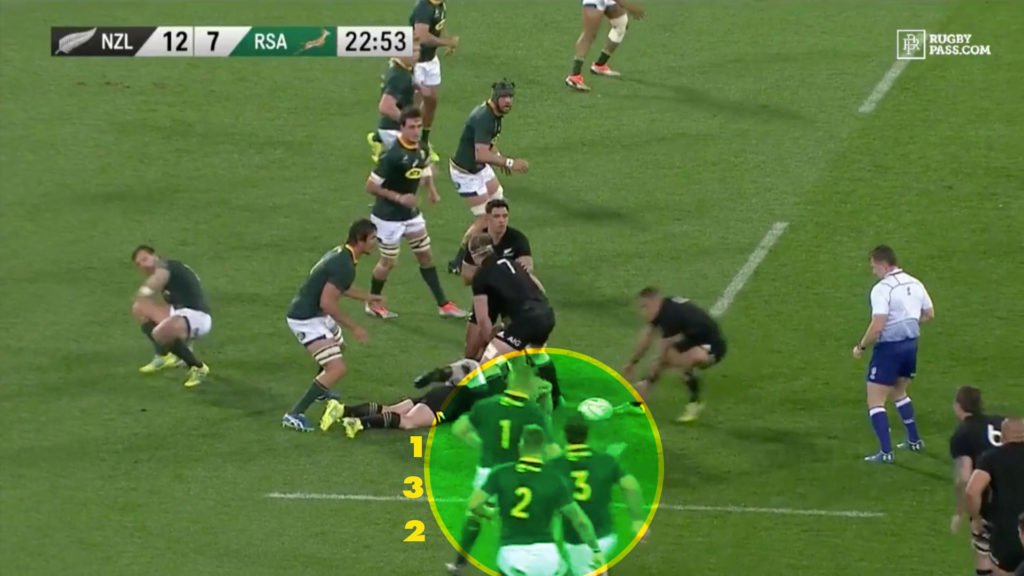 This time Rieko Ioane is nowhere to be seen, leaving Taylor without the ‘pop’ option whilst Kriel (14) has read the play and closes the space by making a great read. Ioane comes to the party late missing the opportunity, however, Kriel’s awareness would have made it much more difficult this time around. 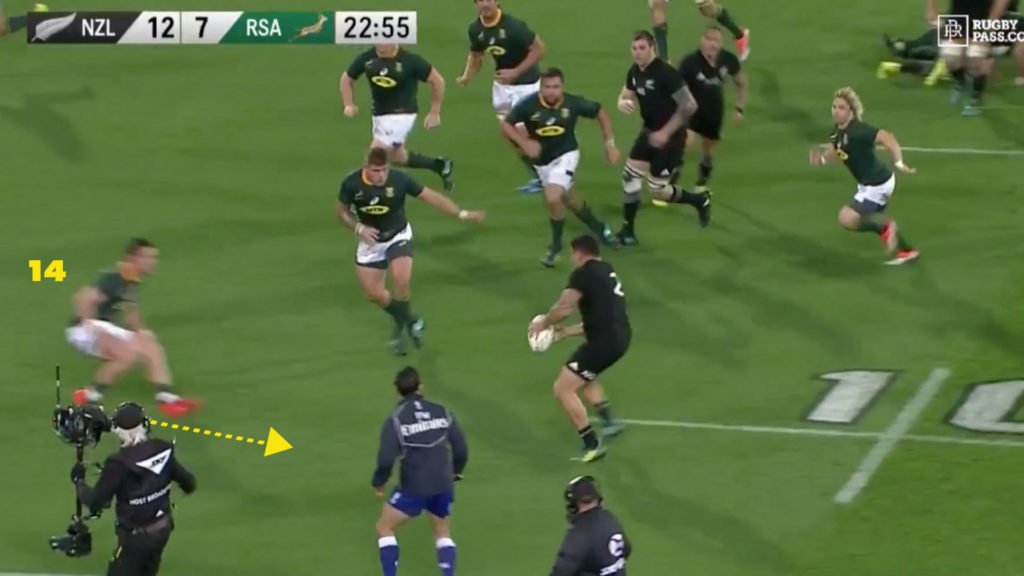 From the high angle, we see the brilliant defensive work of Jesse Kriel, stalking the play and getting into a position where he can close it down. When Aaron Smith fires the ball back, he rushes up and closes down the space having anticipated the short side raid, which was an inverse of the exact same play.

This was one example of the type of switch plays the All Blacks used to target the Springboks off scrums. In the second half, they used a complex ‘tack’ play, switching the point of attack after a lineout.

With dynamo Damian McKenzie on the field at fullback in combination with Beauden Barrett, the All Blacks had two speedsters available to run a wide ‘tack’ play, with both players able to cover a large distance at a decent clip to swing play back.

They would run the switch on the third phase, playing a standard crash play from the lineout, followed by one pod around the corner before ‘tacking’ back to a big open side. 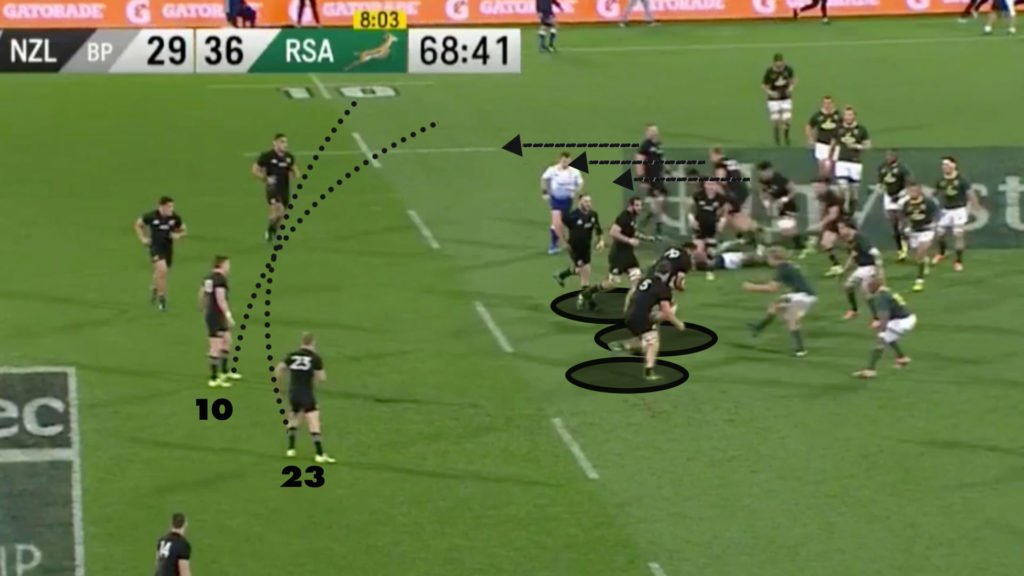 Here during the second phase, the pod of three is taking a carry after coming around the corner, whilst the players involved in the first phase crash are re-loading and will be integral to the third phase strike.

Barrett (10) and McKenzie (23) are still wide right, as if the play will come the same way to the right again, enticing more Springboks to come over. As the breakdown develops they will both run wide sweeping lines back to the left and play a double screen off Ardie Savea at first receiver, utilising their speed to create a numbers advantage.

Ardie Savea (20) takes it to the line with Kieran Read (8) short and Barrett (10) as the backdoor option on the first screen. 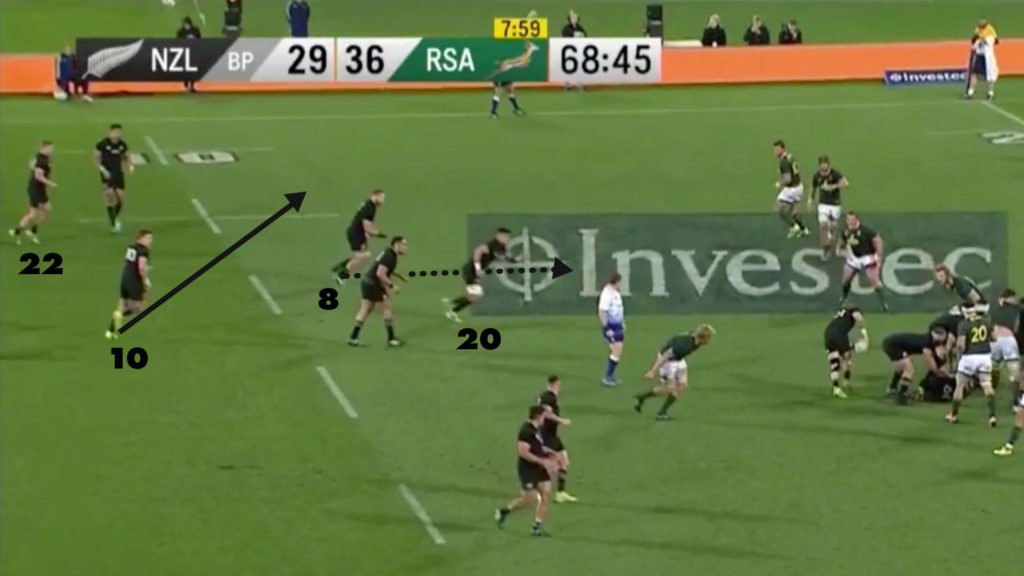 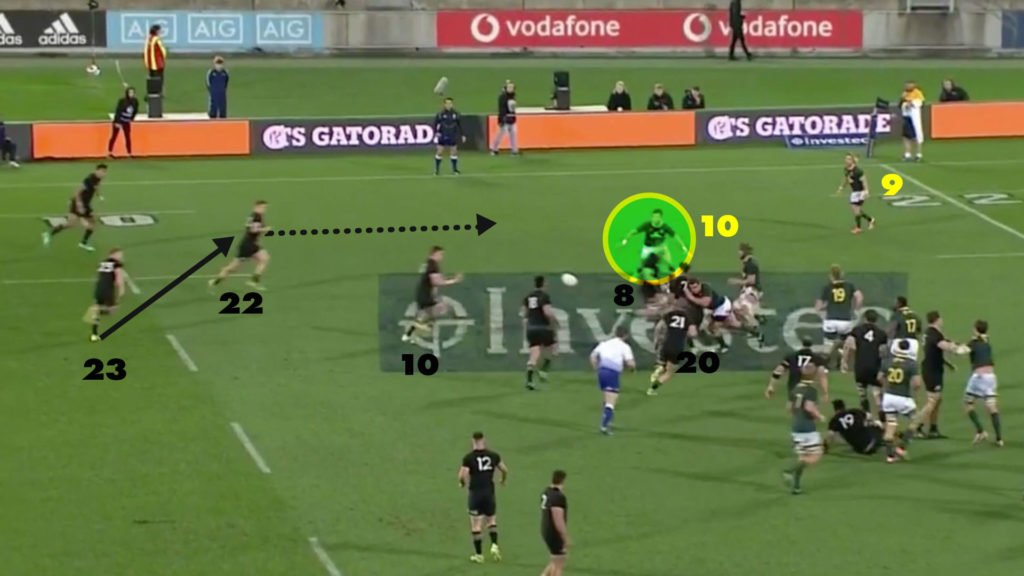 McKenzie is just brought down short of the line in another inspirational cover tackle from Warren Whiteley. From the front-on angle we see that McKenzie ends up running Ioane out of room, moving a bit too laterally allowing the Springboks defence to slide.

The All Blacks still created a scoring opportunity but had Barrett taken the short option of Goodhue, they may have been able to hold the defence longer to keep Ioane’s lane open. Given Ioane’s lethal finishing ability, even a late pass from McKenzie may have been enough for Ioane to work his tightrope magic.

After the Springboks clearing kick, they run the exact same three-phase ‘tack’ play again, with only a slightly different crash play on the first phase.

With the knowledge learned previously, Barrett hits Goodhue short this time but the Springboks do a better job of distributing numbers in the defensive line to stop the play.

The All Blacks switch plays continually found space in this game, opening up the Springboks defence with designed plays targeting the re-loading set piece off both scrum and lineout. In the first half, the All Blacks built a 12-0 lead of two second-phase strikes.

When they moved away from this and tried to use Barrett’s cross-field kicking late in the first half, they lost a bit of control and allowed the Springboks back into the match. One of the kicks that sailed out on the full gave back possession to the Springboks just outside the 22 that led to the Marx try.

For the Springboks, how they manage their alignment will be integral to stopping the All Blacks in Pretoria. They must not leave their most immobile forwards isolated on the edge or they can expect more traffic that way, while the All Blacks will again be looking for these opportunities and should persist if they find it is working again.

The All Blacks blueprint for this game was on the money they just weren’t able to cash in enough when the opportunities presented.