Analysis: Did the All Blacks ‘bottle it’ and shadow-box against Ireland?

After a review at the ‘macro’ factors surrounding the All Blacks try-scoring troubles abroad this November, a review of the ‘micro’ details of the Dublin test reveals a very uncharacteristic All Blacks game.

Aside from the execution errors, the decisions and game strategy executed by the players was very foreign, unlike anything we have seen for them this year.

“We are still stuck between the old way, and the new way, and we haven’t got it right yet,” explained Hansen after the 16-9 defeat.

There are many aspects of this All Blacks performance that just don’t add up on the face of it. The deeper you dive, the more suspect it becomes.

The first observation being the forward pack, the tight five in particular, looked like they had played a game already before stepping onto the pitch. 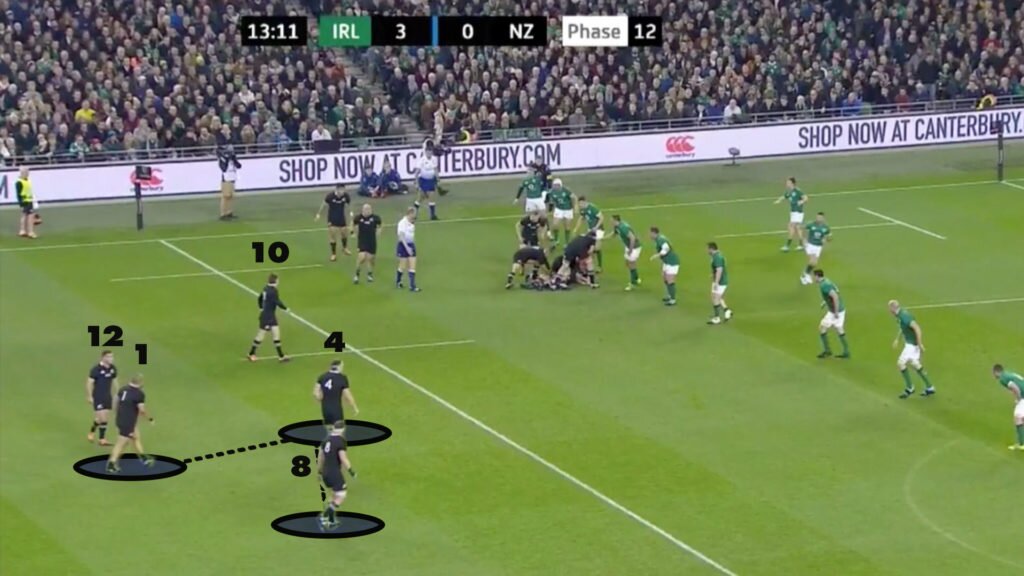 This performance had some of the poorest transitions into shape you will see from an All Blacks side, almost right from the start, with many of the tight five failing to retreat on kicks, and set up adequately with the pod ball carrier, dropping three-man pods down to two like flies, getting into position late and disrupting the flow during phase play. 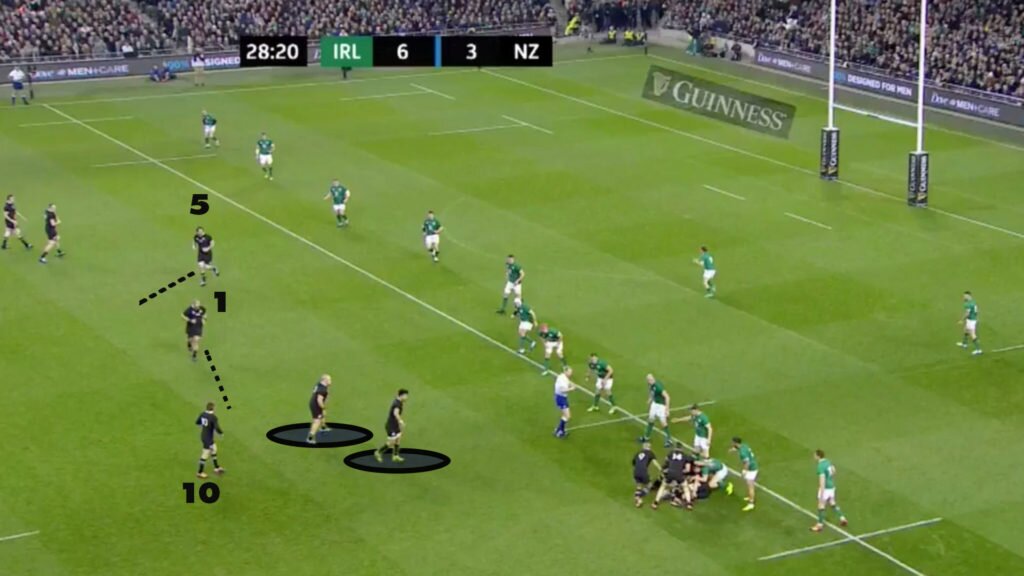 It was like the forwards had run a marathon before the game, or were carrying significant injuries, with many walking around the field during play.

We know the main All Blacks squad skipped the Japan test to head to the UK a week early. Did they get flogged with pre-season conditioning for two weeks in order to be able to simulate fatigue during late-World Cup knockout games, turning these two massive games into a semi-final and final trial run?

With this tour being the only chance to play the top Northern Hemisphere sides before the World Cup, it wouldn’t be out of the question to turn this trip into a World Cup dress rehearsal and experiment with such an exercise.

It is also plausible the team could have just hit a wall with late-season fatigue, but with the quality of personnel on the field, it’s hard to fathom that they would be gassed after just ten minutes.

It was clear that something just wasn’t right and it only got worse throughout the match.

The All Blacks opened the game with a territorial kicking back and forth, before winning an attacking opportunity inside Ireland’s 22 inside the first three minutes.

It would be the first and last time in the match they would breach Ireland’s five-metre line. The Irish defence soaked up 12 phases, mainly of one-out forward carriers, before Read became isolated and Josh van der Flier and CJ Stander were on him like magnets.

It was odd in two ways, the approach was forward-dominate and conservative in an attempt to bully their way over but it also began to fall apart quite quickly despite being early in the match.

They played one-out rugby in tight quarters but lost shape in this early attacking raid, players were over-committing to rucks and they were churning through carriers. It looked like the 84th minute, not the 4th minute. 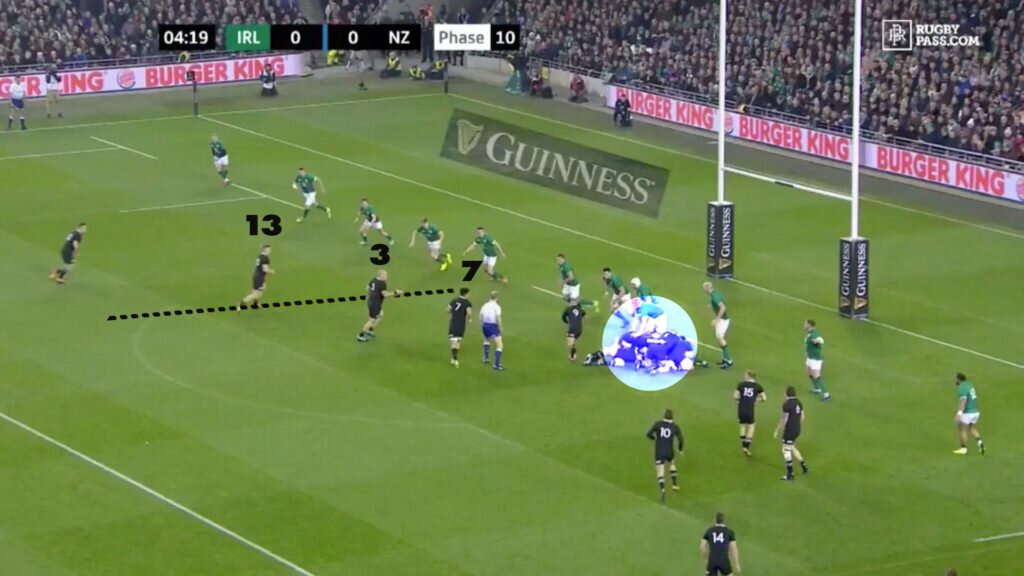 By phase 10 Owen Franks (3) is left with only Ardie Savea (7) inside. Jack Goodhue (13) offers an unders line outside him and back-up cleaning support. Four All Blacks are on the ground in a heap at the last ruck.

Franks takes the carry and is joined by Savea, Goodhue and even Ryan Crotty as cleaners, using another four players at the breakdown. 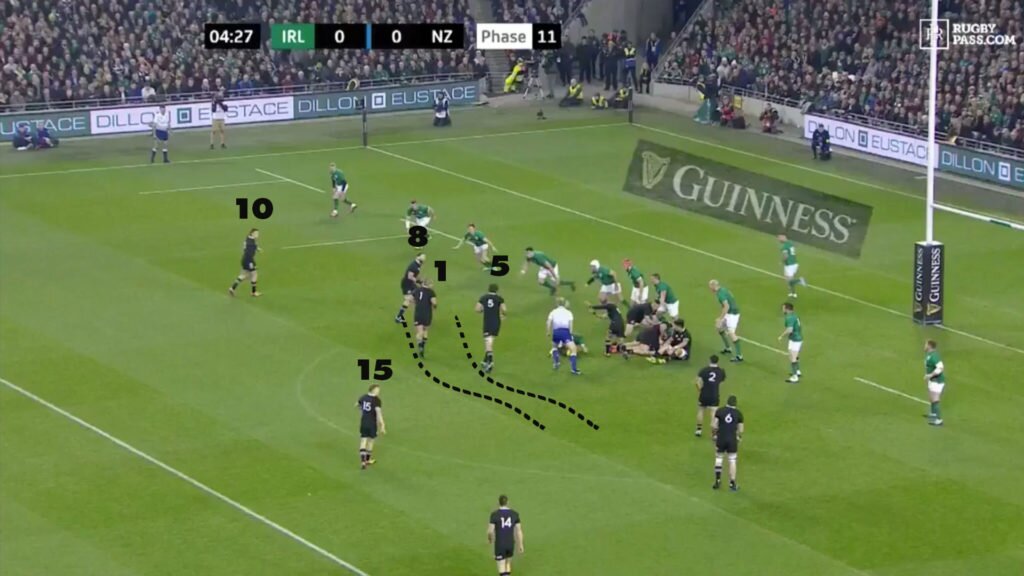 The previous ruck comes around the corner for the next carry, with Kieran Read (8) setting up first and Karl Tuinukuafe (1) and Sam Whitelock (5) struggling to make it around in support. The pass has already been delivered and both aren’t in ideal position yet. 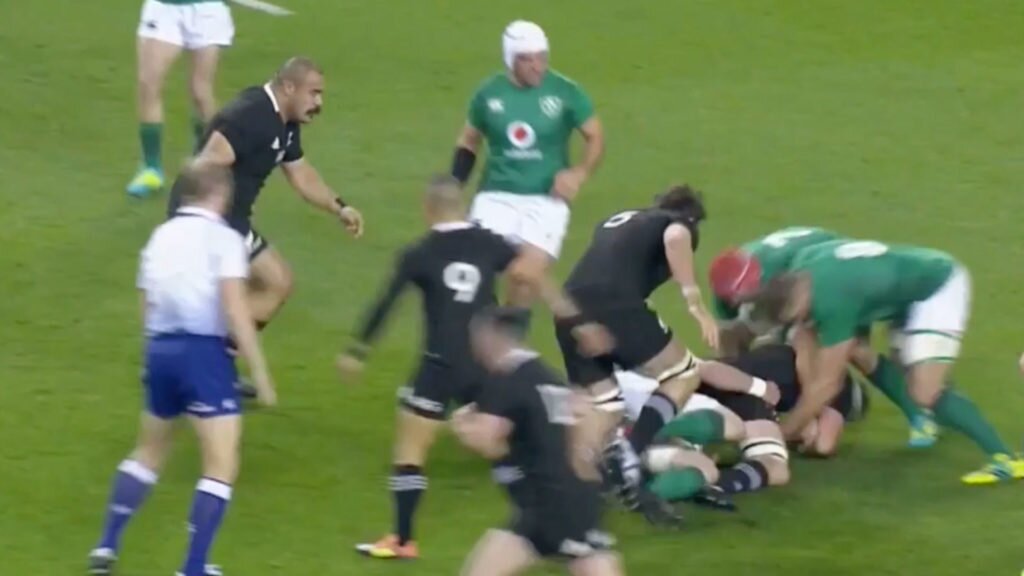 Read is tackled and the Irish loose forward duo of van der Flier and Stander are quick to target the isolated runner, finding strong position over the ball and winning a penalty for holding on.

Aside from the concerning lack of energy, the tactics are worth pointing out.

Just one week after beating the English at their own game at Twickenham, is it a possibility that they tried to do the same thing against Ireland and shelve their normal game plan?

Further abnormal behaviour from this side was the distinct lack of ball-movement from the forwards, in favour of one-dimensional carries. This was at times, a necessity given the inability to set-up correctly. 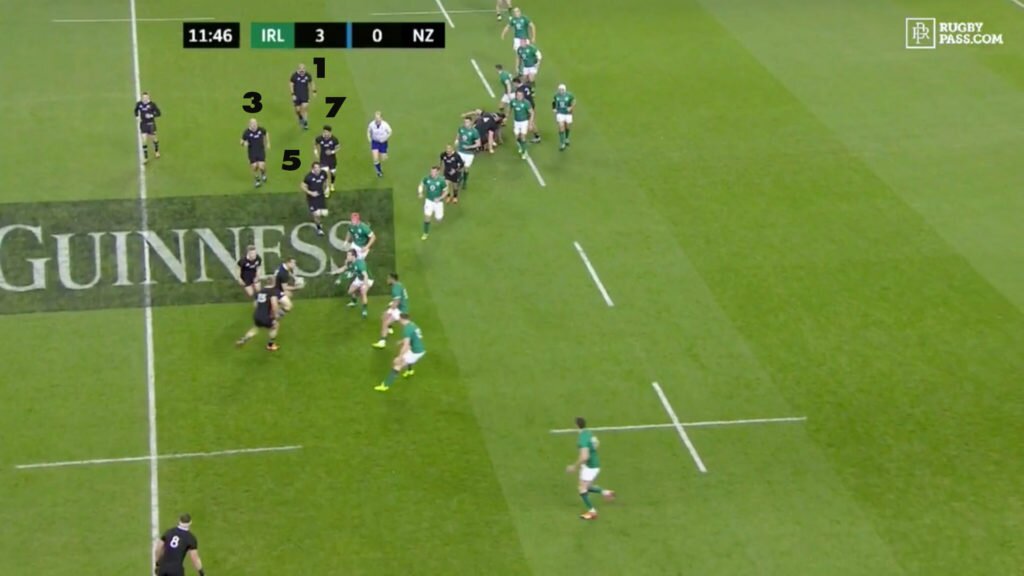 Here in the 12th minute in the early stages of the contest, the All Blacks spread to the right edge and we see a group of forwards, half of them walking, to set up the next carry back. 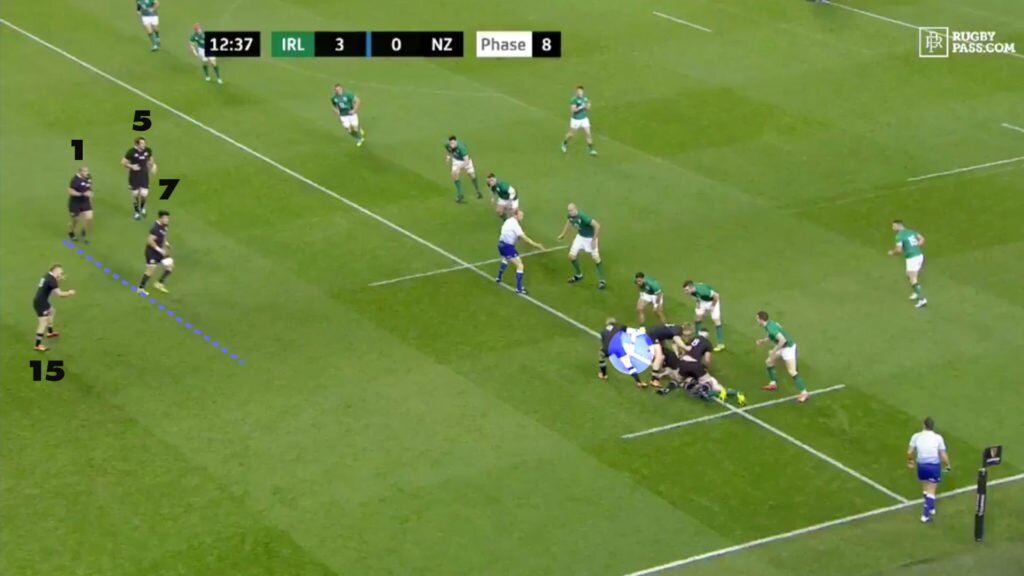 Aaron Smith has the pass loaded and only Ardie Savea is in position, with Whitelock in front of him and Tuinukuafe also on his left side. 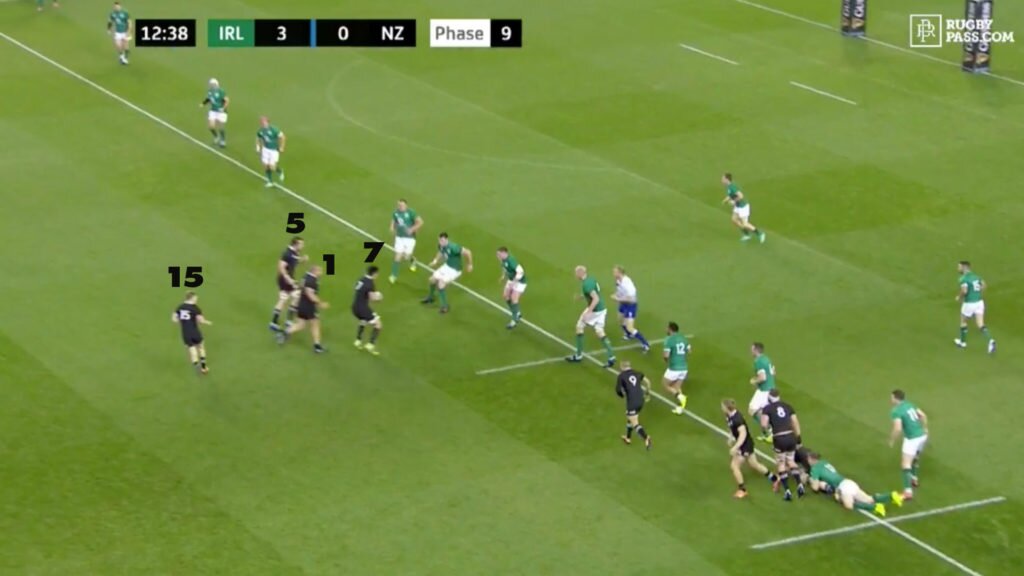 As the play develops the spacing is a mess, and costs the side an opportunity to use McKenzie out the back. One Irish defender bites in on Whitelock leaving a massive gap between the next man Josh van der Flier. 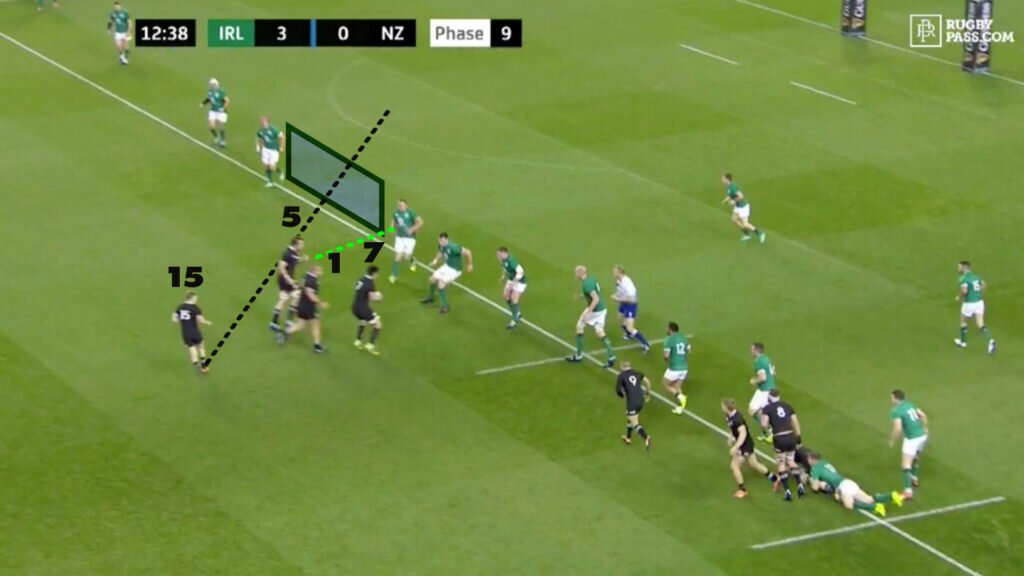 The All Blacks are not prepared for, and not interested in, using a swivel pass and releasing McKenzie for this opportunity. 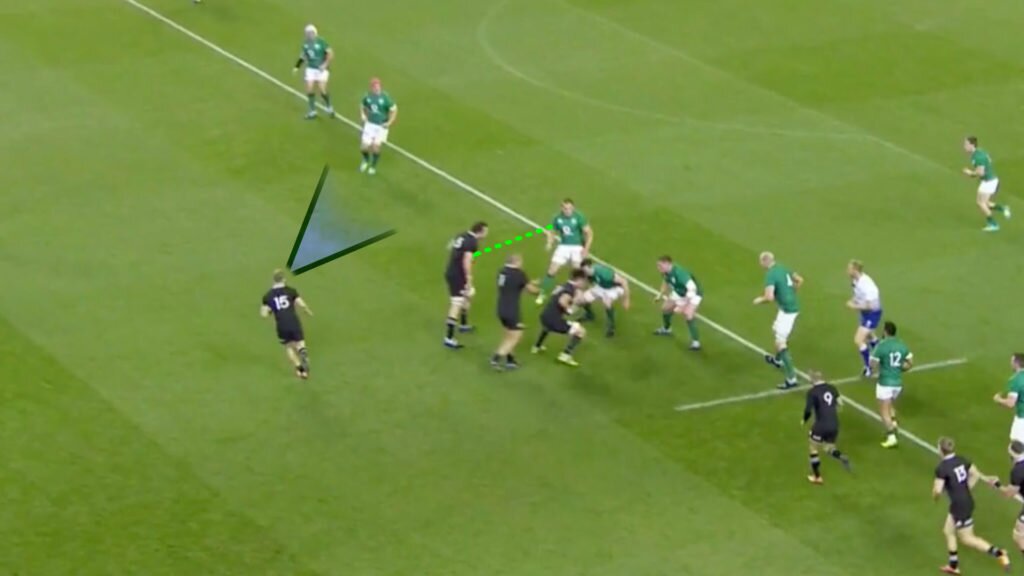 This carry-first approach was apparent throughout the whole game, evident in some telling statistics.

The forward pack, bench or starting, had zero offloads, just one tip pass and used the backdoor pass just four times from a possible 29 situations in the game. That’s only 13 percent of the time they moved the ball once the target received the ball off 9.

As a comparison, during the third test against France in one of the most clinical performances of the year, Damian McKenzie got the ball 60 percent of the time he lined up in the diamond. 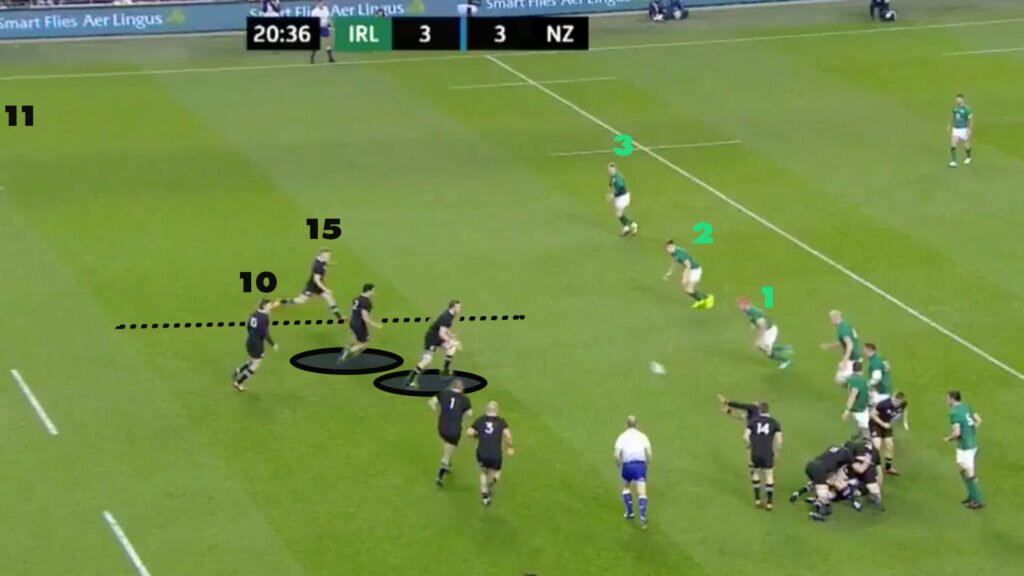 From the minimal set-piece platforms they had, it’s not apparent what they were working for.

They often worked the same way with multiple carries and succeeded in creating short numbers in the Ireland defence, but didn’t use them. Above on the third phase the same way after a scrum, the halfback’s pass has released with only three defenders covering outside Squire.

Damian McKenzie (15) is looking for an unders line off 9 outside the two forwards, over commits and has to back-pedal.

With Garry Ringrose biting down, if Squire is able to play Barrett out the back the All Blacks would have an opportunity down the left edge with Rieko Ioane out of shot, even with McKenzie having to recover. 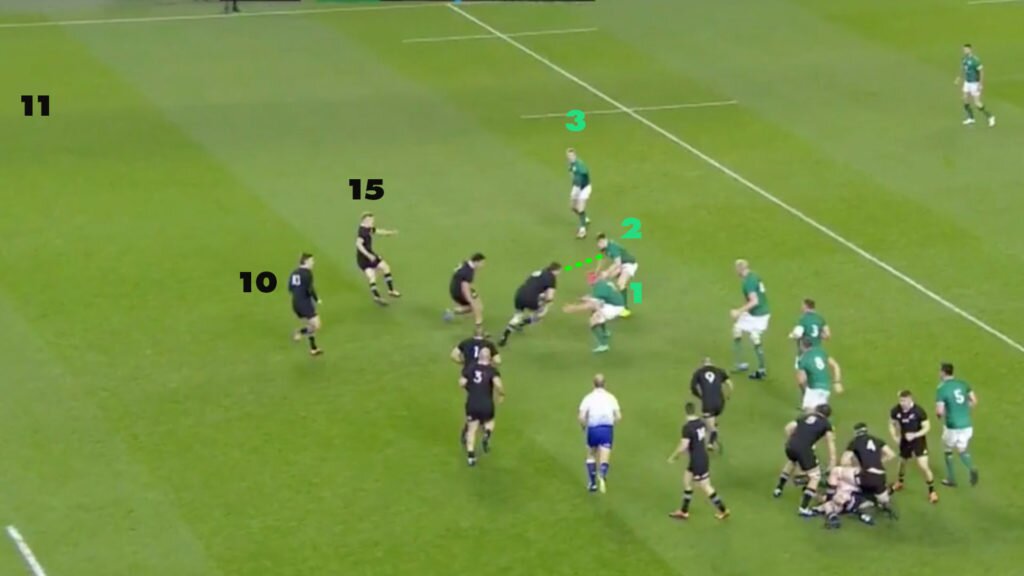 Squire is intent on playing the pre-programmed carry in the movement, with eyes only for contact despite drawing two defenders.

On the next phase, Barrett tries the first of four grubber kicks used in this area of the field during the match, all four which were cleaned up and recovered by Ireland.

Another carry by Squire late in the first half has McKenzie wrapping around the outside with an overlap developing, but the ball dies again in the tackle. 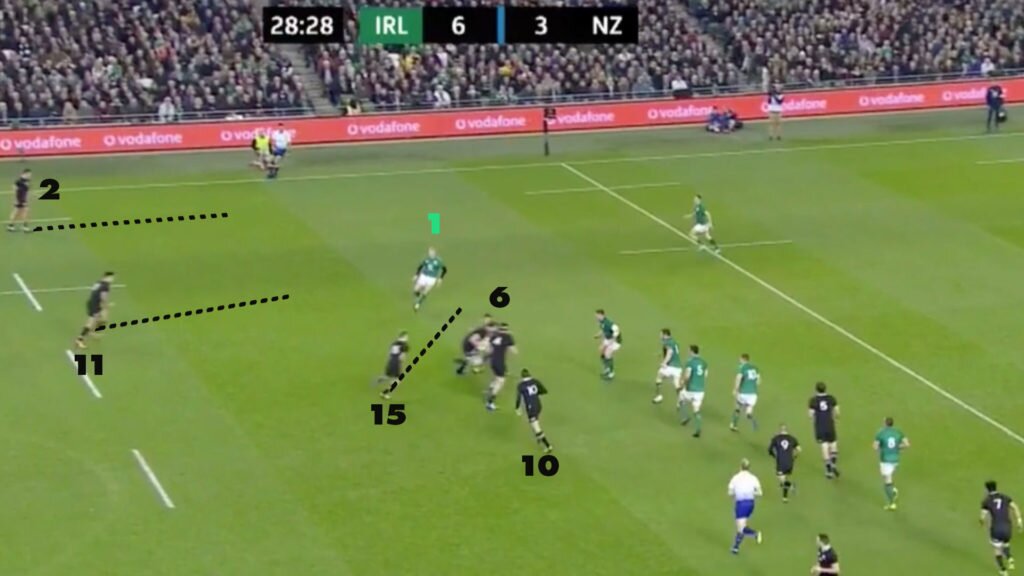 Even in the transition game, with limited turnovers the All Blacks usual ‘two-pass’ approach and intent of pushing to the edge was absent.

With Ardie Savea (7) winning a loose ball on Ireland’s scrum early in the second half, he breaks to the open side with a full back line but opts to carry with acres of space available on the edge. On his next turnover opportunity, he uses a kick through that resulted in a 22 restart. 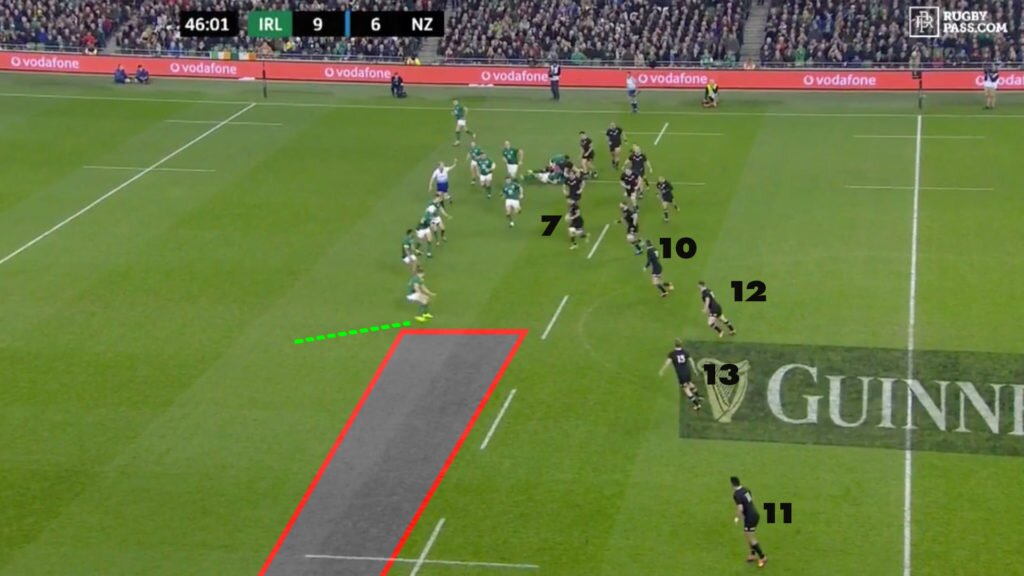 There was a distinct lack of intent to move the ball in situations the All Blacks usually thrive in. At times it was due to a lack organisation before the play, which looked to be the result of fatigue.

The decision-making and game plan was night and day from their last test against the Wallabies in Yokohama. As good as Ireland’s defence and line speed is, the decisions and game strategy are two controllables that are determined by the All Blacks, not pressure from the opposition.

Did they shadow-box this game to stop Ireland getting familiar with them? Did they deliberately exhaust their players in the preparation as part of a bigger plan? The performance on attack was so far off what you normally get from this side that suspicions start to formulate, especially when world-class players struggle to align consistently and hold onto the ball.

As much as a conspiracy theory as it sounds, the All Blacks received Board-level approval from the NZR to play a second string side in Japan. There has to be a reason for that. Is a pre-World Cup simulation exercise, that involved putting the players under exhaustion, out of the realms of possibility? Or did they just hit a massive, end-of-season wall?

They didn’t play like their normal selves, in more ways than one. It’s probably time to give them an off-season to recover.

Analysis: Did the All Blacks ‘bottle it’ and shadow-box against Ireland?

Thomas: Mental scars will stay Next