9:43pm, 22 September 2021 Go to comments
If you enjoy this breakdown, head to theXV.rugby to find plenty more analysis on the international game from some of rugby’s top writers.

The Springboks played with more width in their second loss to the Wallabies in Brisbane, and much of the post-match talk from their camp has been about how they played too much attacking rugby.

Whilst they did not get much reward from their endeavours out into the 15-metre tramlines, and the Wallabies were up to it defensively, it wasn’t a total catastrophe. They didn’t concede tries against the run of play and just found the Wallabies defence tough to crack.

Who was the All Blacks top performer in the second Pumas test?

Who was the All Blacks top performer in the second Pumas test?

Of more importance is the defensive issues that have plagued the Springboks over the last two weeks, which have been flashing up since the Lions tour.

It is actually on the defensive side where the main problems exist, and even with a reversion to their ‘DNA’ game plan, the rot won’t stop unless they are able to iron out these issues.

It must be said that the Springboks desperately miss Pieter-Steph du Toit on the flank, the World Player of the Year in 2019, whose machine-like work rate and athleticism has not been replaced in the back row.

Franco Mostert was a standout performer in the Lions’ series, but he is not the same type of loose forward as Du Toit. The lock missed four straight up tackles in Brisbane playing on the blindside flank. Despite making 10 tackles, the 71 percent completion rate is below what the more dynamic Du Toit would bring.

Moving Mostert to the loose forwards has tested the depth at lock and forced the Springboks to call on of their back-ups more, especially with RG Snyman out through injury.

Lood de Jager was the culprit in an ineffective performance missing five tackles in the first loss to the Wallabies on the Gold Coast. Concussion protocols forced him out for the second, bringing in Marvin Orie, a fifth-choice lock to the starting side.

There is no doubt the hole left by Du Toit has been hard to plug, his presence has been sorely missed leading to the leakage in what was previously a watertight defence.

Missing Cheslin Kolbe has also been a decisive loss, as his execution of the edge defender role has not been replicated by Sbu Nkosi. The reads required of the Springboks wingers are extreme and losing Kolbe severely reduces the effectiveness of what they trying to do.

On the Wallabies first try, Len Ikitau simply ghosted through flyhalf Handre Pollard and lock Orie on the way over on a third phase playing the same direction. On his second try, systemic problems for the Springboks’ defence start to show.

From a defensive lineout, the Springboks usually have a 4-1 backline split on either side of the first ruck. Faf de Klerk is left as the one back on the backside of the ruck as the edge defender towards the touchline where the lineout started.

The rest of the backs patrol the openside until play maps across enough for a re-load to occur.

On the set-piece launch leading to Ikitau’s second try, De Klerk is in the sin bin, complicating issues. The Springboks don’t have their backside edge defender.

The Wallabies bungle the maul and end up behind the 8-ball, before Samu Kerevi carries on the first phase to settle down play but for a negative gain-line loss.

Damian de Allende (12) tackles Kerevi and Lukhanyo Am (13) decides to compete and gets cleaned out. Both Springboks midfielders end up on the ground. 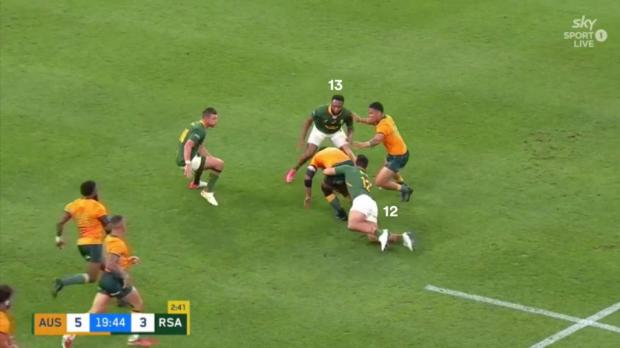 Pollard (10) knows both midfielders are now out of play on the openside so pushed out to where only Makazole Mapimpi (11) and Willie Le Roux (15) are stationed.

Am’s decision to compete at the breakdown was a big risk in the circumstances. If he wins the contest, he saves his side. If he loses, the Springboks are really short on the openside as they are already down a man. He went for the steal and it didn’t work out.

On the next phase De Allende (12) has to make a second straight tackle while Am (13) reloads to the backside where De Klerk is absent. 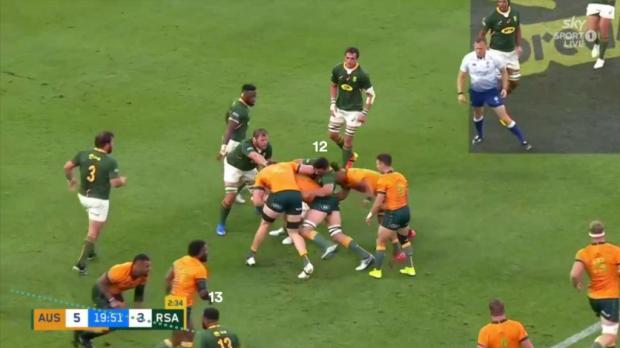 After his tackle, De Allende joins Am on the backside but the Wallabies keep working the same way in their attack launch pattern where the two midfielders have now desserted.

On the next phase, powerhouse prop Taniela Tupou runs onto a perfect tip pass to get a match-up one-on-one with Pollard (10), who unsurprisingly has no answer for the front-rower. Tupou is brought down near the five and the Springboks defence is under pressure to recover. Missed first-up tackles hurt, but there is no awareness or proactive decision-making to regroup from the Springboks.

Mapimpi (11) works hard to get back in case he is needed to tackle Tupou, but then loiters around the ruck as if there is no urgent need to get back to the edge where his side was already short. The midfielders are happy to stay on the backside and overall, there is a lack of awareness with what the Wallabies are doing. Every forward has their eyes on the breakdown, unaware of the huge openside set-up.

Pollard (10), who missed the tackle on Tupou the phase before, understood the threat and worked back to get out on the edge but he is not the guy that needs to be defending two-in.

They really need Am and a wing who can rush and funnel play back inside, who would usually be there in this situation when the opposition keeps working the same way.

For the Wallabies, it’s showtime as the entire backline is stacked waiting to run the strike play on the fourth phase to the right. There is not an Australian soul out to the left side of the ruck. Quade Cooper (10) knows it’s on and they want to get the ball quickly past the interior ruck defenders to where Pollard and Le Roux are outnumbered.

The Wallabies run a simple screen play with a trailing inside runner, Marika Koroibete (11), for an out-ball, in-ball play. Kerevi runs underneath Pollard drawing his interest while Cooper’s target Tom Banks (15) is out the back. Pollard slips over trying to cover multiple threats and it’s game over as Koroibete bursts through a half-gap on the inside ball from Banks and he releases an offload to the two support players free outside him. 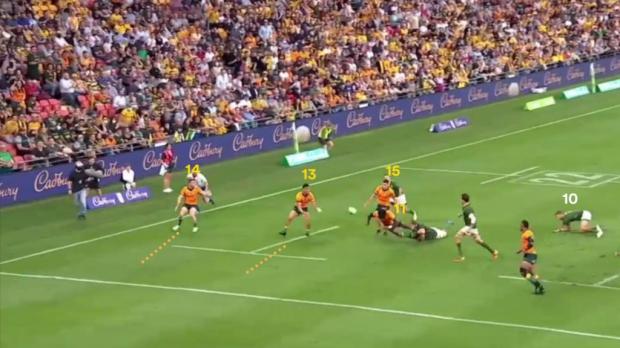 A number of Springbok players are up in arms about a potential forward pass, but they were dead in the water regardless as their defensive system completely broke down leaving Pollard out to dry.

They were down to 14 men so could be excused for letting a try in but the lack of resistance and the overall process of how the play unfolded could be seen as a warning sign.

First and foremost, Faf de Klerk not being on the field is the biggest issue after being yellow-carded for silly play. Aside from the slap down, deliberately slowing down the play with hands in the ruck while the opposition has a penalty advantage is a recipe for a professional foul call.

The second is it looks like no one understood the protocol for who stations the backside with their scrumhalf off the pitch, with both midfielders resetting that way. The third issue is there’s just no urgency or heads-up awareness as to what the Wallabies were planning to do, except from Pollard, and then the communication broke down with no one really listening to his request for help.

Lukhanyo Am’s involvement in the entire set was a questionable ruck contest and then watching everything unfold from the other side, with no communication with De Allende about folding over the ruck after he made two tackles in a row.

Some backside protection is needed for a potential switch play, but there were zero Australians out that way to make that happen.

Mapimpi bailed on his edge, didn’t end up being required to make a tackle, and spent the next phase staring at the play from the ruck, while Pollard had two misses in two straight tackle attempts.

These are all breakdowns in organisation for the front line in a critical situation and it just looks like the Springboks aren’t operating at a high enough level to react quickly, even though they were up against it. There is not one person to hang the blame on but the entire system simply isn’t operating effectively.

There are a huge number of examples like this throughout both tests, with plenty of missed opportunities for the Wallabies attack to inflict more pain on the Springboks, even with a full complement of players on the field.

The Wallabies set-piece launch patterns frequently had the Springboks’ reeling by the third or fourth phase. 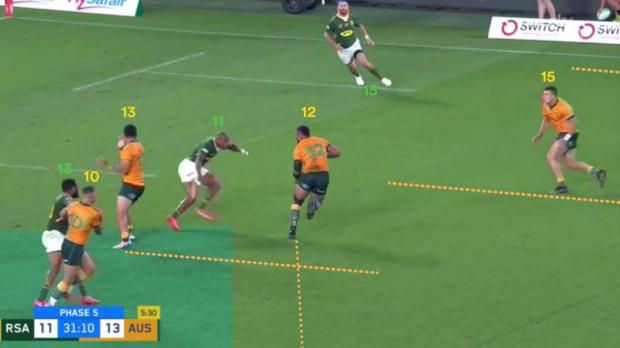 The Springboks can put away their ball-in-hand attacking plans and go back to their aerial game against the All Blacks if they want to, but if they do not fix their defensive problems and discipline they will be in for a rude awakening.

Kicking away more possession in favour of territory will also put their defence under more strain, and potentially open up broken field opportunities for both the All Blacks and Springboks.

The Springboks also need a bonus point win to stay alive in the Rugby Championship. Putting the cue in the rack so to speak and relying solely on 50-50 aerial contests to open up counter-attacking opportunities doesn’t seem like the way to go to achieve that.

In any case, a strategic change will be redundant if the defence continues to wane, and if they continue to get yellow cards and play with 14 men for long periods, it goes without saying they will be punished.

The All Blacks will not be so kind to leave tries begging that the Wallabies did. It will be a step up in speed, efficiency and skill-level for the Springboks and they will have to lift their performance considerably to prevent the All Blacks running riot.

And they will have to do it without two of their best defenders in Kolbe and Du Toit, who have already proven to be massive losses.

They need Lukhanyo Am to get back to his best, who only a few weeks ago was putting together a strong case for a World Player of the Year nomination. He has gone off the boil against the Wallabies.

Over the last two tests he hasn’t played with the same level of intensity, accuracy or urgency in defence and his role is critical. When he is firing, he holds together the defence.

The All Blacks have named Rieko Ioane at centre and Will Jordan on the right wing, two speedsters that will see plenty of ball. The Springboks cannot afford to give them space on the edges like they have given to the Wallabies over the last two weeks.

The challenge is going to be enormous for what will be a milestone in the 100th Test between the two sides and it is going to take special effort for the Springboks to get up, particularly with their performances of late.