All Black halfback Aaron Smith seems to be warming up the right time.

His season so far has been disrupted by All Black-resting protocols, but his performance against the Chiefs was critical to powering the Highlanders’ attack, and was a timely reminder of how important he will be to the All Blacks at the World Cup.

Smith will throw his body at anything in defence despite often coming away second best. However, this doesn’t matter – he isn’t in the side to make tackles, he is there to do his core job and do it extremely well, and it’s this clinical execution of passing that keeps him at the top of the halfback pecking order.

There is just no halfback in New Zealand that can play at the tempo he brings with the level of pinpoint accuracy he executes with. He can pass fluently off the deck or even with smart footwork around the base. The closest No. 9 to Smith’s ability is Bryn Hall, who reached a level last year that deserved national honours and perhaps the back-up job.

Every pass is where it needs to be, and this accuracy starts the Highlanders’ flow by putting everything in motion. 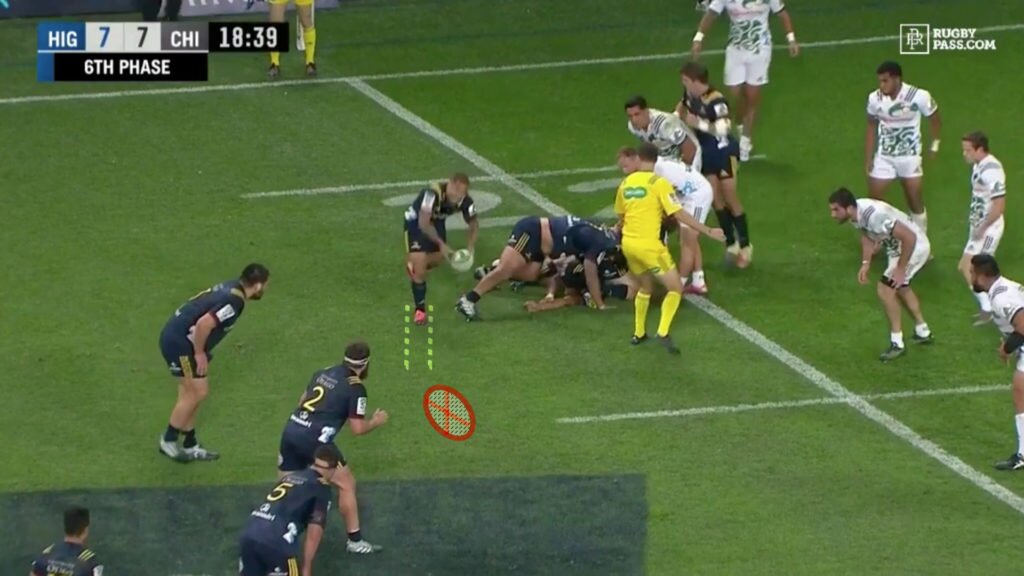 Smith starts Liam Coltman’s run for him by leading him onto the ball, which gives Tom Franklin (5) the cue he needs to time his run on the outside. 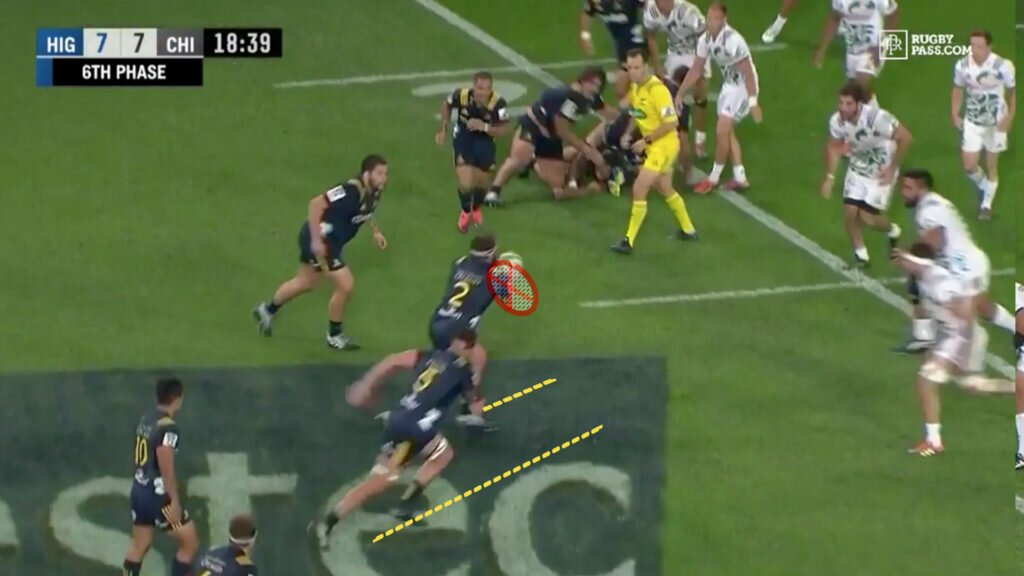 Coltman shows soft hands and deals with the oncoming pressure by providing a well-timed tip ball to Franklin running at pace. 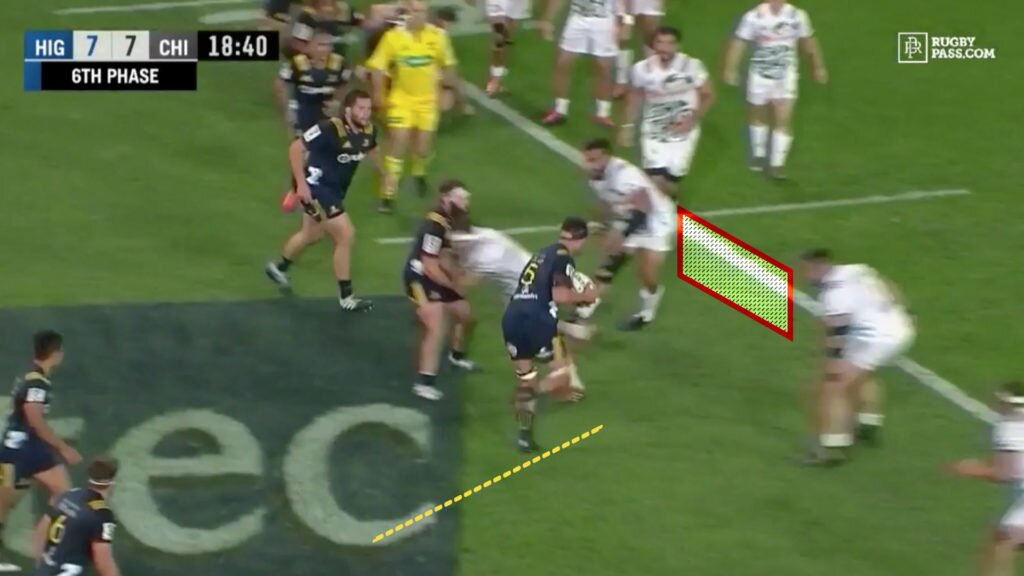 Franklin’s carry is now going to be far more effective, hitting the ball on time with no aligned defender, and the Highlanders will make the gain line as they begin to create a faster tempo with a quick recycle.

It all starts with Smith’s accuracy being on time and in the perfect spot to bring his runner forward, which he does at a rate close to 99 percent of the time.

When you add in Smith’s speed of recycling, it creates massive instability for defensive lines under pressure to make decisions quickly.

The first Highlanders try of the night came off the back of a two-phase lineout play going the same way.

They use a maul to congregate numbers before No. 8 Elliot Dixon carries on a slingshot line coming around the corner. His strong carry gives the Highlanders the momentum they need and possession towards the middle of the field. 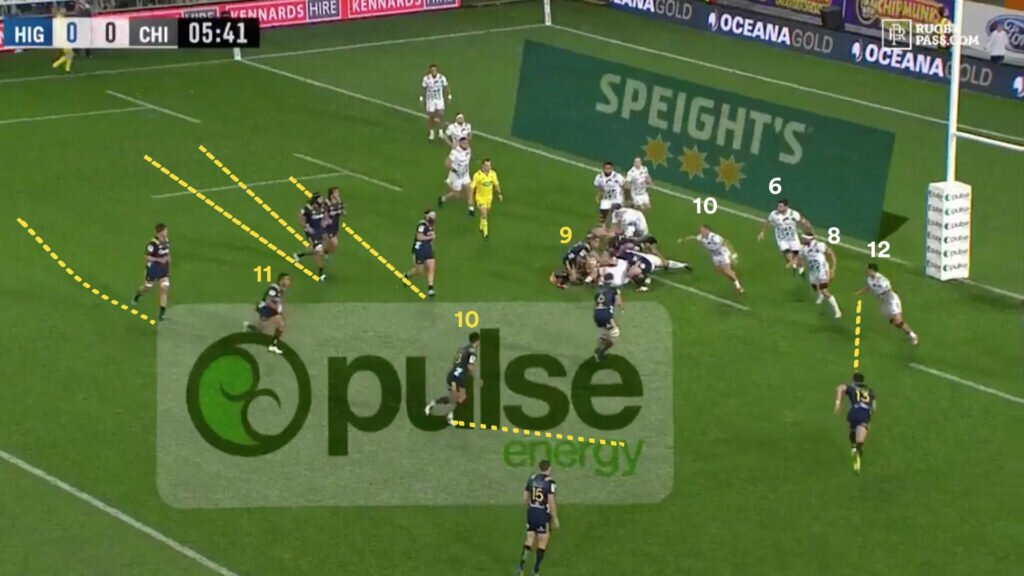 We can see only Luke Whitelock (6) has been able to turn the corner for the Highlanders and position himself for a carry. While Luke Jacobson (6) and Tyler Ardron (8) have been able to fold for the Chiefs, soon they will be taken out of the equation.

On second phase, the Chiefs are still under pressure to fold numbers. Because Smith is able to recycle so fast, the Chiefs players stop fanning out and begin to press forward in attempt to bring line speed, without aligning properly.

Many other halfbacks wait for more forwards to come around the corner if the original play calls for it. Instead, Smith wants to speed up the game and catch the Chiefs short while they are bunched tight around the ruck.

This is the difference between the halfbacks that run the game as opposed to those just playing the game. 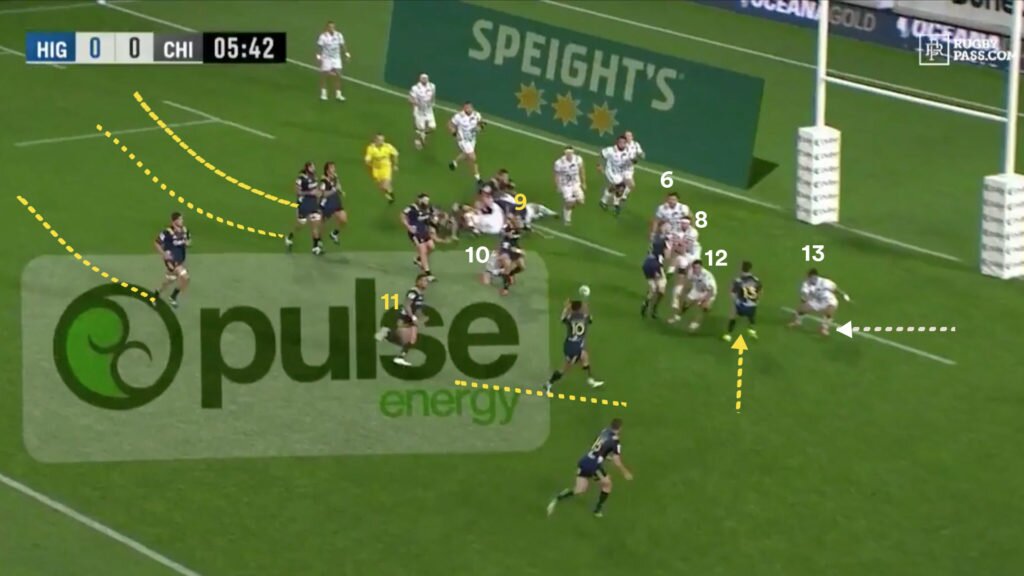 Rob Thompson offers a flat unders line option, which Chiefs centre Tumua Manu is sold on, biting down and leaving his side more stretched to the outside. Smith decides heading out deeper and wider to Josh Ioane is the more attractive option. 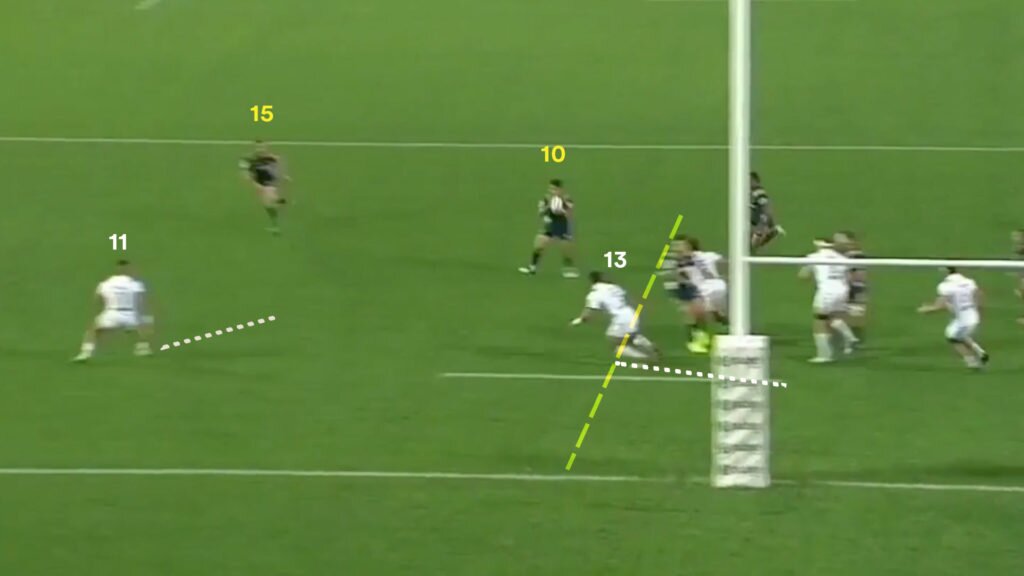 Smith’s deep pass is on the money hitting Josh Ioane (10) in stride on the chest, succeeding in putting him on the outside of Manu (13) by a good metre. All of the Chiefs interior defence are now taken out of the play and won’t be able to slide in time with such a short distance to the line.

Ioane has all the time and the space in the world to press the issue towards Etene Nanai-Seturo (11). Nanai-Seturo has to trust Manu can make up the lost ground, or risk bailing on his own assignment of Ben Smith. 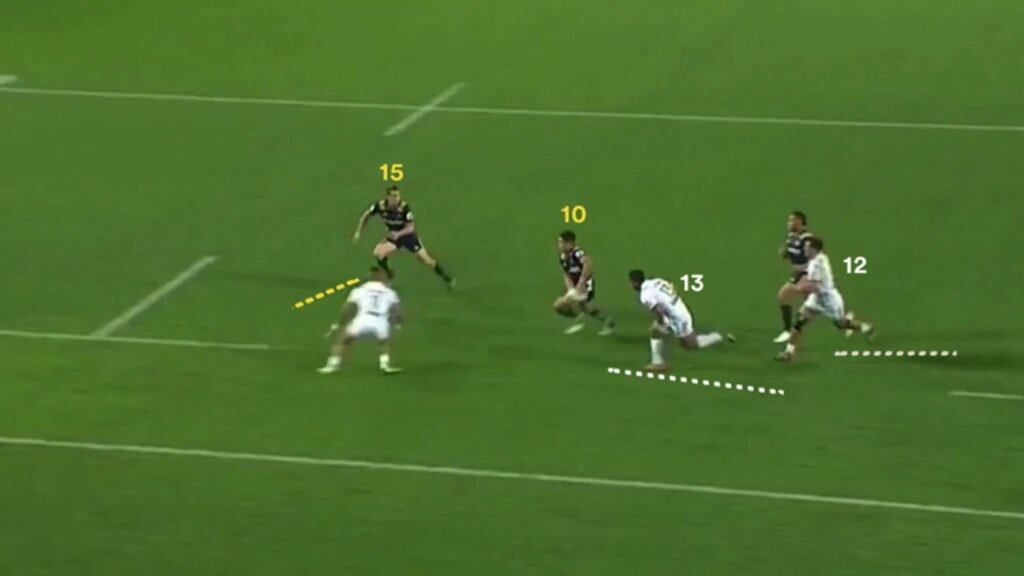 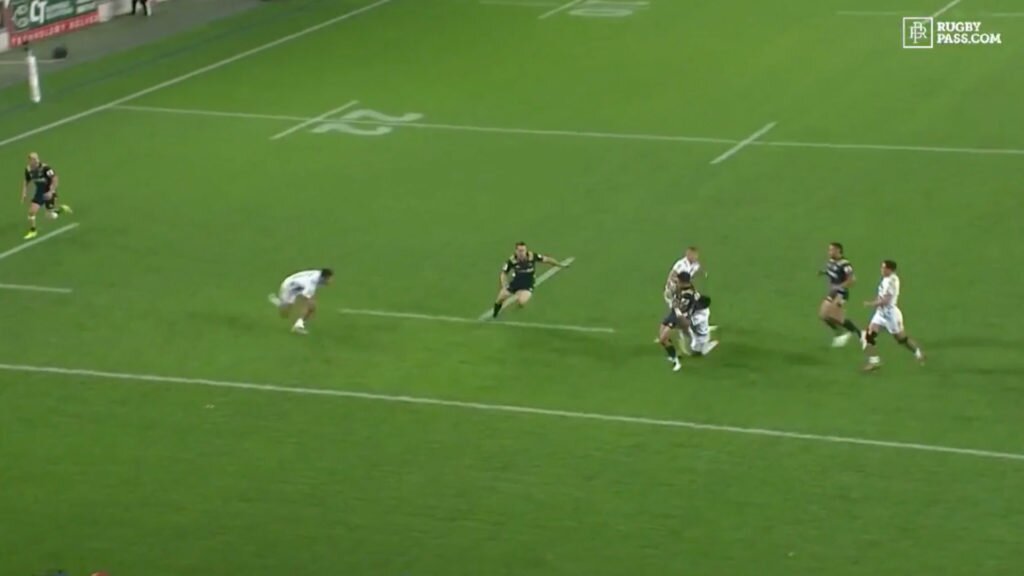 Ioane fakes the pass, Nanai-Seturo doesn’t buy the dummy and commits to the tackle but Ioane is too close to the line, breaking through to score. If he was tackled he would have missed an opportunity to play Ben Smith untouched for a try, but is luckily able to finish himself through contact.

The Chiefs were picked apart in two phases due to the speed at which Smith can recycle and then move the ball, and it was Manu’s decision to jam in under duress which ends up costing the Chiefs seven points.

The Highlanders like to get Smith involved as more of a first receiver as a change-up, in motion where his lethal pass can used in a playmaking capacity. This is frequent on first phase set-piece plays but also during phase play. 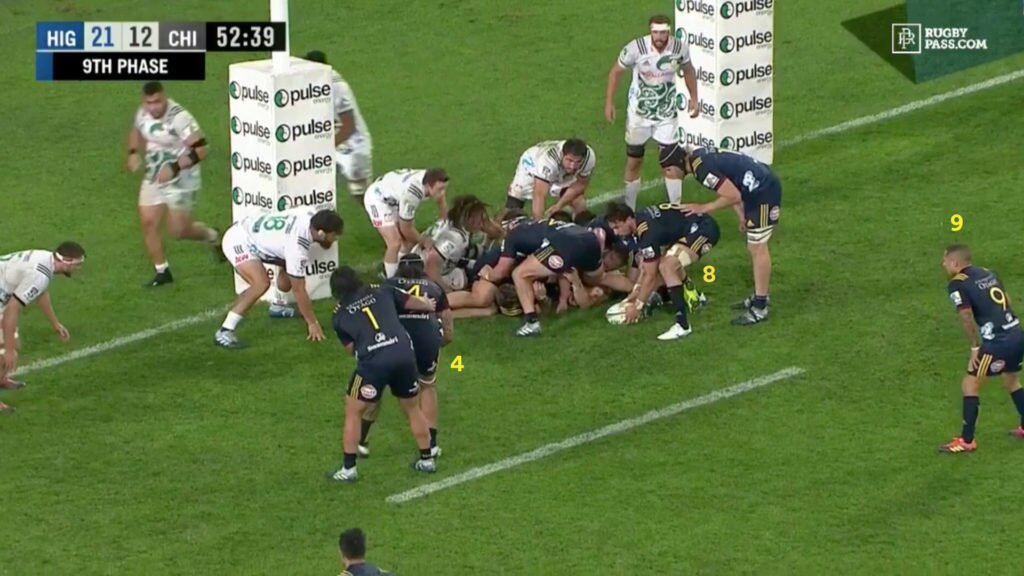 After nine phases, the Highlanders have burrowed down deep into Chiefs territory camped on the goal line. The home side has begun to pick and go using the forwards, with Smith dropping back with the illusion that he is just marshalling troops.

Dixon (8) plays Jackson Hemepo (4) short and the Chiefs try to get an early chop tackle in as the ball goes out the back to Smith. 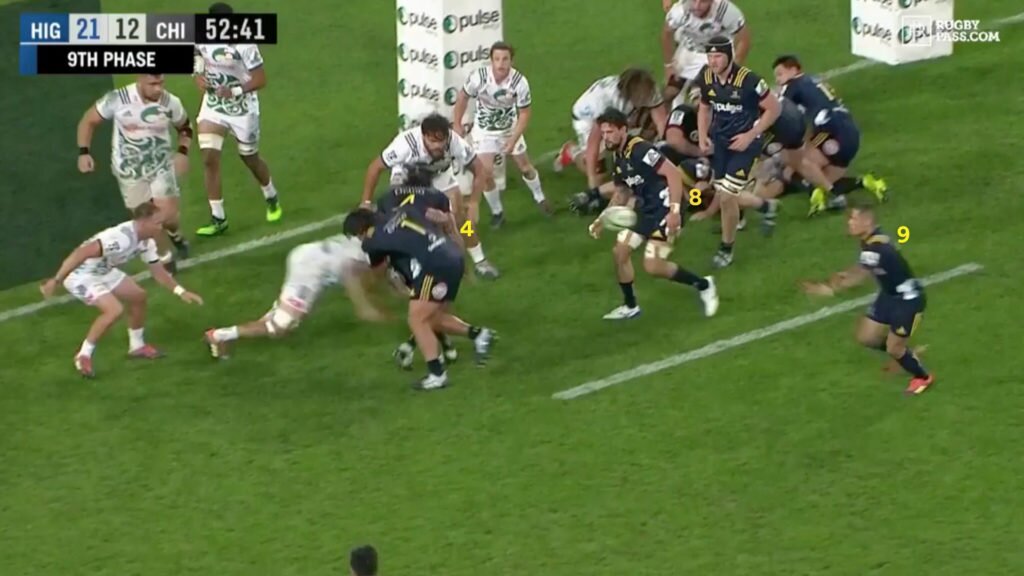 In a position more akin to a first five, Smith has the opportunity to free the numbers outside. With James Lentjies (7) the open man on the edge, Smith fires a laser out wide to the open man. Even with the ball sailing in the air, he has enough time to break through the side tackle of Shaun Stevenson (22). 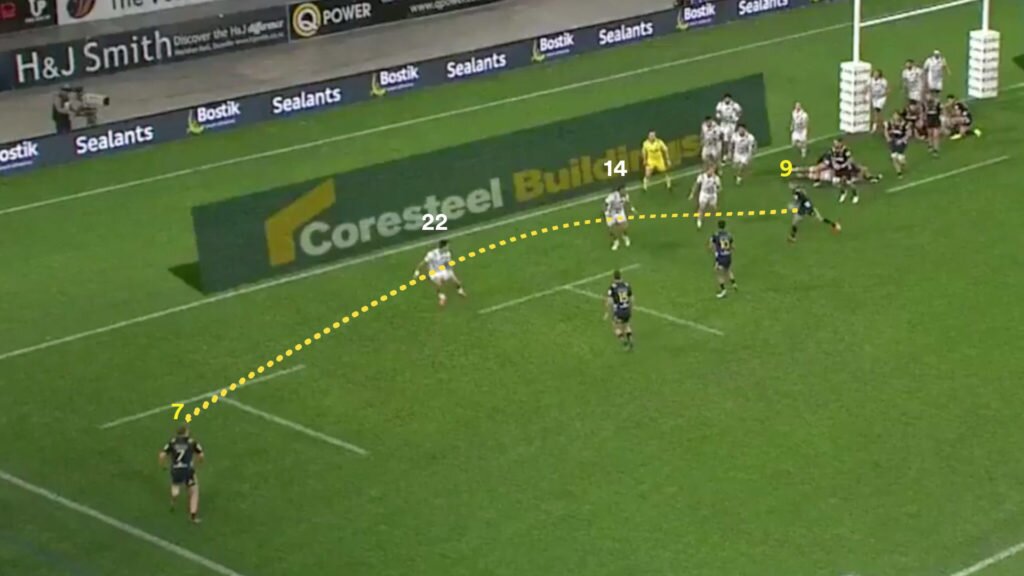 Many teams in this situation continue to play narrow despite it being very difficult to cover numbers out wide once the defence is contracted. Great halfbacks know when to attack this wide and take the ball off the forwards. 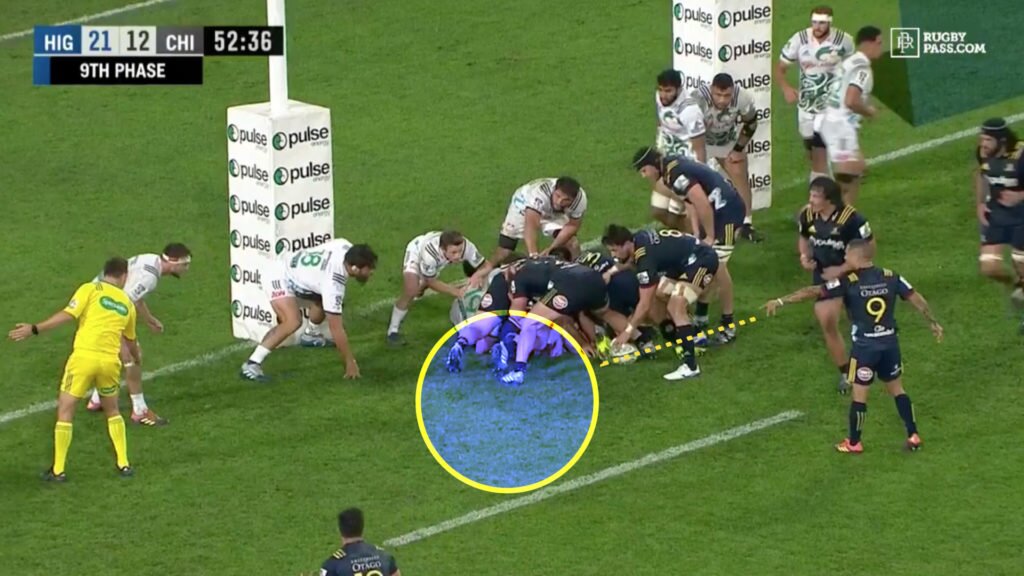 When setting this play up, Smith motions to Dixon getting off the ground from the last phase and moves the forwards into position, keeping the tempo slow and disguising a potential wide movement. 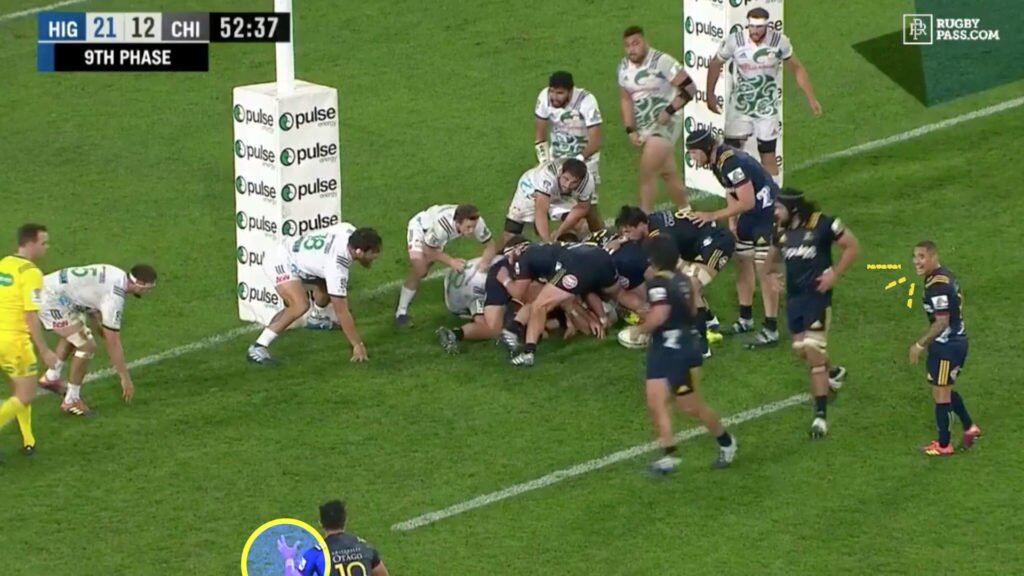 Ioane at the bottom of the screen is ready for flat ball but once Smith changes the call, you see him adjust and slide back further in anticipation of becoming an option for his halfback.

The play is called and the forwards trust Smith it is the right time to strike, and the Highlanders extend the lead to 28-12.

Smith’s three try assists lead to 21 of the team’s 31 points, with only Ben Smith scoring a try without his involvement.

Although the Chiefs are having their worst defensive season ever, his influential performance indicates he could be getting back to his best form, which is timely from an All Blacks perspective.

The Highlanders season hasn’t been without bumps, but with both Smith’s, they are still in playoff contention, and will likely feature if they can keep both All Blacks on the field.