Ulster fans have were left furious yesterday, not so much at the nature of the red card handed to prop Andy Warwick, but rather that previous Leinster infringements didn’t warrant the same punishment.

Table-toppers Leinster booked a spot in the PRO14 final after dispatching Ulster 19 – 38 in the Kingspan, but the sending off that swung the game was the talk of fans on social media.

World Rugby’s zero-tolerance approach to head contacts – off the back of a high-profile lawsuit in the UK – has seen red cards brandished at an alarming rate in recent months. Five were delivered across the water in the Gallagher Premiership last weekend, with a further two this weekend.

Dan Lydiate talks to the Offload:

Dan Lydiate talks to the Offload:

Warrick was given his marching orders by referee Frank Murphy after he fended Leinster prop Ed Byrne with a forearm that appeared to make brief contact with the Leinster prop’s neck. Murphy initially appeared to want to give the Ulsterman a yellow, but a discussion with the TMO Olly Hodges saw it upgraded it to a red card. 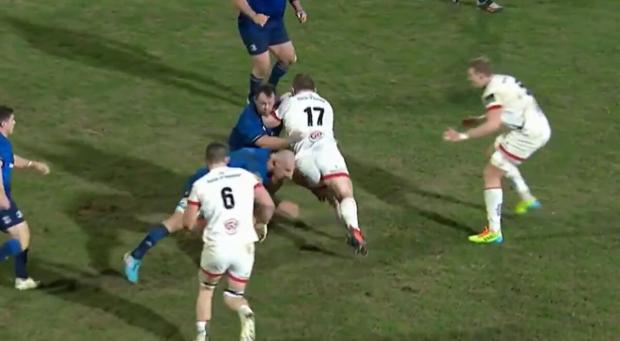 While the merits of the red for Warwick for an incident that might have been a penalty at worst a couple of years ago upset some Ulster fans, what was upsetting more was the apparent double standards on display.

Six foot ten Devin Toner’s yellow for a seatbelt tackle on Michael Lowry stood out as potentially being at least as grievous as Warwick’s indiscretion, but Leinster centre Jimmy O’Brien’s head contact with Ian Madigan objectively looked worse in the context of a game trying to minimise brain trauma.

O’Brien collected Madigan with an upright tackle that saw him inadvertently headbutt the former Leinster standoff. O’Brien was yellow-carded, but it made it incredibly hard to justify the red card for Warwick later in the game.

"Blue 13 leads with the head… while 13 is responsible, I'm looking at a yellow card because of mitigation" pic.twitter.com/ewAnIjNPer

BBC rugby pundit Stephen Watson tweeted: “I realise you don’t referee intent and by the letter of the law Warwick’s elbow is a red – but in that case surely the challenge by O’Brien on Madigan was a red too?”

I realise you don’t referee intent and by the letter of the law Warwick’s elbow is a red – but in that case surely the challenge by O’Brien on Madigan was a red too?

I didn't get this many cards for my birthday.#ULSvLEI

Frank Murphy saying ‘he will discuss that later’ at what point would It be good to talk about. During the match when it’s actually happening or after when it has no more relevance? Absolutely shocking. Disgraceful display tonight. #ULSvLEI

Hate to be one of those fans but if Andy Warrick is wearing blue, might’ve been a different outcome. Unsure how head to head contact is a yellow but a no look elbow with little force warrants a red?????? sad to see a potentially excellent game ruined by poor discipline #ULSvLEI

The primary focus has to be on player welfare, I therefore fully agree with Warwick's red card tonight. But how?? How are the first two only yellow? In terms of danger, they are all equal if not greater, regardless of intent. @WorldRugby @IRFURugby consistency in calls please???

Another inter-pro game that, unfortunately, has run away from Frank Murphy

Too many penalties. Too many cards.

U watch that Warwick red &every time u see it the decision looks ever more ridiculous! @StephenFerris6 makes a good point ie defender was tackling so high in the first place. In the end it was a nothing collision that shudnt have been allowed to decide such a big game! #ULSvLEI

After the game Ulster head coach Dan McFarland said of the incident: “I’m certainly going to talk about them, but that will be done in private.”

The debate rumbles on.