RUGBYPASS+ Will the Premiership go to war with the URC?

By Nick Bishop
Will the Premiership go to war with the URC?
By
Nick Bishop
6 months ago
Gallagher Premiership
7:26am, 25 May 2022 6 Comments

Perhaps Eddie Jones was right after all. After just a few months surveying the club scene in 2016 as the new head coach of England, he knew in his heart of hearts that there were only eight or nine fully sustainable professional entities in the country. The depth of playing quality did not justify more than that.

None of Jones’ wishes to fix the perceived problem have come true of course. Far from shrinking, the Gallagher Premiership has now expanded to 13 clubs and they are all ring-fenced from the threat of relegation.  That charmed circle represents the number of current shareholders in the professional game in England, and it will remain so for the foreseeable future.

While the number of clubs has increased, most of the other aspects in the English professional game are shrinking around them. The salary cap in the Gallagher Premiership, which stood at £7m in 2020, reduced to £6.4m in 2021 and currently sits at £5m, with the second marquee player at each club no longer exempt from cap restrictions next season.

Those reductions were agreed against the backdrop of Covid-19, and the grim underlying reality that only one English club (Exeter Chiefs) had ever succeeded in attaining the financial break-even point in the professional era. Player budgets are beginning to compare ever more unfavourably with their main rivals in France (£8.5-9m), and even Ireland at an estimated £6.3m per province.

It all seems a world away from the political upheaval before the 2014-15 season, when the threat of a breakaway by English and French clubs forced a major restructuring of European club competition. The LNR and Premiership rugby effectively took over the administration and marketing of the two tournaments under the banner of the newly-formed European Professional Club Rugby, and promptly increased their own representation in them.

The ten or eleven clubs from the [then] Pro 12, composed of clubs/regions from Wales, Scotland, Ireland and Italy, which had previously participated in the old format of the Champions Cup, were trimmed back to seven in a new 20-team tournament. The trick worked: where teams from Ireland had won five of the seven competitions between 2005 and 2012, clubs from England or France have lifted the Champions Cup trophy in nine of the ten seasons since.

The latest iteration of the Heineken Champions Cup contains eight teams from each major league – the Gallagher Premiership in England, the Top 14 in France and the URC containing the Celtic nations and most recently, South Africa. The introduction of the ex-Super Rugby franchises from the Republic and the resurgence of Ireland argues for another restructuring, with the URC likely to become a northern hemisphere powerhouse surpassing the Premiership.

“What I am finding mainly at the moment, is that the majority of ball-park salary expectations are salaries that you would still expect to be paying if it was a £6.4m market.

“It doesn’t really seem to be at this stage, that kind of realisation that it is a big drop-off. In theory, it is probably a bit more than a 25 per cent drop-off, when you start talking about second marquee players disappearing next season if they are not under contract.

Based on 2013 reasoning, it would seem like a good moment to increase URC representation in European competition, in order to raise playing standards further.

“That does make the Premiership way less competitive when it comes to Southern Hemisphere sides. So, some of the base salary levels in New Zealand and Australia now are actually kind of comparable to what we could offer whereas before, in the £6.4m [market], you could be very competitive.

“[Purely] on base-level contract that is not really the case now. Whether that will change over the next two years I am not sure but I do think that is going to put an onus on developing [home-grown] players.”

South African players do not count against the foreign import cap because of the Kolpak ruling, and have provided the backbone for certain Premiership sides like Sale because of it. With the four leading South African franchises now based in European competition, it is easy to foresee those players finding the prospect of a return home, or a move to a URC club more attractive. The Manchester club already know they will lose Lood De Jager, JP du Preez, Faf de Klerk and Rohan Janse van Rensburg at the end of the current season. That is a large tranche of talent to replace.

At the same time, the four Irish provinces have been busy widening the gap between themselves and their English counterparts, in terms of results in the Champions Cup. They have won eight of the 11 matches at an average winning margin of just under 15 points per game. Two of those English victories occurred in matches between the top club in the Gallagher Premiership (Leicester Tigers) and the so-called ‘fourth province’ in Ireland, Connacht. Despite that divergence, Leicester only won the double-header at the pool stage by a total of seven points.

Based on 2013 reasoning, it would seem like a good moment to increase URC representation in European competition, in order to raise playing standards further. As SA Rugby’s Chief Executive Jurie Roux commented at the URC’s inception, “South African rugby has for many years imagined a future aligned with Northern Hemisphere rugby. This is a watershed moment in South African rugby history, opening new doors and heralding a new and exciting era for our sport.” Why not reflect the arrival of a traditional southern hemisphere superpower in the north by creating more space for their sides in the top European tournament?

The true point of comparison for the Gallagher Premiership is not the current gold standard for Irish provincial play (Leinster), but the middle order – the other three provinces tracking a short distance behind them.

Munster overcame Rob Baxter’s Exeter Chiefs over two legs in the Champions Cup round of 16 in the absence of several key players of international pedigree, established or promising: David Kilcoyne, Tadhg Beirne, RG Snyman, Gavin Coombes, Chris Cloete [and captain Peter O’Mahony for the first leg] up front; Andrew Conway and Joey Carbery [for the first leg] behind.

The fact that Munster are coached by a South African – Johan van Graan, with JP Ferreira as his defensive assistant – only added another layer of intrigue to the unholy alliance built around a green jersey, whether it is emerald or myrtle in hue.

For the past several years, Exeter have enjoyed the strongest possession-based attack in the Premiership, while Munster’s greatest point of strength is their ability to take away ball in contact. The Sandy Park juggernaut likes to keep the ball, the dervishes of Thomond Park like nothing better than to pinch it. It set the stage for a classic clash of styles.

The very first sequence of the game predicted so much of what was to come. It started with an Exeter lineout on the halfway line at just 50 seconds on the game clock, and did not finish until the 11th phase of possession, one minute and 40 seconds later. The Chiefs advanced 40 metres downfield, only to lose the ball to a turnover ten metres from the Munster goal-line: 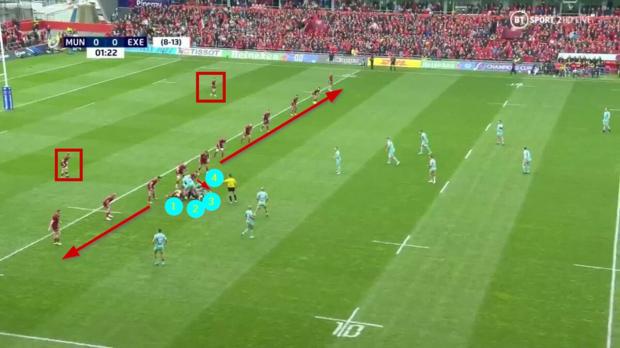 The men in red set out their stall early, making two-man tackles, winning the collision and forcing one of the two defenders through the cleanout screen on to the Exeter number 9. The camera shot represents a ‘win’ for the defence, with four Exeter players attending the ruck, as opposed to only one Munsterman, and all the defensive players in perfect shape – on their feet and position to cover the width of the field in both the front line and backfield.

The picture improved for the D at a similar phase on the opposite side of the pitch:

This time one of Exeter’s biggest ball-carriers (second row Sam Skinner) is forced a little further back in contact and the ball is almost lost to a turnover by Peter O’Mahony.

The turnover duly arrived 50 seconds later, at the hands of the very same player: The ball-carrier Johnny Gray is again knocked back a step or two in the collision and that forces the two Exeter support players to alter their angles of entry. One has already left his feet while the other is too high to remove the Munster captain effectively.

By the 38th minute of the first period, Munster had already turned over seven balls on the deck, and by the end of the game, that figure had risen to a colossal 11 pilfers, made by seven different players. Most were achieved when it really mattered, deep in the red zone:

In the first instance, John Hodnett chops the ball-carrier low for number 8 Jack O’Donoghue to move in over the top for the poach. In the second example, second row Jean Kleyn makes the steal and hooker Niall Scannell clears up the ball at the base.

The team-wide threat at the breakdown denied Exeter their usual continuity on attack, and it was no different when backs had to be committed to the tackle as primary cleanout players and on-ball defenders:

The Chiefs try to shift the ball wide, but the two big Munster centres, Damian de Allende and Chris Farrell, are physically more imposing than the Exeter inside backs and drive them off the tackle ball. De Allende is at it again in the second example, spearheading the counter-ruck to win another turnover.

It was the iconic O’Mahony who finished at the top of the charts with three individual turnovers, the most spectacular of which was a monstrous double involvement – first driving through Jacques Vermeulen at the base of the scrum, then marching back Zimbabwean giant Dave Ewers at the flinty tip of another winning counter-ruck:

None of the teams from the English Premiership have advanced beyond the semi-final stage in either of the Champions Cup or the Challenge Cup in Europe in the 2021-22 season, and matters are not likely to improve as the salary cap contracts further and the top imported talent moves further out of reach.

Recent results show that the domestic structure in Ireland is more compact and manageable than it is in England in the present moment, and the addition of South African ex-Super Rugby franchises to the top European tournaments point the way to the future. It is highly likely that the United Rugby Championship will become the primary challenger to the Top 14 for major honours, and that reality needs to be reflected in increased representation for the old ‘Celtic League’ and its new, unexpected and truly global reach.