By Nick Bishop
There can be no substitute for power in the All Blacks midfield
By
Nick Bishop
8 months ago
InternationalNew Zealand
11:41am, 03 May 2022 14 Comments

When he was coaching in Wales, I asked Sir Graham Henry about his playing philosophy. I recall one such conversation at the local Gastropub in Marshfield, a little village just outside Newport. I asked ‘Ted’:

“If you had a choice, would you prefer to go through an obstacle, or go around it?” The familiar wry grin appeared on his face, as he paused for a moment before lifting forward out of his chair.

The face hardened for a moment as he stated forcefully, “I would go around it.”

The truth is that Ted and the other members of his coaching ‘holy trinity’ with the All Blacks, Steve Hansen and Wayne Smith, had realised after the 2007 World Cup disaster that it was necessary to meet fire with fire. At least, to the point where that determination to meet the physical challenge had softened the opponent up sufficiently to go around him.

With the beginning of a new World Cup cycle came a new vision of what the New Zealand midfield could become. There were to be no more ill-fated experiments like the pairing of Luke McAlister (a natural number 10) and Mils Muliaina (a natural fullback) in the centres, during that traumatic 2007 quarter-final against France in Cardiff.

Out went the second playmakers like McAlister and Aaron Mauger, and in came Ma’a Nonu. Nonu had played most of his rugby in the centre or on the wing until then, but the three wise men foresaw the dim outline of an outstanding second five-eighth lurking within Nonu’s hulking frame. Nonu had the size and power, at six feet tall and 110 kilos, to interest defenders in the straight-ahead run. It was left to Wayne Smith to develop his long passing, his kicking game and ability to function as a second set of ‘eyes’ for Dan Carter.

The project succeeded so well that Nonu and his regular provincial and international centre partner, Conrad Smith, shared over 200 caps for the All Blacks in the 12 years between 2003 and 2015. They remain to this day the best centre combination to have played the game in the professional era.

The second arm of power in the New Zealand back-line for most of that period was left wing Julian Savea. At six foot four inches tall and weighing in at a listed 103 kilos, Savea (along with Nonu) offered the direct threat that enabled the All Blacks to first transfix their opponents, then go around them.

There have been some notable instances of New Zealand teams in Super Rugby Pacific looking to feel the force at number 12 in 2022. Bryce Heem, who played on the wing for the Worcester Warriors in the English Premiership, has appeared at second-five eighth for the Blues, while the Hurricanes have mimicked the same experiment with Julian Savea himself.

The most significant trial from an All Blacks viewpoint, has been the recent move of Jordie Barrett to the number 12 spot at the Wellington-based outfit. Like Heem and Savea, Jordie has the requisite size at 6’5” and around 100 kilos to make the kind of physical impact on the game that New Zealand were lacking in 2021.

I think 12 is the most comfortable position for me … It’s exciting. I’m able to get my hands on the ball a lot and contribute.

Jordie Barrett on playing in the midfield

Even more importantly, the player himself has said that enjoys playing in the spot, and sees his future in the game there. Before the Super Rugby Pacific encounter against the Chiefs at the beginning of April, he commented:

“I think 12 is the most comfortable position for me.

“This week at training, I haven’t felt clunky, which is a good thing.”

“I’ll need a bit of an edge going into the weekend playing against some quality midfielders in Quinn Tupaea and Anton Lienert-Brown, but I’ve felt good,” Barrett said.

“It’s exciting. I’m able to get my hands on the ball a lot and contribute. I’ve been asked to do something for the team, so it’s something I’ve just jumped into.”

The selection of Jordie Barrett at number 12 offers New Zealand a lot of flexibility, and a whole host of opportunities. The Hurricanes continued to deploy him as a fullback in phase defence, in order to use his outstanding ability in the air:

From set-piece, they moved him into the front line to exploit his extra physicality in contact:

Barrett makes a dominant tackle on Crusaders flanker Ethan Blackadder and forces Tom Christie to go backwards to re-ruck over the top of the big back-rower. That allows a steal by the Canes at the post-tackle.

It is also hard to overstate the impact of the presence of two big power backs operating in the same area on both sides of the ball:

Julian Savea shuffles laterally on the fold towards touch, while Jordie comes up from the backfield; as a pair they hammer Tom Christie across the side-line and force the turnover.

On attack, the capacity to present two big threats, and build power on power can be devastating:

The second example (from the SRP game versus the Highlanders) is particularly lucid and instructive. The physical threat of Jordie on the short ball pulls two Highlanders’ defenders towards him and opens the space to the outside for Julian Savea, and Savea’s power does the rest: It is Julian’s ability to ‘go around’ that converts the opportunity, it is also Jordie’s threat to ‘go through’ that levers open the space. You can link the power together:

Or, you can split it over two phases, to either side of the ruck:

Power players tend to attract each other quite naturally, like forces of nature designed to produce the same result. If there were definite glimpses of the impact Jordie Barrett and Julian Savea could produce in combination on attack against the Highlanders and Crusaders, there were also signs of a similar relationship forming between Barrett and Julian’s brother Ardie. Ardie Savea is almost certain to be picked as the All Blacks’ number 8 in 2022:

In the first example, Jordie cuts back inside to make the initial penetration, then Ardie picks up the torch on the pick-and-go to make further inroads. The second sequence amply illustrates the effect of building power on power, one phase after the other.

Jordie Barrett takes play well over the advantage line on the first phase, and by the third Ardie Savea is primed to convert ‘advantage’ into ‘score’: 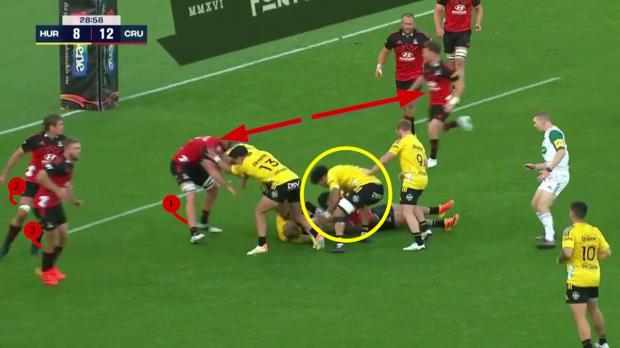 The effects of power are there in black and white – or rather, yellow and red. The Crusaders defence has been comprehensively split, with three forwards making it around to the far side of the ruck but leaving a yawning gap between them and the first near-side defender (No 9 Mitch Drummond) as Ardie goes to pick up the ball.

There were also encouraging hints that Jordie Barrett could play the essential role of the ‘eyes’ of the first five-eighth on attack: At the same time, he can keep the added value from his experience as a fullback, and put it to good use:

The selection of Bryce Heem by the Blues, and first Julian Savea, then Jordie Barrett at second five-eighth by the Hurricanes shows that New Zealand rugby is well aware of what it has been missing since the heyday of Ma’a Nonu. The impact is just not there without backs of his power and stature, and the way in which the Blues midfield was physically dominated by the Fijian Drua last weekend with Heem absent underlined the point – if it needed underlining.

The effect of Barrett in combination with the Savea brothers adds a new tier of intrigue to the midfield debate for the All Blacks. Can Julian Savea still play at All Blacks level? Can Caleb Clarke be the Julian for a new decade? The answer to those questions may determine whether Ian Foster’s All Blacks can go through as well as they go around in 2022, and at the 2023 World Cup.