By Nick Bishop
The two changes that elevated the All Blacks at Ellis Park
By
Nick Bishop
5 months ago
InternationalNew ZealandSouth Africa
3:54pm, 17 August 2022 28 Comments

After the first game of New Zealand’s mini-tour of the Republic, I wrote an article questioning Sam Cane’s role in the current All Blacks set-up.

The article focused on whether evolution, or revolution was the way forward for Ian Foster’s charges. How deep does change need to go in order to get the outcomes you really want? How much transformation can occur with Foster still remaining as head coach, and Cane as captain?

At least the top decision-makers in New Zealand have now been able to make a more informed choice about their leadership structure, both coach and captain, after events at Ellis Park, where the All Blacks came back from the loss at Mbombela to win by 35 points to 23 in Johannesburg.

As NZR’s Chief executive Mark Robinson commented after Ian Foster’s recent re-appointment up to, and including the 2023 World Cup:

“We feel this is a new dawn for this team.”

If Ian Foster has indeed been coaching the attack since Brad Mooar peremptorily got the boot, Robinson and his cohorts will have seen progress in that department. If Sam Cane’s role has really changed in a revamped back-row, it will have provided more support for maintaining the status quo.

Improvement? For sure. A new dawn? That is far more of a reach, based on the relief of winning one game in the heartland of South African rugby.

As always, Foster himself was more grounded, and leaning towards understatement at the post-match presser:

“This group has reformed and reshaped a bit, and we could not be prouder of their effort – coming up here to altitude, in a game which was swinging around: winnable, and losable. To finish strong, over a mighty team, on this ground is a pretty great occasion for us.”

Reformed and reshaped a bit? There were a number of mini-revolutions in outlook which contributed to the outcome. Richie Mo’unga is not the same type of first five-eighth as Beauden Barrett at all; they are as alike as chalk and cheese.

Mo’unga has been out in the selection cold for far too long, and he proved the value of his passing and kicking games again in the Ellis Park hothouse. At long last, New Zealand were able to get some attacking use out of Rieko Ioane at centre on the end of Mo’unga’s passes, even if he does play the spot more like a natural wing:

Sam Cane is overloaded at the breakdown by two Springbok defenders and barely scrapes the ball back, but Mo’unga’s beautiful long delivery off his left hand saves the situation and converts defence into long-range attack. Will Richie Mo’unga still be the number one first five-eighth with a fully fit and firing Beauden Barrett back in the frame? Will the change stick, or is it just political spin?

More changes occurred in the structure of the back five forwards, although they were more subtle. Over the past year, the New Zealand coaches have been wedded to the idea of Akira Ioane as their first choice number 6 alongside Ardie Savea and either Dalton Papalii (then) and Sam Cane (now).

As both the stats and the clips from my previous article illustrated, with Akira playing a wider role on both attack and defence, most of the hard work in the middle of the field was left to the number 7, with some assistance from Ardie – whenever he was not playing his primary role as the main forward ball-carrier.

This has created problems upon Cane’s return from a serious injury, with the associated loss of ultimate physical edge on carry and cleanout. A number of issues were addressed by the selection of Shannon Frizell in the back-row at Ellis Park. Frizell’s presence allowed Sam Cane to play a role which is far better suited to his capabilities at this stage of his career. As Bryan Habana commented in the half-time interlude on the telly, “[The Springboks] have been found wanting physically. Shannon Frizell has made an incredible impact.”

In fact, Shannon Frizell was only one aspect of the sea-change. Let’s take one simple statistical sample in the overall shift of thinking: in the first match at Mbombela stadium, Sam Cane topped the ruck arrivals on Kiwi ball with 23 attendances to Sam Whitelock’s 14. At Ellis Park the figures were reversed, with Whitelock taking pole position with 29 ruck attendances to Cane’s 14. It reflected the transformed nature of their roles in the game.

Now add in Frizell’s eight carries for 44 metres in Johannesburg, compared to Akira’s meagre four runs for 10 metres at Mbombela stadium, and the bigger picture begins to emerge. Instead of having their number 7 in the middle of the park, with the number 6 out wide and Ardie shuffling between the two, Frizell dominated the midfield and the All Blacks pushed Sam Cane out towards the edge, to support the backs whenever he could. It made sense, especially with the increased range of passing from their number 10.

Let’s take a look at the new pattern in action, with some examples from the first half at Ellis Park. The first sequence starts with a Sam Whitelock lineout turnover near halfway: 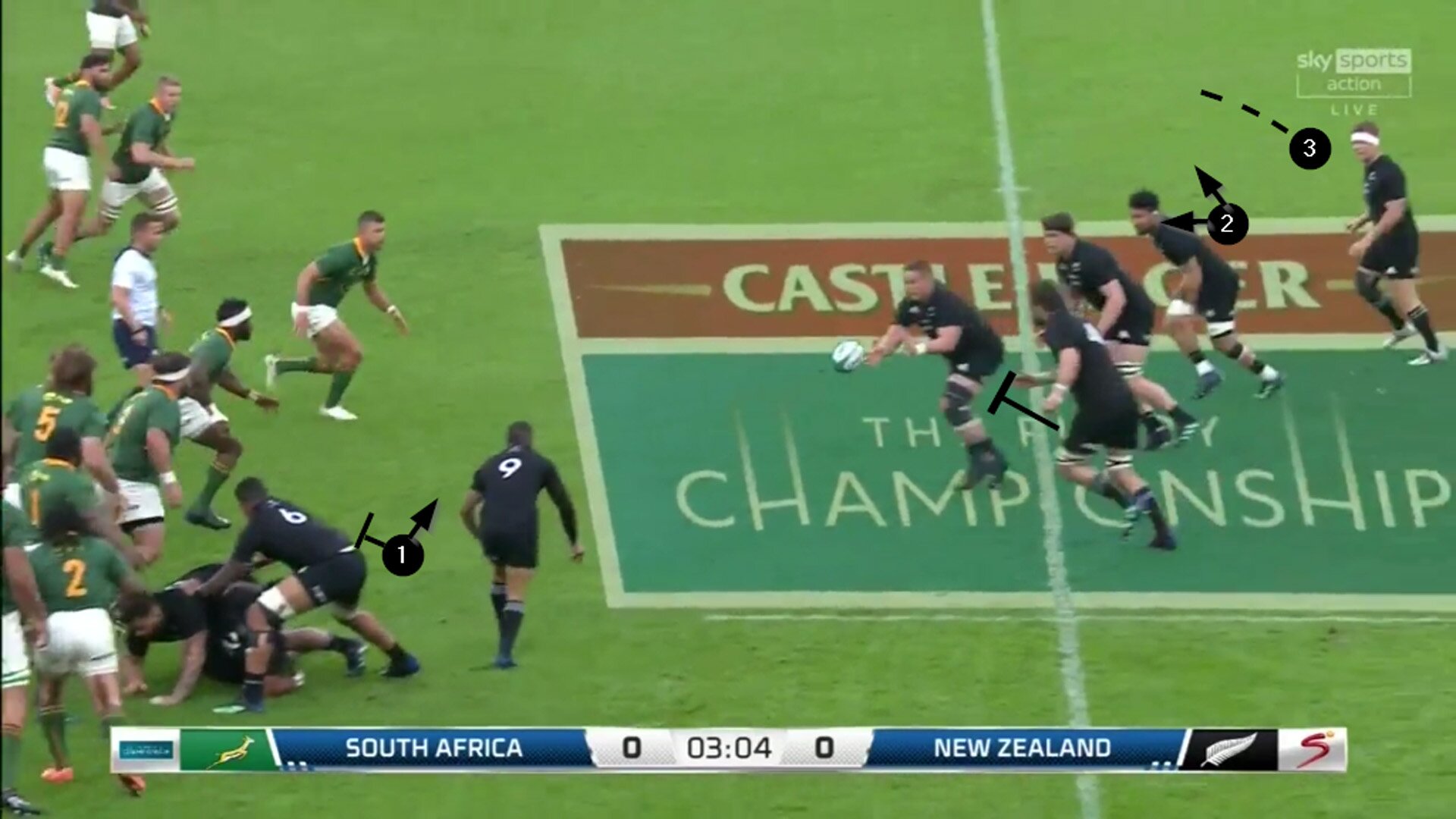 Remember this picture. There are several features which became essential as the game unfolds. Samisoni Taukei’aho and Shannon Frizell have done the initial spadework, with the Chiefs hooker carrying and the Highlanders flanker cleaning out over the top of him. Sam Whitelock is ‘refused’ in the next pod, wanting to clean out, not carry; Sam Cane is already the widest of the three back-rowers as phase-count begins.

Taukei’aho and Frizell carry three times between them, Whitelock authors three cleanouts and Cane stays out as wide support throughout. On the way back, the three back-rowers show their hand: 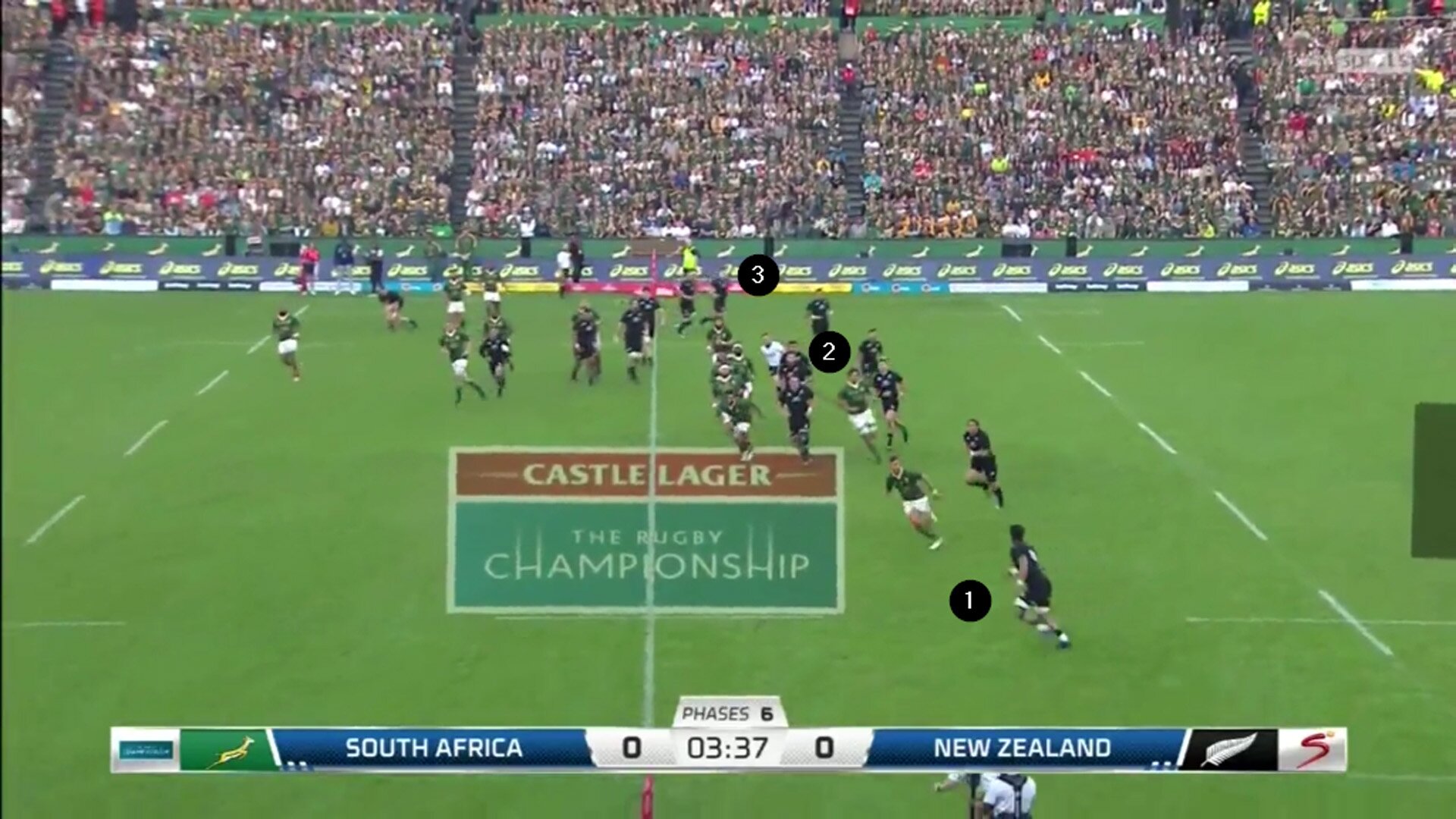 As David Havili delivers the cross-kick, Sam Cane is wide right, Ardie Savea is wide left, and Shannon Frizell is in the middle. There, in a nutshell, is the new back-row structure: Frizell handles the hard yards inside, carrying and cleaning out; Ardie could come short on the pick-and-go or go long to the touch-line, depending on circumstances; Sam Cane played out in the 15-metre channel whenever possible.

The pattern only malfunctioned when Cane was asked to play too far inside:

First Frizell carries, then Taukei’aho, with Cane bouldered backwards at the third collision in midfield. Even then, the All Blacks were able to manufacture a silk purse out of a sow’s ear later in the sequence, with Richie Mo’unga’s pump-fake taking play into the left 15-metre corridor on the front foot, and both Cane and Savea in eager attendance.

The most complete statement of new intent occurred at a sequence just before the half-hour mark.

Taukei’aho carries, Whitelock cleans out, and suddenly there is a little bit of space for Aaron Smith to bring Caleb Clarke onto the ball right up the middle of the field.

Sam Cane immediately shifts out to the right 15-metre zone where he can support Rieko Ioane and Will Jordan, first on the pass, secondly on a recovery of the loose ball:

Now the All Blacks are in their ideal phase-shape: 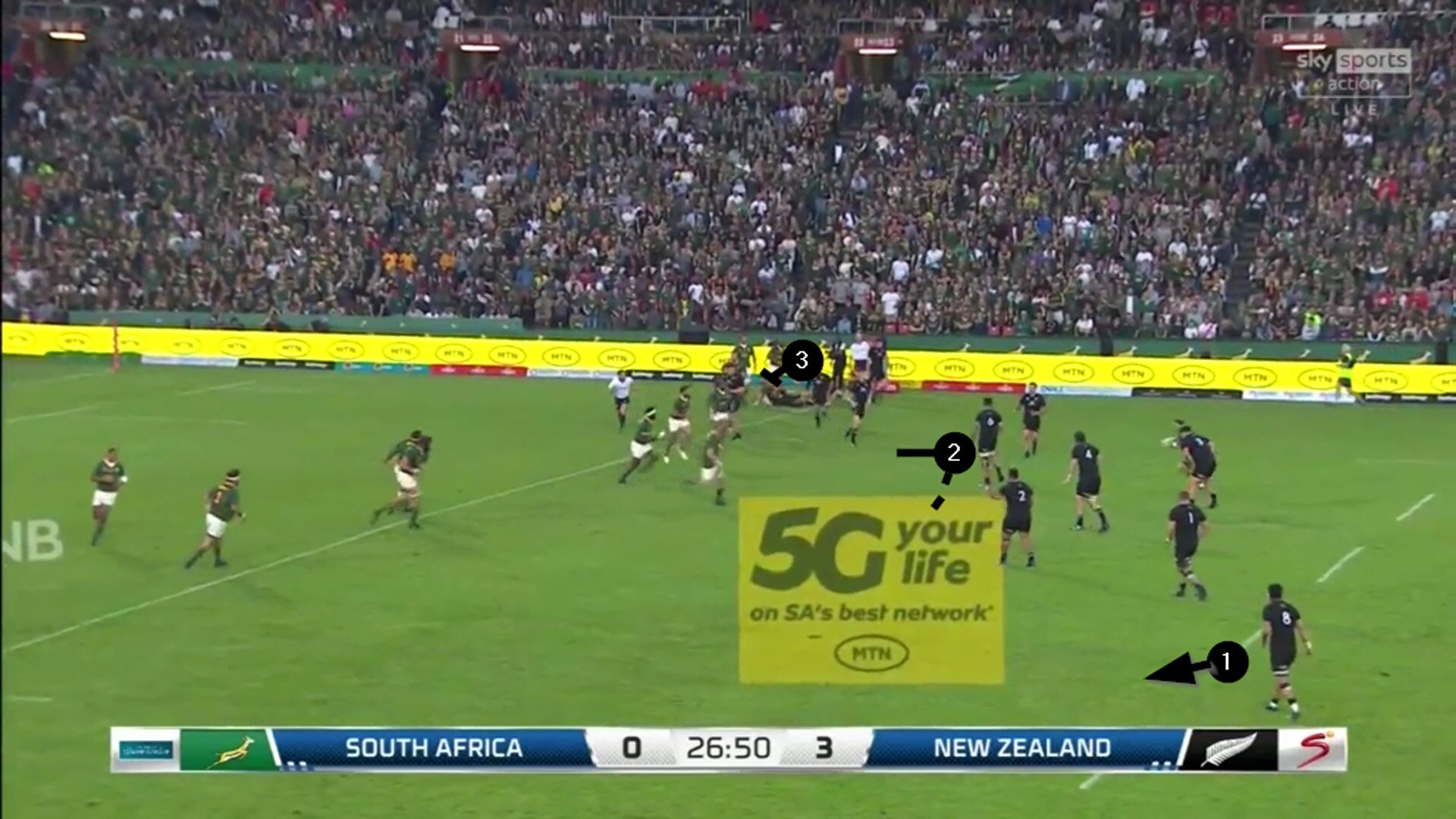 Cane is on the right, Ardie is on the left with Shannon Frizell fore-fronted (along with Samisoni Taukei’aho) as potential ball-carriers in the middle, and Sam Whitelock ‘refused’ for cleanout duty behind them. There is a sense of crystal-clear purpose at long last, with everyone’s role well-defined and within the natural range of their capabilities:

Taukei’aho and Frizell carry, Whitelock cleans out, then the ball reverts to the short-side where Sam Cane can support his outside backs on the scoring phase.

After the match, Sam Cane addressed the gathered press corps as follows:

“There’s never been any question about the level of care within the group, and the work ethic. For us to be in a Test match like that tonight, under immense pressure and with such a hostile crowd, with a match which swings back and forth… To be able to produce that [performance] speaks highly about the group as a whole. We’re stoked that we were able to put out a performance we could be proud of.”

Improved performance was due to a much clearer grasp of the selection and strategic priorities: the need for Richie Mo’unga’s passing and kicking game at number 10, the need for a more direct and powerful presence in the back-row to allow Sam Cane to support the extra width Mo’unga could provide.

Whether the changes made for one game mean a deeper transformation and the ‘new dawn’ trumpeted by Mark Robinson, remains to be seen. The jury is out, and it is still deliberating its verdict. What happens when Beauden Barrett comes back to full fitness? Does Ian Foster have the strength to double down and stick to his selection guns? Are there other openside flankers, like the Blues’ Dalton Papalii, who can play Sam Cane’s new role even better than the captain himself?

The relief may be palpable, but many an underlying question remains.