RUGBYPASS+ All Blacks back row desperate for a shake-up

By Nick Bishop
All Blacks back row desperate for a shake-up
By
Nick Bishop
5 months ago
InternationalIrelandNew Zealand
10:58am, 09 August 2022 29 Comments

If you listened to head coach Ian Foster’s comments at the press conference after the match in Mbombela, which the All Blacks lost by 26 points to 10, you would think that the men in black were developing nicely:

“We’re bitterly disappointed but I felt it was our most improved performance this year. Some of the areas we really shifted our game forward. In a game dominated by defence, we defended well but our timing was out a little bit in terms of the attack, so we’re going to have to go and have a look at that.”

“There are a few players over here for the first time feeling the pressure that comes from this type of team.

“We came over here for a two-game series and we always knew it was going to be tough. We felt that tonight. They get the lollies and they thoroughly deserve that. We’ve got to take some things that we’ve made big shifts in. We nullified a large part of their driving game.

“We made some shifts defensively and in the last quarter, we were starting to open things up. We started to snatch at a couple of balls which is frustrating but we’ve got to take that experience and take it into Ellis Park, walk in there and give it a crack.”

Foster finished by adding, “Sit back and absorb the lessons, trust a little bit and relax… At the end of day, you don’t get the change you want by making dramatic changes and putting too much pressure on players.”

So, no dramatic changes, keep trusting the coaches and players, things are more or less going to plan and the team is evolving. It is fair to say that the head coach’s attitude has struck the wrong chord among Kiwi rugby supporters.

Ian Foster is not the man to lead a revolution. As the anointed successor to Sir Graham Henry and Sir Steve Hansen, he can be a force for continuity, the coach to tweak the systems handed down to him. There will be no dramatic changes in either strategy or personnel while he is at the helm, and improvement will be measured in small increments.

But with most of the rugby public in New Zealand having grown up in a golden age of 80 to 90 per cent success, the expectations are far, far greater. The cards are falling out on the side of revolution rather than evolution – at least at international level, at least for the All Blacks. Some more fundamental change is needed for New Zealand rugby to kick on – new ideas, fresh thinking, radicalism, not conservatism.

Sam Cane was a worthy successor to Sir Richie McCaw, and there can be no higher praise than that.

The choice of captain is subject to the same-sea-change. Sam Cane has been groomed for the role of skipper for a number of years, but an unfortunate series of injuries at the wrong stage of his career has thrown a big spanner in the works.

At his peak, Cane was one of the very best number 7’s around, anywhere in the world: powerful, dynamic, a real fireplug. He was a threat on-ball at the defensive breakdown, and he cleaned out attacking rucks with conclusive power. His defensive work-rate was immense and his hitting power at the tackle was game-changing. Sam Cane was a worthy successor to Sir Richie McCaw, and there can be no higher praise than that.

He came back from a broken neck suffered in a match against the Springboks in 2018, an injury described by the player himself as ‘a couple of millimetres away from never playing again’, in time to play a part in New Zealand’s World Cup campaign one year later. In 2021 he suffered a serious chest injury which cost another six months, another major operation and knocked him out of the Rugby Championship.

There are only so many hits a fighter can take before entropy sets in, and the recent signs suggest that Sam Cane may have reached that point. In the July series against Ireland, he came off second best to Josh van der Flier by a distance. The Leinster man had more carries (26 to Cane’s 14) with the significant outcomes – tackle busts and break assists – three to one in van der Flier’s favour. On defence, the Irish flanker completed 62 of 63 tackle attempts with three turnovers. Compare that to Sam Cane’s figures: 41 of 43 tackles completed, with only one turnover won.

The writing was on the wall, and it was confirmed by events at Mbombela stadium in the first round of the Rugby Championship. Cane’s on-ball production has declined steadily. He won one turnover on the ground in three matches against Ireland; he conceded one penalty for ‘no release’ in eight on-ball attempts versus the Springboks, without anything to show on the positive side of the ledger:

The synergy between Ardie Savea and Sam Cane in the back row is not obvious. Ardie won lineout ball from the front against Ireland and the Boks (9 takes in total), Cane picked up one throw over the back. Ardie is the main forward ball-carrier, with 124 metres on 32 carries in two-and-a-half matches against the Irish, and 16 significant outcomes, compared to 27 metres and none for Cane. Savea also has more pilfers on the ground than the Chiefs man over the four matches (three for Ardie, one for Sam).

Although Sam Cane has made more tackles (51 to 38 by Savea) it is not enough to disturb the impression that Ardie is doing the work of at least one and a half men. Take a look at this early sequence inside the All Blacks 22 in Mbombela:

Over the seven phases that this South African attack lasts, both Cane and Savea make one tackle apiece, and have one shot each at the ball on the deck. But when the All Blacks regroup after each phase in defence, it is Ardie who is playing as the wider of the two back-rowers. Where Sam Cane sits in at first defender out from the ruck on five occasions, Ardie Savea gets further out, to second defender on four: 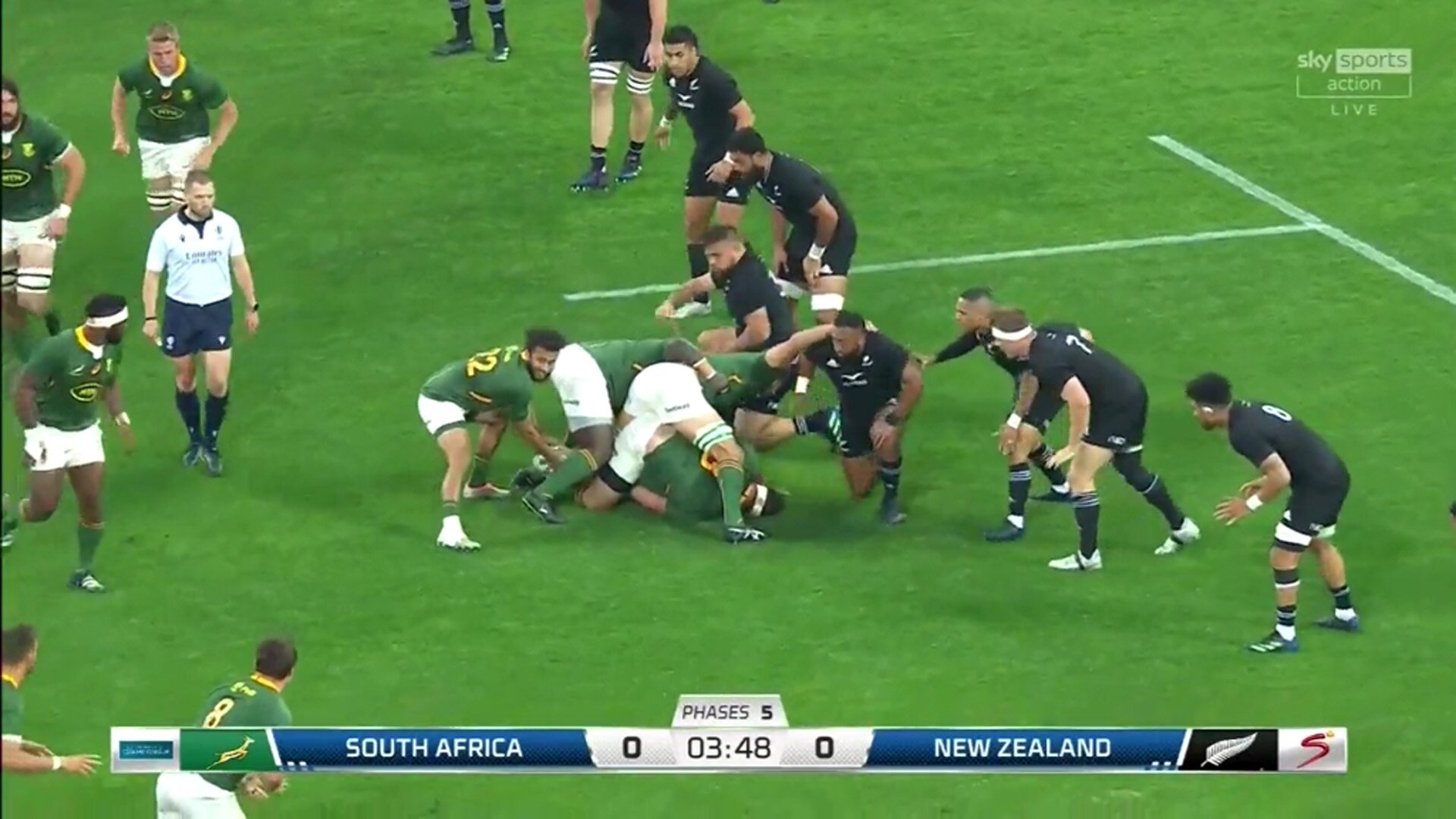 When the Boks finally shift the ball wide, there is only New Zealand back-rower in the picture, and it is Ardie Savea: 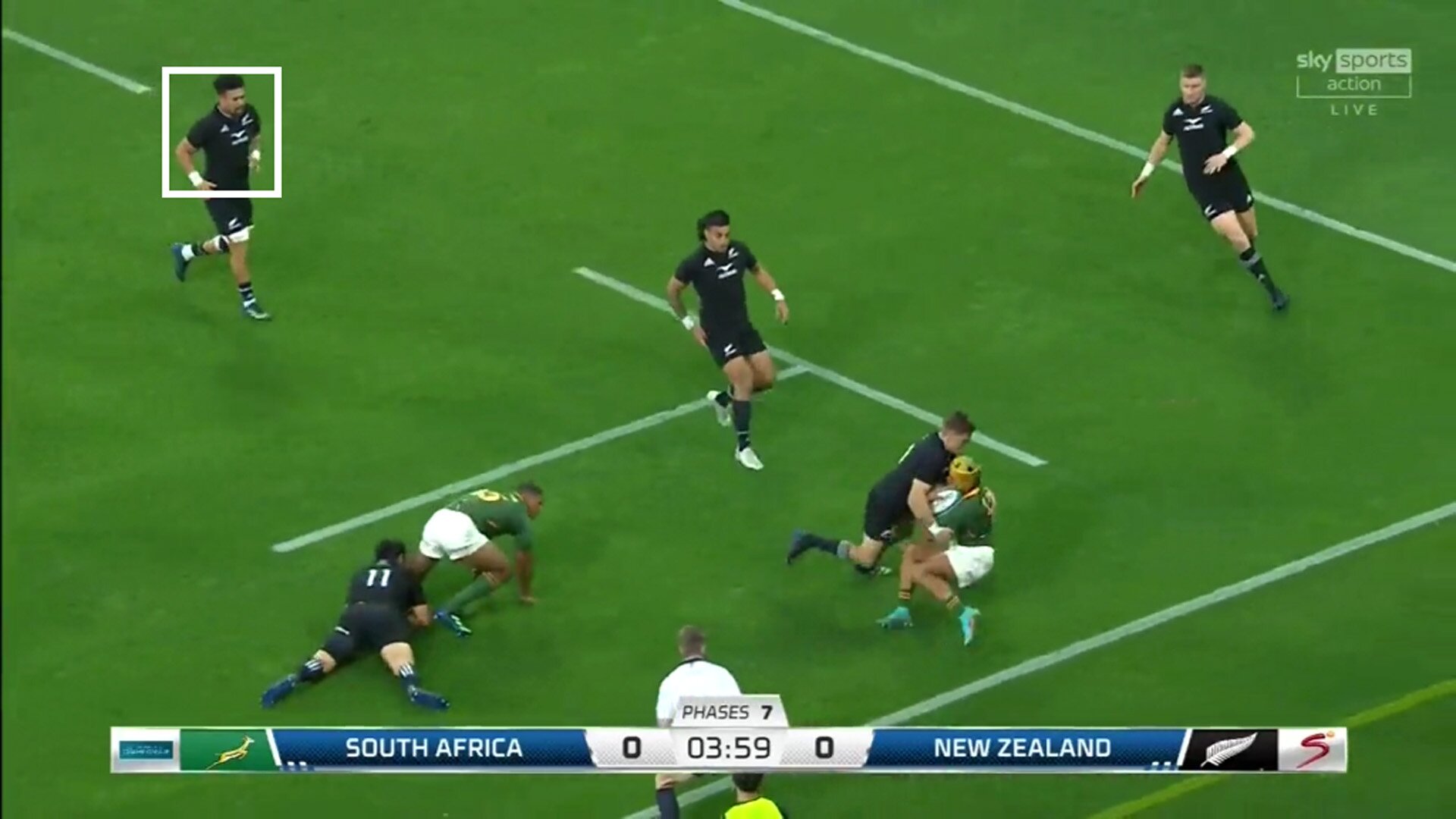 If your number 8 is going to defend closest to the backs, it does raise a question about the construction of your back-row: what is the role of your number 7 in this picture?

With Sam Cane running for 27 metres against the Irish and one metre at the Mbombela stadium, defences are tending to write him off as a runner and flood through on to the man outside him:

In this type of situation, the All Blacks may do better to move Ardie to number 7, or bring in an openside flanker who is a genuine threat to fix the defence by running the ball, like Dalton Papalii of the Blues, or Ethan Blackadder of the Crusaders.

It was surprising just how many of the scenarios at the Mbombela resolved into one-on-one contests between Sam Cane and Springboks strongman Malcolm Marx. Cane brought back memories of his very best work with one hit on the South African hooker:

That turnover was outweighed by three occasions where the New Zealand captain was unable to prevent Marx from the pilfering ball from the All Blacks’ breakdown:

The last instance is especially brutal: Cane has the angle to remove Marx from the equation, but the Bokke rake is just too powerful and the New Zealand skipper just bounces off him in contact.

Ian Foster is still busy insisting on the evolution of his team, but the way in which events are unfolding in two key areas – the combination in midfield and in the back-row – suggests that a revolution in thinking is needed. The mix at numbers 6, 7 and 8 is not right, and probably never will be as long as both Ardie Savea and Sam Cane are seen as essential elements of it.

Savea is currently the best player in Aotearoa, so the focus will inevitably fall on Sam Cane’s position as captain and incumbent number 7. If Savea stays at 8, would New Zealand not profit from a bigger body who offers more at the lineout lineout and on the carry? If he shifts to 7, it creates room for another specialist like Hoskins Sotutu of the Blues, or Marino Mikaele-Tu’u of the Highlanders. Either option offers better balance than what the All Blacks have now.

It is time for protests in the street and fists pumping the air – Vive la Révolution!