RUGBYPASS+ How Joe Schmidt will make his mark on All Blacks

By Nick Bishop
How Joe Schmidt will make his mark on All Blacks
By
Nick Bishop
6 months ago
InternationalBluesIreland
12:10pm, 31 May 2022 11 Comments

Christmas came early for the All Blacks in December 2021, when it was announced that ex-Ireland and Leinster head coach Joe Schmidt would be added to the national think-tank as an independent selector. The gift came fully wrapped with bow – sounding less like a distant advisory role, and much more of a root-and-branch overhaul of Ian Foster’s entire operation.

Schmidt appeared like a teaching evaluator, sitting at the back of the class and making notes, perhaps even with the odd disapproving shake of the head. He started with his course on the background to good selection practice:

“Having done your homework [is important], for starters.

“I’d be a little bit of an analyst geek, so far as looking at players and making sure that I knew a fair bit of how they play the game and, as much as possible, who they are, because you tend to play a little bit like the person you are.

“So, when you try to build a profile and a set of combinations, I think being really thorough is the first thing.”

“As brutal as that sounds, one of the things about a selector is if you compromise the team to make a selection based on loyalty, or based on something that’s not maybe in the best interests of a team, then the team members see through that pretty quickly and that can be complicated in an incredibly interdependent environment.”

Those comments bear all the hallmarks of a new broom sweeping clean, rather than a humble assistant adding the odd whisper or suggestion from an anonymous corner of the room.

Joe Schmidt once referred to himself as ‘a very small cog’ in the wheel of Irish rugby, but the players themselves certainly did not experience it that way. Nor did the coaches and administrators in Ireland’s four provinces. His influence was felt in every aspect of development across the country – mostly for the good.

The players themselves were never in any doubt about who was in charge. They felt the full fury of the headmaster when things went wrong, or when enough attention was not being paid to the small micro-moments, on and off the field. As the ex-Leinster and current Ireland scrum coach John Fogarty commented:

“When Joe came in, the team was feeling pretty good about itself, we had won [the Heineken Cup] and got to a semi-final the following year. We had under-performed at the end of the previous season, despite getting to the Pro 12 final, but we were missing Johnny Sexton so there were a number of excuses we could have used, and we did use those excuses.

Schmidt’s obsessive attention to detail would be appreciated and feared in the same breath by Ireland squad members of the recent past.

“Joe smashed through all that nonsense. He was very direct in how he spoke and everyone understood really, really quickly what he was about and that you are not going to get away with that attitude around him. Very, very early on you had a clear understanding what type of person he was and how he was going to deal with you – very straight and direct.”

It was Joe Schmidt’s way or the highway, and that will mean a ferocious new energy introduced into the New Zealand national rugby environment. The process of adjustment will be transformative rather than progressive, and it may well be the case that Schmidt finds it difficult to slot himself in anywhere other than near the pinnacle of the pyramid.

Schmidt’s obsessive attention to detail would be appreciated and feared in the same breath by Ireland squad members of the recent past. As ex-Ulster second row Dan Tuohy recalls:

“I’d use [openside flanker] Chris Henry as an example. A lot of the time he was in shape but he didn’t look in shape. He was fit as anything, but he looked like a bag of shit.

“Chris would be at dinner and not sure if he could have ketchup with his food. There was always this element of hiding things, or having a dessert and Joe would always be watching you.

My own experience helping prepare England for the onslaught of Joe Schmidt’s Ireland under Stuart Lancaster was certainly interesting. We won four of the five games played between the countries between 2012 and 2015, but there was always a distinct flavour, and unusual intensity associated with those matches.

It was like playing rugby in a pressure cooker, with one error likely to make the pot boil over. There was a constant aerial bombardment in the shorter contestable zones, and between 75-80 per cent of the Irish attacking play came off 9, rather than 10 or 12. In one season we counted only five offloads in an entire Six Nations, with hyper-accuracy at the ruck the preferred method of recycling the ball.

“I remember at one meeting he [Joe Schmidt] said ‘Do not offload, you haven’t got the skills to offload’. And this isn’t just me, it’s the whole squad [that Schmidt was talking to].

“’You can’t offload, unless it’s 100 per cent, don’t bother doing it. Just get the ball back and we’ll keep the ball.’ So, guys were just petrified to offload the ball.”

In one fabled Six Nations game against Wales in 2017, Ireland built 142 rucks and forced Wales to make 208 tackles, but Wales still won the match ultimately by 22 points to 9.

On attack, Ireland were only really dangerous over the first four or five phases, where Schmidt had devised a sophisticated network of moves designed to expose the interior defence near the side of the ruck.

Let’s take one example of a multi-purpose lineout strike package Schmidt loved to run with Leinster and Ireland. It comes from the classic end-of-year tour game against the All Blacks: 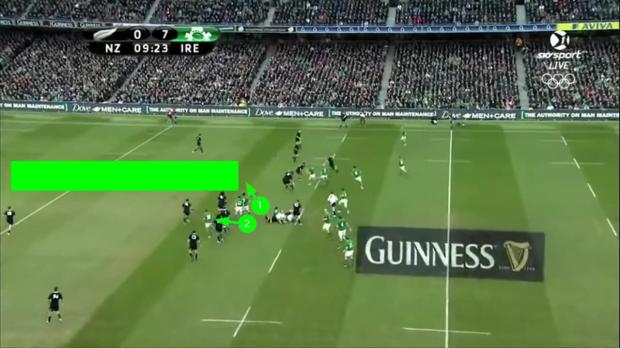 From a lineout launch near halfway, the ball is brought into midfield on a carry from number 8 Jamie Heaslip, and there is an extra late bump on Aaron Smith at the side of the ruck by prop Mike Ross. Schmidt’s teams laid great store on using the cleanout at the ruck to split the defence into two parts, and all of the subsequent play will be made down that narrow green funnel between the near 15-metre line and midfield.

Second phase comes back to the near-side, with scrumhalf Conor Murray using a forward (hooker Rory Best) as the ‘post’ with a number of passing options around him

In this instance, Best pirouettes before delivering a pop pass to prop Cian Healy outside him. The offload is only made off the ground when it is 100 per cent certain to succeed, with the ball carrier well past the tackler. When Heaslip receives the ball for a second time, he doesn’t think about shifting the ball wide, he returns to that same narrow channel of attack. The keynote is, again, work on angles at the ruck, with Healy not satisfied with neutralizing his man at the cleanout, but taking him inside and away from the intended channel of attack, while Paul O’Connell advances ahead of the ball on the other side of the breakdown. The scene is set for another bust straight up the middle by Sean O’Brien, and Ireland scored a couple of phases later in the same channel. Six phases in total, all in the creative ‘funnel’ between midfield and the 15m line.

A few months later in the Six Nations, Ireland scored again from a variation of the same move: It is the same move used against the All Blacks, but this time with Heaslip as the ‘post’ as Murray circles around him. The option chosen is the in-pass to fullback Rob Kearney, coming from a hidden spot directly behind the ruck, with O’Connell carefully positioning himself in between Kearney and the likeliest tackler Joe Launchbury. We knew it was coming, but the accuracy was such that we could not stop it.

All Blacks supporters are going to notice a lot more attention paid to that channel of attack five metres on either side of the ruck later in 2022. That is where the Schmidt influence will be felt most keenly on attack. Arguably, it has been felt there already:

Big wingers like Julian Savea or Caleb Clarke (here, for the Blues in their game versus the Brumbies) will be coming straight ‘up the pipe’ on first phase. They will track their number 9s religiously through phases, in order to straighten the attack with short busts up the gut: The Highlanders’ wing Scott Gregory is sitting on the inside shoulder of his number 9 Folau Fakatava, and he reaps the reward in the second clip with a helping hand from his cleanout, via an O’Connell-like intervention splitting the defence right up the middle.

There will also be more emphasis on dragging the interior defence out on to the first receiver before shifting the ball back towards the channel of attack near the ruck:

In both cases Hurricanes’ number 12 Jordie Barrett is a key player, and he is likely to be just as important to the attacking success of the All Blacks in the second half of 2022.

There is no doubt that it will be impossible for Joe Schmidt to keep a low profile as a New Zealand selector. Everything about his history in Ireland speaks against it, and suggests that he will become a significant, if not a controlling influence in the All Blacks’ hierarchy. There will probably be an increased volume of kicking, more ball control at the ruck and better detail at the cleanout; less automatic play to width, and much more dirty work up the middle.

It may take Kiwi supporters some time to get used to the ‘new way’.