The Rugby Football Union in England have turned missing the boat into something of an art form ahead of World Cups. It has become a thoroughly bad habit.

First, they failed to pick up Shaun Edwards, out of contract with Wales after 2019 and looking for a long-term deal which he eventually negotiated with France.

In fact, they missed out on Edwards not once or twice, but on three separate occasions, most recently when his contract with France was up for renewal at the end of 2022. The best defence coach in the world is now tied to Les Bleus until the end of the next World Cup cycle in 2027.

“Fabien Galthie asked in September if I’d be interested in staying on for a few more years [with France], and the FFR followed up by putting a long-term contract in front of me,” Edwards said upon his latest contract renewal.

“It’s all done and dusted, so now I can just focus on my job. In modern sport, experienced coaches always plan a year or two ahead. You need to provide security for your family and France acknowledged that by getting the deal done quickly.

“People have asked if I wanted to join England, but there was no offer on the table. I went for a walk down the River Thames with Bill Sweeney, the RFU CEO, last year but there’s not been much conversation since. It’s not for me to push that.”

He’d made the same answer in almost the same words, when asked a similar question by an inquisitive BT Rugby Tonight panel nine months before. Edwards revealed his desire to coach in the English national set-up after the 2015 World Cup:

“You’d have to be asked first.

“I fancied going there [to England] definitely, after they got knocked out of the World Cup, when they didn’t make the last stage in 2015.

“I looked at the Saracens players all coming through, and to me it was an absolute no-brainer that they were going to win some Six Nations competitions, in the forthcoming, what I call four-year cycles.”

Warren Gatland was popularly supposed to be a major contender for the England job after Eddie Jones was sacked before Christmas, but he ended up returning to his old stamping ground in Wales instead. Gatland enjoys nothing more than beating the English in the games that really matter, whether it is in the Six Nations or at the World Cup.

Meanwhile, the four English coaches who presided over the 2015 debacle, during which England lost a crucial group game to a Wales side overseen by Gatland and Edwards, have all gone on to greater things by leaving the country and adopting Ireland as their rugby homeland.

Andy Farrell is now the head coach of the number one ranked rugby nation in the world, with Stuart Lancaster providing most of the IP bullets Farrell fires at national level via the cutting-edge systems he has developed and implemented at Leinster. Mike Catt has graduated as Farrell’s attack coach and Graham Rowntree is ensconced as the new head coach of the West Coast powerhouse, Munster.

The best English coaches seem to thrive by living and working outside the country as contemporary sporting ‘wild geese’. Now the most recent coach on the RFU’s ‘not wanted’ list, Eddie Jones, has been signed, sealed and delivered as the new coach of the Wallabies within the last week.

With England due to face off against one of either Wales or Australia at the quarter-final stage in France, it is an uncomfortable prospect. Both Gatland and Jones will have a point to prove, and they will want to prove it in the most emphatic manner possible against the Red Rose.

Steve Borthwick will be especially worried about playing an Eddie Jones-coached Australian side in a knockout match, with no second chances. Jones knows all of the England players inside out, and he will know Borthwick’s rugby mind and tendencies particularly well. The ex-Bath man was his forwards assistant between 2016 and 2020 with England.

The Wallabies also have far more potential to develop quickly over the next eight months than Wales. They toured the UK and France in November with several of their top players either out injured, or unavailable for the end-of-year trip. Jones will be looking to squeeze more quality time out of the likes of Angus Bell, Matt Philip, Taniela Tupou and Will Skelton up front; and Quade Cooper, Samu Kerevi and Marika Koroibete behind in a World Cup year.

The nation which gave us Mark Ella, Michael Lynagh and Stephen Larkham is currently experiencing rugby’s equivalent of a black hole in the key playmaking position.

If Eddie can get that group playing together, injury-free for seven weeks in September/October, he will be on to something. But by far the single most pressing need is the presence of Quade Cooper to navigate Australia around the paddock from number 10.

The nation which gave us Mark Ella, Michael Lynagh and Stephen Larkham is currently experiencing rugby’s equivalent of a black hole in the key playmaking position. The Wallabies have had to reach back in time for Quade and Bernard Foley because of the dearth of young 10s ready to take the next step up to international football.

Larkham and Ella were always the fulcra of attacking play for their teams, but Foley only received the same number of touches at first receiver in the entire game against France as Will Skelton achieved in 26 minutes off the bench. Fast forward to the following week against Italy in Florence, and a lock (Skelton) and inside centre Hunter Paisami had the majority of touches at first receiver, with seven apiece.

The contribution of the most likely lad among the younger crop of Australian outside halves, Noah Lolesio, paled in comparison to his opposite number, Tommaso Allan. Allan is only the reserve outside half at his club Harlequins and plays second fiddle to England’s Marcus Smith, but Italy trusted him to steer their ship:

Allan enjoyed twice the number of touches of Lolesio in fewer playing minutes. Italy were granted the ability the attack wider and earlier by his aggressive positioning close to the advantage line:

The Azzurri number 10 is willing to take a painful hit from the giant Skelton in order to commit the interior defence and create space for his outsides later in the play.

At present, the Wallabies can only get this kind of positional aggression from their number 10 when Quade Cooper is starting the game, but they have to go all the way back to 2021 to find it. The four Rugby Championship games against South Africa and Argentina are the last time that Cooper was regularly in the pivot role, and Australia won them all.

It is Cooper’s willingness to move up to the line and engage the defenders opposite him which makes all the difference: 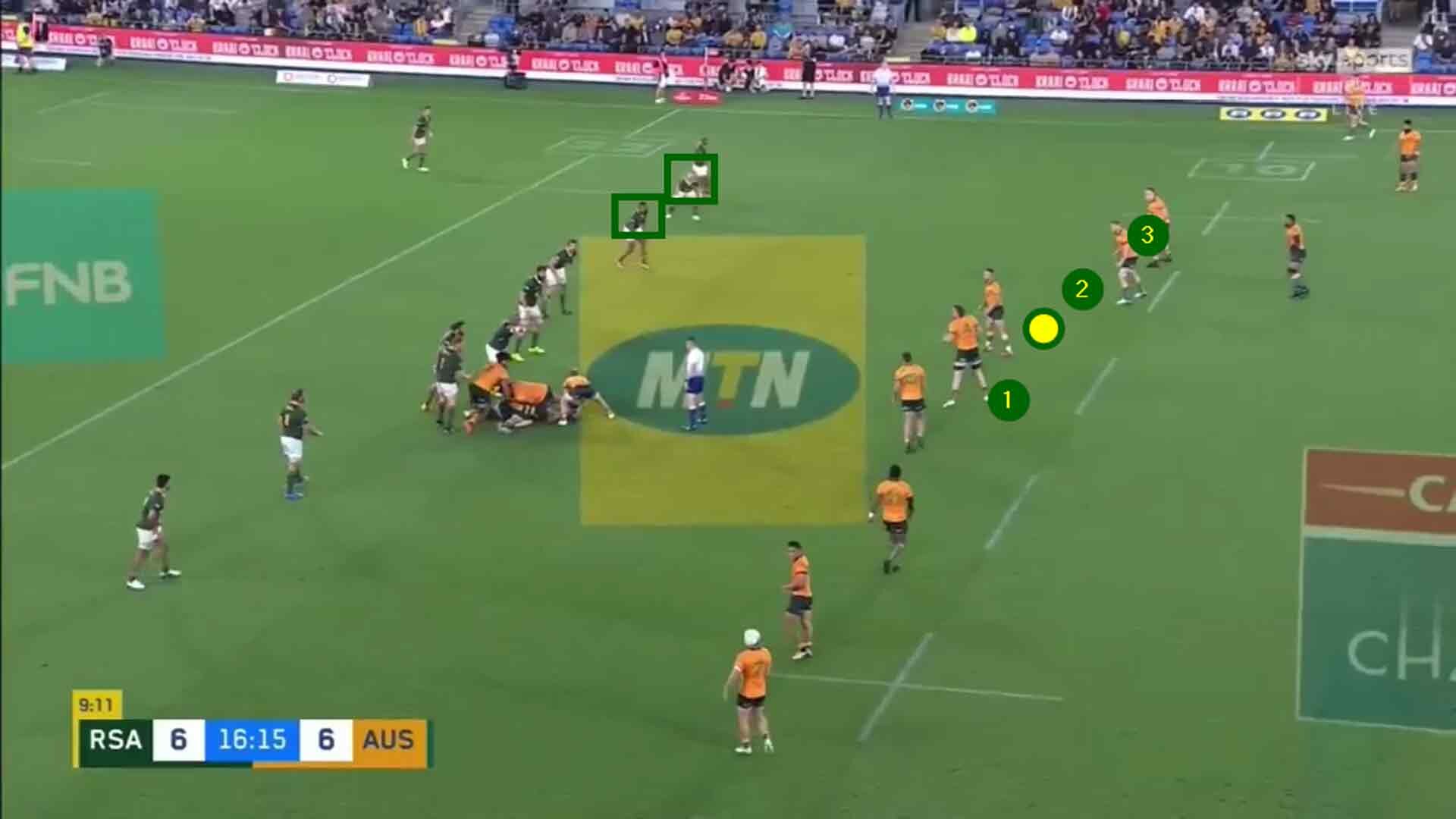 Cooper times his approach to the line exquisitely. Typically, the three Australian forwards around him would be standing in a line ahead of the number 10, but Cooper has judged that the moment is right to engage the two key Springbok defenders (Lukhanyo Am and Faf De Klerk) with reduced response time. He gets the pass away a mere fraction of a second before receiving a heavy hit from South African second-rower Eben Etzebeth.

The Queenslander’s knack for sensing the right moment to move up to the line was in abundant evidence in the double-header versus the Pumas: 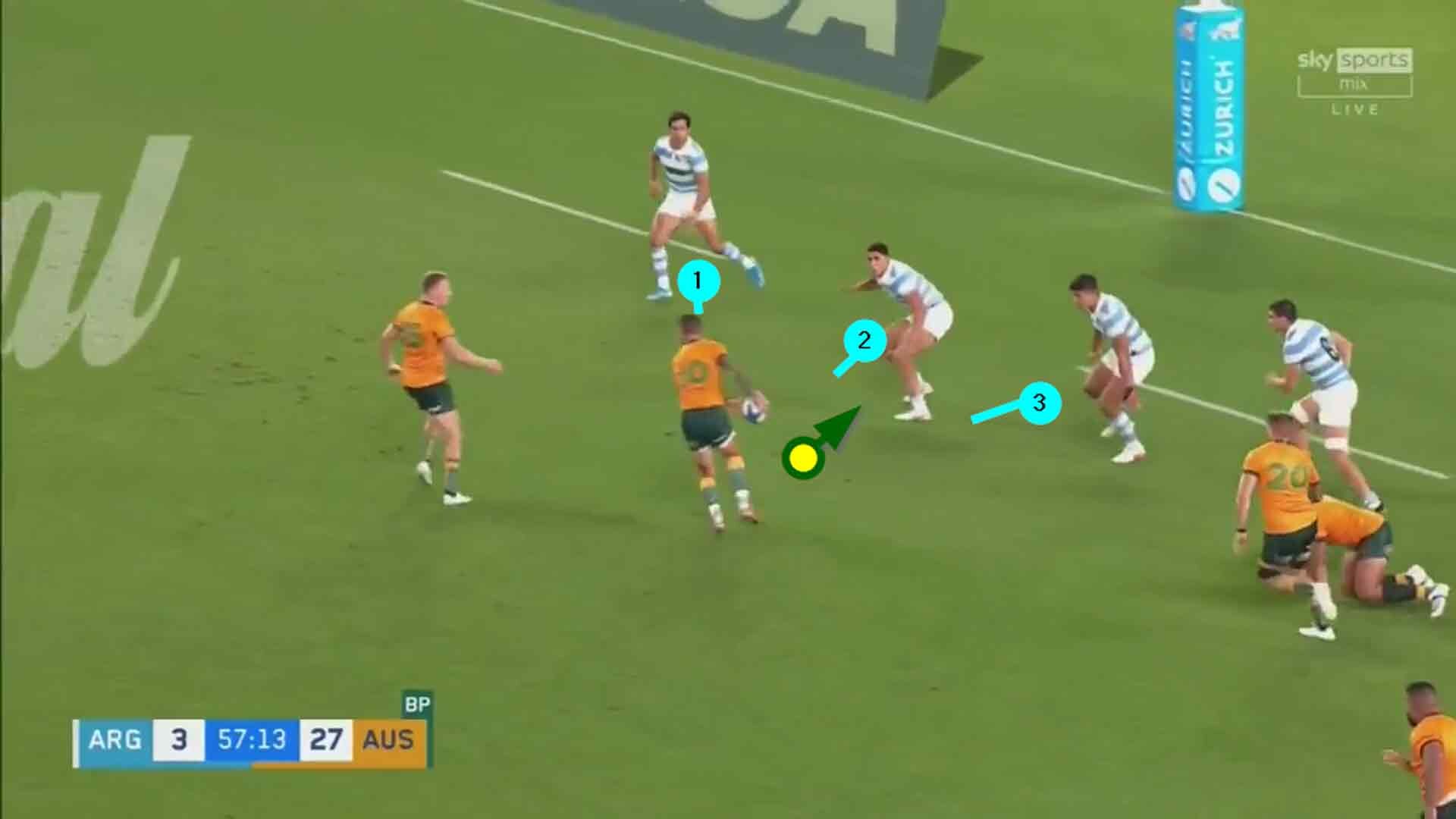 It all looks so simple in practice, but it is a refined positional sense which achieves that simplicity. Quade advances to the line and stays square for just long enough, so that all three of the Argentine defenders directly opposite have eyes only for him. Only then does release the pass, and only then do Len Ikitau and Andrew Kellaway find the space to convert the opportunity.

Cooper uses the double-pump action on the pass to achieve the same aim of fixing the defence, forcing it to ‘plant’ and create a clear target: 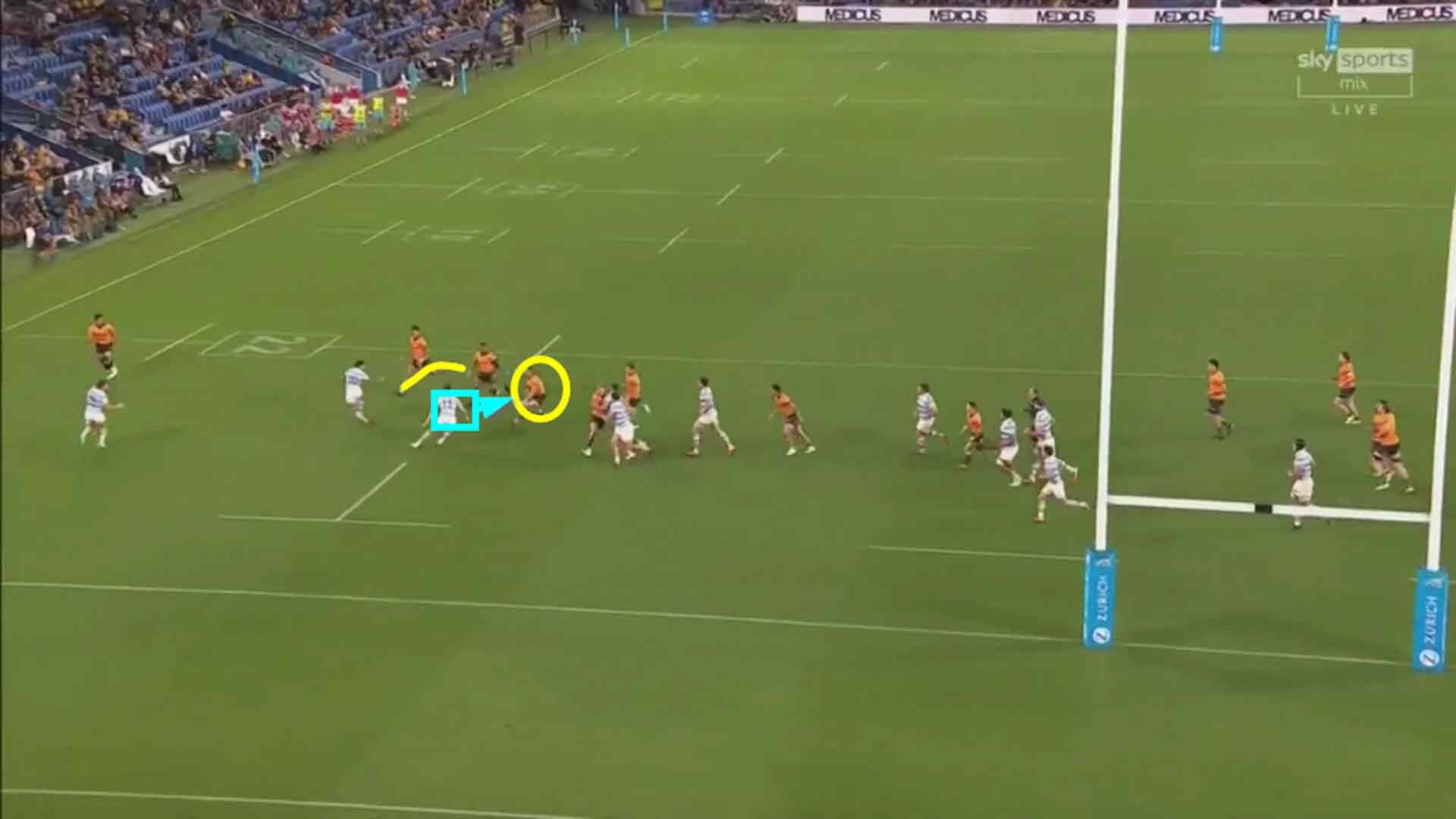 The action of the double pump brings Quade closer to the advantage line and attracts the defender towards the ball-in-motion. The potential overload in numbers is there, but Cooper still has to lever a gap open for Samu Kerevi outside him. He only releases the pass when he sees the defender’s body-lean and planted feet committing towards him.

One year later in Mendoza, he was at it again versus the same opponents:

The delivery to the try-scorer (Jordie Petaia) is never released until the defender marking him can no longer make up ground to complete the tackle. Quade Cooper is quite capable of delivering attacking kicks from a similar position close to the advantage line:

When he first entered the international stage, much of Quade Cooper’s play was ego-driven – the striving for the spectacular, the miracle ball when sometimes, just a well-executed ‘ordinary’ pass would do. The big change is in the maturity of his attitude, dragging attention towards himself in order to create opportunities for others. It has been an impressive shift, as much in personality as in skill set.

Eddie Jones will be praying for Quade and waiting anxiously on his physical fitness for the World Cup, because there is very little behind him. The Australian production line at number 10 has stagnated. If Quade Cooper is available for selection, England had better watch out at the quarter-final stage of the competition. Either one of Eddie Jones or Warren Gatland will be smelling blood in the water.

If the Red Rose loses to Australia or Wales, there will another painful, and painfully public inquisition about English rugby’s facility for exporting its most outstanding coaches to rivals overseas. Coming hard on the heels of two decades of under-achievement at World Cups, that will not be a pleasant watch.