RUGBYPASS+ Can Schmidt lead All Blacks to promised land after Christchurch crisis?

By Nick Bishop
Can Schmidt lead All Blacks to promised land after Christchurch crisis?
By
Nick Bishop
4 months ago
The Rugby ChampionshipArgentinaNew Zealand
8:36am, 30 August 2022 6 Comments

During one of the lulls in the action in the third-round Rugby Championship game between the All Blacks and Pumas in Christchurch, the camera shifted uneasily between the three coaches now entrusted with the future of New Zealand rugby.

On Ian Foster’s left sat former Crusaders forwards coach Jason Ryan. Ryan has had an evident and immediate impact on the All Blacks’ scrum and maul over the past two matches. On Foster’s right was Joe Schmidt, who by all accounts has been dragged, kicking and screaming, from the background into the spotlight as the new attack coach.

It looked like what it was – a wordless pact between three men who hardly know each other, or at least the real germ of each other’s philosophies about the game when the heat comes on. Good things take time, and the patience needed to meld those different patterns of thinking together is no different.

The match provoked an interesting debate between Sir John Kirwan and Jeff Wilson on the most recent episode of Sky Sport’s The Breakdown. It was about what constitutes ‘control’ in rugby.

“We were in control of that test match,” said Wilson. “We were up by six points, we miss a single kick-off which leads to them going in front.

“In the first half we were in control of that test match. The only opportunities they were getting to score points were from our ill-discipline.”

Kirwan had other ideas: “I disagree, we weren’t in control, we were never in control,” he said.

“We weren’t in control of the scoreboard because you’ve got to be fifteen points ahead of any team to be in control now.”

Both men had some raw stats going for them. Here are the stats which support Wilson’s interpretation:

Now here is the ‘skull beneath the skin’ – stats which favour Kirwan’s judgment:

Kirwan finished by adding a telling point of comparison: “If you looked at that game yesterday, it was exactly the same loss that we had last time [in 2020].”

The match he was referring to is New Zealand’s historic first loss to Argentina at the Western Sydney stadium, by 15 points to 25. At the time, I wrote an article on the game which is as relevant to the issues the All Blacks are experiencing now as they were two years ago. Even the title is appropriate.

The start-point for that article was the 2013 end-of-year tour game between Ireland and New Zealand in Dublin, which climaxed in a superb 13-phase score by the All Blacks to win the game with the clock already in the red.

Back in the day, the All Blacks used the old Canterbury 2-4-2 attacking system with two forwards routinely positioned in each wide 15 metre channel:

Kieran Read and Dane Coles are playing out on the left, with Richie McCaw and Liam Messam out on the opposite flank in those two clips, and it is Coles who gives the final pass to Ryan Crotty for the try.

In that 13-phase scoring sequence, the All Blacks entered one of the two 15-metre channels on five occasions and made the second pass on nine phases. Yes, it was a desperate, last-ditch situation and yes, defence is better now than it was then. But, at the same time, that sequence distilled the essence of what New Zealand rugby was all about in that era. It took two passes to get the ball from one edge into centre-field, and another two to reach the far sideline. The All Blacks’ badges of honour were mobility across the width of the paddock, and a wider-ranging skill-set with hands and feet out wide.

The Ireland coach on that tumultuous day in Dublin was none other than Joe Schmidt, and he was also responsible for the New Zealand attack in Christchurch. The unmistakable flags for Joe Schmidt attack were all there, the same ones that I pointed out in this article .

Joe Schmidt’s attacking philosophy is all about creating pressure via ruck-building: “In one fabled Six Nations game against Wales in 2017, Ireland built 142 rucks and forced Wales to make 208 tackles, but Wales still won the match ultimately by 22 points to 9 [from the original article].” Tick. Against Argentina, the All Blacks built another huge number, 121 rucks.

“All Blacks supporters are going to notice a lot more attention paid to that channel of attack five metres on either side of the ruck later in 2022. That is where the Schmidt influence will be felt most keenly on attack.” Tick. 95 of those 121 phases were only zero, or one-pass phases (including in-passes off first receiver). 78.5 per cent of one-out football is very high. It is not typical New Zealand football, but it is typical of Joe Schmidt.

“Big wingers like Caleb Clarke will be coming straight ‘up the pipe’ on first phase. They will track their number 9s religiously through phases, in order to straighten the attack with short busts up the gut”. Tick. The New Zealand back three had 23 carries for 139 metres, and much of that work was done within five metres of ruck-side.

If the predominance of one-out attack explains New Zealand’s control of the pill, its repetitiveness also explains Argentina’s high tackle completion rate and ability to turn over ball, and draw penalties at the breakdown. Control of the ball does not always equate to control of the game.

That control tends to manifest in practice as a big increase in switches, cutback runs and in-passes:

It’s a first-phase kick return and Will Jordan switches inside Jordie Barrett to accept the in-pass. Unfortunately, it also brings the ball back directly towards two of Argentina’s big on-ballers, Julian Montoya (three steals) and Pablo Matera (one): 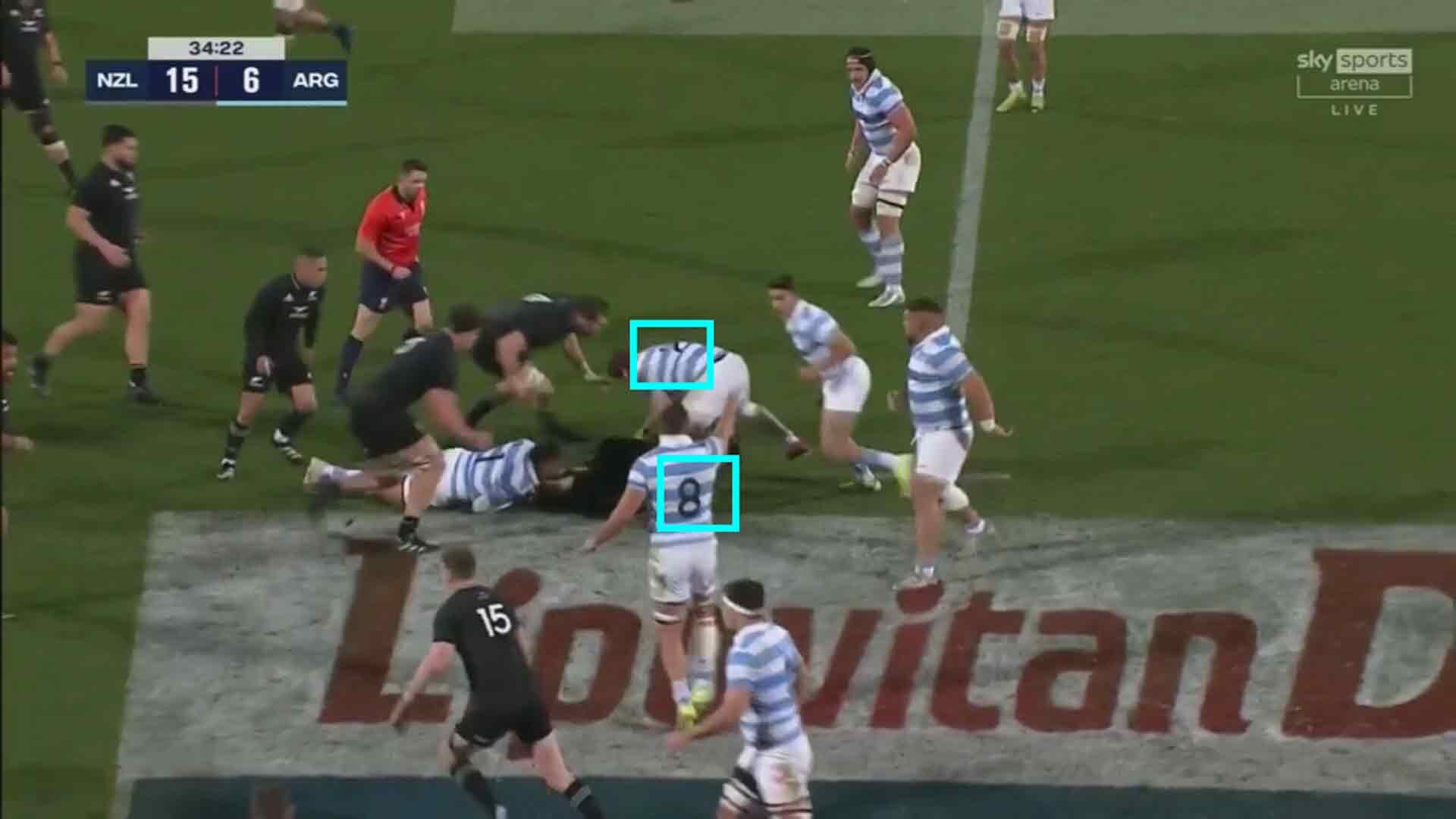 After enjoying a romp in the open spaces at Ellis Park two weeks earlier, Sam Cane found himself asked to carry and clean out in midfield again:

There was even a noticeable change in the usage of centre Rieko Ioane, who was required to carry back towards the ruck on an angle:

Shannon Frizell makes good ground up the middle on a pick and go, but the next play still brings back Ioane on the angle towards Argentina’s tackling hero on the day, Marcos Kremer, who made a massive 26 stops. The predictable outcome is another turnover by number 12 Matias Orlando.

The most successful sample of the Joe Schmidt attacking philosophy occurred in the 26th minute, with the All Blacks moving from one 22 to the other in 17 phases of play and winning a penalty at the end of it. 14 of those 17 phases were one-pass.

Once again, Rieko Ioane was used on the angle:

Rieko immediately straightens his line, tucks the ball under one arm and puts his head down in expectation of contact. There is no question of a ball behind to the waiting Jordie Barrett.

The problem with employing your centre and back three on the inside track continually is that the attack shortens up while the defence maintains its width: 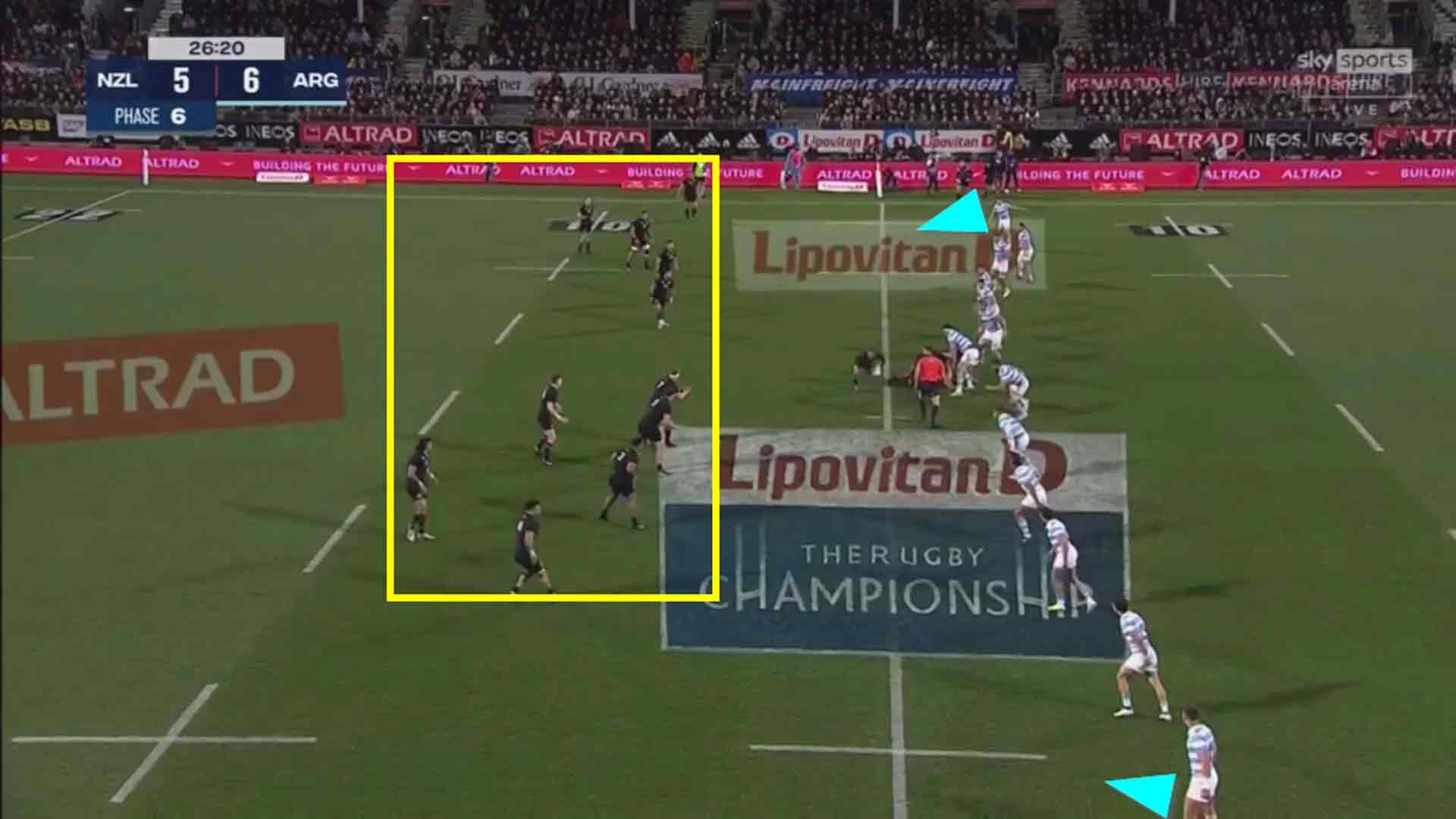 Three men are attending the ruck plus Aaron Smith at the base, with the rest of the attacking players concentrated in one half of the field.

As the sequence wore on, the New Zealand back three moved further and further inside to play off Smith at the base: 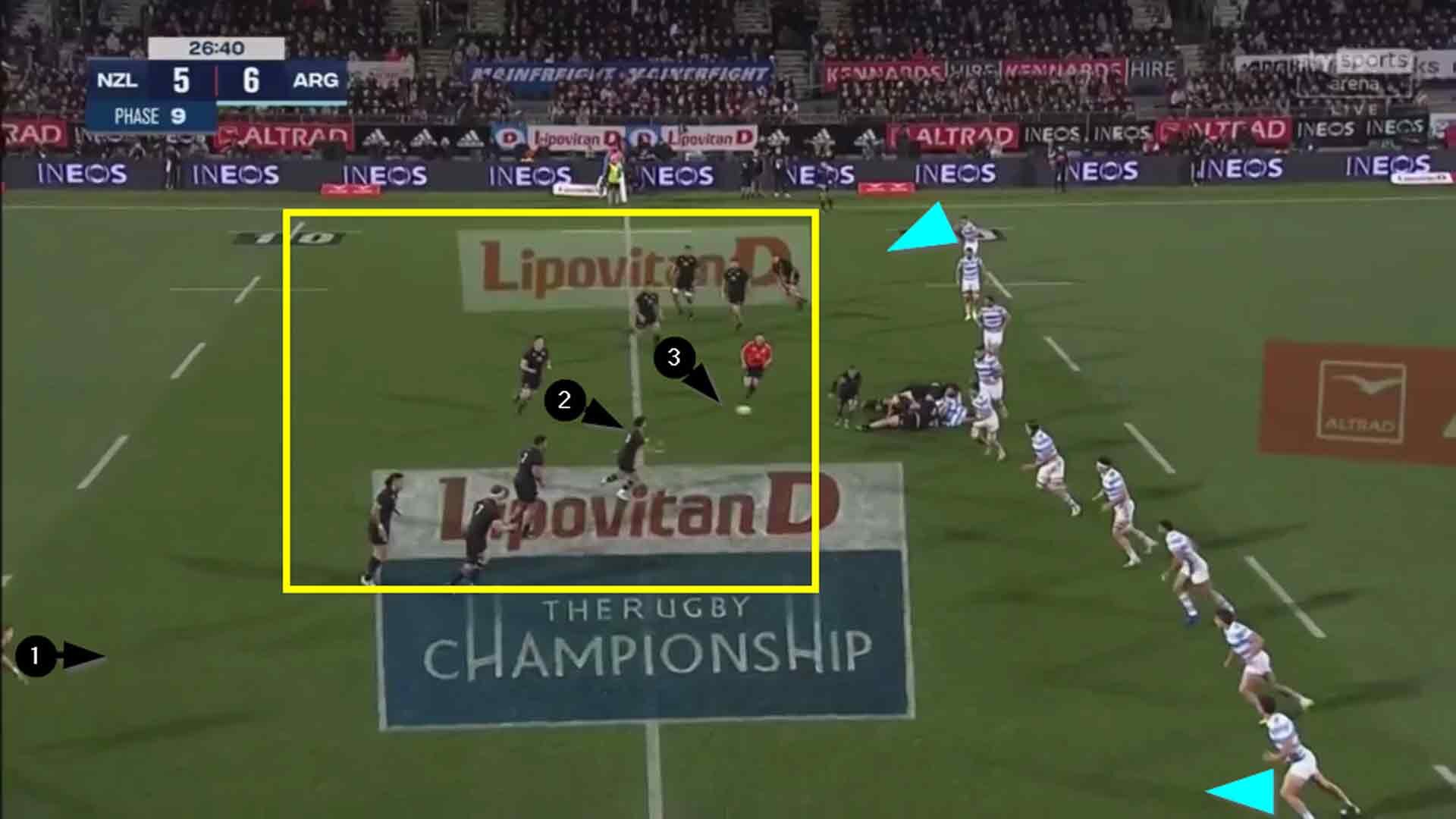 In the first screenshot, only Jordie Barrett is outside the attacking ‘box’. By the end of the 11th phase, Caleb Clarke has been consumed on a one-out play, Rieko has made another angled run with Jordie cleaning out over the top of him, and Will Jordan is playing in the middle of the field: 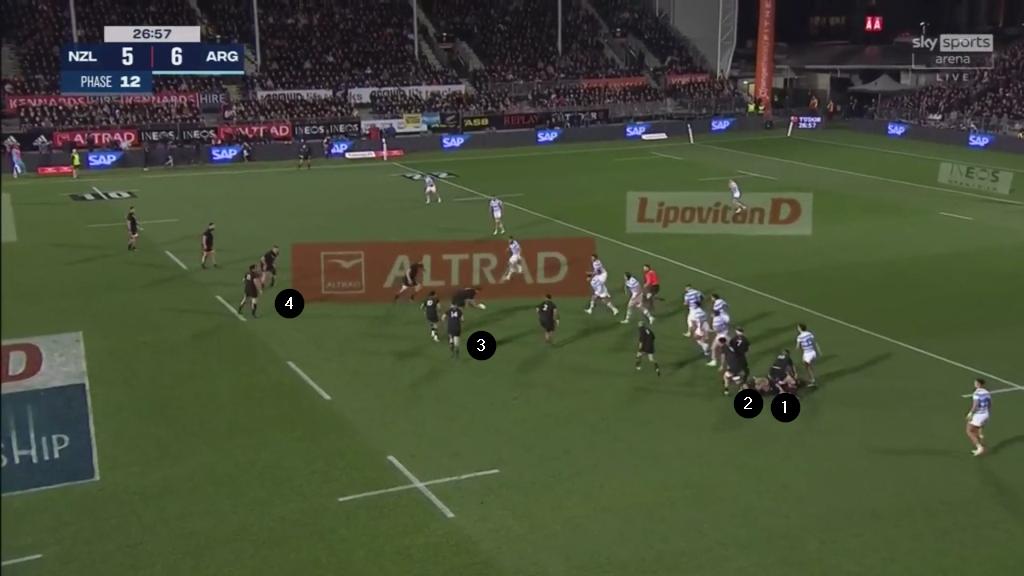 Although the All Blacks controlled this sequence, the signs are already there that the Pumas would control the fate of the game through their ability to keep width better on defence than New Zealand could manage on attack.

Ironically, the best New Zealand try of the game originated from a turnover where they attacked in more traditional fashion, making the second pass instantly and using Ioane and their back three in the wide channels:

The previous article concluded as follows:

“There is no doubt that it will be impossible for Joe Schmidt to keep a low profile as a New Zealand selector. Everything about his history in Ireland speaks against it, and suggests that he will become a significant, if not a controlling influence in the All Blacks’ hierarchy. There will probably be… more ball control at the ruck, less automatic play to width, and much more dirty work up the middle.

It may take Kiwi supporters some time to get used to the new approach.