“It’s really simple for me, I love rugby and I don’t think rugby has a gender.”

Ugo Monye, the former England and Harlequins player, is taking some time out of his busy schedule to talk about why he decided to speak up as a male ally for women’s rugby. With Monye, it isn’t virtue signaling for likes; he is doing the work and you can tell he means it. When he talks about the women’s game, he makes sure to place it on equal footing with the men’s, seeing it all simply as rugby.

“When we’re talking about just the game of rugby, that’s the laws, how it makes you feel, the community of it, and for me, I feel like if you love the game, then it’s important to support all aspects of the game,” said Monye.  “Now I’ve exited the game, I want to promote the game in as a positive way as I can.”

Kurtley Beale stars on the Offload:

Kurtley Beale stars on the Offload:

Monye is now a visible male ally and will be part of the BBC’s team for the Women’s Six Nations final next weekend but he admits during his playing career of having little interaction with the women’s game, something which changed last year.

A year of change
While the past 12 months has seen upheaval due to the pandemic, it has also seen the fight against racism taken up more loudly and forcefully than ever before.

These discussions and actions of the past year are in part what has inspired Monye to speak out.

“Over the last 12 months or so, social inequality and injustice have been at the forefront of lots of people’s minds and I’ve been quite outspoken about racial discrimination.”

“One part, which really stuck with me was understanding that, if you want to combat it, then you need everyone in the room to be able to help.”

“So I’ve got past experience with racism, but the one thing I kept saying is that we do need allies and I thought well, if I’m asking for people to be allies for something that I’m passionate about and have this unwanted relationship with, then I think I need to attribute myself to be a good male ally in a different way.”

This had led to a process of talking with people across the game and learning as much as he can and while this has revealed the many amazing things going on in women’s rugby it also shown how the problems feel almost endless.

He said: “When you’re talking about social injustice and inequality, a problem shared is often a problem doubled and one question spirals into another and it just grows legs.

“So, we can talk about pay, we can talk about funding, visibility, broadcasting, all of that, but then when you actually get talking to some of the female participants, and there’s so much more to be done and learnt, it, honestly, is bonkers.”

The gender imbalance
The former Harlequins winger retired from rugby in 2015 and has since forged a very successful career in the media, taking every opportunity that has come his way, something he only recently realised isn’t always possible for his female counterparts.

Monye said: “I was fortunate to be at the [2019] World Cup. The moment I got offered that job and that opportunity, I was really excited.

“I went and I spoke to a couple of female journalists, and said: ‘You missed out on coming to Japan.’ They said: ‘No, I’d have loved to have been there, I can’t just leave my daughter at home for eight weeks.’

“Once again, that was just not a consideration, I just left and my wife is at home with two kids and she did an amazing job. It’s another thought process, which women have to go through which I’ve never had to consider because it’s not been the life that I live.”

Monye has two daughters, both of whom were born after his playing career finished, but when he considers the experiences of male and female players who start families while still competing, he recognises they can be poles apart.

“I look at like my male peers who play the game, they don’t have to consider in terms of the impact to their career when they start a family, it’s very different in the women’s game,” he said.

“If you’re a female rugby player and you decide you want to start your family in the middle of your career, you then have to go through the process of having a baby for nine months and then taking time off and getting yourself back to a level in one of the most physically demanding sports in the world.”

Many female players will also have full-time jobs alongside any rugby or family commitments, Monye admits he would not have been able to achieve what he did if he had to juggle everything.

How can we be great male allies for women’s rugby…. ?? pic.twitter.com/IQpGrsN9Cn

“I had a reasonable career; I wouldn’t have had as good a career if I had to have a full-time job on the side.

“I just think it’s remarkable how they’re able to kind of be high-performing athletes whilst being high performing in their other like professional careers.”

Untapped potential
While it often feels like the women’s game is stagnating, particularly with results in last weekend’s Six Nations seeming to highlight a gulf between nations that is not narrowing, Monye is keen to highlight how women’s rugby is leading the way.

Before the pandemic, women’s rugby was the fastest growing team sport in the world and World Rugby have announced a global calendar, WXV, and £6.4 million to fund it.

While a completely professional women’s game is what most desire and are working towards, however slowly that may be, Monye believes that the stories of players who are more than just rugby players are a great way to get people into the women’s game. 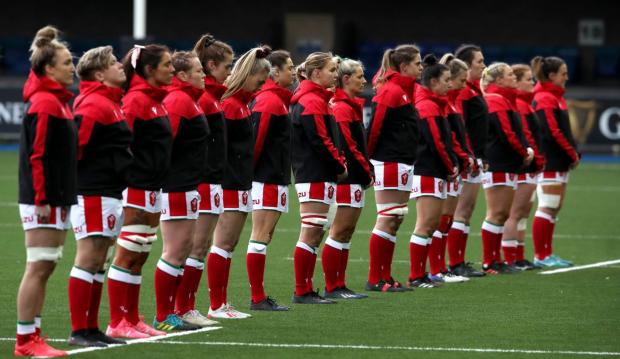 He said: “There are just so many amazing stories, they’re all really interesting characters and I think our women’s game has so many personalities and their stories humanize who they are a little bit more.
“So, from a human level, it’s easy to connect to someone like that because they resemble you a little bit more.”

To get more people connecting with the women’s game, more people need to be able to see it and now that Monye has moved into the media he is in full support of a broadcaster coming on board to televise the Premier 15s whether it is his employer, BT Sport, or not.

“I think it’s really important that anyone that can help increase the visibility of the game is great because once people are introduced to the game, they tend to enjoy it.”

He continues: “It’s an opportunity to not just celebrate the teams, but the individuals and once again, another opportunity for women rugby players to be able to tell their stories.”

Furthermore, Monye recognises that as a male ally he has a role to play in both spreading the word of the women’s game as well as raising up those who came before him.

He said: “As much as I want to help the women’s game I also don’t want to take opportunities away from other female pundits; to parachute me into the semi-finals or finals of the AP15s, when I know people have worked really hard all season, not just this season, but for a number of seasons for opportunities like that.

“As much as I want to be a good male ally, I also want to do it in the right way.”

Women on the biggest stage
Around the same time that the World Cup in New Zealand was postponed until 2022, unions were moving heaven and earth to ensure that the British and Irish Lions would go ahead.

Just a week later, the insurance company Royal London became the principal partner of the Women’s Lions team with a focus on increasing funding in women’s rugby and completing a feasibility study regarding the formation of a women’s Lions team.

Monye, a former British and Irish Lion, believes that a women’s team could only be positive.

“When I consider my experience, why shouldn’t the women be able to experience something equally as incredible? I think it’d be amazing to think in terms of the learning, the group thinking, being able to get England, Ireland, Scotland, Wales together, not just for the players put for the coaches too.

“Once you’ve been in a high-performance environment like that, it would potentially then put pressure on some of the other home unions to follow the lead of what the RFU did in terms of contracts, the level of professionalism and if that only increases the participation in the women’s game in the British and Irish Isles, and that’s got to be a good thing.”

What’s next?
Things appear to be looking up for women’s rugby with an Olympics, World Cup, WXV calendar and potentially a Lions tour all taking place in the next couple of years, however, Monye knows that the sport cannot afford to stand still.

He said: “For the women’s game, I think they’re in a good place, but that doesn’t mean we can be complacent about it.”

“The success of the Red Roses currently needs to have a lasting impact on everyone. Not just for now, not just for this World Cup cycle or Olympic cycle, but for the long term as well.”

For Monye himself, he now hopes to encourage more men to support the women’s game.

“What’s next for me in terms of being a male ally, is listening and learning, that’s kind of what I’m currently doing, and that is going to be a continuation for as long as I live. You can’t know enough, especially when it’s not a lived experience.

“Then for me, it’s just trying to understand how I can be a better male ally and then putting it into practice. I guess the next stage for me would be for other men to follow suit and add their weight where they can.”

Whatever Ugo Monye does, women’s rugby should be glad to have him.