Billy Burns enjoyed a try-scoring full international debut but was forced off injured as Ireland secured second place in Group A of the Autumn Nations Cup with a laboured 23-10 win over Georgia.

Credit to Georgia who have grown in confidence week on week! pic.twitter.com/nOHkJbUQ1S

However, a promising afternoon for the England-born Ulster man was prematurely ended by a knock sustained early in the second period at the Aviva Stadium, significantly disrupting the rhythm of the unconvincing hosts.

Georgia arrived in Dublin yet to score a point in the tournament but produced arguably the moment of the match courtesy of a dazzling first-half score from Giorgi Kveseladze.

The tenacious visitors can take plenty of confidence into next weekend’s meeting with Fiji, although that wooden spoon fixture remains in doubt as each of their opponents’ Group B matches were cancelled due to Covid-19 protocols

Ireland endured persistent set-piece struggles in the 18-7 loss at Twickenham last time out and, despite the relatively comfortable final scoreline, were far from flawless in that area this week.

Head coach Farrell made nine changes to the side beaten by Eddie Jones’ World Cup finalists as he seeks greater competition from a relatively small player pool.

He would have been encouraged by a positive start in which the hosts went 10-0 ahead inside 14 minutes following sustained pressure and some neat interplay.

Quick hands from centre Chris Farrell released Burns and he dived over the line for his first international try before adding the extras and, minutes later, kicking a penalty.

Georgia could have been disheartened by the early setbacks, considering their lack of attacking threat in this tournament,

Yet they responded in fine style with a sensational try from the nimble-footed Kveseladze. 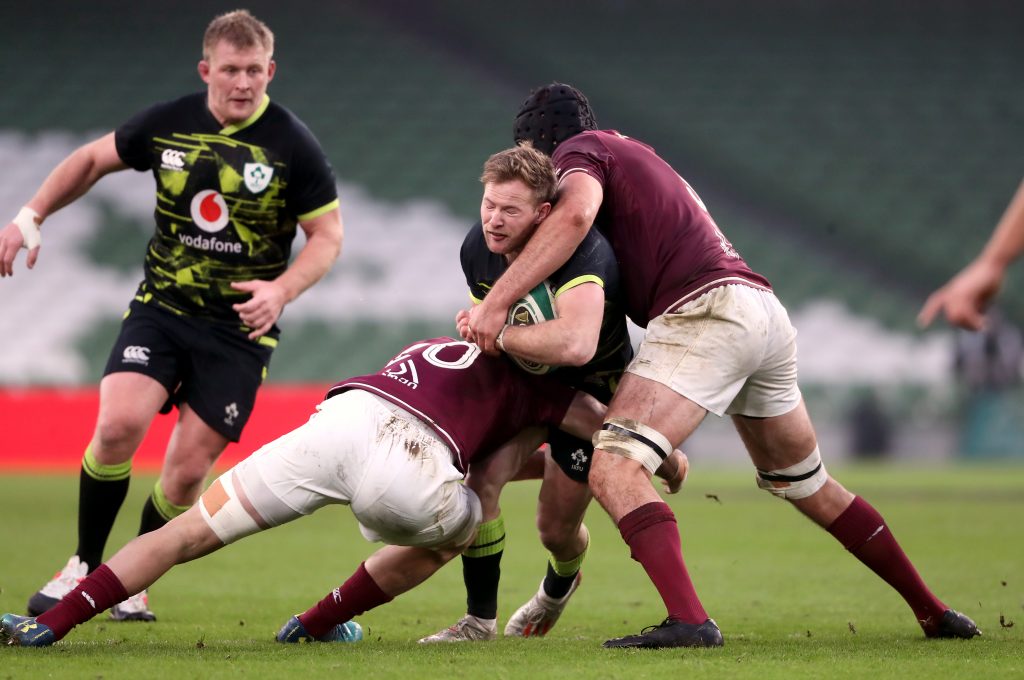 The centre collected the ball in his own half following some slick passing, burst into Irish territory and then dummied his way past Jacob Stockdale and Burns to touch down beneath the posts, allowing Tedo Abzhandadze a simple conversion.

A second Burns penalty kept the hosts in control of the scoreboard, before he kicked another conversion to make it 20-7 at the interval after winger Keenan collected Stockdale’s pass to touch down his third international score wide on the right.

The half-time lead would have been greater had Stuart McCloskey not been harshly denied a try on his return from the international wilderness. 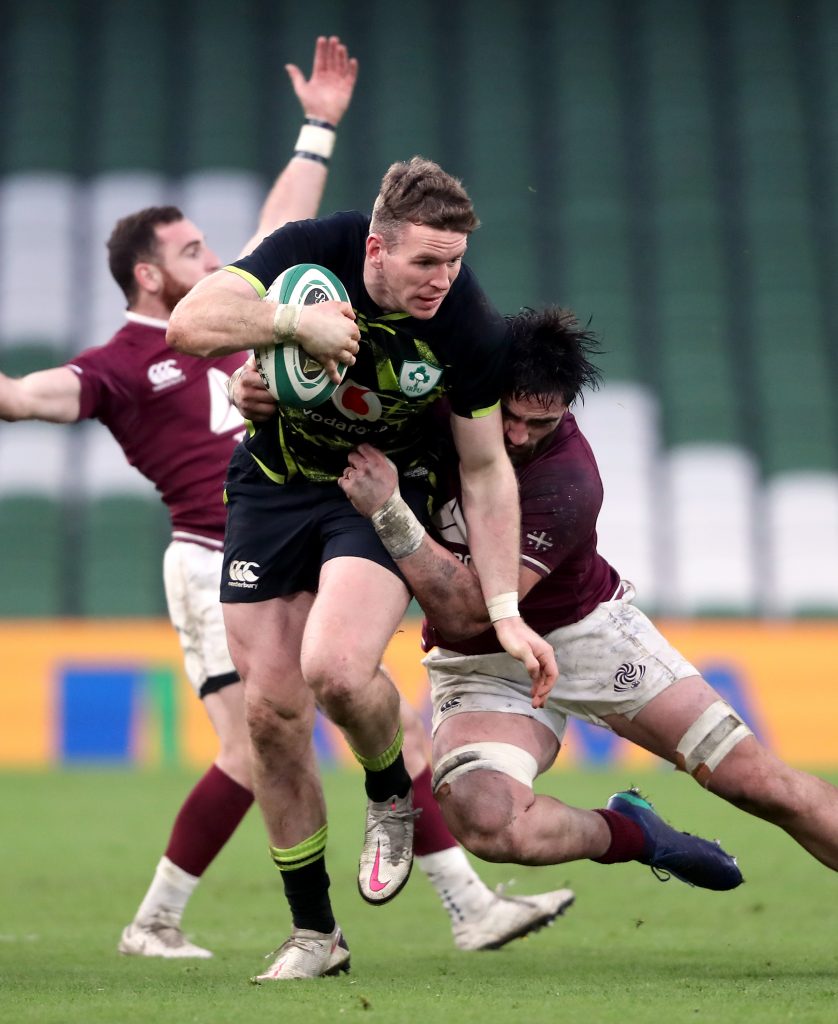 Ulster centre McCloskey, winning his first cap in more than two years, stretched his legs on the left wing to cross in the corner, only for French referee Mathieu Raynal to adjudge Stockdale’s pass had travelled forward.

On the back of the disallowed score, Georgia began the second half with renewed vigour.

After Burns, winning his third cap following two substitute appearances, departed, the physical visitors kept themselves in contention at 20-10 thanks to Abzhandadze’s long-range penalty.

Stifled by Levan Maisashvili’s men, Ireland’s display lacked fluidity and a cutting edge as the game wore on. 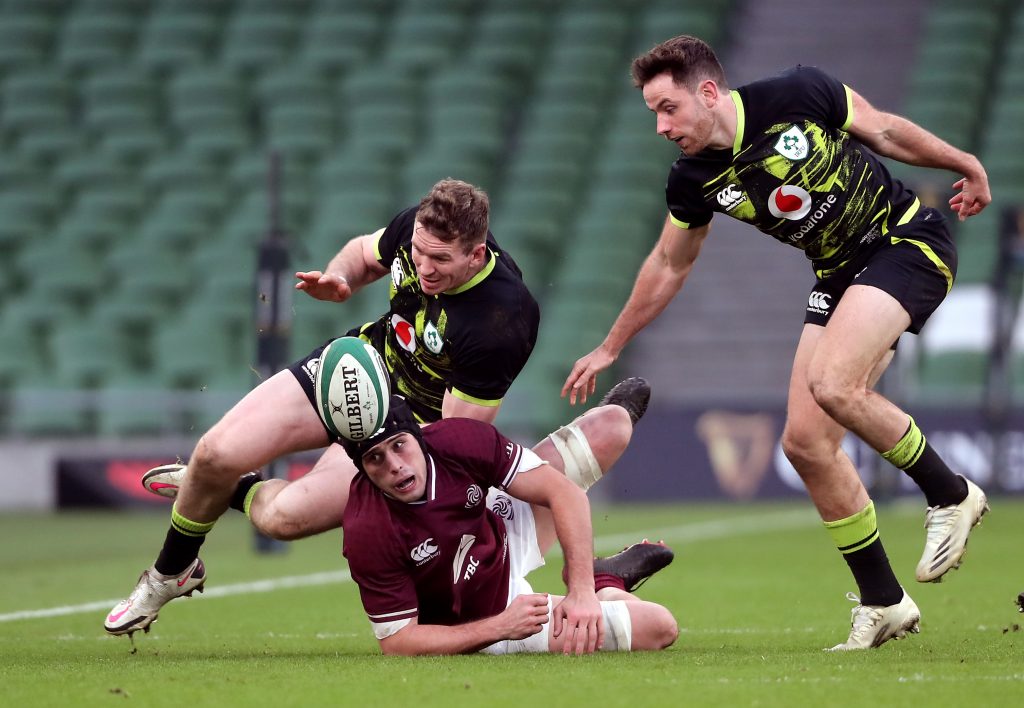 The hosts rarely looked like increasing their advantage but did manage to draw the second half 3-3 thanks to a penalty from substitute Byrne.

A debut from the bench for Shane Daly was a notable moment during the uneventful closing stages, while CJ Stander was held up on the line as he tried to force a late try.

Ireland’s victory was an eighth in succession on home soil, although the stuttering fashion in which it was achieved leaves Farrell with plenty to ponder ahead of locking horns with the Scots and, further forward, next year’s Six Nations.