Irish player ratings: They say forwards win rugby matches but this was maybe a case of Ireland’s backs being unable to capitalise on their pack’s dominance.

Ireland paid the price for a scrappy, directionless start and were ultimately unable to contain a clinical French side in Dublin.

A titanic encounter in Dublin! ? pic.twitter.com/0LdM24BDD8

15. HUGO KEENAN – 7
Like the caretaker at the Overlook Hotel, Keenan looks like he’s always been Ireland’s fullback. Not only is he a safe pair of hands, he seems to convert every touch of the ball into a potential attacking opportunity.

14. KEITH EARLS – 5
Spent his afternoon kick chasing and as is the depressing trend for Northern Hemisphere three-quarters, saw very little ball in attack – looked dangerous the odd time he did.

13. GARRY RINGROSE – 6
The Rolls Royce of Ireland’s backline remains a calm head, even when all around him is falling apart. Did well with nothing but dirty ball and made an impressive 68 carry metres, second only to Keenan in the Irish ranks. France marshalled Ringrose and his comrades well.

12. ROBBIE HENSHAW – 5.5
He acted as first receiver so often in the first half that you could be forgiven for thinking he was wearing the 10 jersey. Ireland’s form player was asked to shoulder too much here.

11. JAMES LOWE – 6
His ability to effortlessly hoof the ball up the field was deployed as a major defensive weapon for Ireland, his massive quads clearly a major element of project ‘Mind Billy Burns’. A huge presence on the field but started to wain in the final third and his defence is still a work-on.

10. BILLY BURNS – 5
After the headlines this week, it was perhaps unsurprising that he took time to settle, shanking a kickable 18th-minute penalty, before correcting the error a few minutes later. Ireland were too eager to shelter Burns from responsibility and it cost them any attacking direction. A few up-and-unders aside, a crisp pass in the lead-up to an early attack was all there was to judge him on, but it can’t be ignored that Ireland looked at sea in a group effort to protect him. Left for a HIA shortly after half time and didn’t return.

9. JAMISON GIBSON PARK – 5.5
Failed to control an errant ball which lost Ireland a promising attacking platform in France’s 22. At times Ireland felt like a car careening out of control, such was the lack of direction offered between Ireland’s 9 – 10 – 12 axis in the first half. A few too many missed tackles and unforced errors, but he played better off the more familiar Ross Byrne.

1. CIAN HEALY – 6
A typically solid shift from the grizzled centurion. The ageing prop remains a wall in defence and a consistent winner of collisions for the men in green, other than his brutal friendly fire incident with Henderson, which left him floored and bloodied. 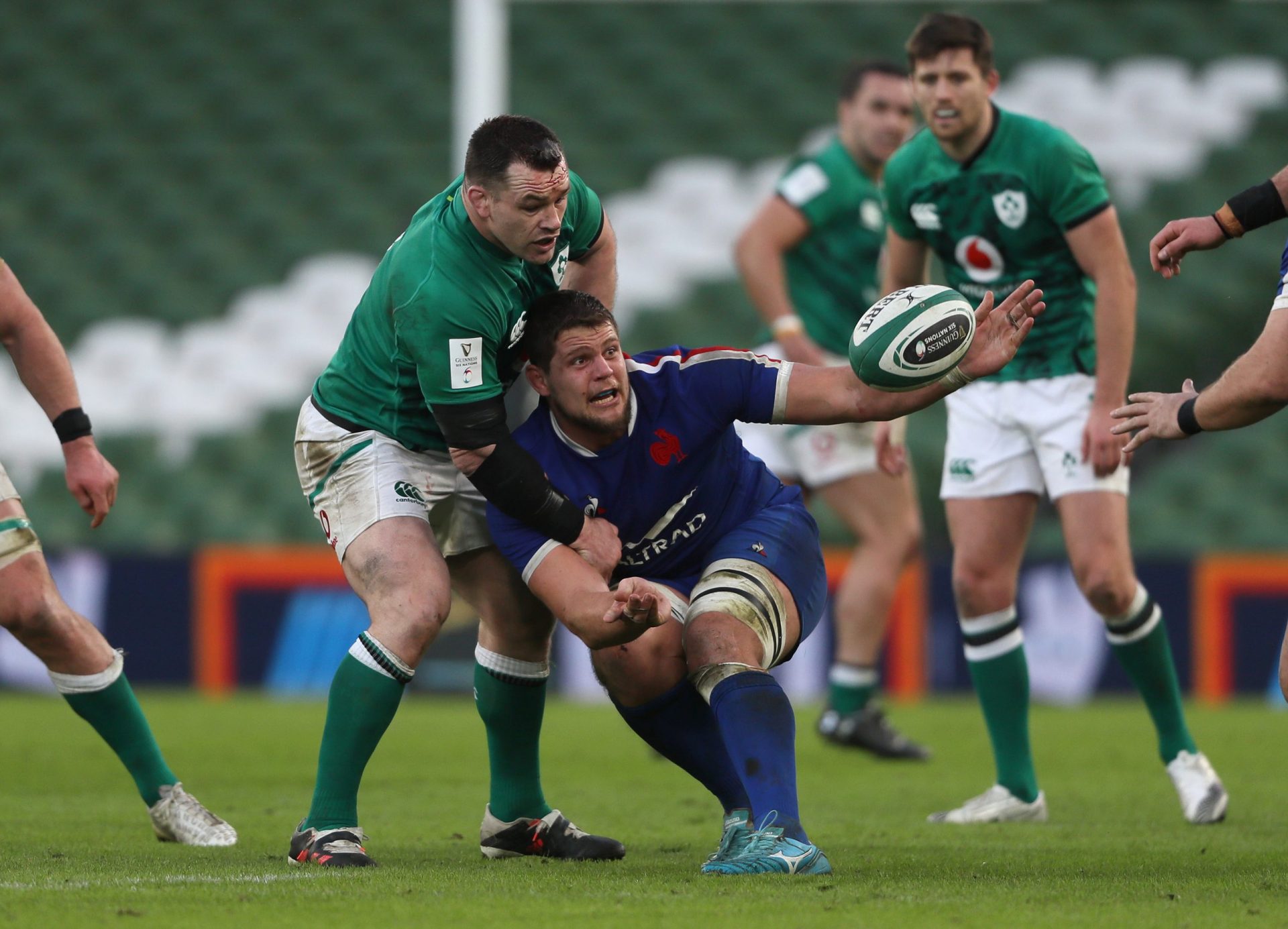 2. ROB HERRING – 5
Lucky that a knock-on didn’t lead to an intercept for Gael Fickou. Deserves credit for Ireland’s setpiece dominance but needs to contribute more around the park to make a long term claim for the jersey.

4. TADHG BEIRNE – 6.5
Beirne and Ruddock dominated the lineout early on. The Munsterman’s ability over the ball shone again with three turnovers won but against that were three penalties conceded. Still one of Ireland’s best performers.

5. IAIN HENDERSON – 7.5
A first-minute charge down echoed Itoje’s efforts against Scotland a week before; Henderson it seemed – who had yet to lose to the French – was up for this one. Ireland matched France up-front and the Ulsterman lead from the front.

6. RHYS RUDDOCK – 6
The hulking Leinster workhorse had a point to prove coming into this one, having been overlooked by Farrell in the past. Carried competently and an ever-dependable defender.

7. JOSH VAN DER FLIER – 5
A couple of decent carries aside, it was a quiet afternoon for van der Flier, who struggled to impose himself on proceeding.

8. CJ STANDER – 7
After a sluggish start, Stander left the field with a staggering 93 metres chalked up. That figure maybe flatters to deceive, as it wasn’t quite the high watermark that he set against Wales last week.

REPLACEMENTS
16. RONAN KELLEHER – 7.5
Super-sub Kelleher blasted his way over for his first Test try moments into the game. Putting real pressure on Herring now for a starting spot.

17. ED BYRNE – 5
Has been quietly grafting away at Leinster for years. A relatively modestly sized prop, the loosehead has bulked up to 114kg and the resultant effect on his mobility doesn’t suit him.

18. TADHG FURLONG – 6
Not back to full fitness or form but it will warm Irish hearts to see him stalking the paddock.