How the All Blacks have changed philosophically since the Ireland series

The All Blacks escaped with a last-gasp win in Melbourne to avoid a third defeat in this year’s Rugby Championship, but despite the up-and-down results, the All Blacks attack has been improving rapidly since the Ireland series.

The biggest difference has been the evolution of the kicking game and a change in risk appetite to a level now that is currently the highest tolerance for risk in test rugby.

The All Blacks have seemingly adopted the mantra of ‘no risk, no reward’ in rebuilding themselves as an attacking juggernaut once again.

They have scored 92 points over the last two tests as their new plans come into fruition.

Along with much better fundamentals, the attack has opened up to score 19 tries, the most of any team in this Rugby Championship tournament, and the tries per game average has improved to 3.8.

Back in July, the third test 32-22 loss to Ireland in Wellington featured three largely individual tries by the All Blacks, a pick-and-go to Ardie Savea, a strong carry by Akira Ioane and a breakaway run by Will Jordan.

Outside of those moments, the phase play languished around one out carries and the team failed to open up Ireland with orchestrated ball movement, often went backwards and failed to create many line breaks through team play.

The ruck was inefficient and the side became bogged down by a lack of sharp fundamentals in the shapes and patterns they tried to run over the final two tests.

Admittedly, Ireland’s defence was top draw and the All Blacks haven’t seen as a defence as suffocating since, but they were guilty of getting one dimensional themselves.

The Rugby Championship has seen a more explosive All Black side, in part because of their willingness to use any part of the field to attack space on offer, a stark contrast to the conservatism that had crept into their game in the Irish series.

The sea change came at Ellis Park as the All Blacks opted to attack wide out of their own end and executed well. They tried at times in Mbombela but handling let them down.

The tactic is a rare sight in test rugby these days as most teams have no desire to attack from deep inside their own 22.

Whilst they haven’t attempted to exit by running every single time, they have continued to keep that option open whilst adding a wide variety of exit kicks that target different zones.

The All Blacks have used box kicks, high bombs, cross field kicks, grubbers and chips all from different players coming out of their own exit zone.

The primary objective of most of the kicks has been to keep the ball in play and secondly, regain possession with the chance to then attack off the back of that with the defence scrambling.

Aaron Smith, Jordie and Beauden Barrett, David Havili, Richie Mo’unga and perhaps most importantly, Will Jordan, have all been used as kicking options.

Having skillful kickers at 9, 10, 12, 15 and 14 with both long and short dabs in their arsenal has spread out the load and means that there is no predictability in the All Blacks exit plan anymore.

That nearly every player can kick means that they can explore the run first and take the kicking option second once the space disappears.

The first exit in the second half in Melbourne saw Beauden Barrett use a cross field kick to get the ball into the hands of Jordan, who kicked deep once his space was closed down.

The entire defence and backfield pendulum is forced to work harder to cover as a result.

On this occasion the strong kick chase trapped and turned Wallabies fullback Kellaway, and the All Blacks scored a try off the breakdown steal through Samisoni Taukei’aho moments later.

The picture that Barrett saw once he had the ball was enticing with a three-on-one overlap outside lock Jed Holloway (4) and two of the All Blacks fastest men in Rieko Ioane and Will Jordan.

This is a common sight as the defensive line is usually undermanned during exit scenarios as they prepare for the kick with an extra man in the backfield.

At this level, teams are also not used to actually having to defend the edge in this zone as no one tends to go there.

The All Blacks have found the confidence to attack the space offered in that zone regularly. 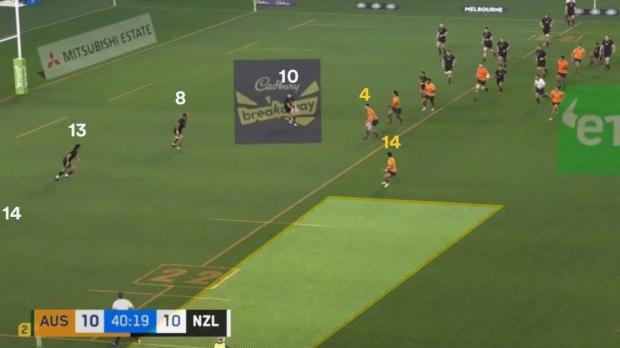 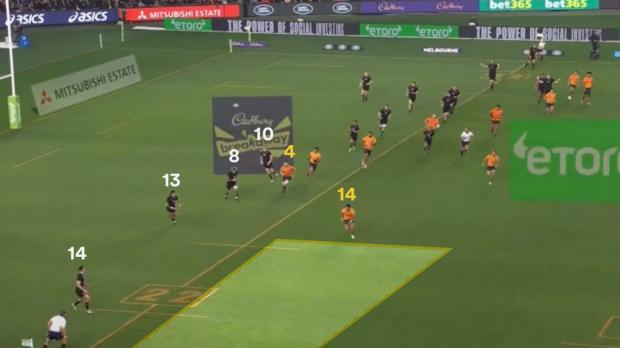 Allowing Jordan, the last man on the edge, to make the kick decision stretches defences more than they have bargained for.

They are short of numbers but if they don’t cover him, he will burn them.

The All Blacks have trusted Jordan’s decision-making to run when the space is there and put boot to ball when it isn’t, and he has shown good selection with both short and long options that hit the turf.

Jordan’s kicking has only backfired once this season, early in the second half in Mbombela against South Africa when he lined a fly ball out on the full.

The genesis of this tactic came from last November’s test in Dublin against Ireland where the right wing pulled off a 70-metre try after placing a perfect chip kick on the right edge over the oncoming Irish defender.

In a game where they struggled to make in-roads in the 29-20 loss, that flash of brilliance was a highlight. Hitting the edge from deep has now become a regular option for the All Blacks.

Ioane at centre has come to the table with a much better distribution game in the last couple of months, making massive strides as a ball playing 13 that can hold space for Jordan on the outside.

If Jordan did not have the kicking game that he has shown, the All Blacks would not be able to manage the risk as effectively when going to the right edge.

He gives the side the best of both worlds in the No 14 jersey with a solid kicking game and allows them to stretch the field when the opposition is weakest out wide.

That is not the only area where the kicking game has been integral.

Instead of bashing into a wall for too long in the midfield zones, the generals have been utilising short attacking kicks to pepper the space in behind with precision over the last two tests.

The accuracy of Mo’unga, Havili and Barrett with their kicking combined with the speed of the likes of Will Jordan on a kick chase has been a major problem for the opposition.

This style of play also suits the Crusaders pair Mo’unga and Havili, giving them a chance to utilise their strengths.

This multi-faceted kicking strategy has paid dividends, particularly in the wet against Argentina with three tries coming off the back of regathered kicks but again in Melbourne with another two.

Barrett combined beautifully with Jordan for a try in Melbourne off a chip kick, the Crusaders fullback caught the ball in open space and weaved his way around Kellaway and burnt the cover defence.

It is the third time Australia have been exposed in this fashion by Beauden Barrett in the last few seasons without a consistent sweeper.

In 2020 he had a chip kick for Mo’unga in Sydney for a long break away try and last year in Perth his left foot grubber was gathered by Jordan before his brother Jordie finished the passage.

The attacking kicks have continually found their mark and the All Blacks have turned into the best kicking team in the world over the last two months with four quality kicking options outside the halfback.

When Beauden Barrett enters off the bench at either first five or fullback, they still have four, and right now it is causing headaches for their Rugby Championship rivals.

'You're running out of time': Kiwi pundit calls for All Blacks to give Tuivasa-Sheck a shot

'It's not Foley's fault': Ex-All Black comes in to bat for Wallaby flyhalf