Exeter moved to within a point of reaching the Heineken Champions Cup quarter-finals after beating Sale Sharks 35-10 at Sandy Park.

The Chiefs preserved their 100 per cent record in Pool Two with a fourth successive victory after brothers Sam and Joe Simmonds cut loose.

England wing Jack Nowell completed the scoring, with Steenson converting, as not even a a torrential hailstorm that forced the players off for five second-half minutes could disrupt Exeter’s rhythm.

Exeter’s bonus point win put them on the verge of a first Champions Cup last-eight appearance since 2016.

Their remaining group fixtures next month are against Glasgow and La Rochelle, and they now lead the group by 10 points. 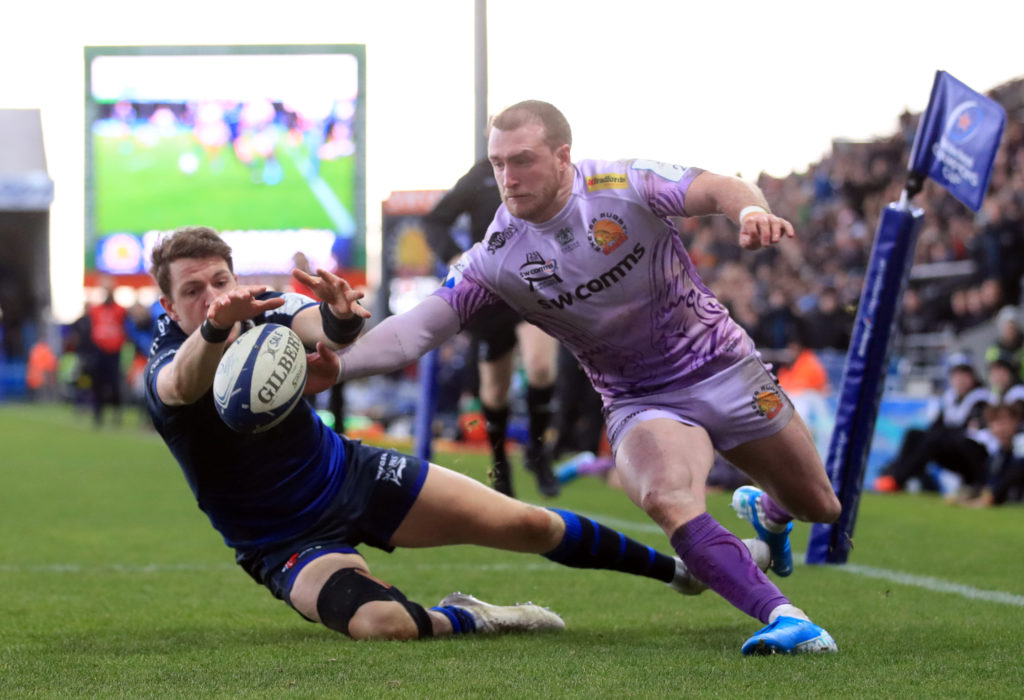 Sale, though, are effectively out of contention, joining fellow Gallagher Premiership clubs Bath, Harlequins and Gloucester in facing a probable early exit.

Centre Sam James scored a try, while fly-half AJ MacGInty added a penalty and conversion, but Exeter were never seriously troubled as they moved to within touching distance of the last eight.

Exeter were unchanged from the side that beat Sale last weekend, but Sharks boss Steve Diamond made 10 switches, including starts for scrum-half Will Cliff, hooker Curtis Langdon and lock Matt Postlethwaite. 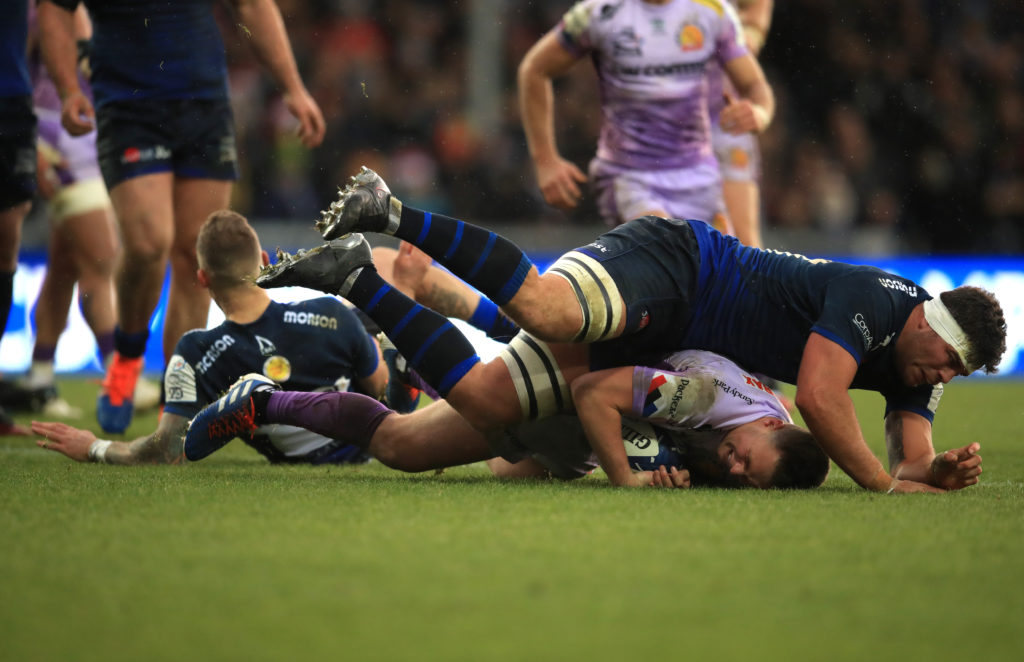 The Sharks were then forced into a positional reshuffle after full-back Cameron Redpath went off injured. He was replaced by Marlande Yarde, with Byron McGuigan assuming number 15 duties.

And Exeter, playing into a strong wind, hit back when Sam Simmonds powered over from close range for a try that his brother converted for a 7-3 lead.

Sale’s injury woes did not end with losing Redpath, as flanker Ben Curry failed a head injury assessment and was replaced by Cameron Nield.

Despite an advantage afford them by the elements, Sale could not make it count, and Exeter held an upper hand greater than the 7-3 interval scoreline suggested. 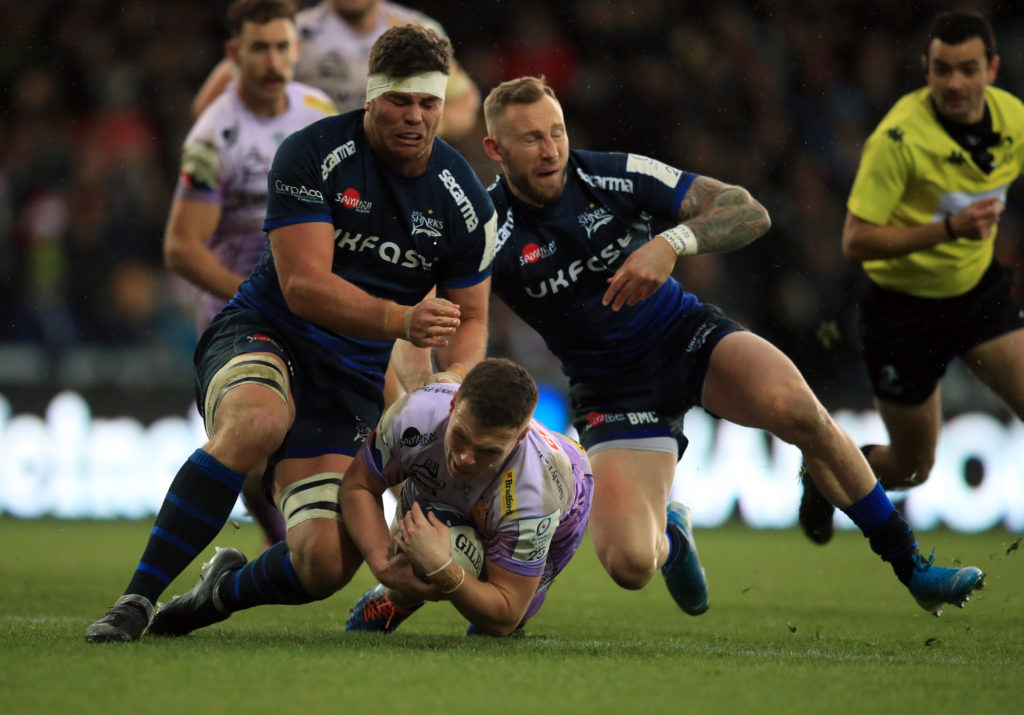 Henry Slade and Ian Whitten brilliantly to set up an early second-half chance for Exeter, but Hogg was narrowly beaten to the touchdown by a defending Sam James.

Wing Denny Solomona became Sale’s third player to depart early because of an injury, and Exeter were starting to move through the gears with Slade in the driving seat. 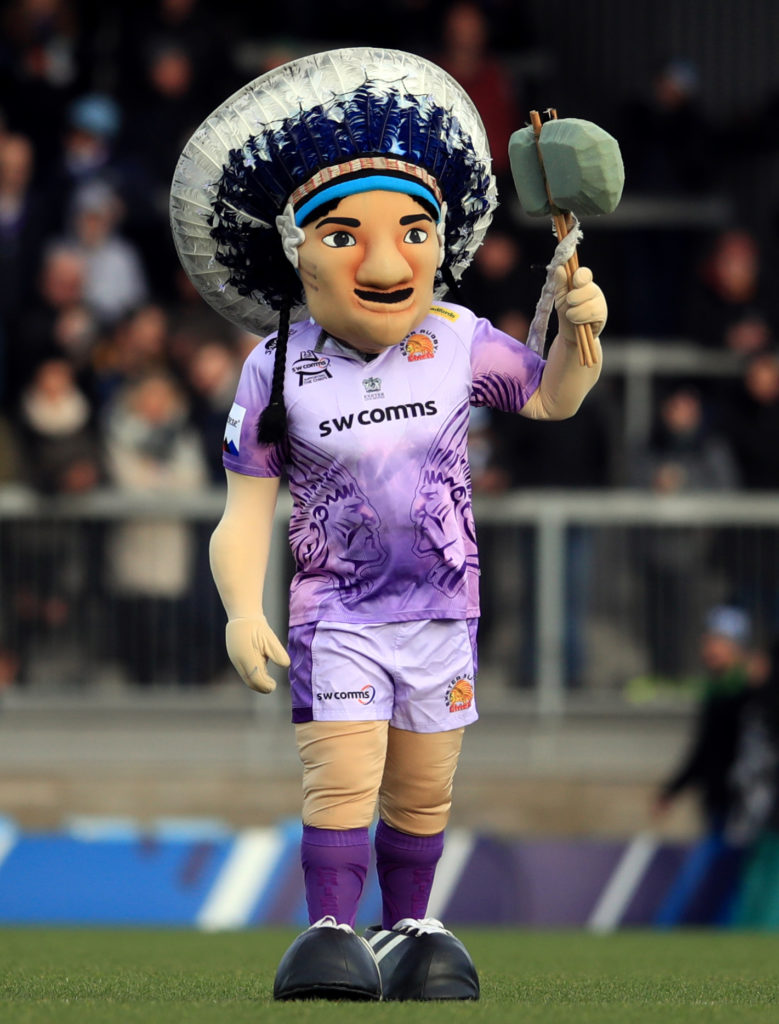 Langdon was then sin-binned for a technical infringement, and he had hardly left the pitch before Joe Simmonds crossed for Exeter’s second try that the fly-half also converted.

There was no stopping the Simmonds double act, and Sam Simmonds claimed his second try during a damaging spell for Sale when Langdon was still off, and another conversion opened up an 18-point lead. 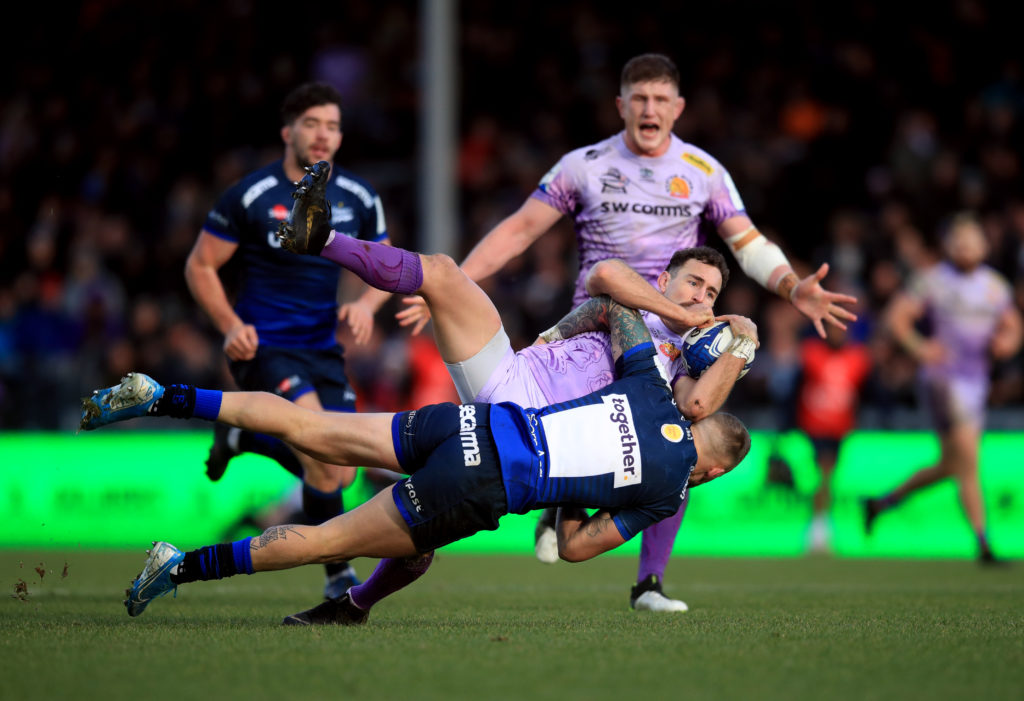 And there was still time for Nowell to squeeze his way through a pile of bodies and collect Exeter’s fourth try of a dominant second-half display.

The match in images: 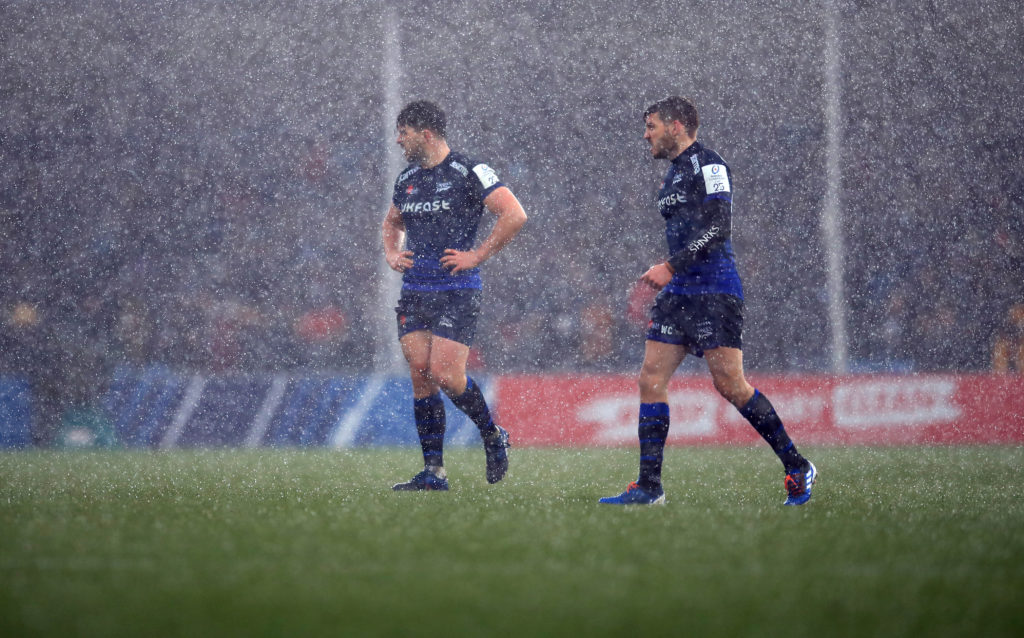 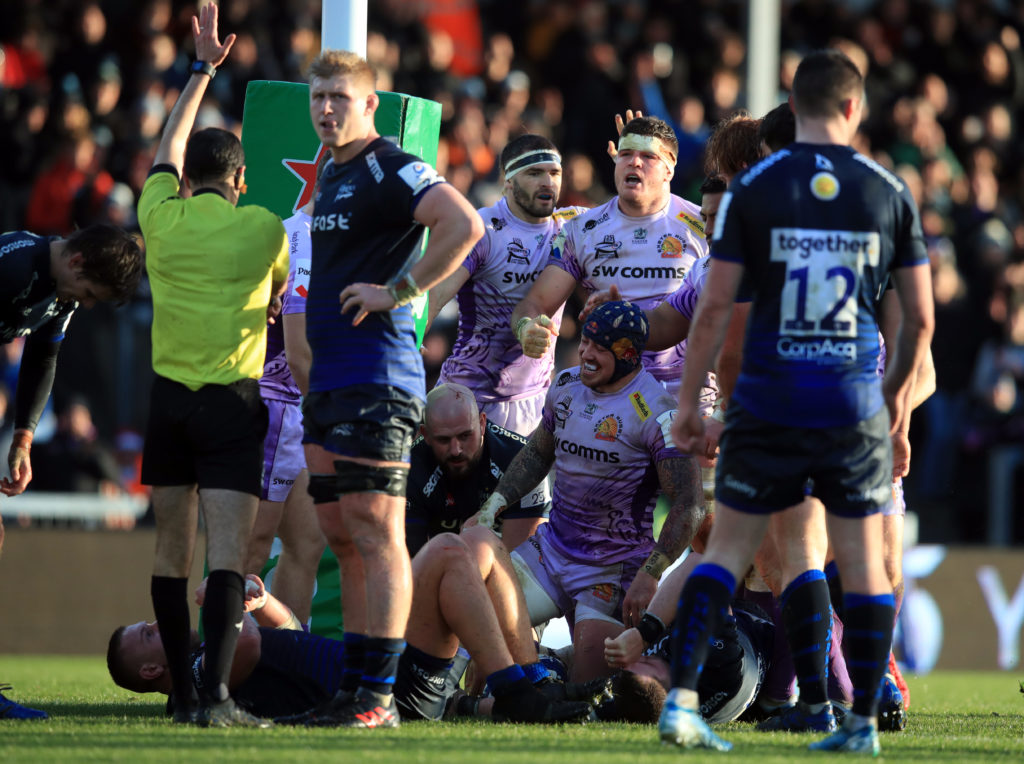 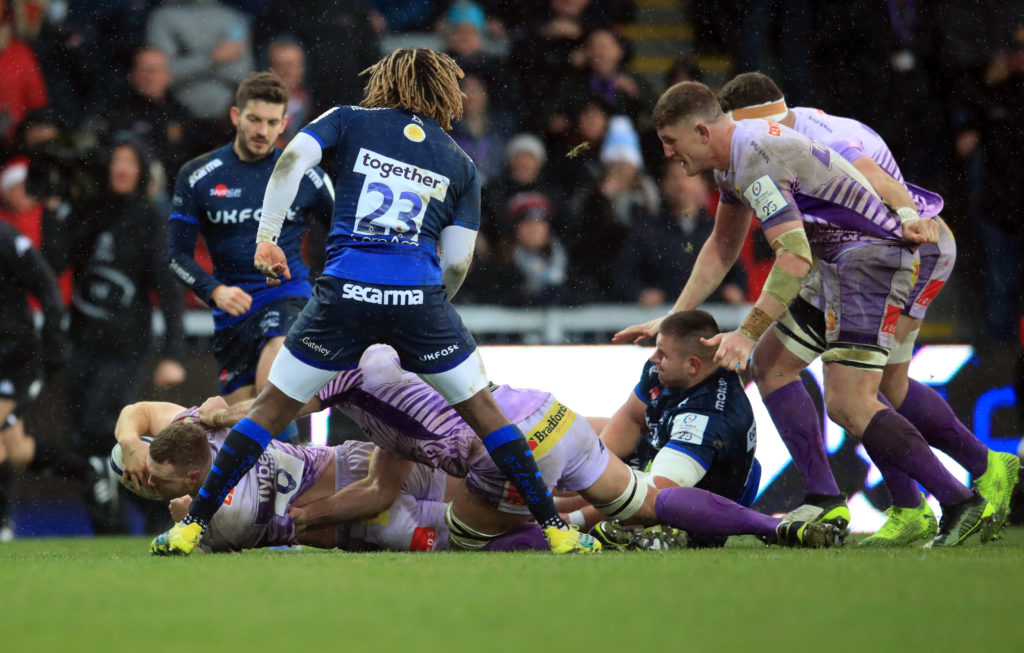 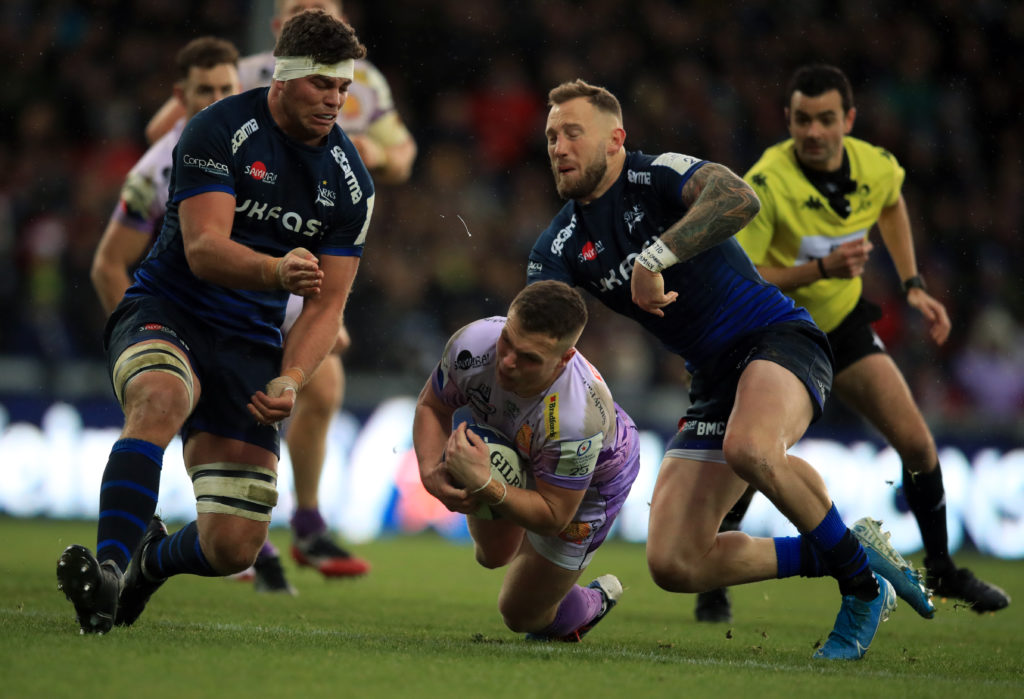 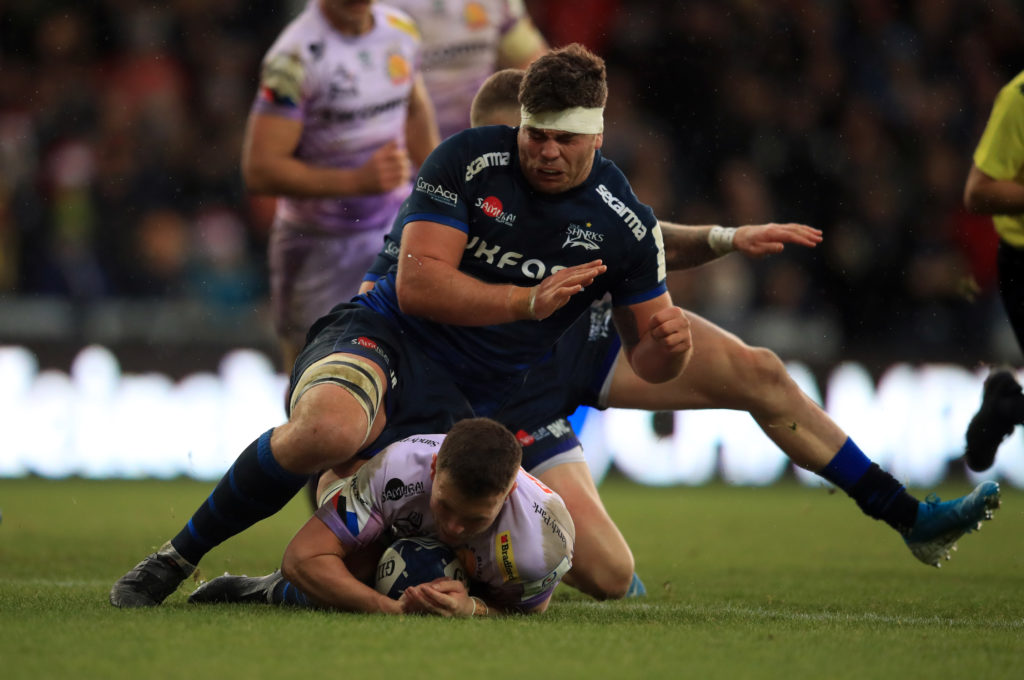 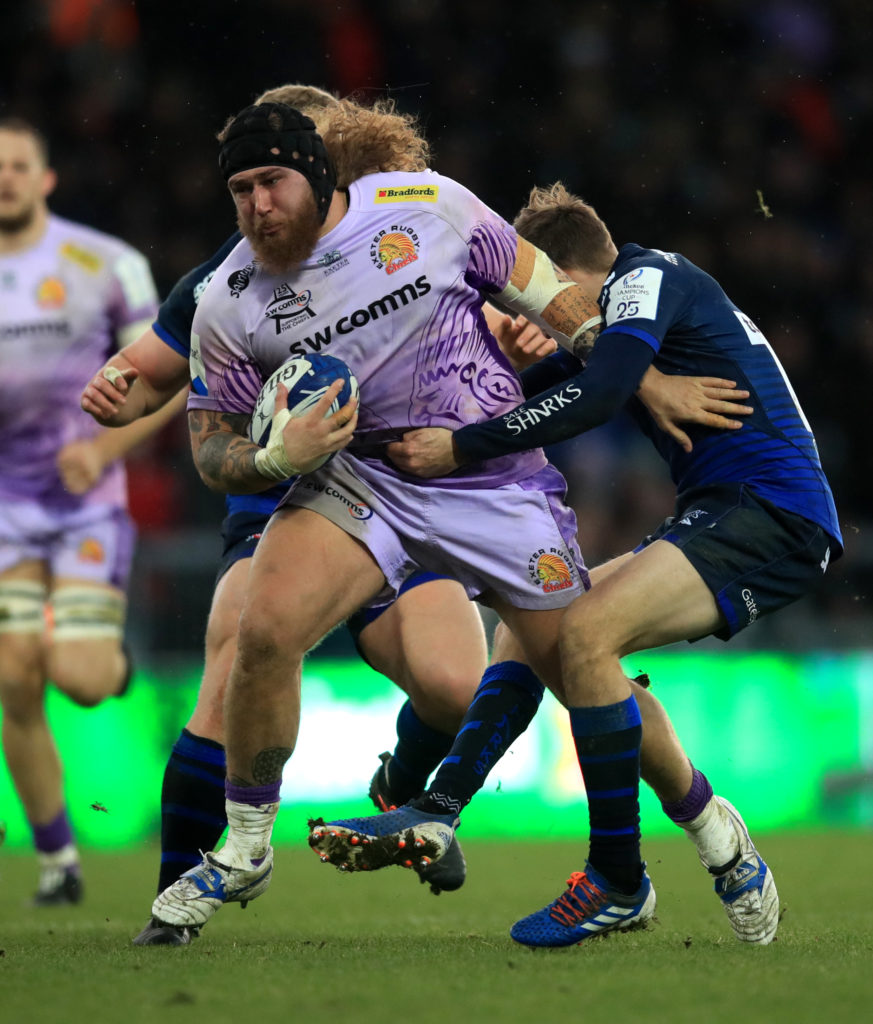 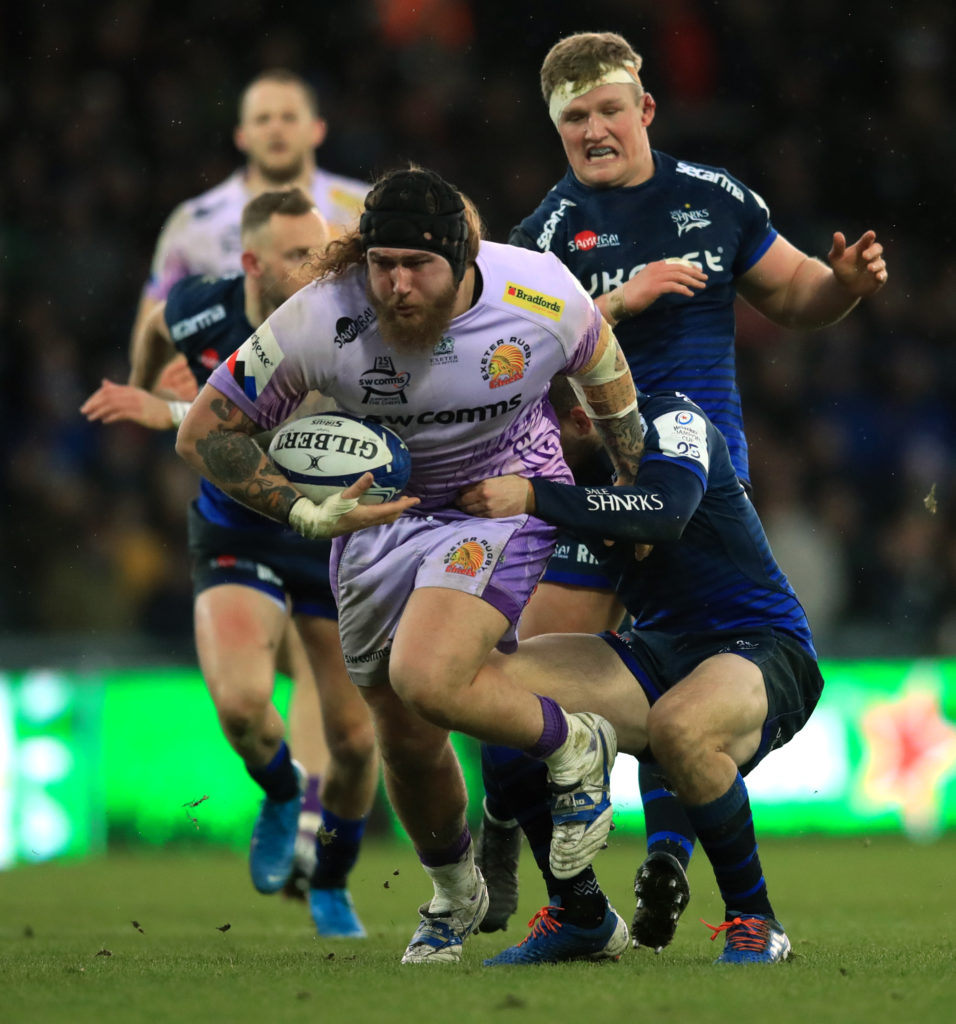 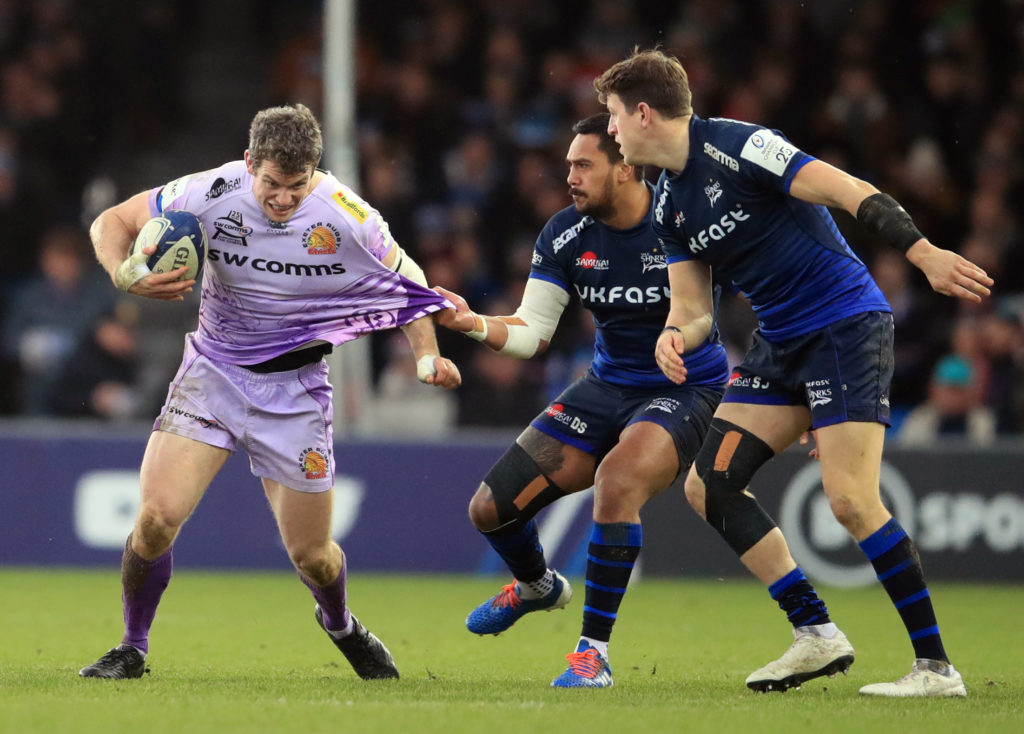 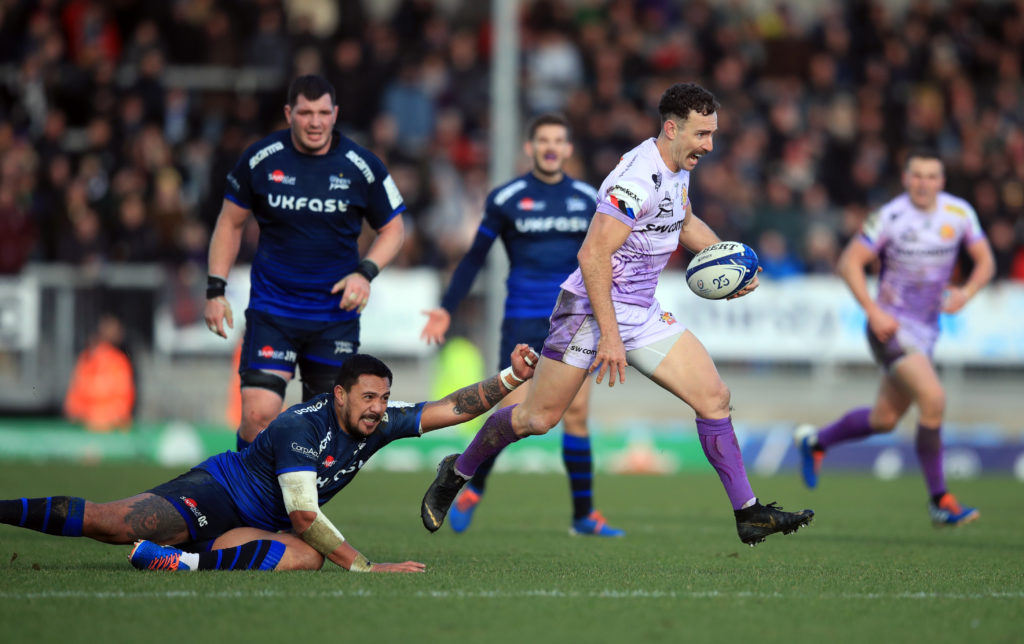 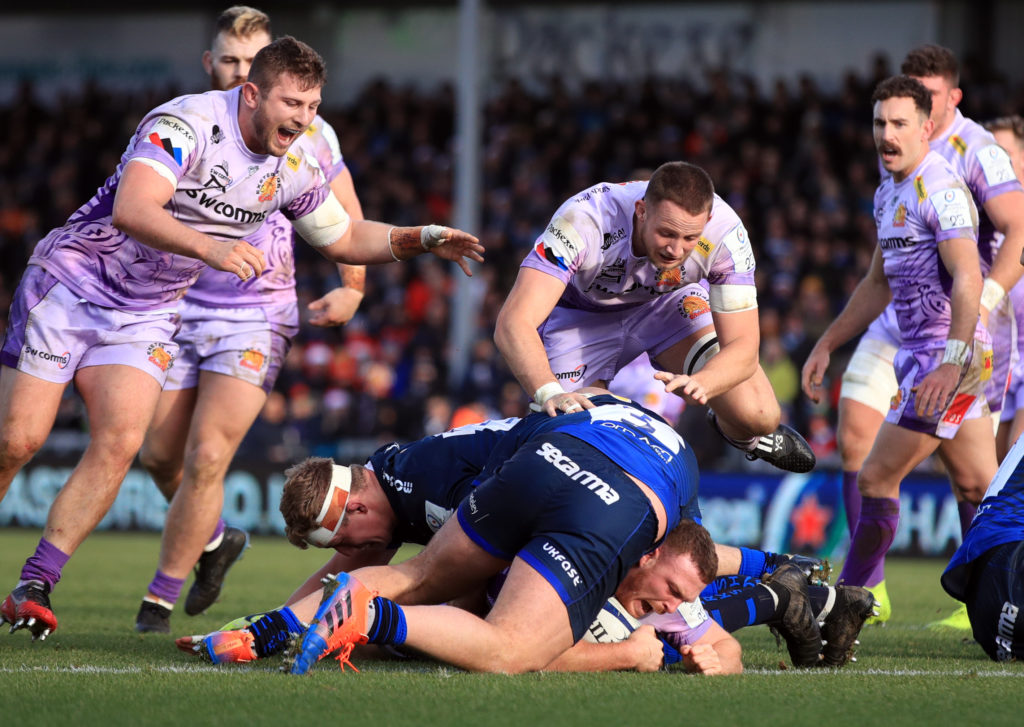 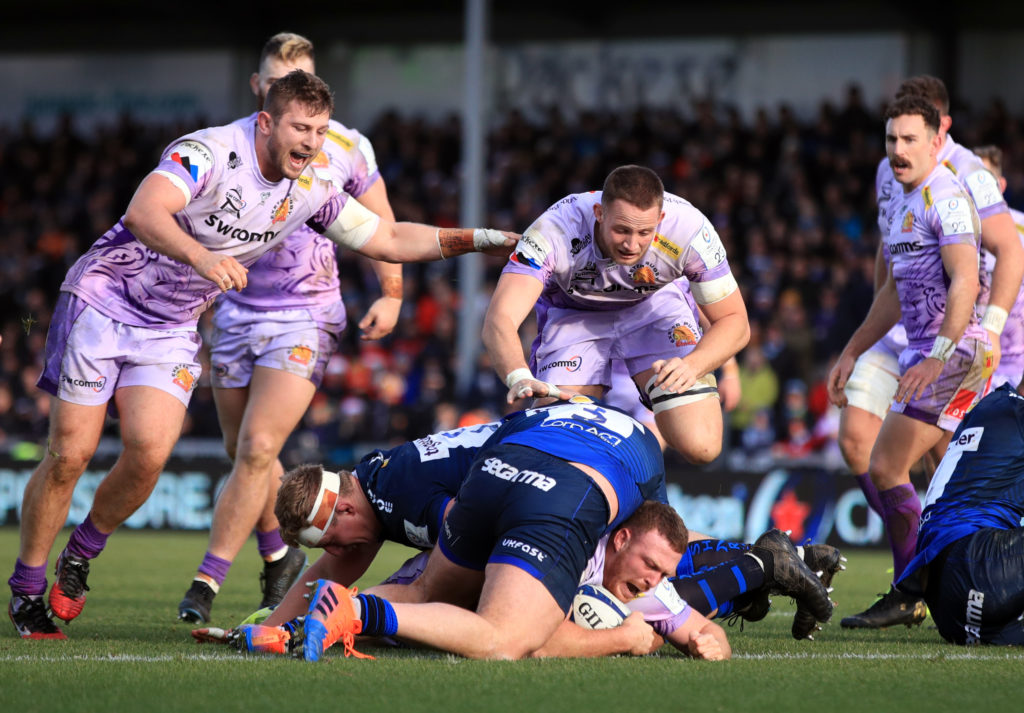 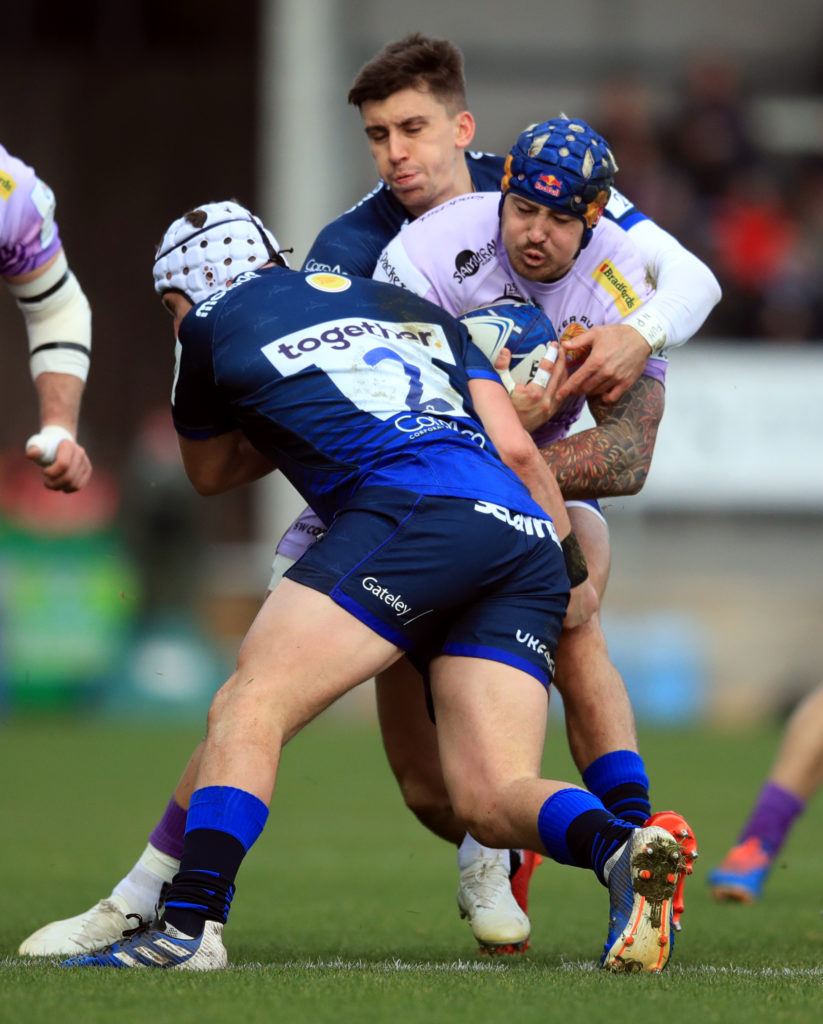 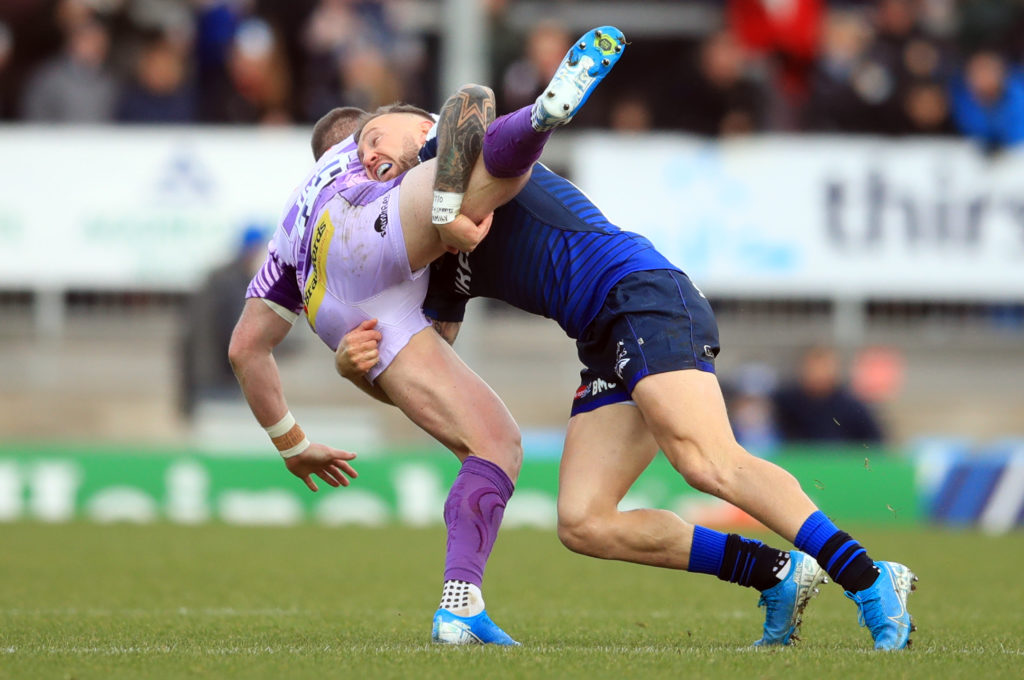 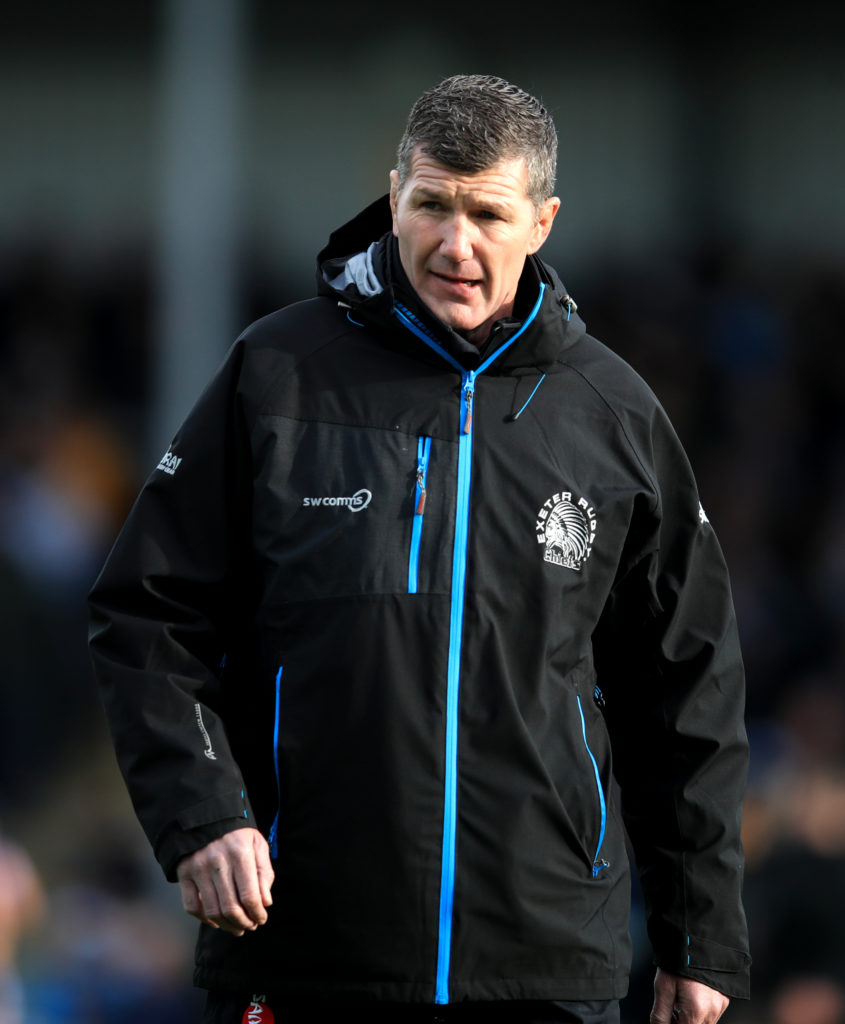 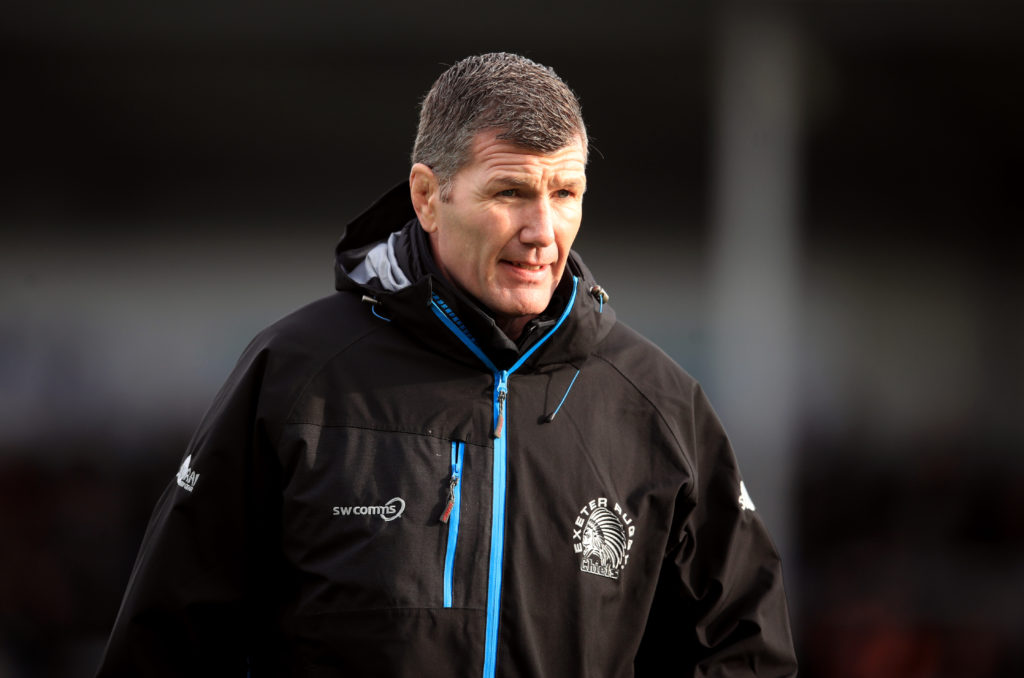