END_OF_DOCUMENT_TOKEN_TO_BE_REPLACED

Off the ball incident between Owen Farrell and Finn Russell

Borthwick has to ditch the Smith/Farrell axis

England have emerged from a toxic relationship

END_OF_DOCUMENT_TOKEN_TO_BE_REPLACED

From the little rugby I've played-ive witnessed concussions when the head meets the pelvic bone-so technic is all good below,but if the ball carrier changes his body position when the tackler is in the process of tackling it is very effective in knocking the tackler out- I've seen one player on our team use this technic effectively to knock out would be tacklers.

From the little rugby I've played-ive witnessed concussions when the head meets the pelvic bone-so technic is all good below,but if the ball carrier changes his body position when the tackler is in the process of tackling it is very effective in knocking the tackler out- I've seen one player on our team use this technic effectively to knock out would be tacklers.

Connacht opened up their Heineken Champions Cup campaign with a richly-deserved 36-9 bonus-point win over Stade Francais at the Sportsground.

Stade only had three Nicolas Sanchez penalties to show for their efforts. All Black centre Ngani Laumape was a late withdrawal, with Waisea Nayacalevu, Clement Castets, Yoann Maestri and Sekou Macalou also among the absentees.

Connacht started as the aggressors and their approach was rewarded when scrum-half Blade burrowed his way over after a 10th-minute maul. Carty slotted the extras for a 7-0 lead.

Playing their first Champions Cup game since 2016, Stade worked themselves back into proceedings and opened their account when Sanchez landed two penalties, one from inside his own half.

Both were awarded at the scrum to reduce the deficit to one in an entertaining opening quarter. Telusa Veainu broke into the Connacht 22 but was guilty of throwing a loose offload. 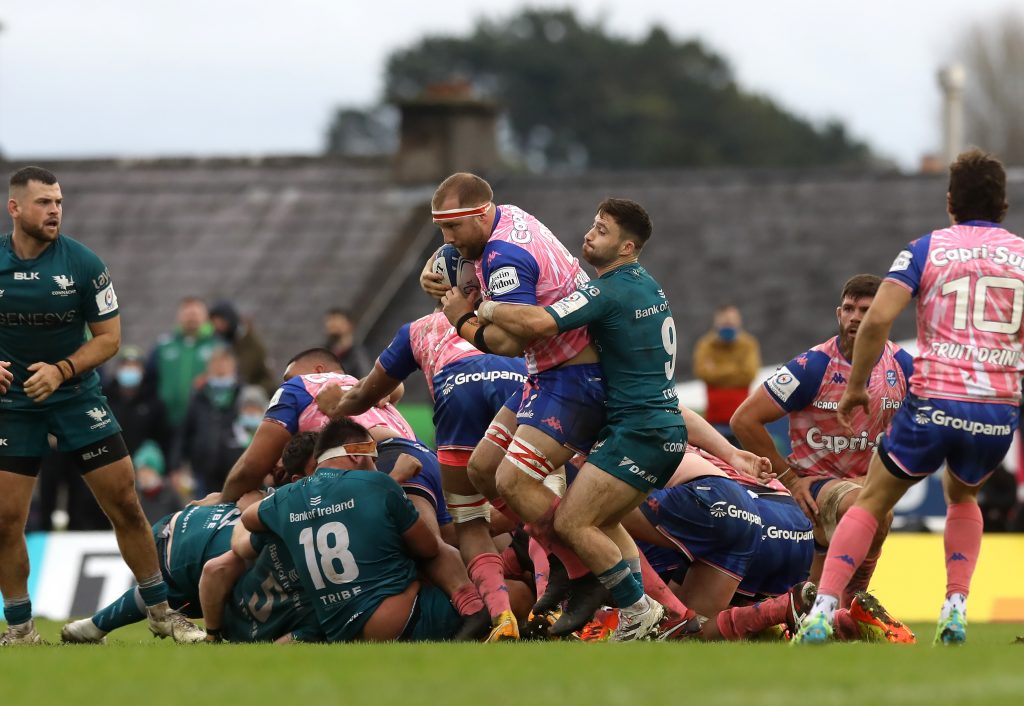 The westerners’ faith in their lineout was clear, given they turned down several kicks at goal. Their confidence in their set-piece was again justified when Porch touched down.

Blade burst from the tail of a lineout and — after a few phases — Carty’s beautiful looping pass found the Australian in acres of space and he sped over. The conversion was wide, but the hosts were good value for their 12-6 lead.

A familiar pattern emerged as Connacht scored try number three on the stoke of half-time. A powerful lineout drive was stopped close to the line and the westerners opted to spread the ball wide to the backs.

Once again, Carty found himself in space and — for the second time — he found an unmarked winger, this time Wootton, with a looping try assist pass. The Ireland fly-half added the conversion, widening the gap to 13 points. 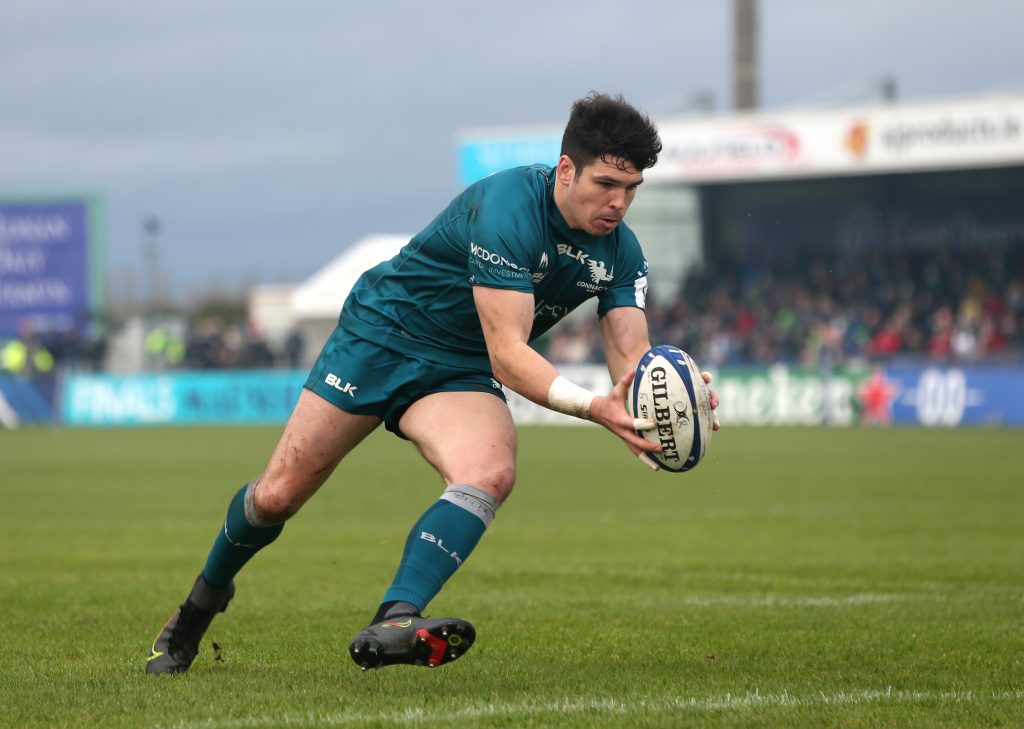 The second half was fractious in nature and the French side had another penalty from Sanchez, which was the only score for first 15 minutes.

Connacht wrestled back control and finished the game off in style – with tries from Masterson, Kilgallen and Prendergast – to wrap up the maximum haul.

With the gusting wind causing problems for Sanchez’s kicking, Stade could not take advantage of their larger share of possession and Connacht stung them late on. 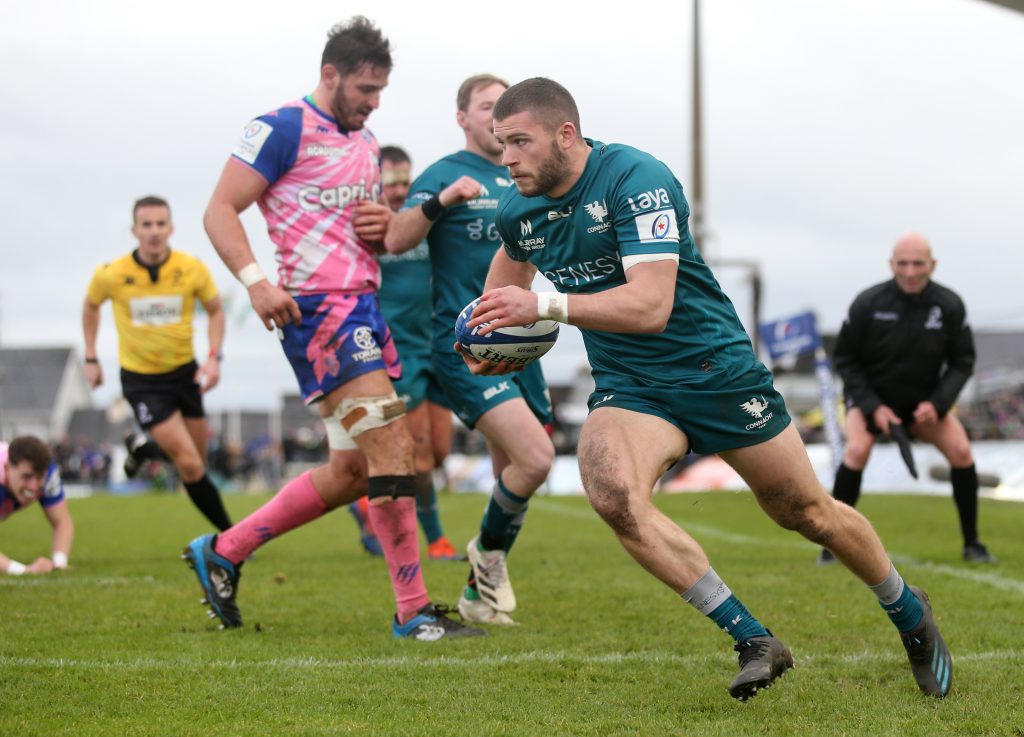 Replacement Masterson got over in the corner in the 69th minute, with Stade having failed to deal with a Kieran Marmion grubber kick. Carty’s conversion made it 26-9.

Three minutes later, Conor Oliver made the initial incision and quick recycling paved the way for Academy talent Kilgallen to coast over for his first Champions Cup score.

Industrious flanker Prendergast fittingly finished off the scoring on the 80-minute mark, muscling his way over for an unconverted effort.