Le Roux on AWJ incident Next
Back
The Rugby Championship

Wallabies coach Dave Rennie knows his maiden Test win comes with a card-riddled caveat, not that he needed an excuse to demand more against Argentina in a fortnight. The two-time Super Rugby title winner is used to success and after a draw and two heavy losses admitted their 24-22 defeat of the All Blacks in Brisbane was some relief.

The breakthrough came with both sides down a man from red cards for high tackles in the first half, while both were also down an extra player thanks to separate yellow cards either side of halftime.

Coming off a record 43-5 loss in Sydney, the Wallabies scored two tries to New Zealand’s three but deserved the victory after converting pressure into points through surprise No.10 Reece Hodge’s boot.

Rennie was happy with the output of debutant winger Tom Wright, bench forward Angus Bell and even the red-carded Lachie Swinton despite his first-half brain explosion when he collected Sam Whitelock high with his shoulde r.

“There were some curveballs, but I was really proud of the steel that we showed and the impact we got off the bench to seal the win,” he said.

“What it tells us is that if we work hard enough for each other we can get results against anyone.

“But it doesn’t count for much if we don’t back it up against Argentina in a couple of weeks.”

“We’re not getting carried away with tonight; it was a great performance but we’ve got to keep building.”

Rennie’s counterpart agreed that the result – Australia’s seventh straight win at Suncorp Stadium – should be kept in perspective.

“What we’ve seen is a very spirited Wallabies team, but it’s pretty tough to figure out what teams want to do with the game narrowed right down (by cards),” Ian Foster said. 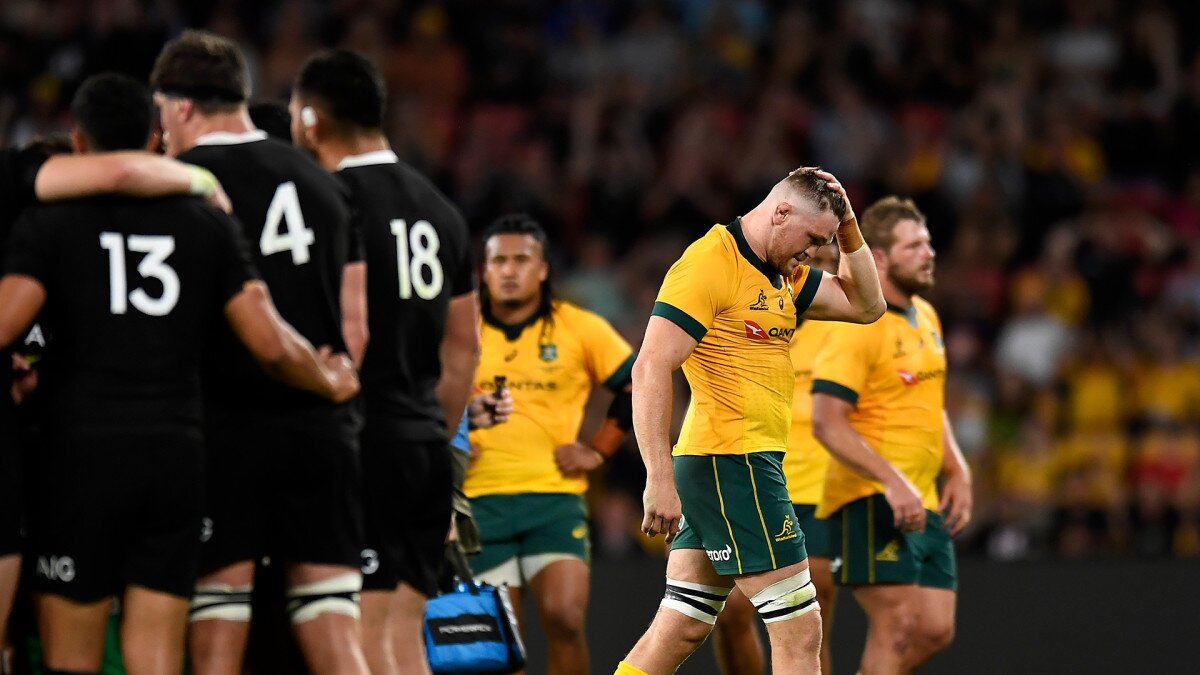 Lachie Swinton of the Wallabies walks off the field after being sent off during the 2020 Tri-Nations match between the Australian Wallabies and the New Zealand All Blacks at Suncorp Stadium on November 07, 2020 in Brisbane, Australia. (Photo by Albert Perez/Getty Images)

“As a rugby spectacle it was disappointing, as a result for Australia it was immensely exciting.

“But what we do know is they want to play a hard-carrying, clean game.”

Reece Hodge was blemish-free after his surprise shift to the No.10, setting up Tom Wright’s second-minute try with a chip kick and booting five-of-seven off the tee.

James O’Connor, Rennie’s first pick for the opening two Tests before injury, should be fit to return against Los Pumas while Noah Lolesio bounced back from a forgettable debut to play confidently off the bench on Saturday.

“He (Hodge) was really good; as we know he can kick from a long way out … create some scoreboard pressure,” Rennie said.

“We’ll have a decent look at it, he’s (O’Connor) been excellent in the first two Tests so it’s good to have choices (at five-eighth).”

James Slipper (elbow) was a first-half casualty in his 100th Test while winger Marika Koroibete made up for his yellow card with a barnstorming effort on both sides of the ball.